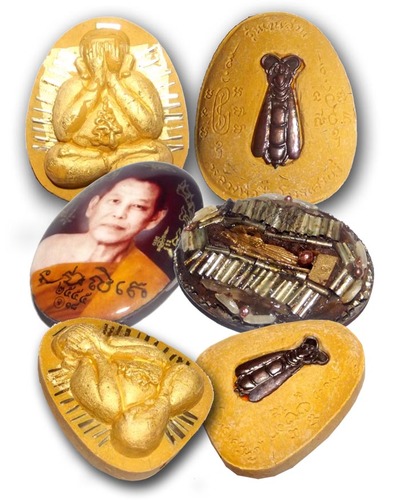 Special Gammagarn Collectors Set pf Three Amulets from the Serp Dtamnan Luang Phu Noi Edition, by Luang Por Jerd. This set contains 3 Luxurt masterpiece Amulets which were not made available in the standard series and were only obtainable by purchasing the 3 set Gammagarn issue, of which only 100 sets were made in all.

In addition, the two Sacred Powder Pid Ta amulets in this set are made in light colored Golden Herbal Puttakun Powders with Gold Leaf, which do not exist in the rest of the series of amulets.

Only the Gammagarn set has Golden Colored Pid Ta Amulets, in 'Nuea Wan Pised' a concentrated rich Mixture of the Finest and most Sacred Herbal Powders. The rest of the Pra Pid ta Amulets in this Edition, were all made with Black Powders. The Gammagarn Collector Luxury Models are therefore instantly recognizable, and Impossible to Confuse with the rest of the Series.

The Special Collector Set is Composed of; 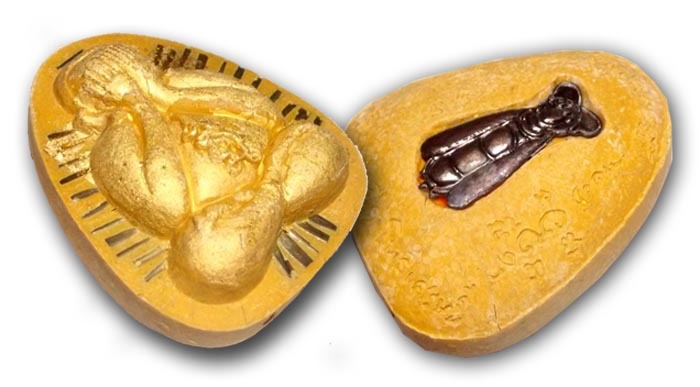 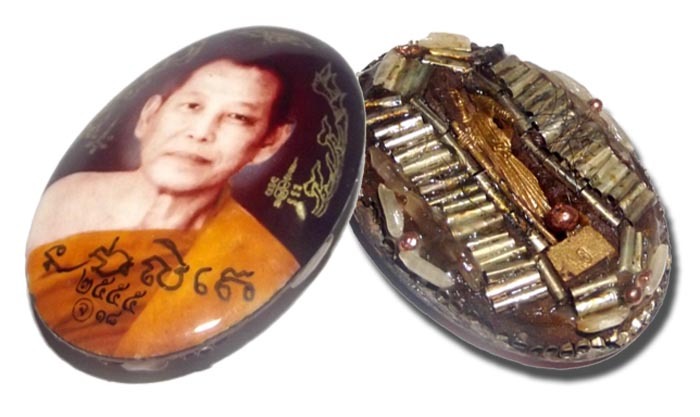 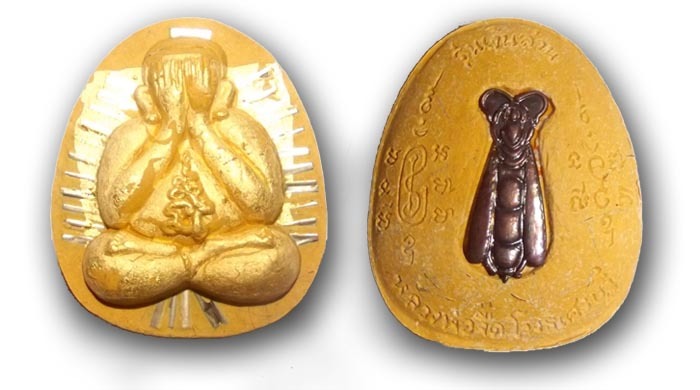 A collectors Set for the Connoissseur that is destined to become an Extreme rarity, and is Expected to Increase Heavily in Value as Time Passes. This is not a set that will be available at any time in the future except for when speculators put it on the market at extremely inflated prices, for which reason we recommend this set to serious collectors of fine rare amulets, and of course to those who wish both top quality and also high Sacredness.

In additon some special treasure Bee amulets with a Pid Ta on the back of the Bee, were given out, exclusively to those at the empowerment ceremony.

Despite the fact that Luang Por Jerd is a Humble Monk, his Humility and Diligent Practice and Merits have elevated him to become one of Thailand's Most Respected Monks on a National Scale, and one of the Top 4 Monks of the Nakorn pathom Province (Along with Luang Por Sanya (Kong) of Wat Klang Bang Gaew, Luang Phu Yaem of Wat Sam Ngam, and Luang Phu Ap, of Wat Tong Sai. We should perhaps say 5 Great Monks of Nakorn Pathom, as the Abbot of Wat Pai Lorm, 'Luang Pi nam Fon' is producing Fine Buddhist amulets in the wake of his Mentor, Luang Por Poon, but we personaly feel that Luang Pi Nam Fon is not yet an Older Highly practiced Master, rather, is on the way there, but still young, and has perhaps the connections of artistic designers and artisans to make fine amulets, but not yet the experience to be an older Master Monk with great Wicha. So we prefer to name 4 Great Monks of Nakorn Pathom, and rese4rve a seat for Luang Pi Nam Fon as he develops his trajectory.