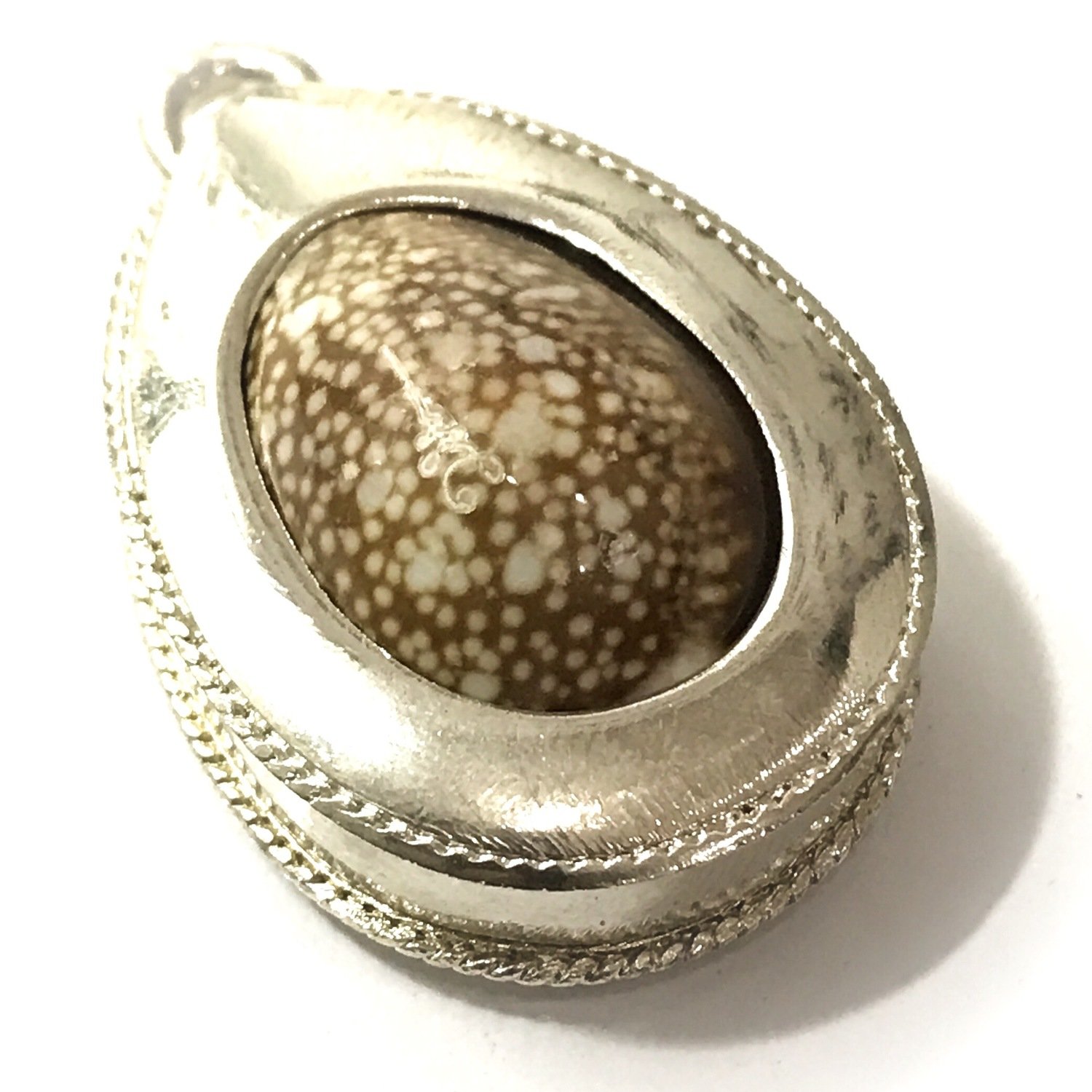 The Bia Gae shell has been constructed using Parot (Brort - a kind of mercury sacred element), and the proper kind of 'Bia' shell needed to be powerful (32 teeth), and posses the Bia Gae spell. The amulet is then inserted and encased with a filigrain engraived solid silver casing, which has been fashioned with one central hoop to attach to a neck chain, keychain or other accessory. Made for LP Juea's (deceased) 84th Anniversary.

The Bia Gae has been a popular folk amulet for hundreds of years, and is an ancient Wicha for with Luang Phu Jua jas continued the honor of his predecessor and mentor, Luang Phu Bun, and maintained the fame of Wat Klang Bang Gaew temple as being the number one maker of powerful Bia Gae amulets. 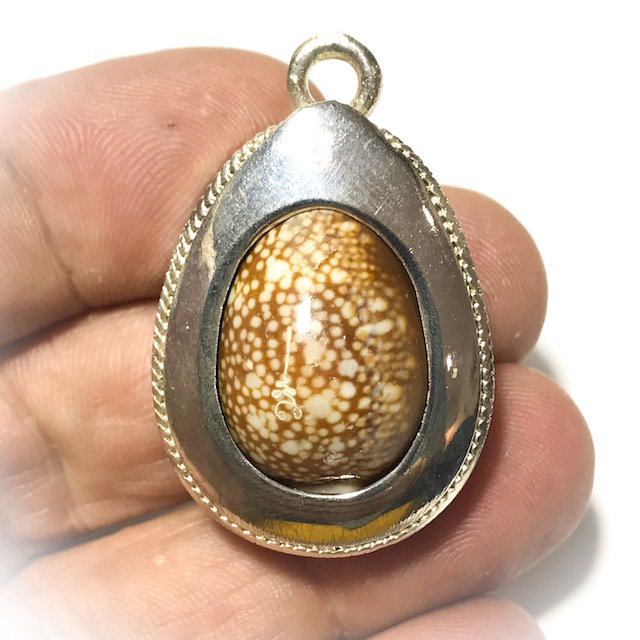 Luang Phu Juea's Bia Gae have now attained such fame and popularity that they no longer stand in the shadow of those made by Luang Phu Bun, his Mentor, with the only true difference between the two generations of Masters being that Luang Phu Bun's amulets are ol;der and more highly valued in the collector market, which in no way says anmything at all about the miracle power or sacred value of the amulets, rather is a simply worldly and aesthetic evaluation which is restricted to a very small scope controlled by a strict set of rules and conditions, which seek to register amulets of competition grade only.

The rear face is embossed with the inscription of Yant Putsoorn (5 Dhyani Buddhas Yantra) with the Sacred Khom (Khmer) Agkhara Kata 'Na Mo Buddhaya'. Hand made Spell Inscirptions from Luang Phbu Juea are visible on the rear face.

Bia Gae by Luang Phu Juea are the present days most popular and believed to be the most powerful available (this is of course arguable, and a matter of opinion, but one must accept that when popular opinion outweighs one amulet over another to such an extreme level as is the case with LP Jueas Bia GHae, then there must be more of a reason for its success, than simple coincidence. 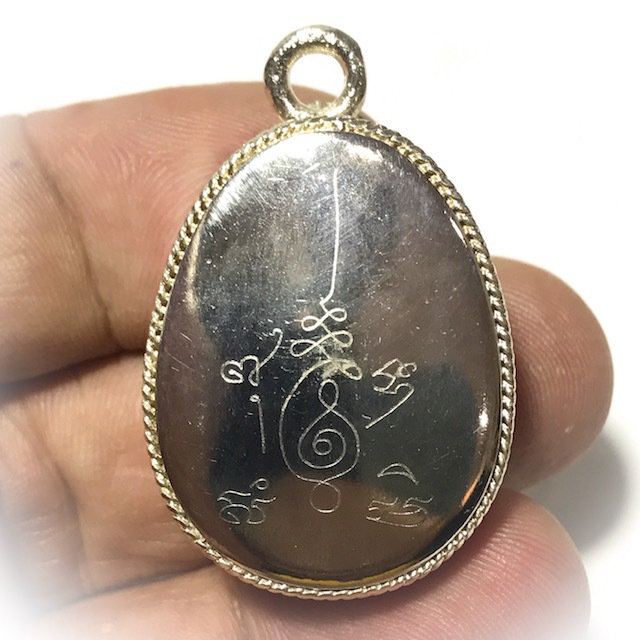 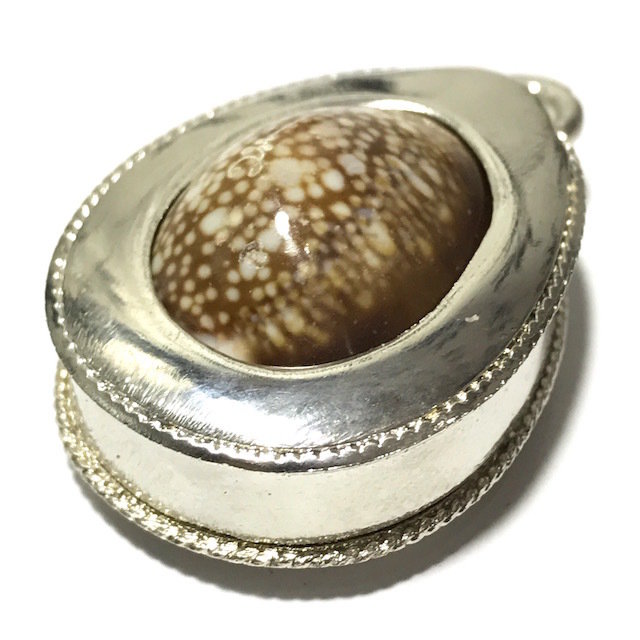 This amulet is unisex, and apart from inducing an increase in moneyflow, also protects against even the fiercest black magic, and supernatural forces, dark spirits and ghosts. Also provides protection from physical harm with strong Kong Grapan magic.

Luang Phu Juea Biyasilo is Abbot of Wat Klang Bang Gaew and the fourth of a lineage of Grand Master amulet makers, preceded by Luang Phu Juea Bpiyasilo, Luang Por Perm, and Luang Phu Bun. His amazing Ya Wasana Jinda Manee sacred powder mixture, and the many classic powder amulets he makes with them have now attained as much fame as his predecessors for powerful Bia Gae Jon amulets, and his special Takruts. His powder amulets remain faithful to ancient Thai Buddhist Art and reproduce the most classic and Eternal Buddhist amulets, such as the Jao Sua, Nang Paya