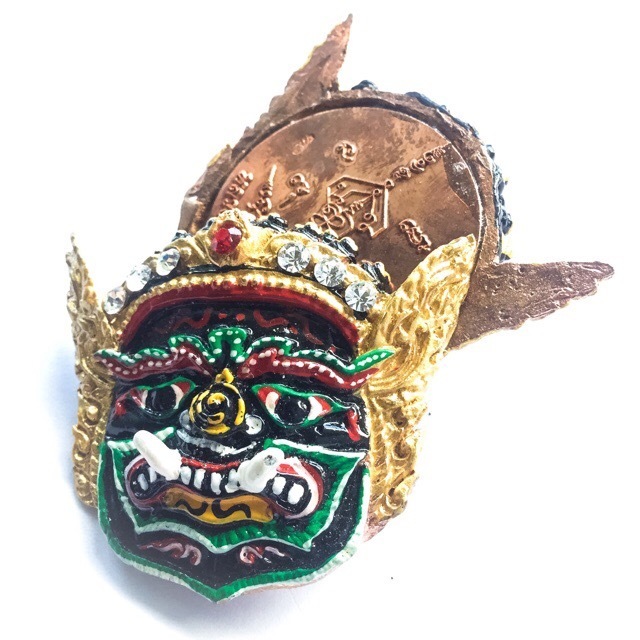 Pra Pirab HImself is Inherently Imbued with Maha Amnaj (commanding power and influence), Gae Aathan and Serm Yos Power, and is especially powerful Deity to watch over, guide and protect those in the Performing Arts Proefessions, Musicians and Dancers, as well as all Magicians. 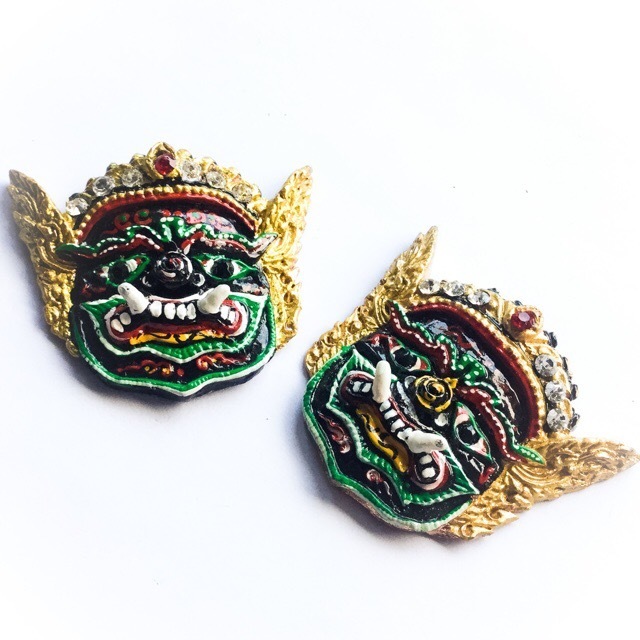 He is seen present in many great Wai Kroo ceremonies, and is the official Mascot of the Wai Kroo of Performing Artists along with a number of other Major role playes in the Pantheon of 'Duriya Taep' performing Arts Heavenly Devas 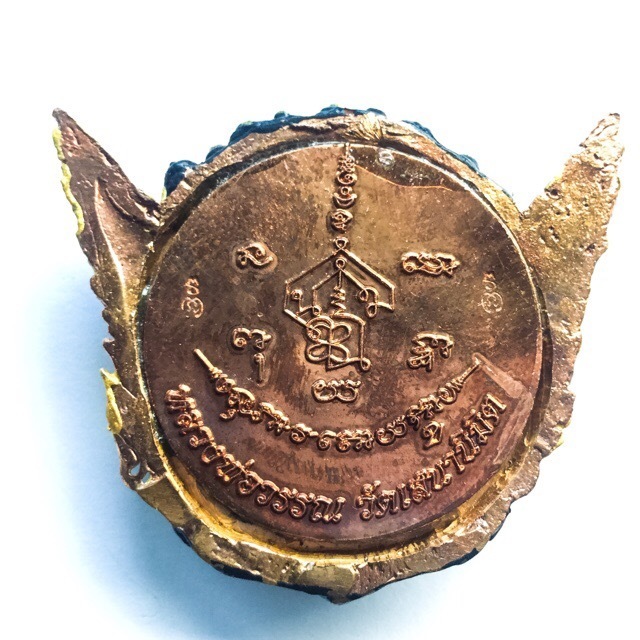 The rear face has a very rare and lesser known Yantra spell from Luang Por Wanna, that covers the back of Pra Pirab, and completes the Wicha with a Seal to protect and Contain the Power within. In the below youtube video, you can see a demonstration of the construction of the bones of this Yant (contours) and the Kata Below it, made by Ajarn Spencer Littlewood for your interest and enjoyment. 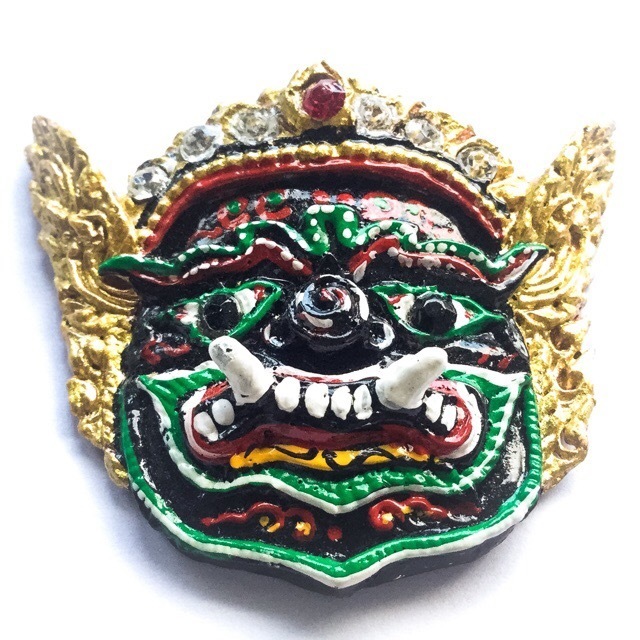 The Yant Invokes the Yaksa and commands them with Secret Incantations. They are commanded to assist and protect and to swipe enemies out of the way, clearing the way for success.

Pra Pirab is a Powerful High ranking Royal Member of the Asura Realm Pantheon of Deities, and is known to be the Guru of all Performing Artists and Musicians. Pra Pirab is a very Powerful Magical Emanation, and possesses Maha Amnaj Power to produce 'Serm Yos' (Improve Status), and Impose Commanding Influence over others. Pra Pirab also Destroys Enemies and Backstabbers, much like the Eclipse God 'Pra Rahu Asura Deva'. 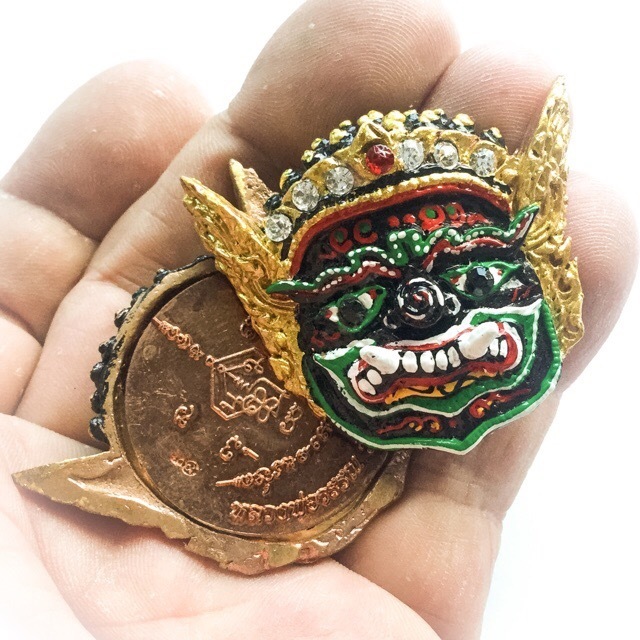 Pra Pirab is the Highest Kroo of the Dancing Arts and the Musical Arts. He has various different names, the Original coming from the Indian 'Bhairaba'. As the Hindu Brahman Faith entered into Siam, the people of Siam adopted their Dance, Theater and Literary Arts, and adapted them by changing the artistic interpretation, style of regalia and their Names. 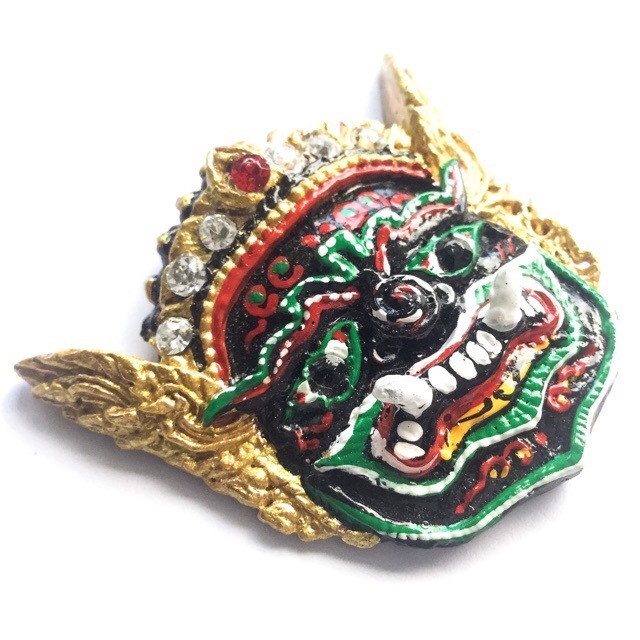 Hence, 'Bhairaba', became first 'Pairab' and later slowly transformed into 'Pra Pirab'. Historically one can see Pra Pirab appear in Thai Performing Arts and Ritual Ceremonies documented, from about the time of the Ayuttaya Dynasty. The ritual worship of Pra Pirab was first seen to be commonly widespread during the time of the 2 King of the Chakri Dynasty. 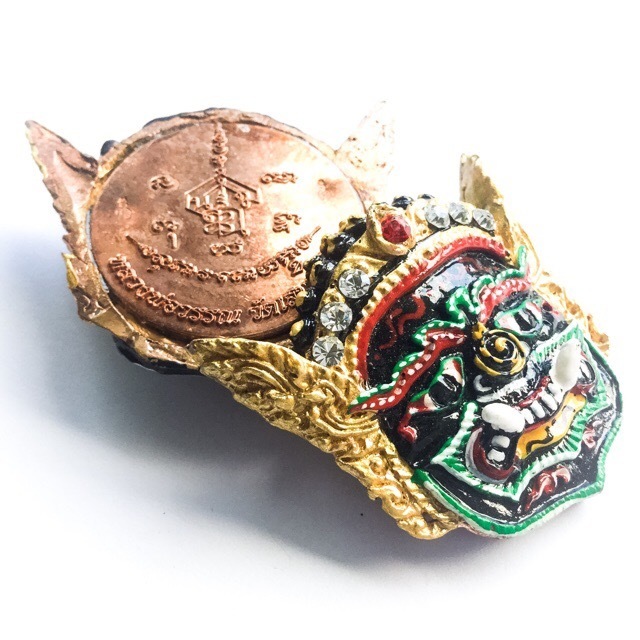 It is believed that Pra Pirab is actually an emanation of the Lord Shiva himself, but is often mixed up with another Yaksa who appears in the Thai Ramakien Myth (adapted from India's Ramayana Myth from the Hermit Valmiki), who is named 'Wirat' or 'Pirat' and his name has often been re-written as 'Pirab'. Wirat was a Major Protagonist in the Ramakien Tale, and was a practitioner of Astrology, and Wicha Yant 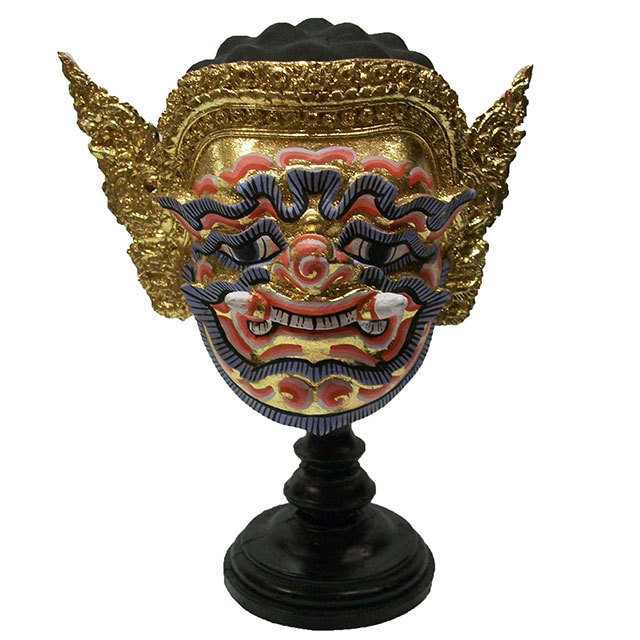 The most important aspect of taking a Bucha statue of Pra Pirab Deity into the home or temple, is that for taking it in the home, you must erect an altar (or small place allocated for Bucha) and Bucha offerings to Pra Pirab on the first Thursday after taking it in;
Four eggs (uncooked), one cup of popcorn, one small cup of honey, flowers or ‘puang malay’ (flower garlands) – make sure that at least three different colors of flower are included in the offering. 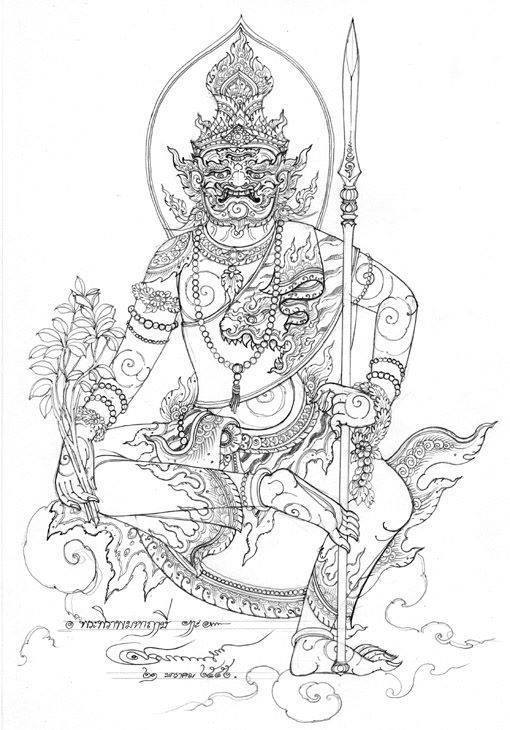 Place them all on the ‘Pan Kroo’ or other kind of offerings tray, and light five incense sticks, and two candles. Chant the Pra Radtana Dtrai first (starting with Idtipiso till ‘Sawagkhaadto’) Then chant the Kata to call Pra Pirab to accept the offerings; 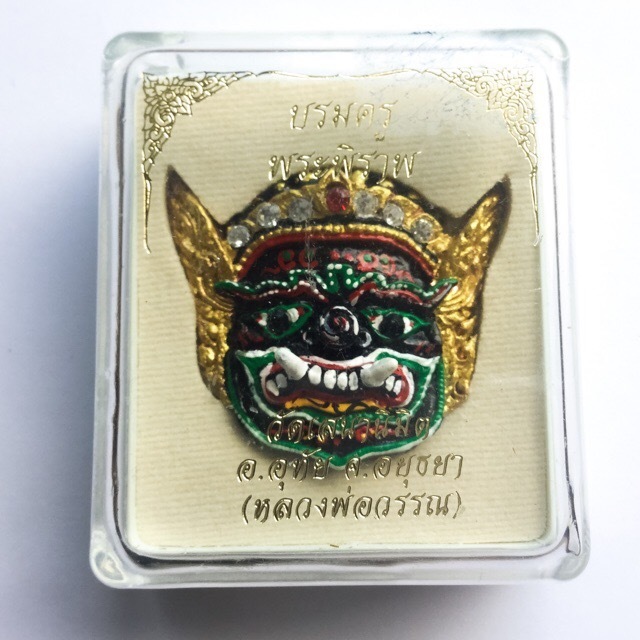 After this, say the following;
“I (say your name) ”ask to be a son and devotee of the Boroma Kroo Pra Pirab, and that Pra Pirab will have Metta towards me and bestow me with blessings of Luck, Fortune, Riches and Power, in addition protecting me from Magical attacks and evil beings". 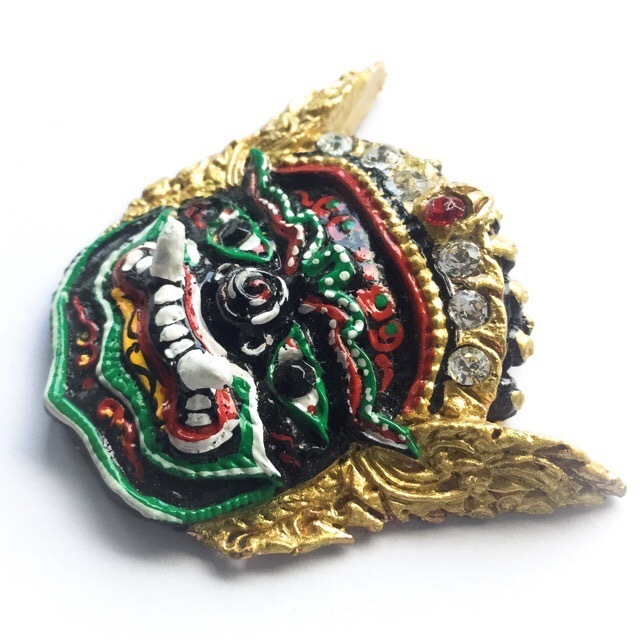 The Kata above is only for chanting the first time when you offer the ‘Krueang Sangweuy’ (Bucha offerings) – It is of extreme importance to do this the first time when you have the Deity in your house or temple. If you do this the first time, the benefits will be very great, for it is common knowledge that Pra Pirab is a very powerful Deity indeed. Once you have done this, then the frequency with which you make Bucha depends on your own strength of Faith and diligence. Remember always that Thursdays are the best day for making Bucha to Kroo Deities. 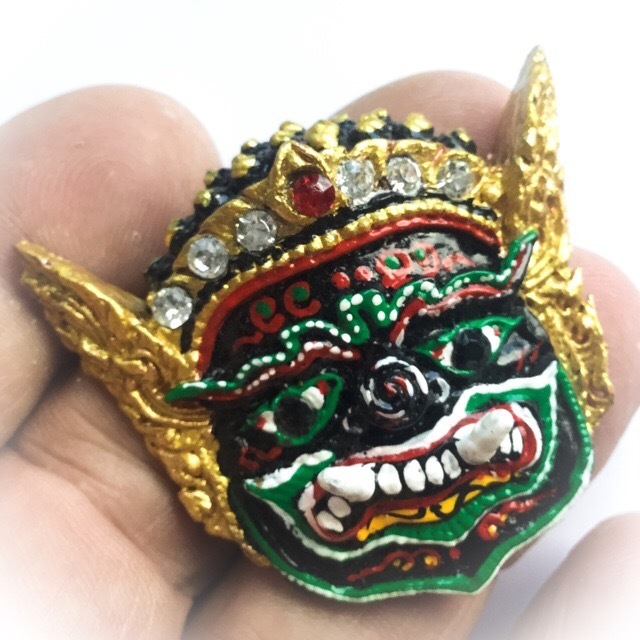 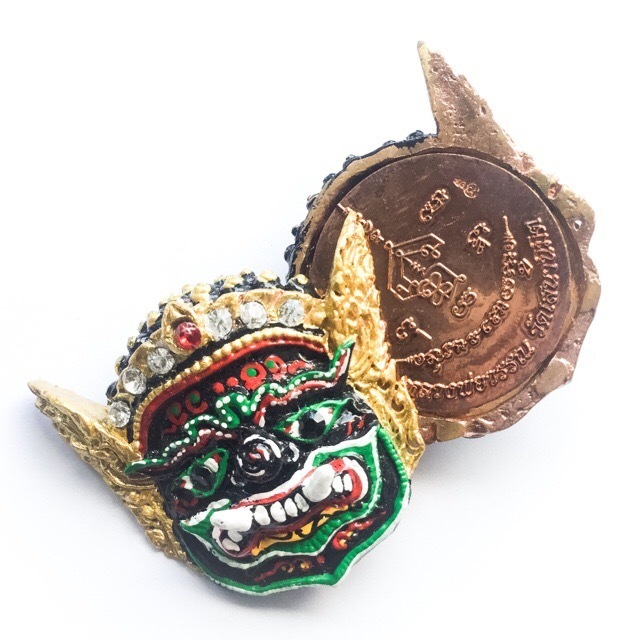 When you chant to Pra Pirab, think of the Buddha, Dhamma, Sangha, Mother and Father, Brahma, Shiva and Vishnu, and finally, Pra Pirab Kroo Deity – and think of all your Kroo Ba Ajarn and their preceding Kroo. As you do this you should ‘Adtithaan Jidt’ (focus your mind and make a request/wish) and wish for the Kroo Deity to protect and guide you. If you wish for luck, riches or love or whatever, you should then also use this opportunity to ask for whatever other blessings you may need. 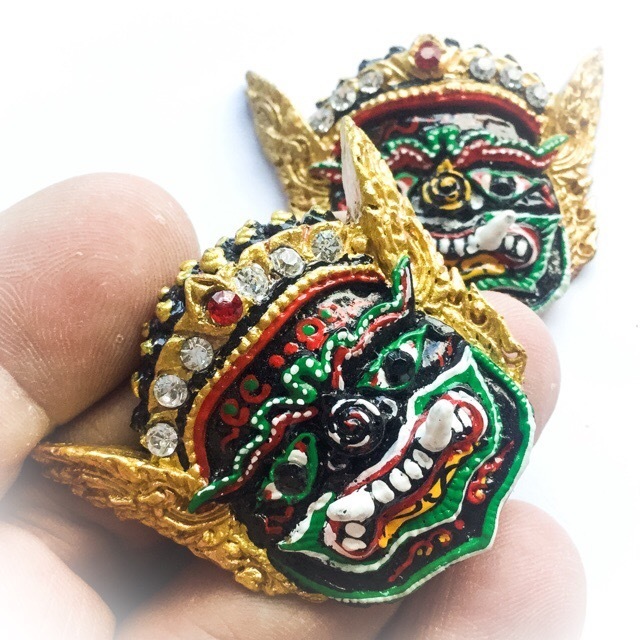 When you make merits, you should offer fruits of those merits to the Boroma Kroo Pra Pirab too, which will result in the Deity bestowing immense blessings on you. You must offer the fruits of your merits truly and with full heartedness, not just say words, if you can do this, the results will be sure and auspicious. 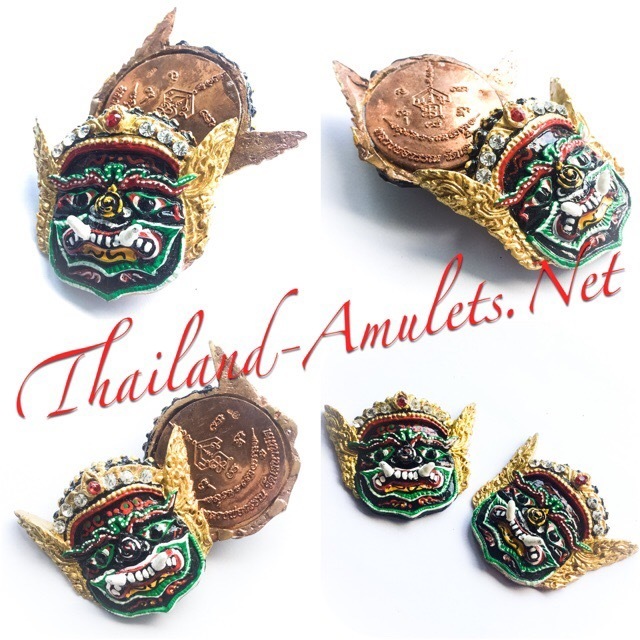