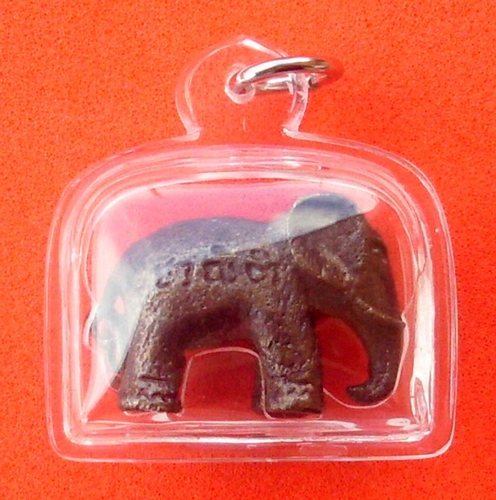 Chang Mongkol empowered by Luang Por Phern of Wat Bang Pra. Issued in 2540 BE, this charm encompasses all areas of Puttakom Magic endowing the wearer with Amnaj, Maha Sanaeh, Chke Lap, Kong Grapan, Klaew Klaad, and Gan Aathan all rolled into one. This is due to the various Meritorious and Sacred meanings which can be applied to the image of an Elephant, be it Erawan the 33 headed elephant on which the Indra Deity rides, or be it Chang Pueag the white elephant which represents a Buddha or great Master, as well as being a sacred symbol of Siamese Culture. The Buddha once was born as an Elephant who gave away his tusks to a hunter out of compassion..

The elephant is a Brave and almost indestructable adversary in battle, and thus commands great power in the wilderness, which is what lends power to the wielder of this amulet in his or her professional or social enviroments.

The elephant is a kind and intelligent being, who lives at least as long as a human and longer, and has a very long memory - this endows the wielder of the amulet with cleverness, and discrimination with compassion also generating the same in others resulting in favorable circumstances (Metta Mahaniyom and Choke Lap).

The elephant, although large, is higfh and has a good overview of the long grass, and can foresee many dangers that other animals cannot. This endows the wielder of this amulet with Klaew Klaad, evasion of dangers, which are foreseen by the elephant effigy which will find a way to warn you. It would not be surprising if the amulet even vibrated against your skin when danger approaches! This thing sometimes happens as a warning of forecoming ill wishers, dangers etc.

Luang Por Phern is a Wolrd Famous gaeji Guru Master whose passing has left the temple with many of his student monks still tattooing sak yant Buddhist tattoos every day in his honor, and continuing the lineage of his great magical Wicha, which has caused Wat Bang Pra to become the Mecca of Sak Yant with millions of Looksit around the World.