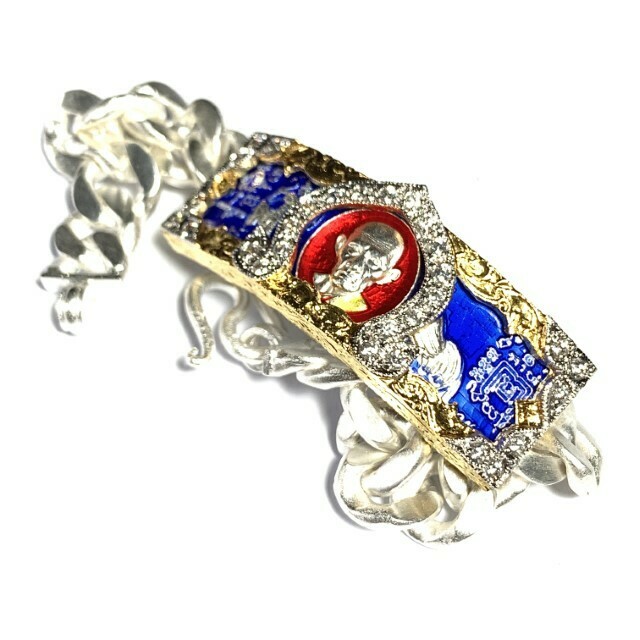 One of the most highly sought after preferred items of the pantheon of the Late Great Luang Por Ruay, for devotees and serious collectors of this Great Master Monk, is the Gamlai Ngern Magical Sacred Bracelet. This exhibit is a special Ongk Kroo model Gamlai Sorn Rit Ruay Ruay bracelet, from 25557 BE, with the God Rama (Vishnu Avatar) holding the Molee Bow and Brahma Sastra Arrow poised to shoot on one side of the sacred bracelet, with Gai Gaew Crystal Cockerels, flanking the Cameo image of Luang Por Ruay on the other side, with Sacred Yant. The edition information and other inscriptions are engraved on the rear side, with year of release, and individual limited edition series number. 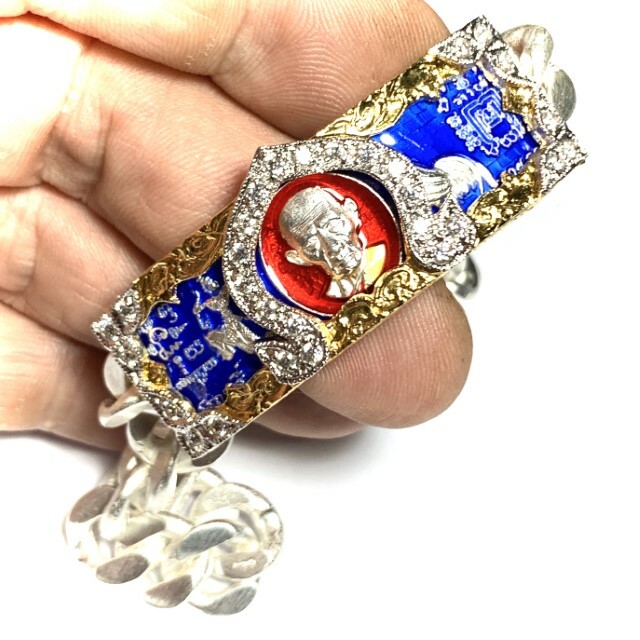 This exhibit is in solid silver, and is a large version weighing 60 Grams including the extra custom frame that has been wrapped around the bracelet to further embellish it. The bracelet, is a special Ongk Kroo version, in Nuea Ngern Long Ya Rachawadee, enameled solid silver, with special custom frame. These bracelets were made in extreme limited numbers, in the Sorn Rit Ruay Ruay 'Arrow of Power & Wealth' edition, of Luang Por Ruay, of Wat Tago. The bracelets were made in slim and thick models for men or women (or for larger or smaller wrists). 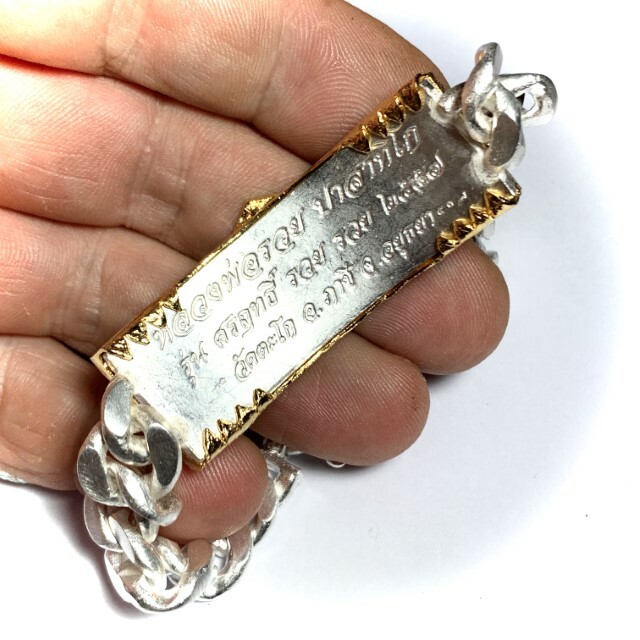 LP Ruay was a Master Gaeji Ajarn of the previous Generation, who was legendary for his attraction charms and protective amulets in the Rayong Province. This amulet was issued after a Traimas 3 Month Rainy Season empowerment, in 2557 BE, and is one of various editions of bracelets, from various years that are among Luang Por Ruay's most preferred and celebrated amulets of all time, along with his Monk Coins and Rings. There is even a giant bracelet in one of the shrine-rooms, that is as large as a motorcycle, so famous and desired are his blessed bracelets. Since his passing in 2560 BE (2017), his amulets have become not only rarer, but have of course also begun to escalate in price as time passes, and are becoming high end collectors items in their own right, Extremely prized by devotees who know of the merits of this monk, and of course, its popularity, apart from the Sacred Value and Magical Power, also comes from the visual attraction to the immense beauty in the designs made for each edition released during his lifetime 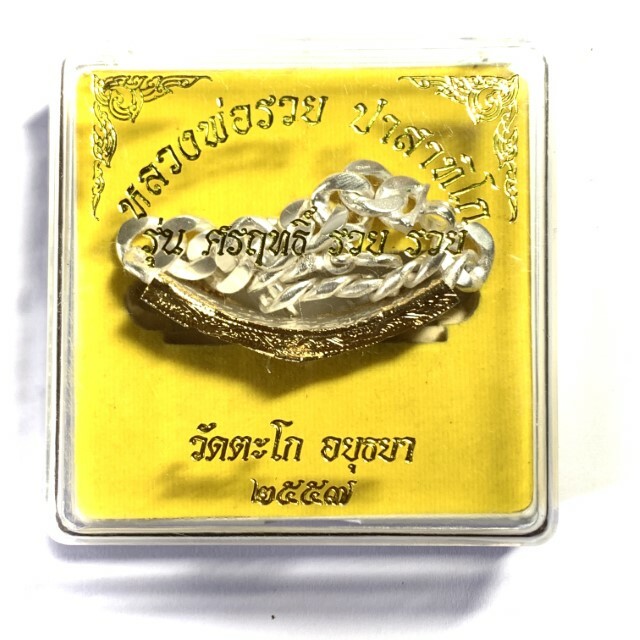 Luang Por Ruay was rather an inimitable phenomenon, because, he is what we would like to call an in-betweener. Having traversed two full generations of masters and their magical Wicha lineages. Luang Por Ruay was first adopted as popular Amulets maker by the new age amulets collector community, without them really knowing of his immensely impressive trajectory, and that he is in truth a Master of Old since many years. 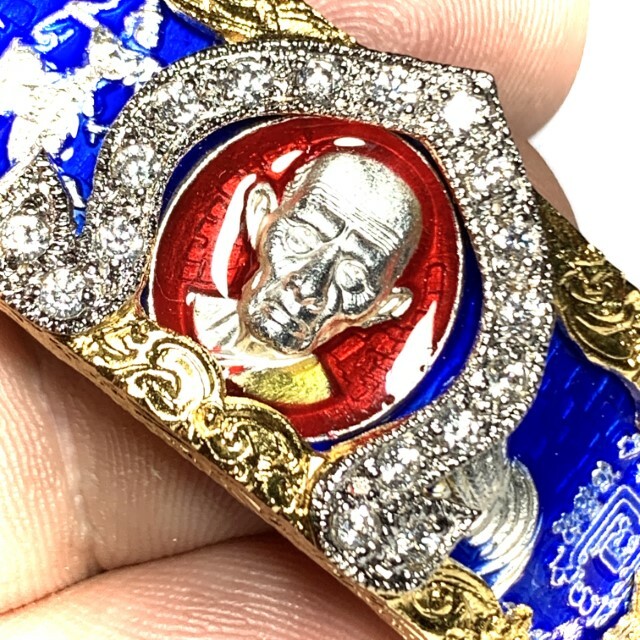 Now, in the few years since his passing, has entered the annals of the ascended Thai Guru Master Monks with an impeccable trajectory that can never be stained. His official editions of the last two decades are well documented, but his earlier amulets less so, such as his talismanic charms (Takrut, Look om etc), but his pantheon of amulets is roughly semi complete as far as catalogues and encyclopedic works are concerned. 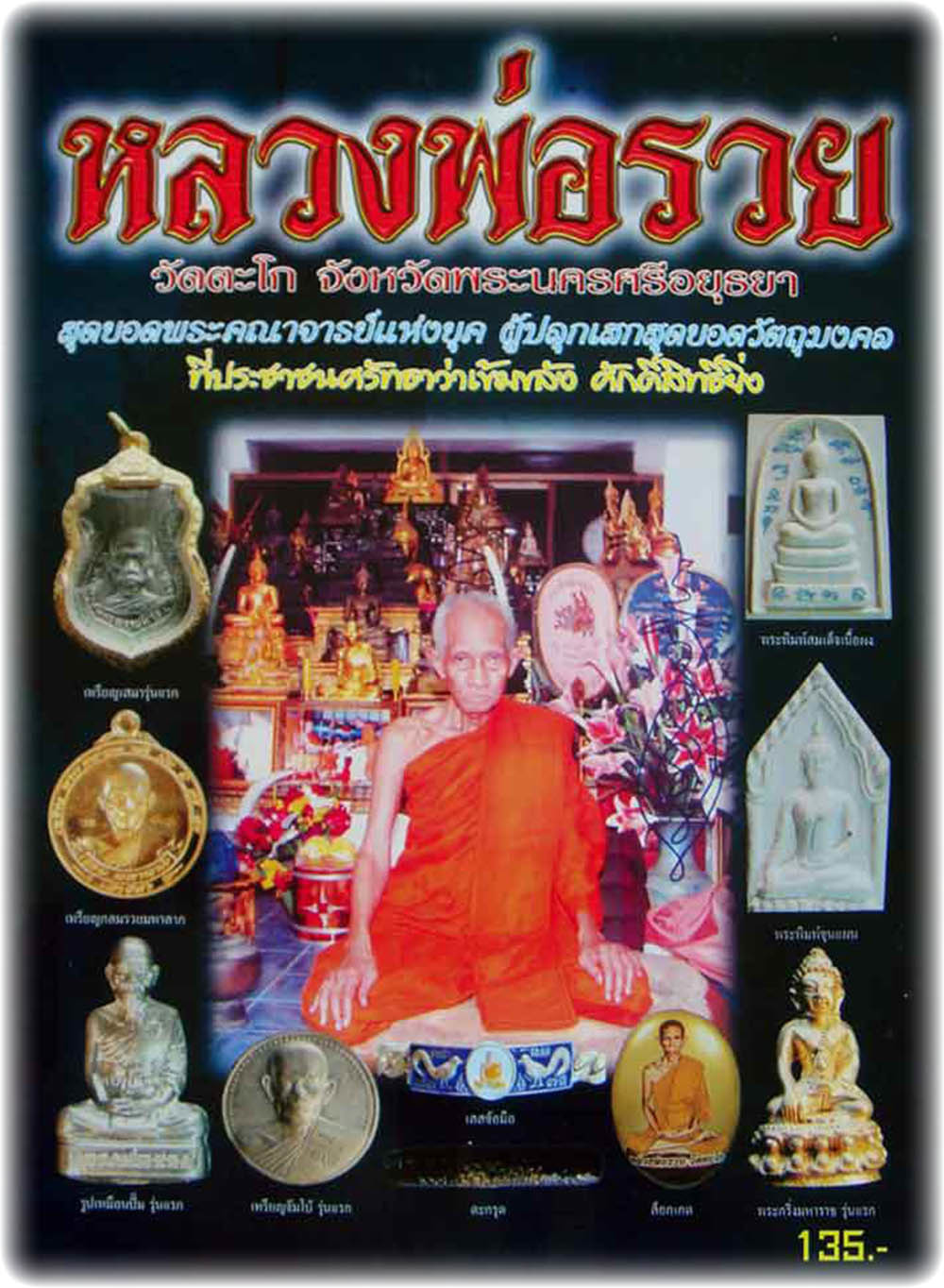 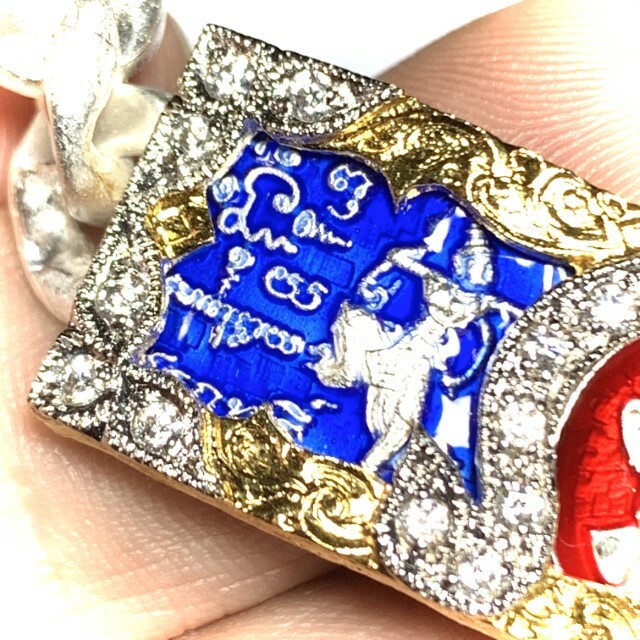 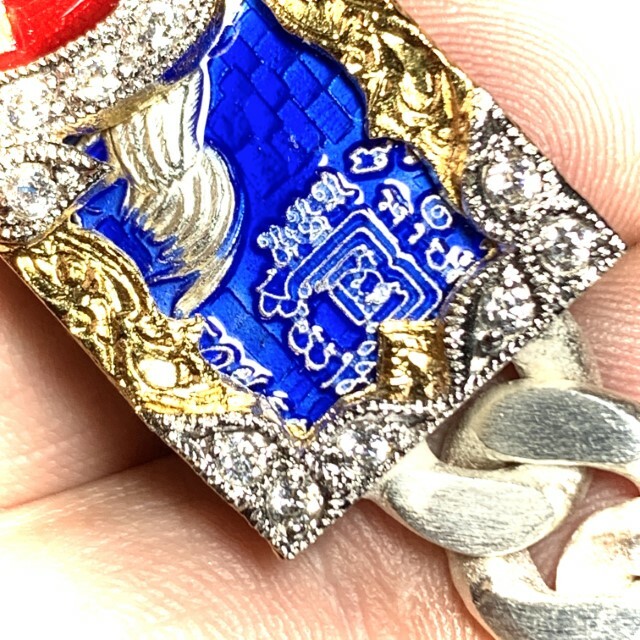 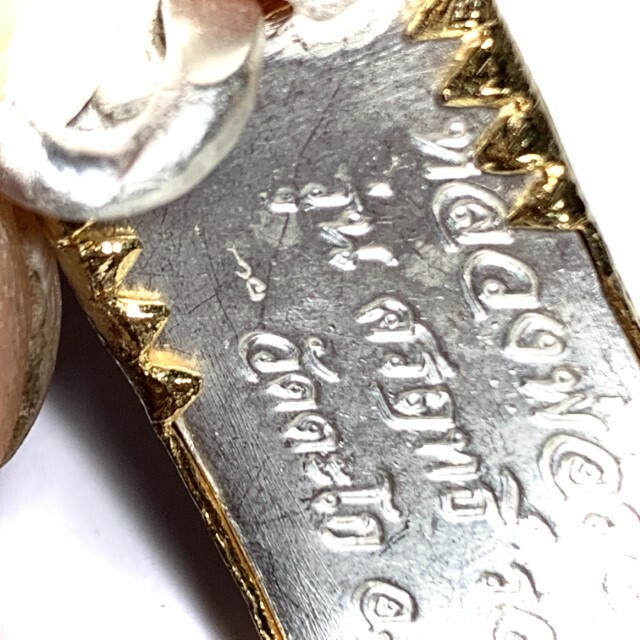 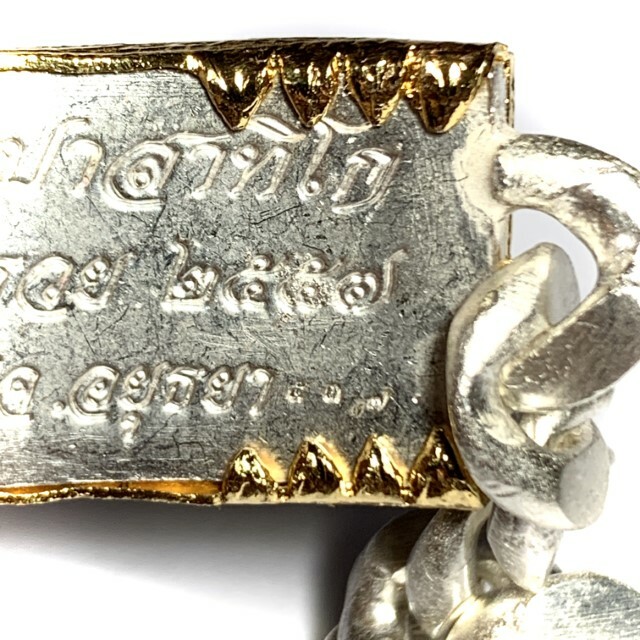 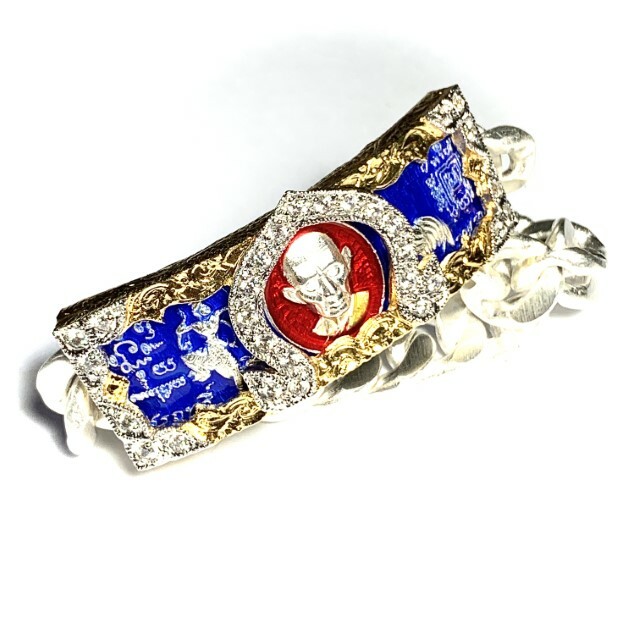 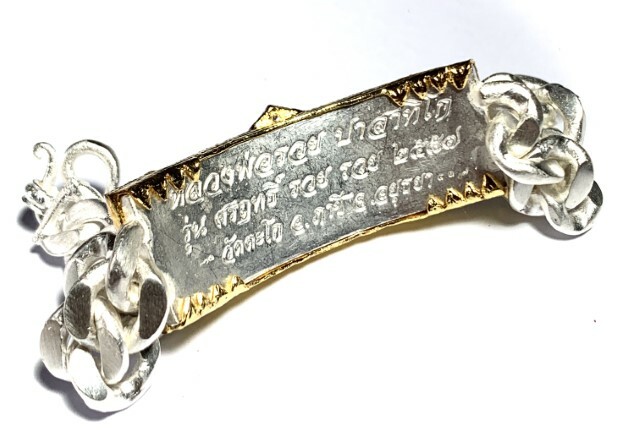 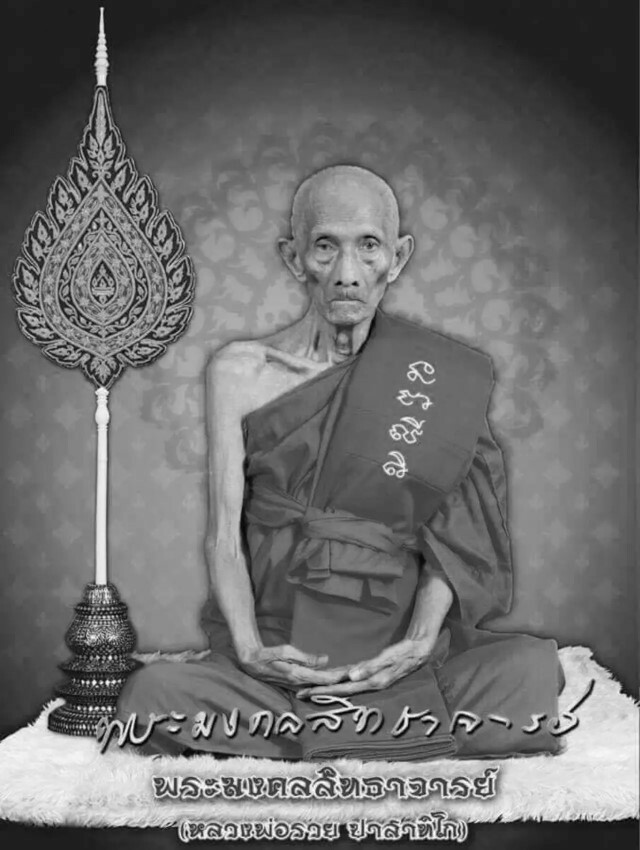 This is part of what makes a classic Amulet become what it is, and attain its status as an amulet of esteemed favor, and eternal presence in the memory of each new generation. We are proud to present the amulets of Luang Por Ruay in our line of recommended amulets from recommended masters. LP Ruay is also one an 'ever increasing value' future investment recommendation, for they will soon no longer be affordable and disappear from availability, due to the immense number of collectors of each edition, and the rarity aspect due to small numbers made of each model. 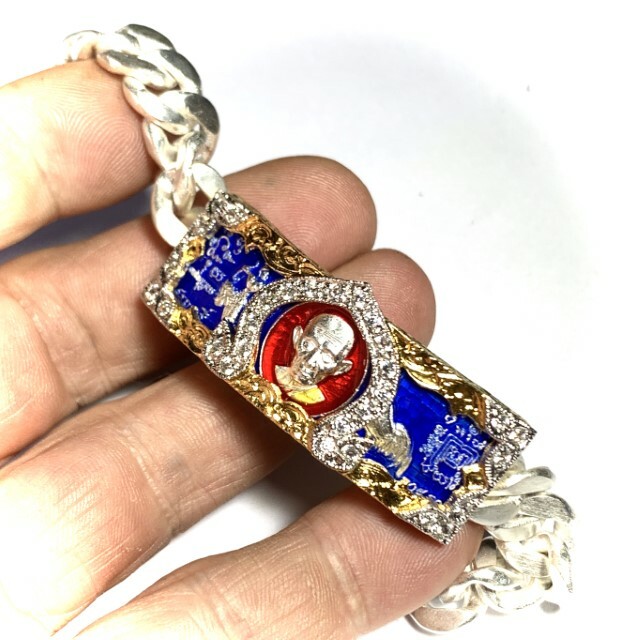 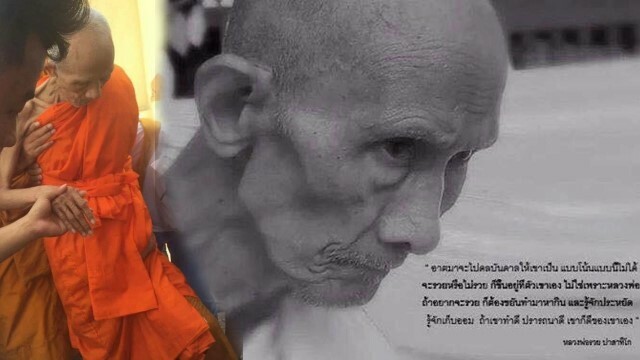 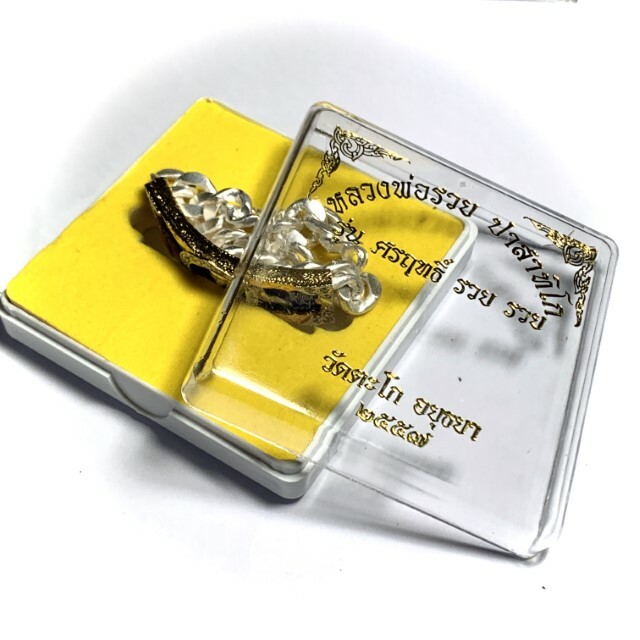