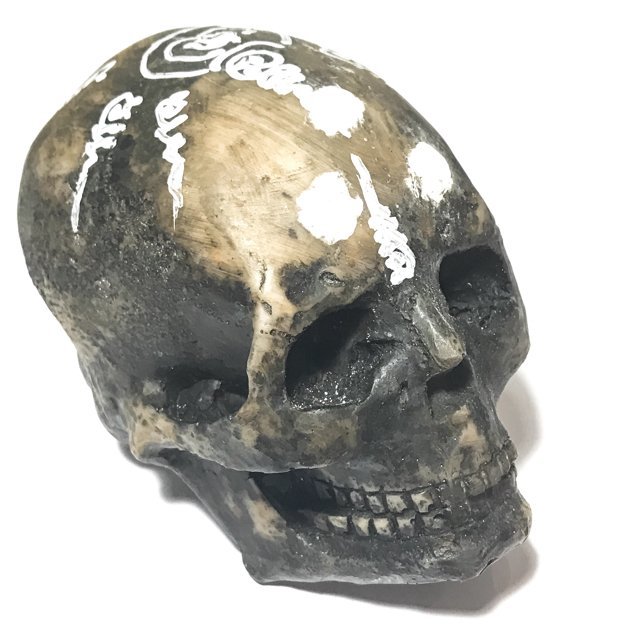 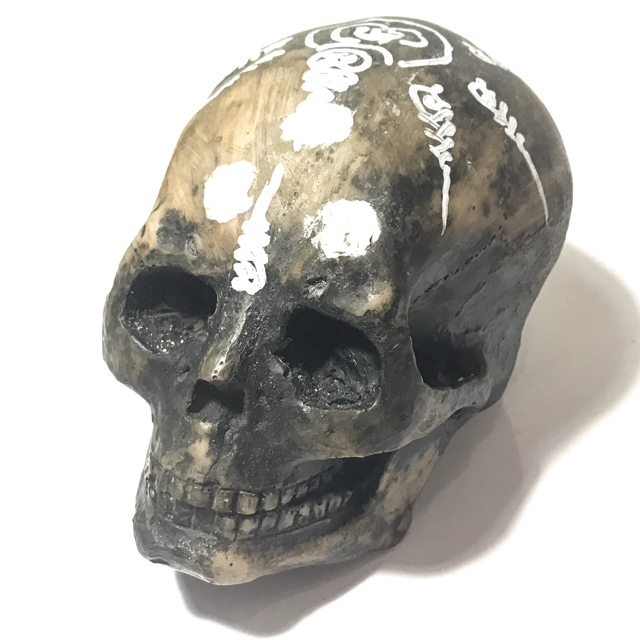 The Hua Pragay itself is a fusion of modern aesthetics and ancient necromantic Sorrcery, with the use of a fiberglass skull for the visual image with which the Human Mind can perform telepathic contact through visualisation, and the insertion of authentic Necromantic Muan Sarn according to the fomulas of spellbinding spirits and reanimation of the souls within inanimate objects and effigies. 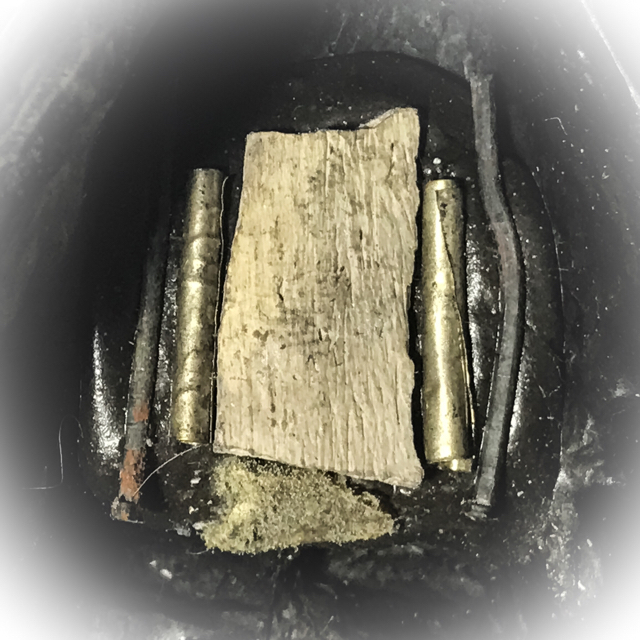 The under side of the skull has coffin nails, a piece of coffin lid, and necromantic Chin Aathan Mortal Remains of the Hoeng Prai Ghost Pragay Mas inserted, and affixed to the interior of the base of the skull. 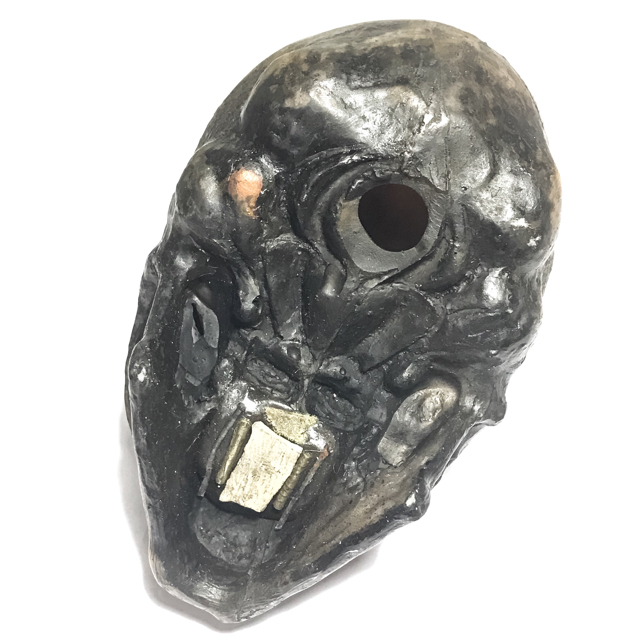 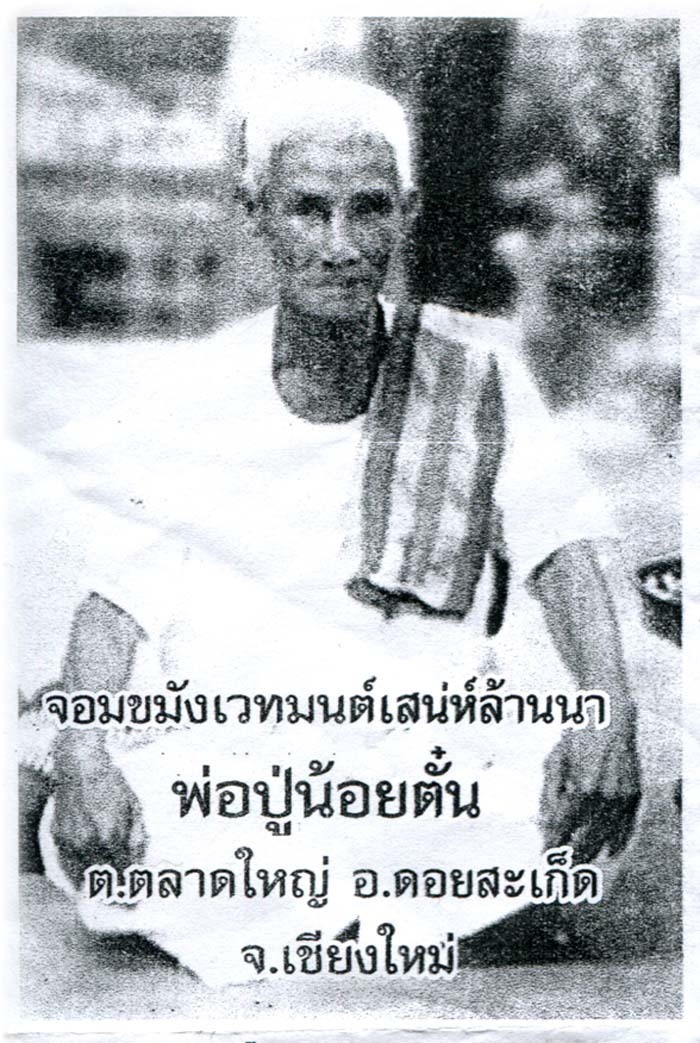 Por Phu Noi Dtan is an Aging Master Sorceror and Necromancer of the Northern Lanna region. He is an Adept at the Lanna Wicha Maha Sanaeh Sorcery, which he learned through the Thai Lanna, and the Gariang (Karen Tribe) Magical Lineage Traditions.

He is very well known for the Pong Sanaeh Mad Jidt Hypnotic Love Powder. He is legendary for his ability to empower Sacred Powders, which are said to be immensely powerful after recieving his blessing, even in their raw form.

Por Phu Noi Dtan is seen to be called upon to be present to empower amulets in some of the largest and most important blessing ceremonies of the Great Lanna Masters and Temples.

As an aged Lay Master, he is seen to be given the honour of being asked to assist in empowerments by some of the Greatest Kroo Ba Ajarn of our Time. His practice has been intense and diligent on the Buddhist Path serving the temples of the Lanna Region, and his powers and mastery of Lanna Sorcery is considered to be the most powerful of all Lanna Lay Masters. Por Phu Noi Dtan is one of the last living members of his generation of Masters. 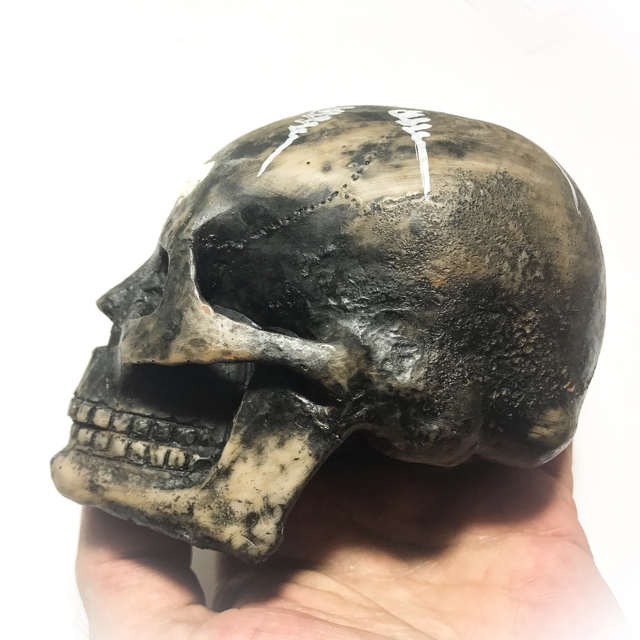 The Hoeng Prai Pragay Mas is naturally endowed with the powers of a Prai Grasip (Ghost Whisperer), which can whisper in your ear and give signs to warn you of danger, and lucky windfalls. Highly recommendable amulet for Gamblers and Wealth Seekers, and those who seek the powerful and accurate forewarnings of good and bad events. 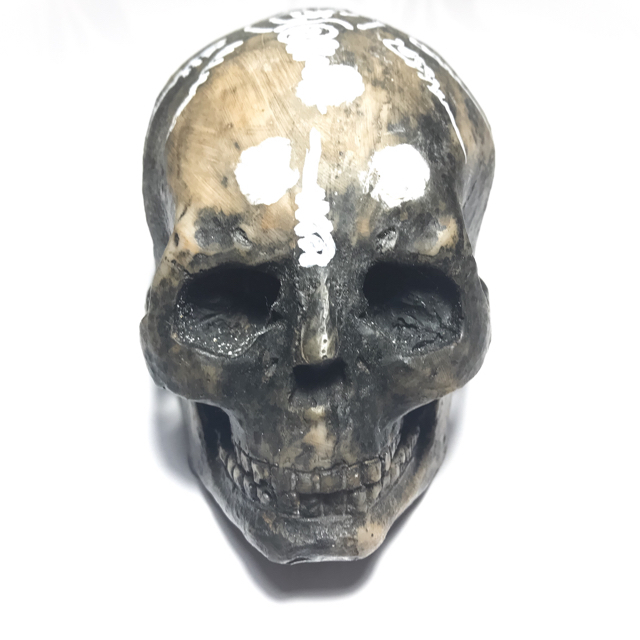 Empowered with Immense Maha Lap, Siang Choke, Prai Grasip, Metta Maha Niyom and Maha Sanaeh Magic. The Hua Hoeng Prai Pragay Mas, is in principle in every sense a Prai Hian type phantom, who is full of Psychic Frenzy, and is primarily empowered for Ultra-Hian Power, most suitable for games of risk, seduction, and nocturnal activities. The Psychic Powers of the Hoeng Prai are both very powerful, and most probable to occur often, as the Hoeng Prai Ghosts love to perform displays of their powerful Magic, Unlike Deities and Celestial Angelic Entities, who must be coaxed into it. 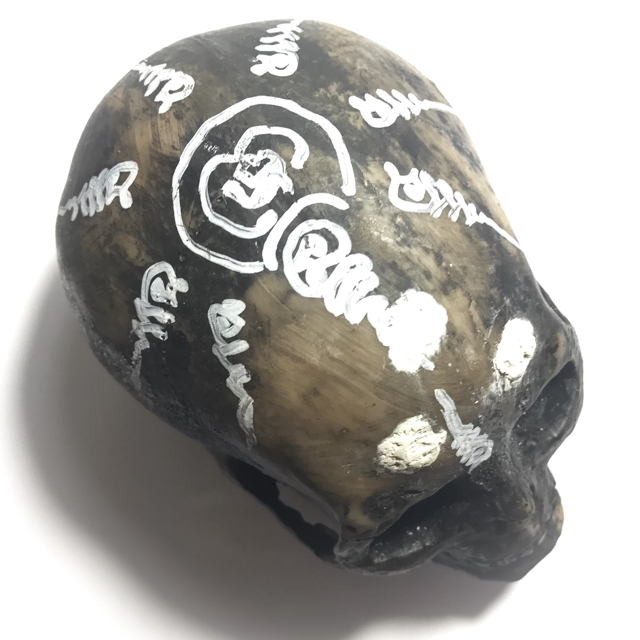 Angelic Deities prefer to avoid Miracle workings unless absolutely necessary. The Hoeng Prai type family of Necromantic Spirits posess of course, the Powers of a Prai Grasip Ghost Whisperer, and can forewarn of dangers, and even lucky streaks in gambles, and winning numbers in lottery. But this Hoeng Prai is in face specifically designed for Prai Grasip Magic, in addition to being naturally endowed with this form of magical power from being a Hoeng Prai Ghost in its essence. 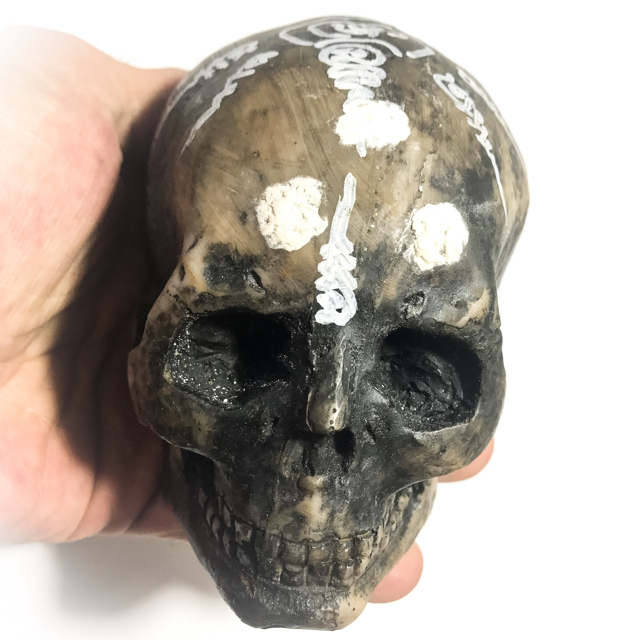 Of Prai Necromantic Khmer Sorcery, it is said to be the only form of Magic which will help amulets to work even if the Karma of the person wearing it is absolutely terrible. Only Necromancy can weaken this power of Bad Fate, it is said. The full formula of Invocations for the Kata Akarn Sam Sip Sorng were performed for reanimation of the spirit within the effigy. This is an essential part of Necromantic Empowerment with all Humanoid and Animal form amulets which are imbued with a resident spirit. The Invocation Summoning, Awakening and Turning of the Four Elements was performed to Reanimate Living Magic within the Static Form, according to the Ancient Grimoires and Magical Formulas of the Wicha. 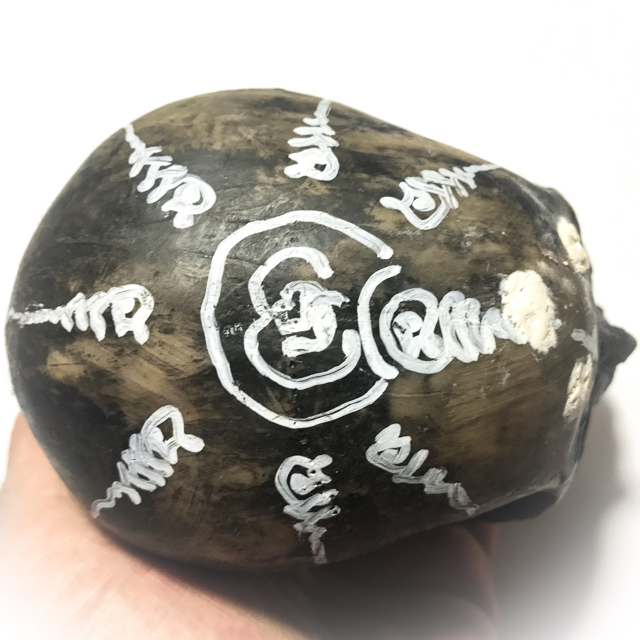 Offer whisky (one small glass), Light one stick of incense, and chant the following Kata 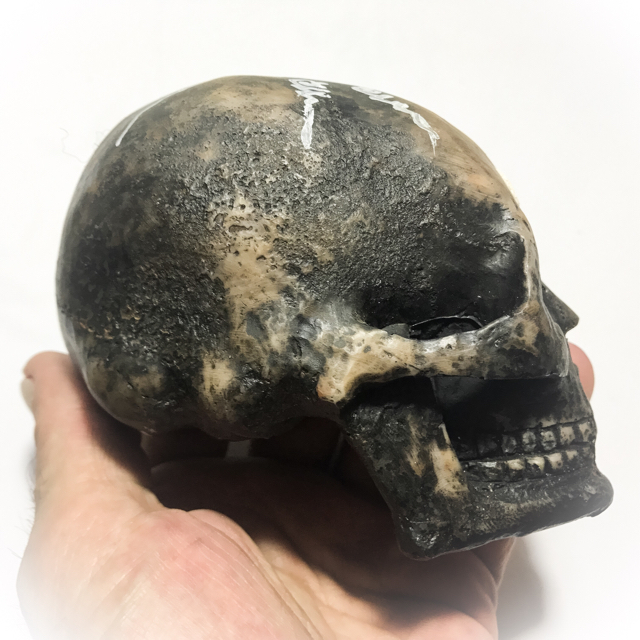 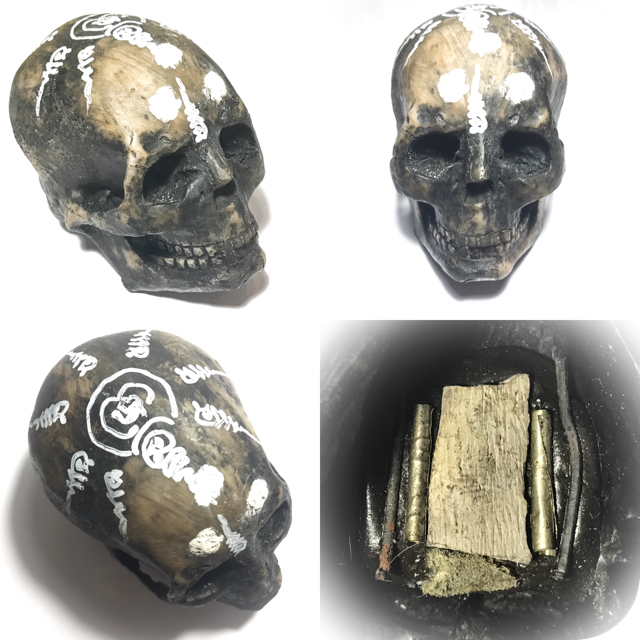