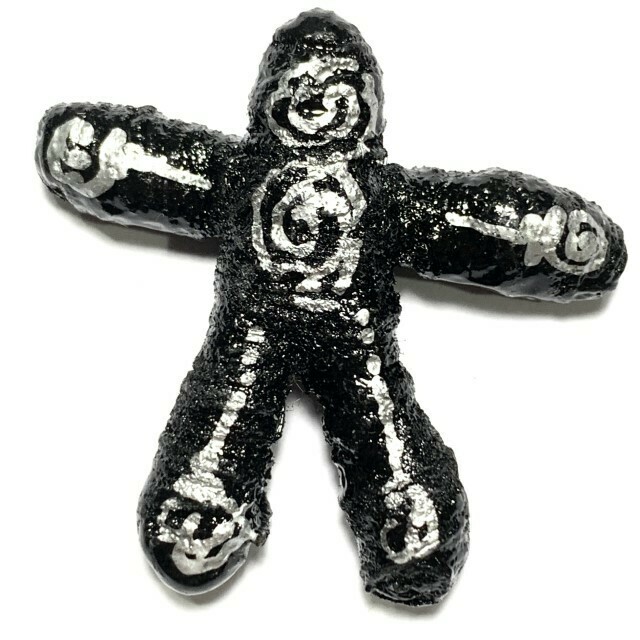 Now an extremely rare item to find, the Hun Payont Taewada Mee Rit Ongk Kroo Animist Spirit Golem Ghost assistant of Luang Ta Chuan, made from Ya Kaa Maha Bpraab with Lacquered surface and Khom Agkhara spell inscriptions, from the 2555 BE Wai Kroo Traimas ceremony. Luang Ta once made Hun Payont to watch over some farm fields of Supannburi, with three regiments of effigies; 1. Land Regiment (Army) - blocks rats and rodents, 2. Air Regiment (Air Force) - blockst birds from stealing the seeds, and 3. Water Regiment (Navy) - keeps the Golden Apple Snail from eating the vegetables and crops. He placed the regiment of Hun Payont in the field, and all the birds, snails and rodents completely disappeared and stopped eating the crops, and even the local thieves who had been stealing stopped coming to steal crops. One day a local villager wandered into the field, and met a large dark skinned man towering over him who walked towards him warning and blocking the way. The villager said he ran and ran but the Giant was everywhere he turned. In the end, he managed to escape the field and ran to tell the tale to the folk in the village. 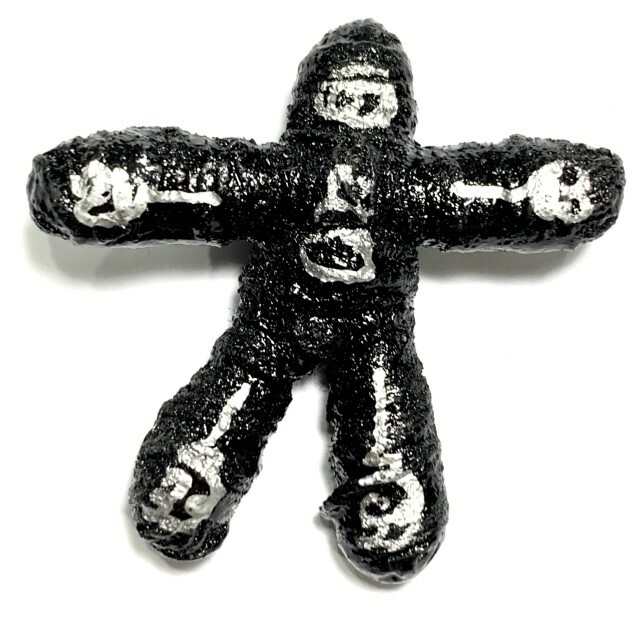 Luang Ta's Hun Payont are famous for their effectiveness to scare enemies, thieves and black magic away, and to protect and improve the home enviroment, wealth and prosperity. The Hun Payont is made using various magical substances and materials, and the spell is bound using wire torso wrapping of an old Scarecrow from a Sacred field with Ya Kaa Maha Bpraab straw from the Scarecrow. The scarecrow chosen for the wire to be used was one which no bird or crow had ever landed on and pecked at (a sign of its true power to ward off enemies). Then the effigy was bound with Sinjana Cords (Sai Siin - the white cords used by monks in prayer and ceremony), and the Khmer Kata Dtid Kata Dtreung double spell to enchant, fascinate, and daze your targets. Then more twine was wound around and given further incantations of the Akarn 32 and Taat See Kata for invoking the four elements of matter and the 32 componenbts of a living physical being, and then called the mind of the spirit of Hun Payont to enter and dwell within the effigy. 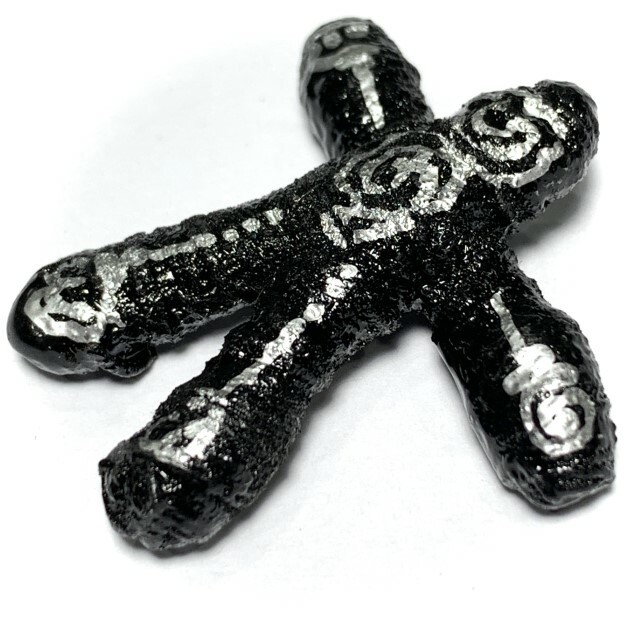 Then yet again, further Spell Inscription were made in ancient Khmer Pali, and Incantations were performed on the Hun Payont, during the night time in a cemetery. Luang Ta says it is more of a Super Yont than a Hun Payont, which, if you are in danger or about to get unlucky, can recieve the bad fortune instead of you. This particular Hun Payont is good for the following purposes; 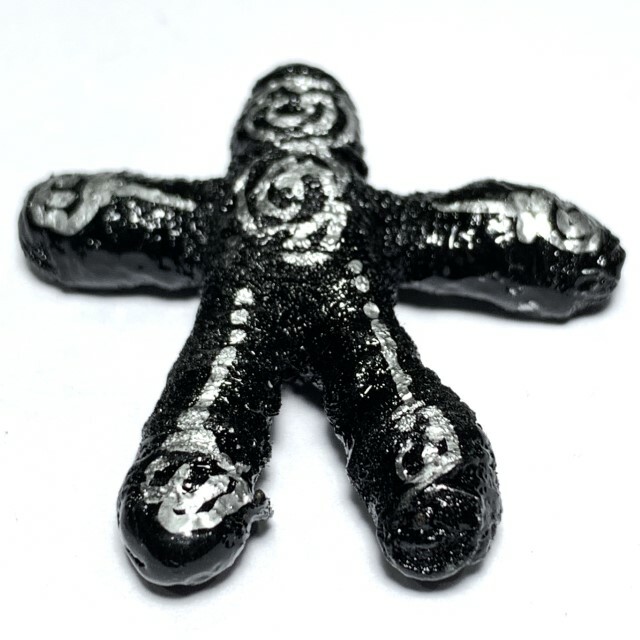 Karma Swopping - the Hun Payont can act as a Karmic Shield, and take the brunt of the Unfortunate events which may befall us due to Astrol;ogical Influences or Karmic Activity. You do not need to perform the Ritual of 'Pluk Hun Payont' yourself when adding it to your household membership as in the case of many Hun Payont amulets. Simply take the Hun Payont, and pray to it with flowers, one white candle, and 16 sticks of incense, and offer a little bit of money to the Deva inhabiting the Hun Payont (you can use the same money later to give to the Sangha, a temple or your preferred religious cause or way of making Merits, and offer those Merits to the Deva within the Hun Payont). However much money (to later donate alms to the Sangha with) you offer, is relative to how powerful and effective the Hun Payont will be. The Hun Payont can be used for Gambling too, to assist in winning hands and to stop cheaters from seeing or knowing your game.

The Hun Payont is a very powerful protection against black magic (as is the Wua Tanu, and Bia Gae), for it is constantly on Guard against invading Marauders, and that includes those of the Magical variety or those in the Spirit World. The Hun payont can be Hung in the House, Car, key-Ring, On the Altar, or even used in a group of four, eight or ten soldiersa to bury in the cardinal points of the ground on your home, or in the corners of your house.

Hun Payont as a Ritual Instrument

It can be used in Ritual Ceremony and Spell casting to make prayer water or assist in empowering various other objects. It is also a nice item to wrap up together with other amulets to make your own spell combinations to fit your needs, and carry with you or wirship on the altar to improve all conditions in Life.

1621 Hun Payont Soldiers made in this particular regiment.

Can be Encased in Waterproof Casing if Wished.

Worshipping and Chants for Hun Payont.

The Hun Payont is worshipped in a very similar fashion to the Mae Takian, Kumarn Tong, Hoeng Prai, In, and Rak Yom devas. All of these Devas are essentially Prai Spirits, and thus must be offered food and drink once in a while. Please click below link to read about the Bucha Methods; 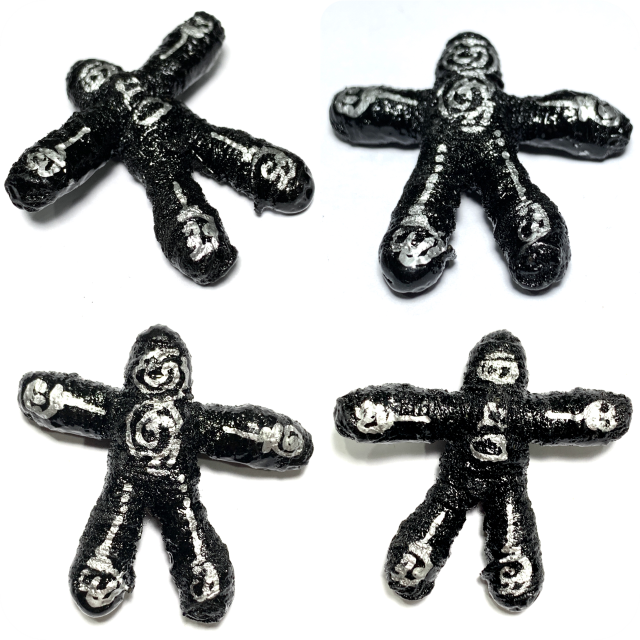