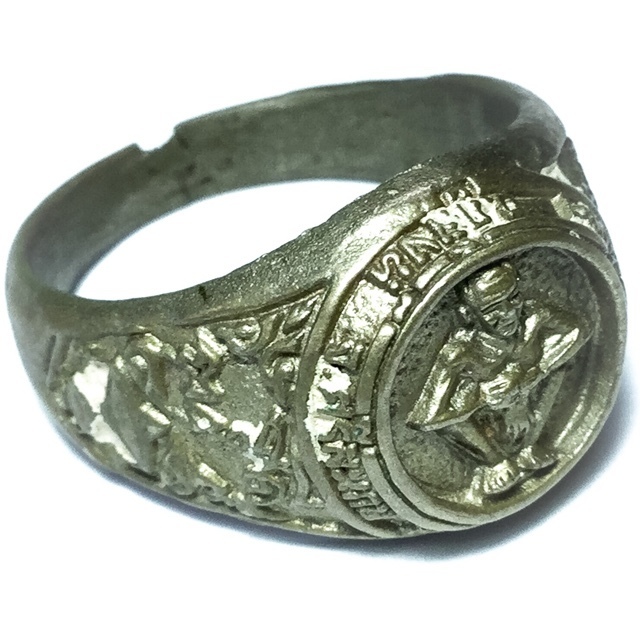 Sacred Guru Monk Ring of the Great Luang Phu Suang (Tewada Len Din), Mysterious Monk of Sri Saket, who was reputed in Legend to have lived for 500 Years, and whose life is as Mysterious as his Miraculous Deeds. 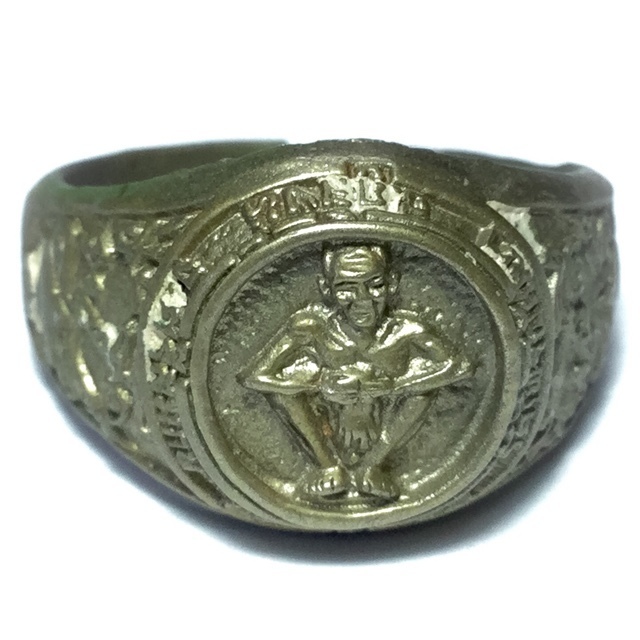 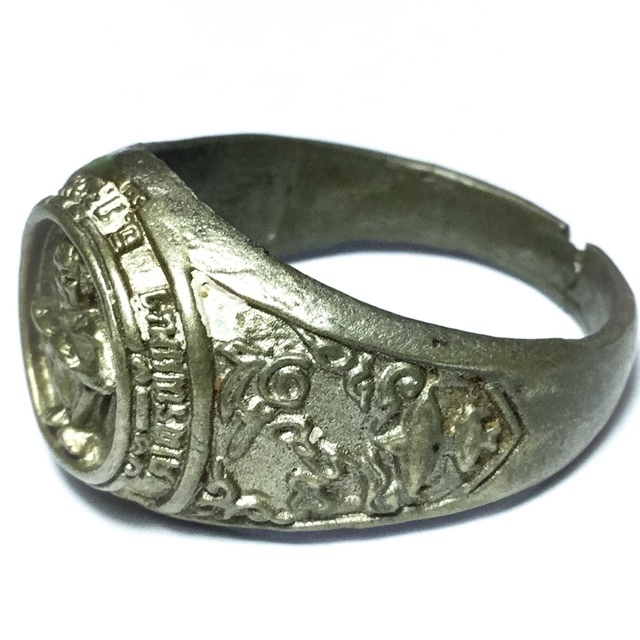 The Legend of Luang Phu Suang, Says that he lived for 500 Years, and that stories of villagers of various Generations all remember Luang Phu Suang being old and living in the middle of the rice paddy at Sri Saket. Luang Phu Suang was one of Thailands ‘Ariya Sangha (high Sangha), whose story is timeless. Luang Phu Rit Ratana Choto, the abbot of Wat Chonlapratan, was once asked if he knew Luang Phu Suang from Sri Saket. 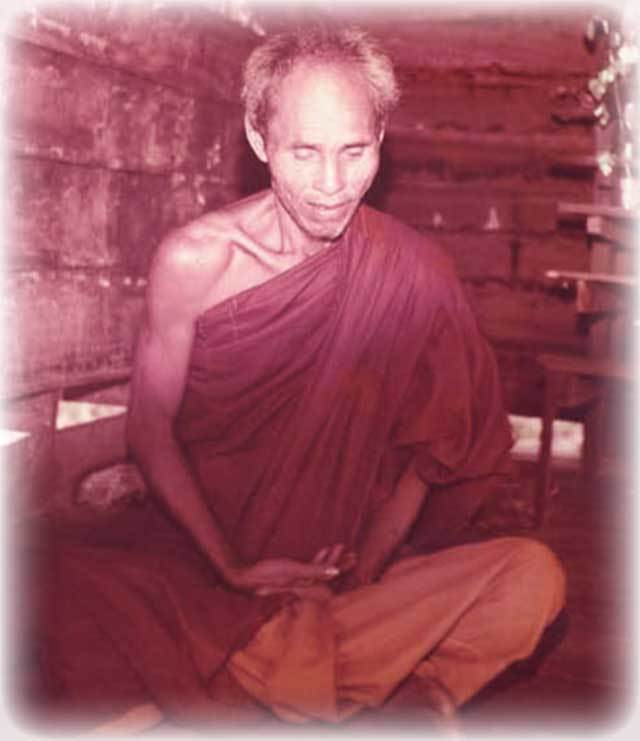 Luang Phu Rit Answered that he did know him, and that he had known him for a very long time. He said that as he was making merit building the Dhamma Sala, Luang Phu Suang came to visit. No one saw which direction he arrived from, but when he left, he was seen to walk out to the jungle in front of the temple. This jungle was both thick and large, and was inundated with water from the rains. Luang Phu Suang walked out through the flooded field towards the edge of the jungle. 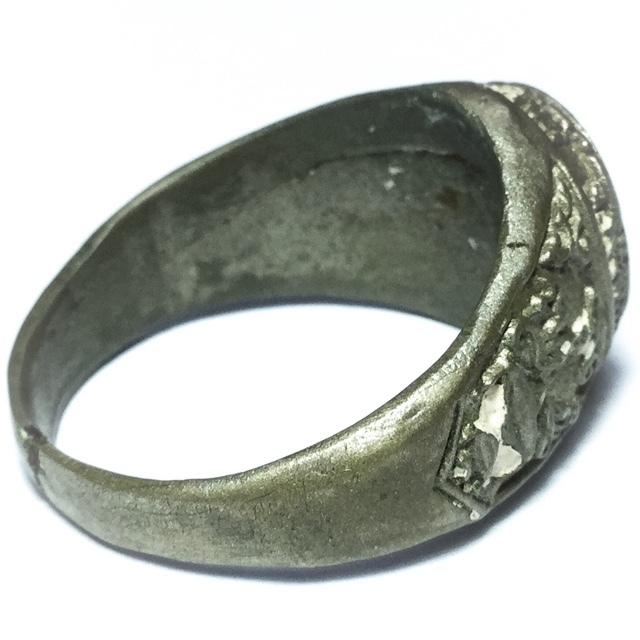 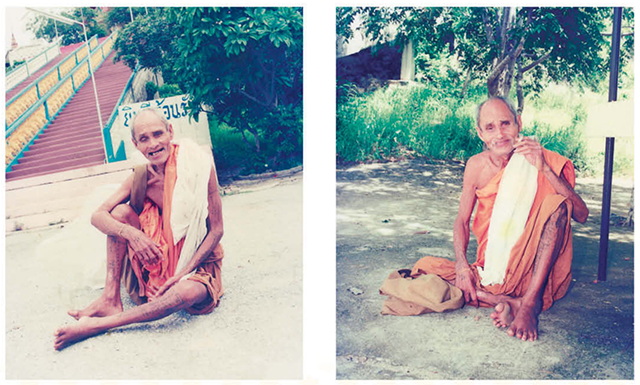 Luang Phu Rit says he knows not which temple Luang Phu Suang was at, nor does he know his real age. He tells of the time he first saw Luang Phu Suang,, sat on a wooden shack in the middle of a field on the Khmer side of the Thai Khmer border in Ban Lalom Sadao. Khukahant, near Sri Saket. It was a very dilapidated ‘Gratom’ (wooden shack), whose roof and walls were not really able to stop the wind and rain from entering. On this particular day, Luang Phu Suang was sitting in the Gratom, and an old man with white hair was sitting in attendance, massaging the legs of Luang Phu. 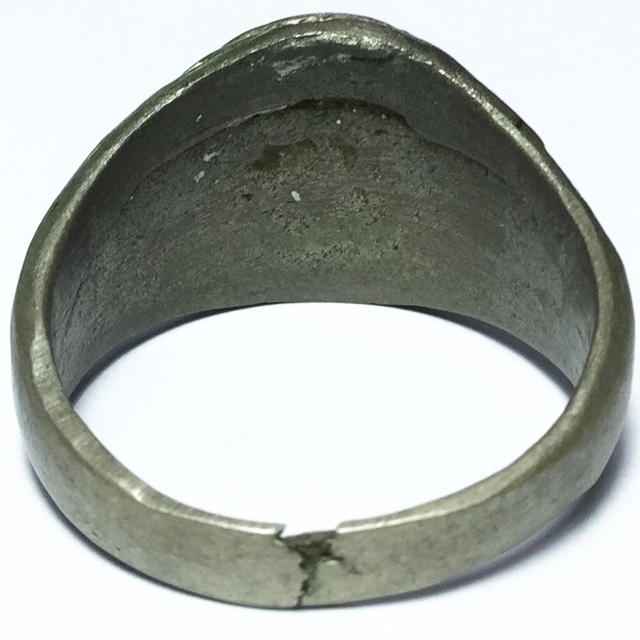 Outside the Gratom, were four or five villagers, both male and female. Luang Phu Rit approached Luang Phu Suang (it is unclear in the Thai language Biography, whether LP Rit was a monk or a layman in this time), made prostrations to him, and then asked how old he was. Luang Phu answered that he had forgotten the past already, and that he had come to be known as Luang Phu Suang. He said that the Luang Phu Suang of legend was not him. 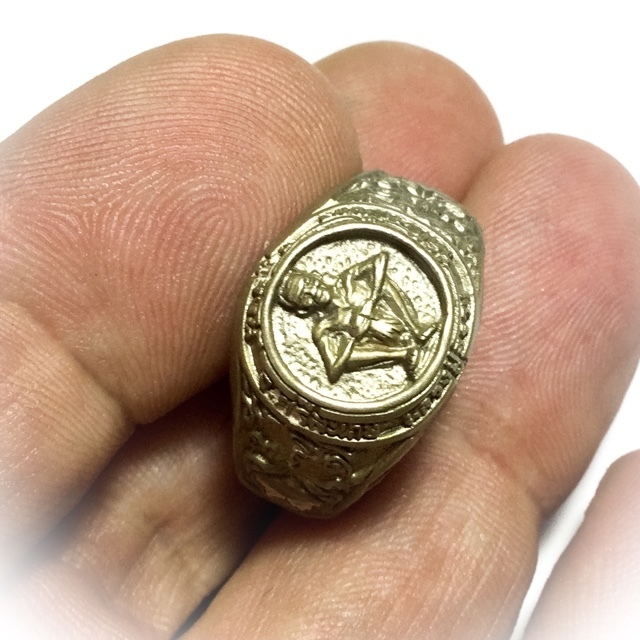 It can be interpreted that Luang Phu Suang was giving a Dhamma lesson in showing that one should concentrate on the present and not be concerned with the past, which is gone forever, and cannot be revived. On the side of the Gratom, there was a large paper kite, which attracted the attention of one of the visitors, who asked one of the locals why the kite was there? 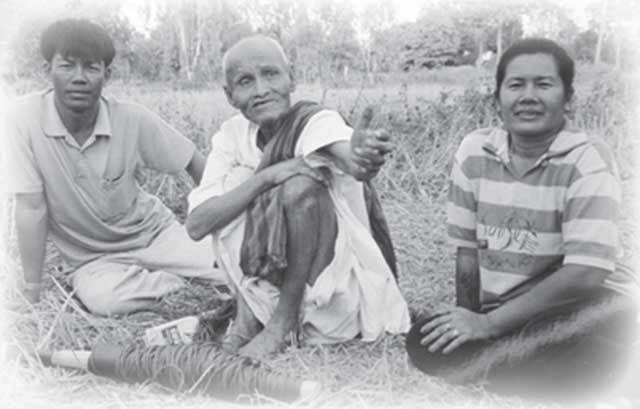 The locals explained that Luang Phu Suang liked to fly Kites, and that when it was windy, the local villagers would come to fly their kites in this field, and that Luang Phu would sit and watch, laughing and clapping. If Luang Phu Suang disappeared on one of his leaves of absence, his kite would be missing from the side of the Gratom; if the kite was there, then Luang Phu would also be there, if the kite was gone, then Luang Phu was not there either. When asked why the villagers never saw how Luang Phu Suang would disappear sometimes, the villagers explained that they were only in attendance in the daytime, and that at night, they would all return home, leaving Luang Phu alone in the Gratom. 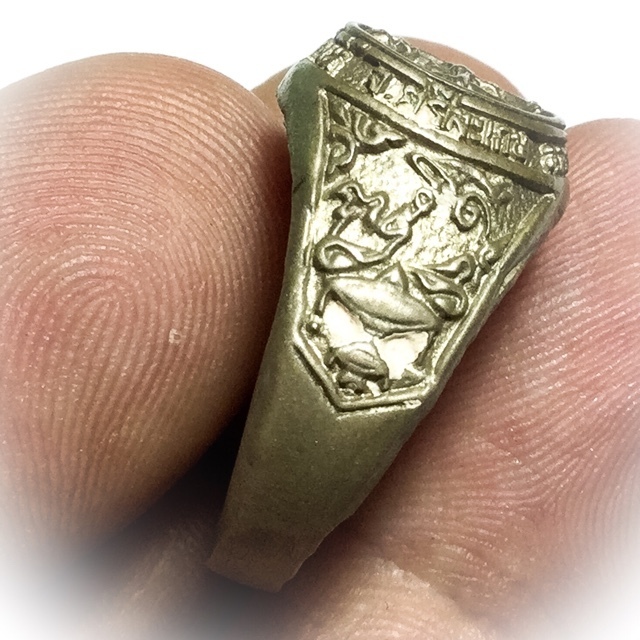 This was when he would take his leave on his various journeys. It was believed that Luang Phu Suang used to fly away through the sky with his kite in the darkness of night. It is told that Luang Phu Suang also liked to watch ‘Gai Chon’ (cock fights), and that he would often be seen sitting watching such competitions, clapping and cheering the cockerels as they fought. Whenever devotees would seek out Luang Phu, many of them would often ask him for numbers (used for lottery). In many occasions, people would win large amounts of money, using the numbers they received from Luang Phu. 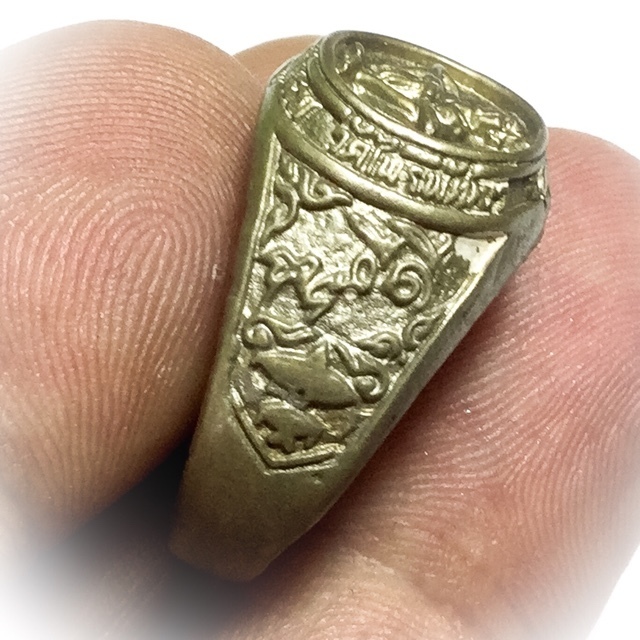 Some people would then go and pay respects again to Luang Phu, and donate a large sum of their winnings to him. Sometimes he would take the wad of cash and just throw it into the marshes. In such cases, most people ran over to the spot where he had thrown it to retrieve it, but they were never able to find it again. On other occasions, he would take the money, but would ask to go for a drive in the car of the devotee, and then would throw the money out at poor people on the way. 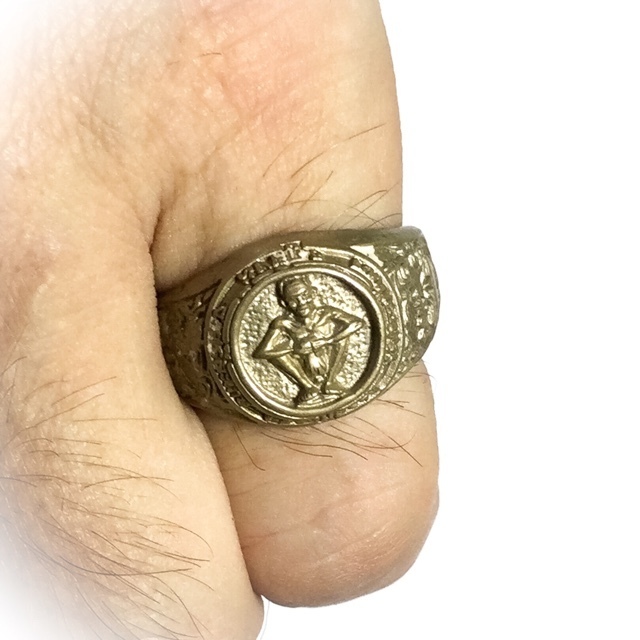 In the times of the internal war in Cambodia, when many refugees were fleeing to Thailand, it is said that Luang Phu Suang would change into white clothes , and go out to help bring the Cambodian refugees over into safety on the Thai side. Luang Phu Suang would make safe places to cross, and stick a white flag in the ground at the place where the people would be able to cross safely. No one was ever hurt from shooting or bombs whilst crossing in the safe places marked by LP Suang.. After the war, LP Suang returned to stay in his Gratom in the middle of the field in Khukhant. 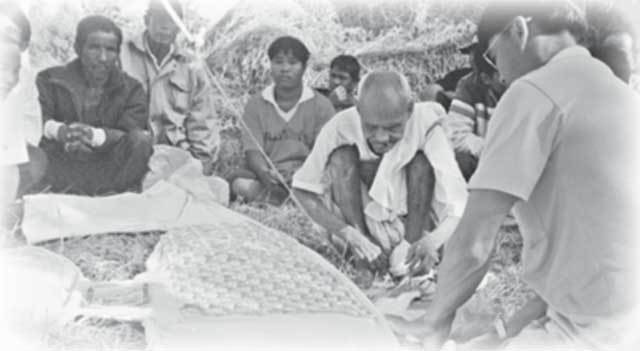 When people visited they would enter the village of Lalom Sadao and ask at the local stores if LP Suang was at the Gratom in the field. If he was there, the villagers would always know, and if not they would say he was away on one of his mysterious voyages. It is believed by many people that Lp Suang is over 500 years old, for which reason ha has a nickname “Lp Suang Ha Roy Pi – Jam Wat Tua Jakrawan” (Lp Suang 500 years old,who resides all over the Universe). 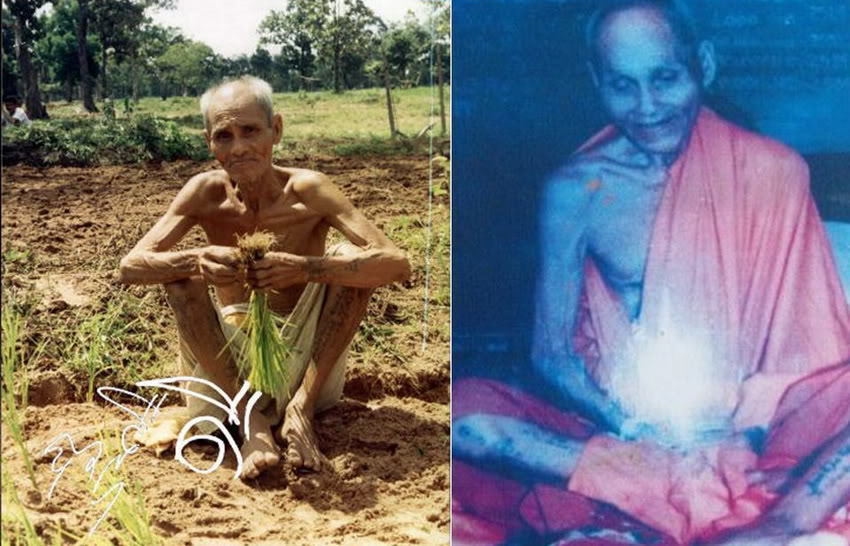 Luang Phu Suang is also known for his rather odd behavior; on one occasion, he was invited to bless a new shop which had opened. Lp Suang performed the chanting ceremony and blessings, then, as he finished, he stood up and hoisted his robe, and proceeded to urinate in front of the shop. The shop owner saw what was happening and quickly rushed to catch the urine, which he then sprayed all over the shop. The shop owner explained later that LP Suangs urine was not warm like that of a normal human, and that it was cool like ice. 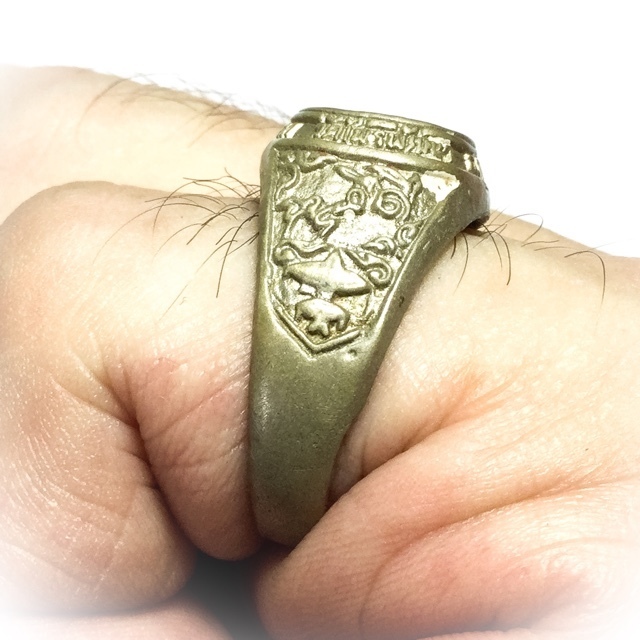 When the lottery came out, the winning number was exactly the same as the house number of the shop. On other occasions, LP Suang was invited to house blessings with other monks from other temples, and, after the ceremony, LP Suang would move to the center of the room and excrete some dung. In most cases the house owner would rush over and lay something under him to catch the excrement, and then spread it out throughout the house! It is said that his dung had a pleasant aroma. 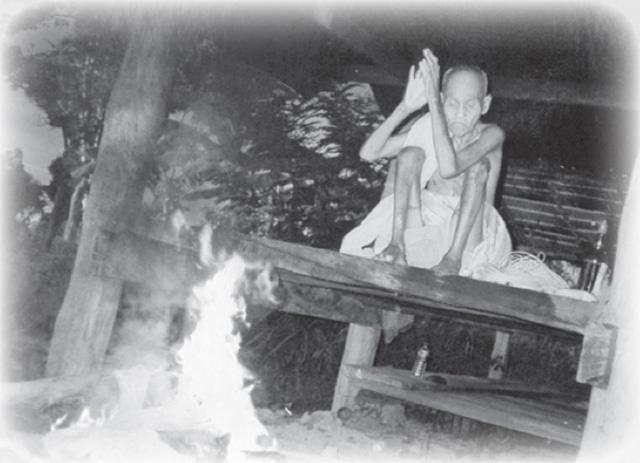 It is common knowledge, that LP Suang used to like to hitch lifts with people in their cars, and than no local folk would ever dare to refuse him, for if they did, the car would not start, or start and stop intermittently. He would let them drive him for long distances, then ask to get out at the most unlikely places. Once he would get our of the car and walk a few paces, he would disappear from sight mysteriously. 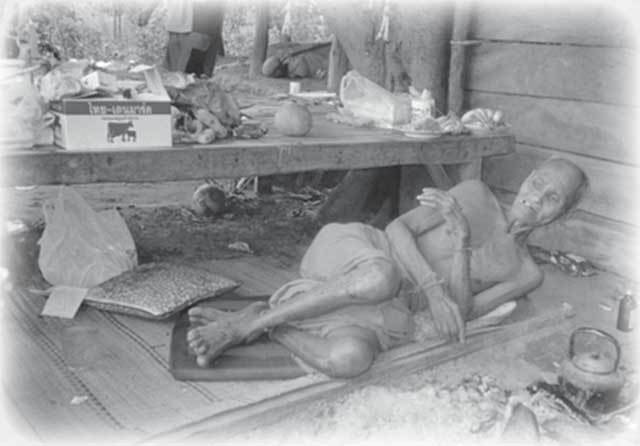 Sometimes, Luang Phu Suang was said to be present at the Gratom in Ban Lalom, but was also unpredictably capable of disappearing for long periods of time, and nobody knows where he had disappeared to. Luang Phu Suang's amulets are said to have the following properties; 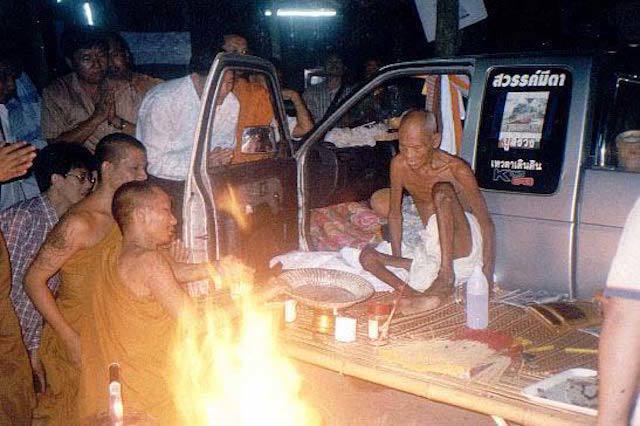 The wearer of Luang Phu Suang's amulets will not ‘Dtaay Hong’ (die in a terrible accident). In times of difficulty, be it financial or otherwise, you can revere the amulet and ask Luang Phu Suang to help you in your endeavors. Many people believe their success to be due to their prayers to Luang Phu Suang being answered Kong Grapan Chadtri protective magic is present in a high degree in all amulets from LP Suang. 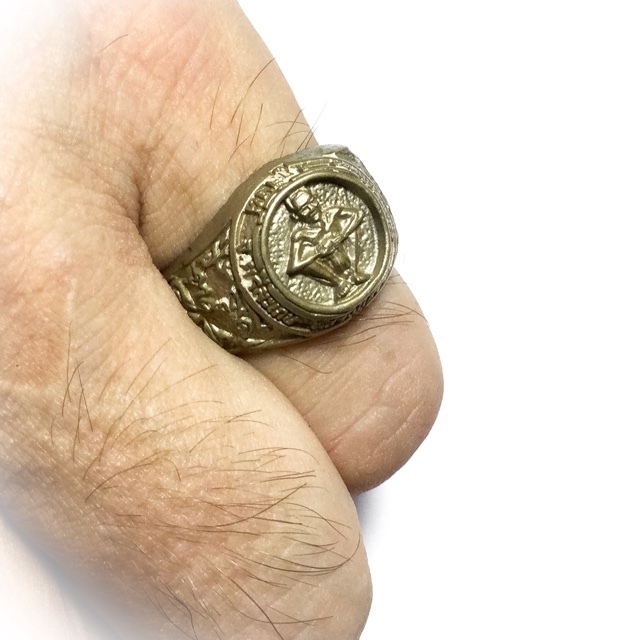 There are many tales of life saving miracles occurring where Luang Phus amulets were worn. Protection from black magic, ghosts, fairies and local spirits. Serm Duang (improve fate and karma – auspicious improvement of ones horoscope). Protection against lightning and fire damage. 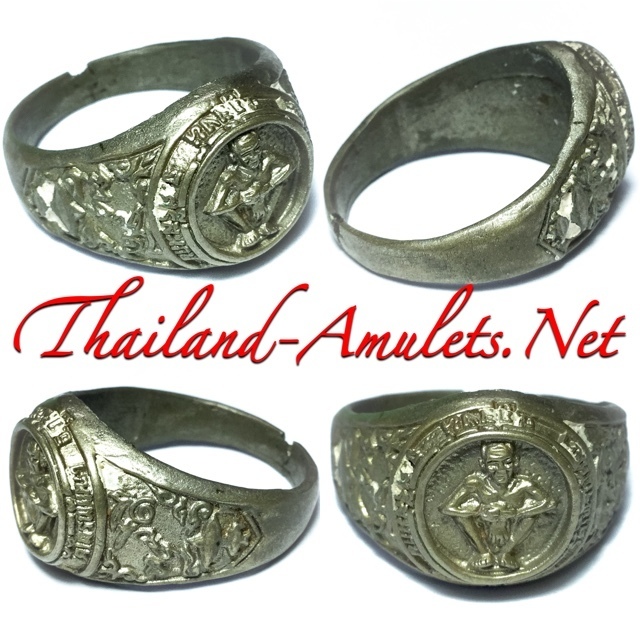