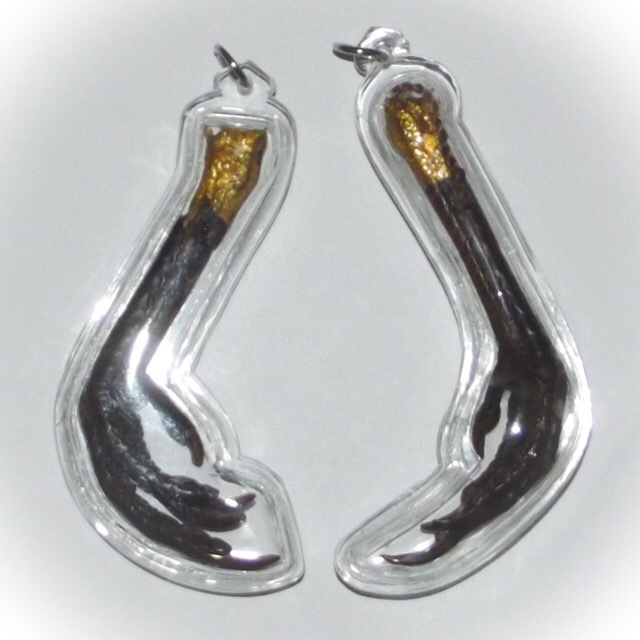 The Gai Dam is a Rare kiind of Cockerel what is completely Black both on the outside, and the inside. Its Powers when used for making Amulets, are considered to be extremely powerful Talismans for 'Nam ma Ha Kin' (propagating and perpetuating successful profession, and an immensely powerful protection against Black Magic Curses and Sorcery that might be used against the owner of such a Talisman.

Used for Gambling and Wealth increase, Maha Pokasap Treasure Accumulation, and for performing spell-casting using the claws to send and direct Magick Spells to chosen targets. The Cockerel uses his feet to clear the dust and uncover his food and sustenance before he picks it up once it appears. 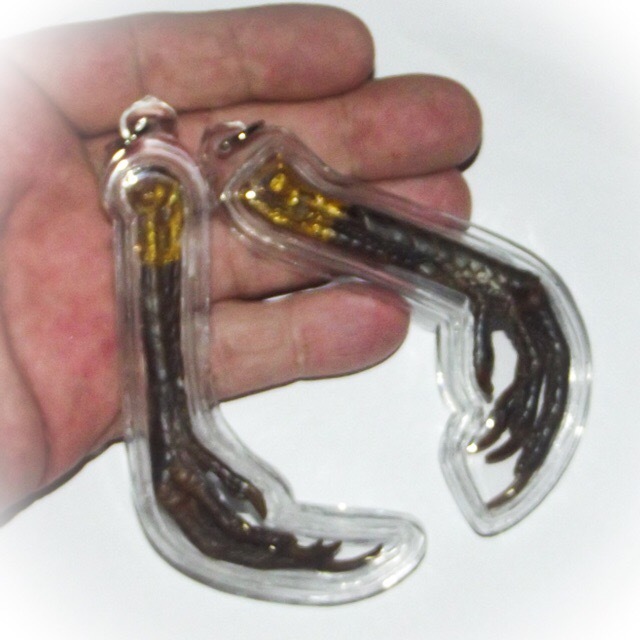 Waterproof Casing is Included with this Item. Two Cockerel Claws compose the set.

This suggests the uncovering and easy perception of sources of wealth and sustenance, without having to bow down and rummage around in the dust to get it. He sleeps in a tree above where all the searching is going on, and only flies down when it is light, and safe to take his pick of the crop. His eye is attuned to the sight of that which remains unseen to others. 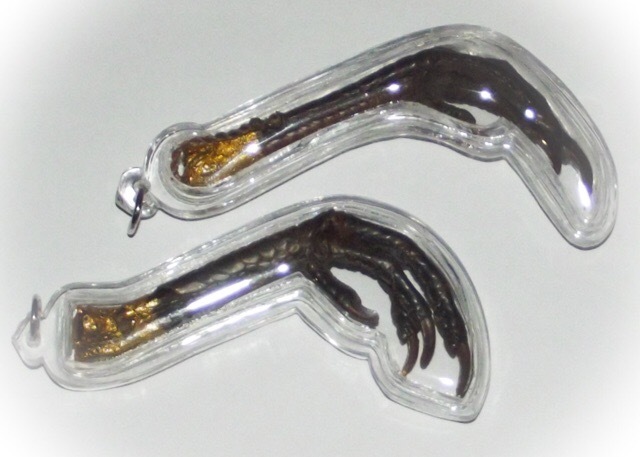 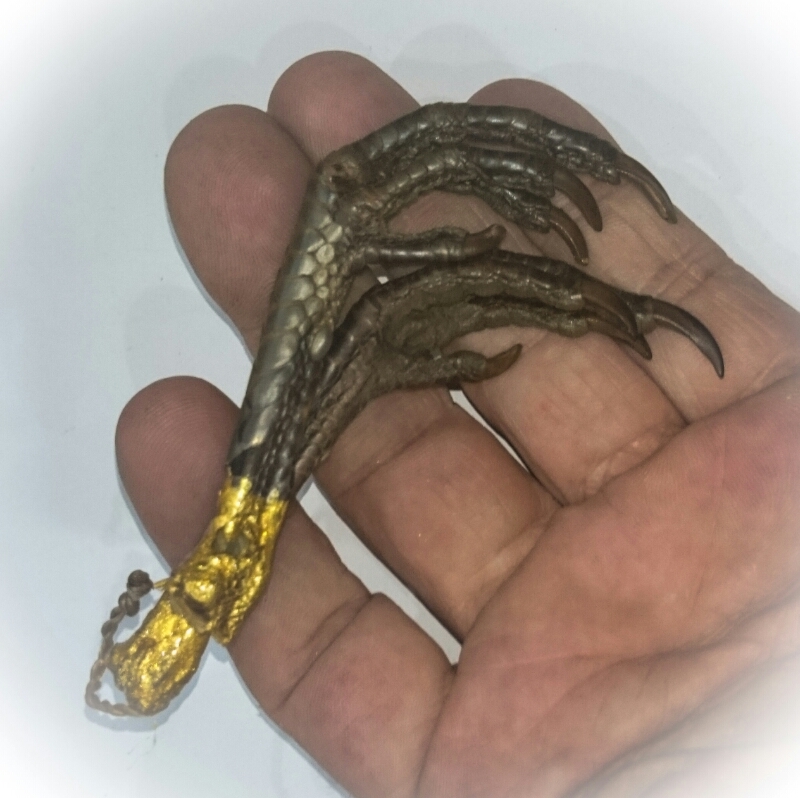 The Kha Gai Dam are created and empowered using the most ancient Wicha of Khmer Occult Necromantic Sorcery, and can be worn as a Lucky Charm for Gambling and Protection against Black magic, and Evasion of Enemies. 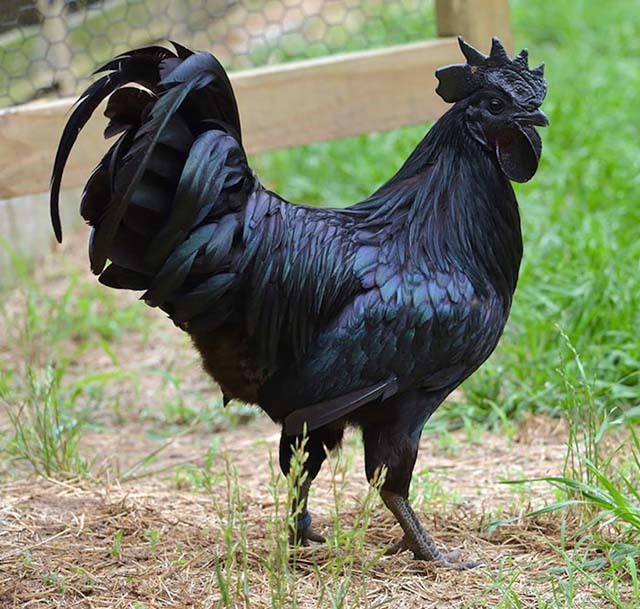 To carry them performs a similar function as the rabbits foot does in the western world, but with a much more powerful effect due to the Necromantic Incantations used for the Invocation of Ancient Prai Necromantic Spirits and Incantations to Empower using Maha Sanaeh Occult Magick, for which the Ancient Khmer Wicha is so famed. 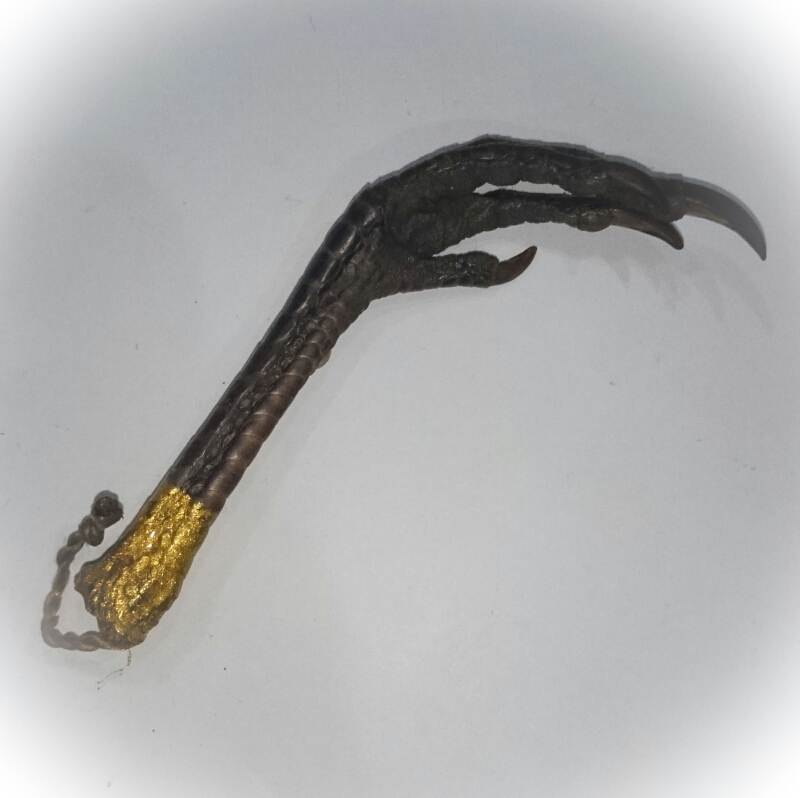 A simple rabbits foot has lucky power, but does not posses any specialized Sorcery or Incantations, or other forms of Empowerment from a Sorceror using Occult Magick, and hence its powers can not be compare in the slightest to such an Ancient form of Necromantic Talisman as the Kha Gai Dam. 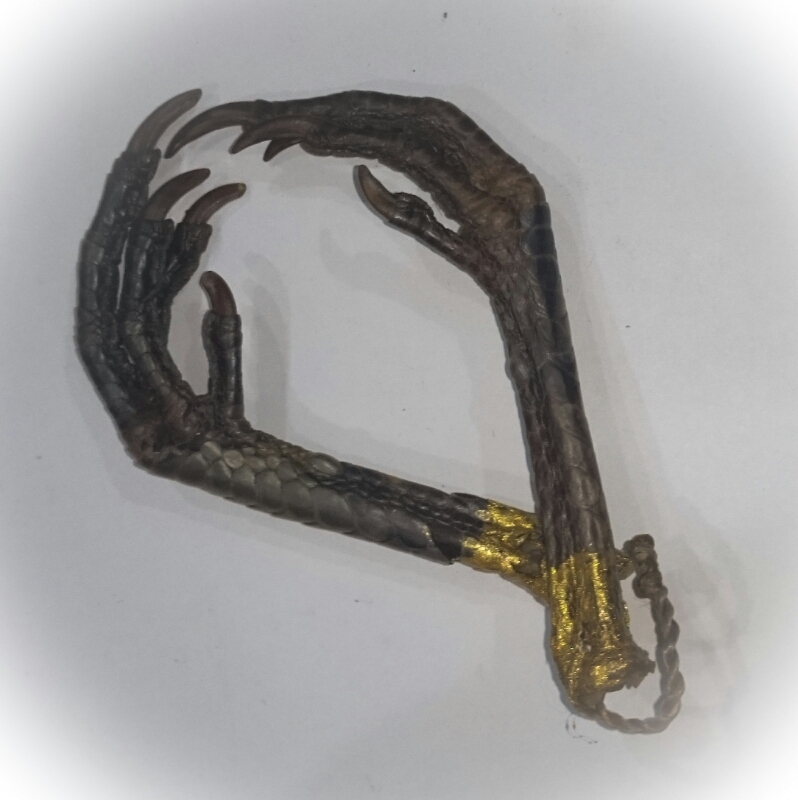 The claws were obtained from a Khmer Sorceror in Kampuchea (Cambodia), whose name is Unknown, but whose Wicha is one that is so rare to fins and belongs to one of who we believe may be one of the very last remaining truly authentic Khmer Necromancers possessing the Ancient Methods of Khmer Necromantic Sorcery. 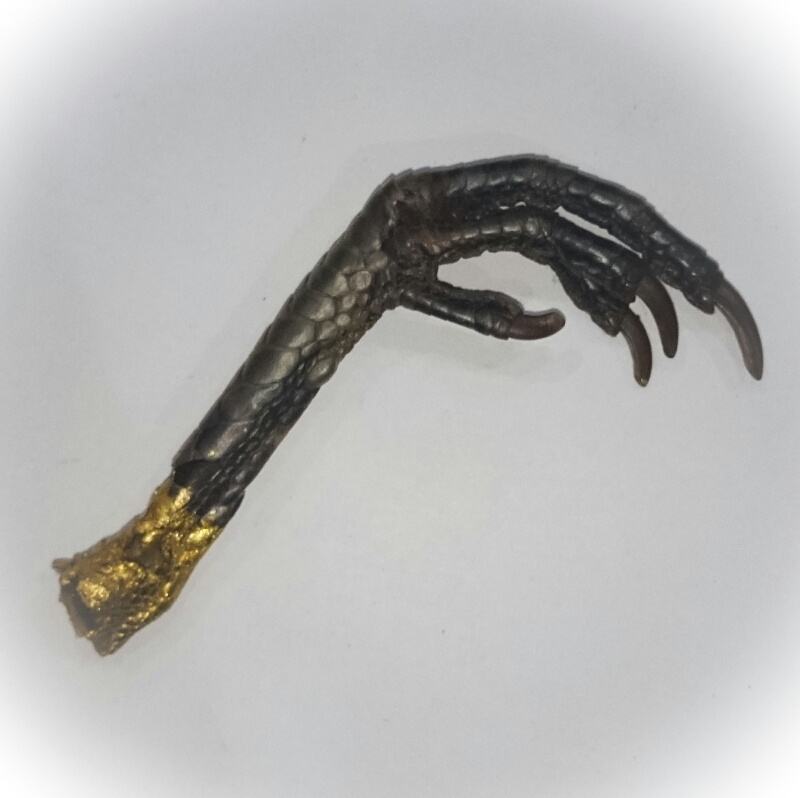 This is the first time we have ever been able to obtain such a rare Talisman from the Khmer Masters, and we had to spend a long time to find the connections and line of communication to ensure the chance to obtain this authentic powerful ancient Necromantic Talisman. 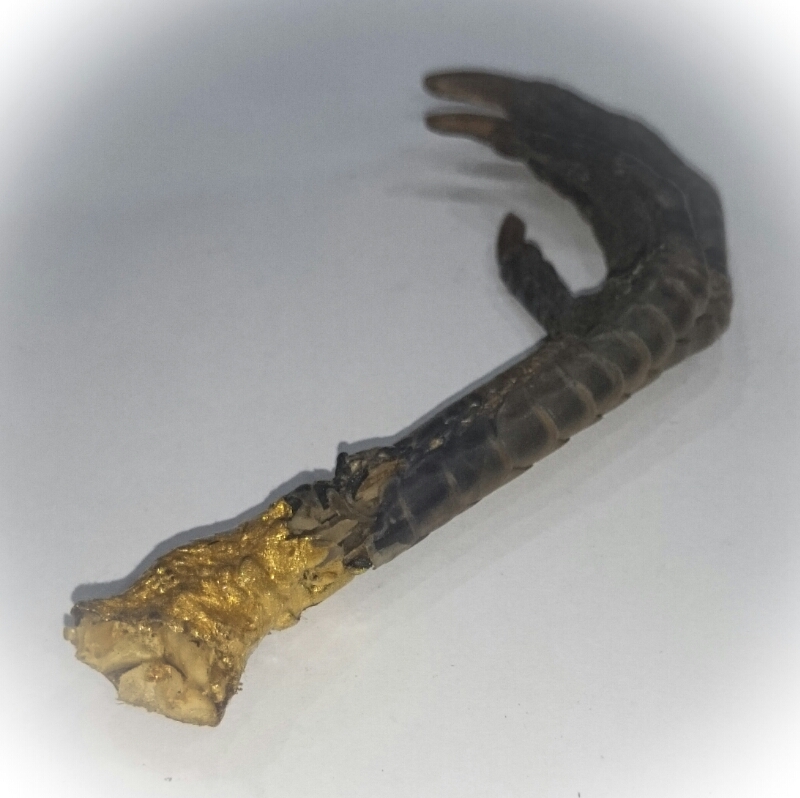 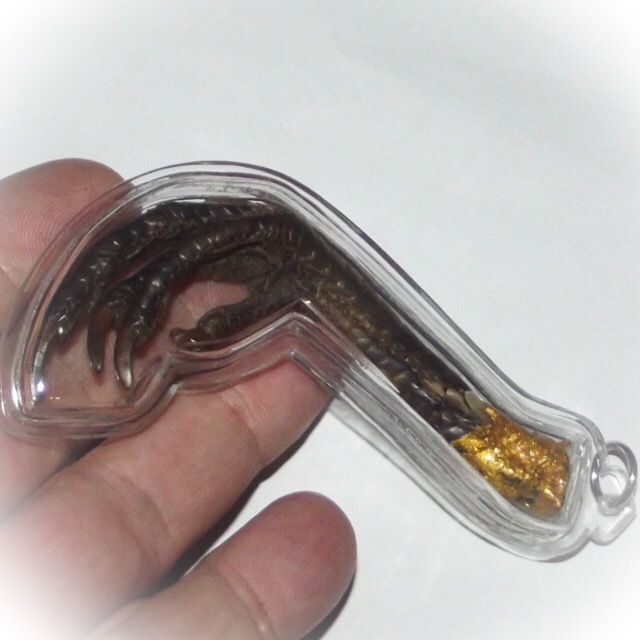 If you Chant the Kata three times every day for three months without missing a single day, then you will possess great imposing Maha Amnaj commanding power to call people with your speech and hold them to your requests, suggestions and orders, Sales Speech will work its way with Great Metta Mahaniyom Mercy Charm. 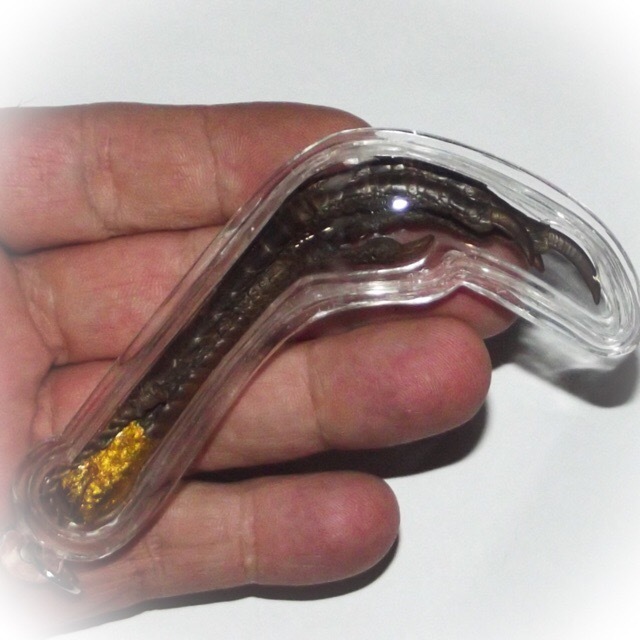 The Kata is taken from a Sutra and Converted into 'Hua Jai' root syllable heart mantras and speaks of the tome when the Kakusanta Buddha was born in a previous existence as a Wild Forest Cockerel, and is the Akarn 32 (Body of) the Five Buddhas of this Time Cycle of this Universe; 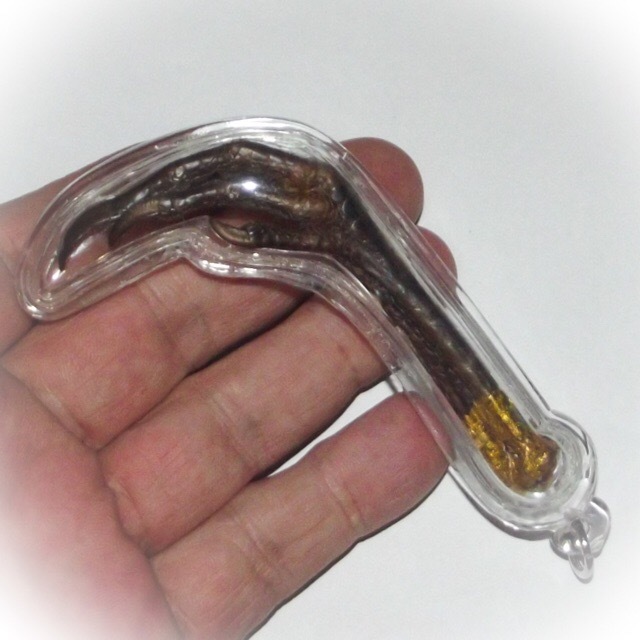 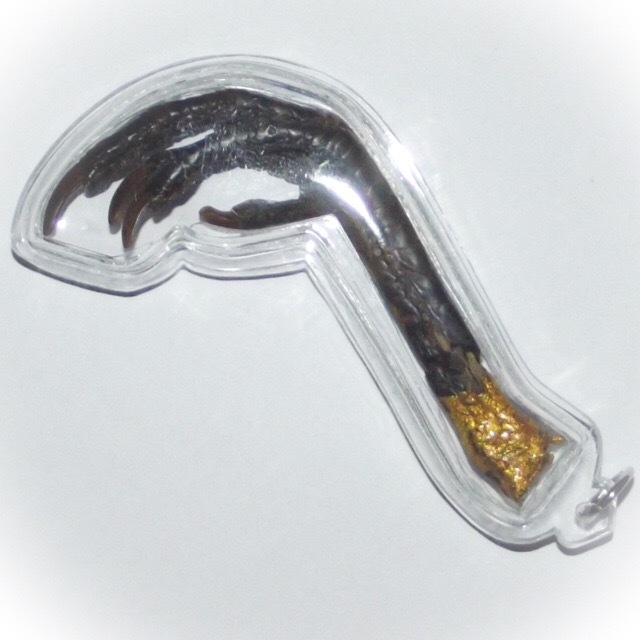