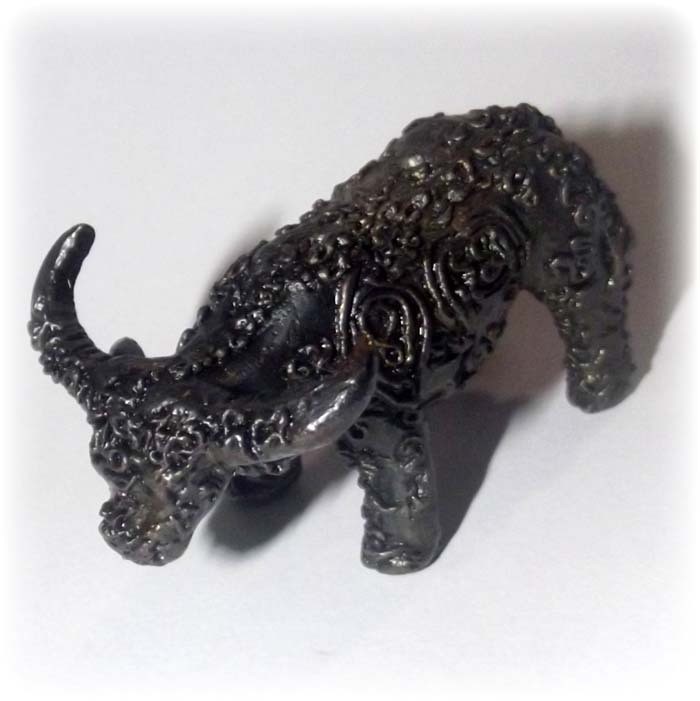 The Kwai Tanu Bucha 'Loi Ongk'(portable size) Sacred Arrow Buffalo, from Luang Por Jerd, comes as just one of a large range of special and highly expected amulets and Bucha statues that Luang Por has ever made. A most acclaimed Edition that has not even had the chance to reach all the distributors, due to massive sell-outs on the day of Issue at the Temple after the Putta Pisek Blessing. The Kwai Tanu is a Powerful Guardian and Bringer of Sustenance, as well as a very Aggressive protector against Black Magic Ill Wishers, and Thieves. 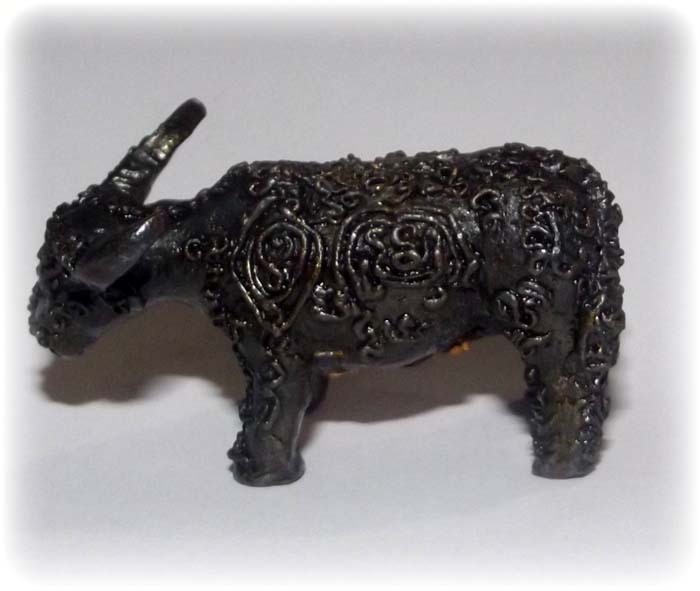 The Kwai Tanu statuette is made from 'Nuea Loha Aathan', a Sacred Alchemical metal Alloy. The Amulet is Endowed with one Takrut in Muan Sarn Powders and Krang Putsa Resin Paste of the belly. Instilled with powerful Anti Black Magic and Protective spells to prevent thieves, demons, sorcery and curses from entering the household or vicinity around them. 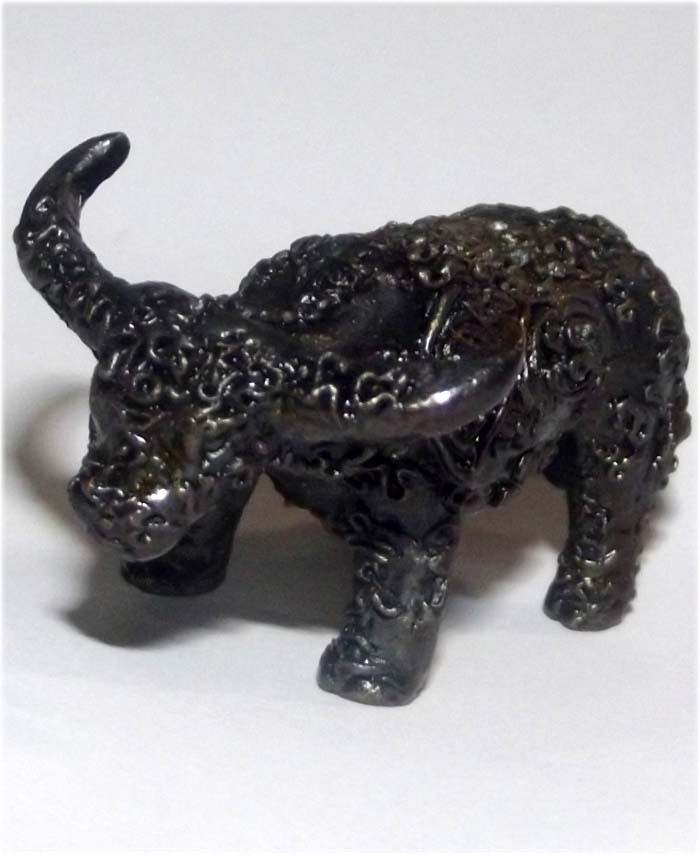 A powerful protector against Black Magic and House Invadors, as well as a strong attractor of wealth and treasures. Luang Por Jerd has applied the Powerful and Authentic Wicha of his Mentor, Luang Por Noi of Wat Sri Sa Tong, to empower and bless this editon of amulets and Bucha statues which we find to be of the Highest Quality and has had Authentic Empowerment.

This series were made available as 'Kwai Tanu' (Sacred Buffalo), or as 'Wua Tanu' (Holy Bull). They were made as large Bucha Statues and small portable Loi Ongk Statuette Amulets. There are Eight different Bucha Statue versions in all, which were made in two different sizes, in 3 inch wide or 5 inch wide Bucha statues. This Portable Loi Ongk Version was made in Wua Tanu, and Kwai Tanu forms, with one Takrut, immersed in Krang Putsa Paste inserted into the stomach of the Amulet. 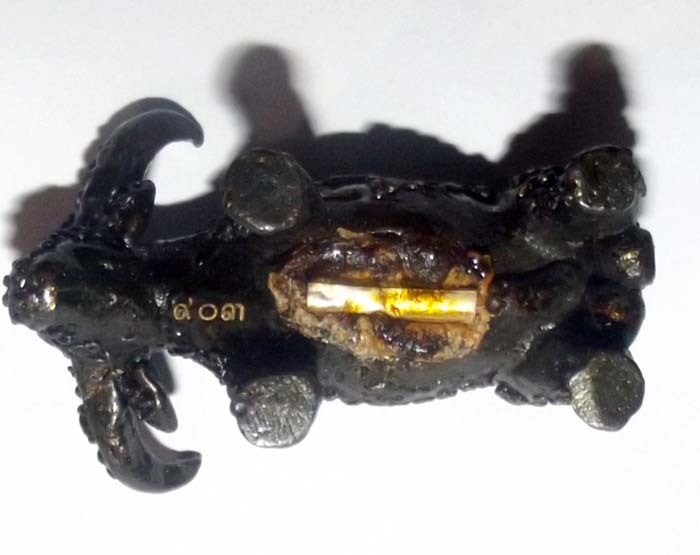 The Muan sarn in the belly contains a host of sacred and Sorcerous Ingredients to Empower and increase the Potency and Power of the Kwai Tanu. Amongst the most important Ingredients were; Pong Hua Jai Kwai Tanu (heart of the Wua Tanu Powders), Krang Putsa Dtaay Prai (Putsa paste from a Putsa tree that died as a Prai, Earths from seven cemeteries, Earth from Seven Giant Termite Mounds, Crab Sand Pellets, broken pieces of Temple Wall bricks from seven Temples, and 108 Herbs, Woods and Pollens. 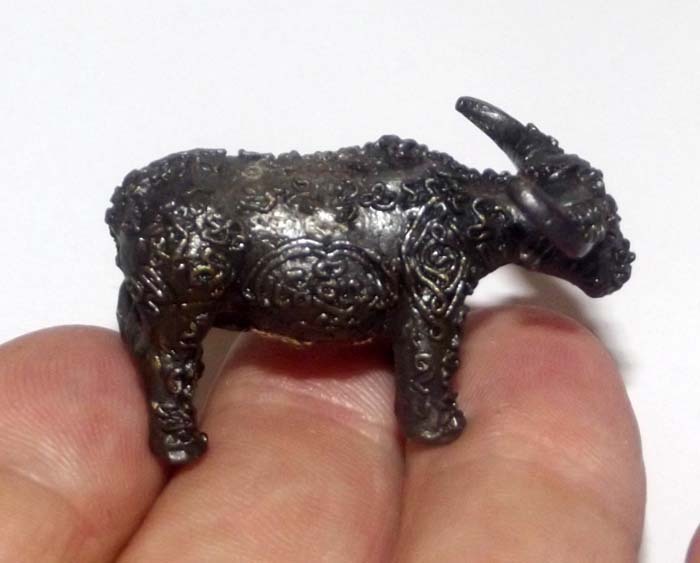 The Amulet is 4 Centimeters long, 2 Centimeters High, and 1.5 Cntimeters Wide at the hips. Released in a very special edition of amulets from Luang Por Jerd, which included some Extremely Luxurious Lockets with the image of Luang Por Jerd on the front, and a thick Sacred Powder filling in the Rear Face of the Amulet, with a Pra Sivali Loi Ongk Statuette and 108 or 56 Takrut Spells Inserted into the Muan Sarn Base Formula.

have recieved so much attention to detail and fine quality Chanuan Muan Sarn (Metallic Artifact Metals) and Pong Muan Sarn (Sacred Powders, with the Empowerments and Blessings of a Legendery Monk of the Calibre of Luang Por Jerd, who is the direct L:ooksit and Apprentice in Magic to Luang Por Noi (Famed for his Pra Rahu Coconut Shell Amulets), of Wat Sri Sa Tong.

Place the Kwai Tanu on a 'Pan Kroo' (Prayer Tray) or small Altar. Offer Water to drink (do not let it ever go dry). On Holy Days and Buddhist Festivals offer dry grass or hay. 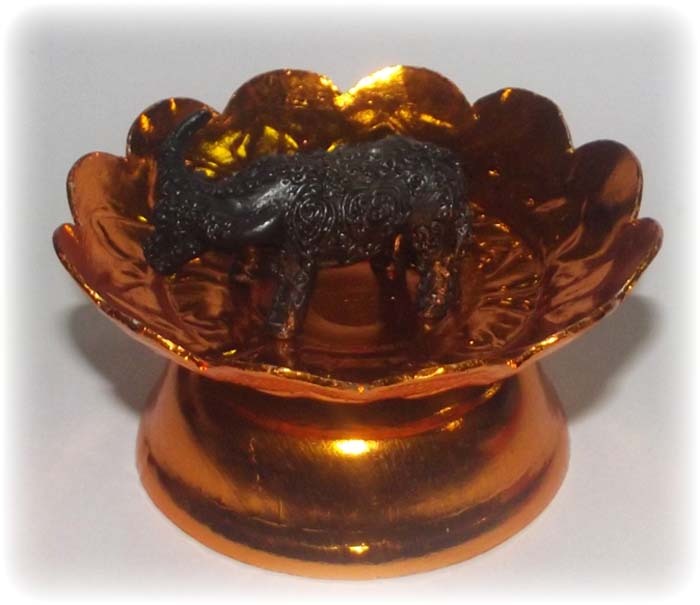