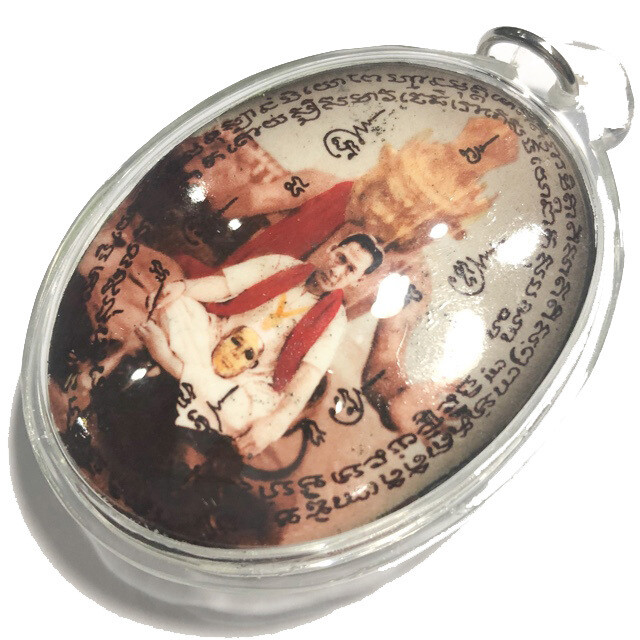 The front face of the locket features Ajarn Prodt, seated with a Siarn Khone of Pralaks Hnaa Tong (Lakshman Golden face), and the Lersi Phu Jao Saming Prai Tiger Faced Ruesi Hermit God in the background. The Locket is embellished with a plethora of sacred Khom Agkhara spells, and Sacred Na Yantra inscriptions around the border of this Jumbo size Ongk Kroo Locket. 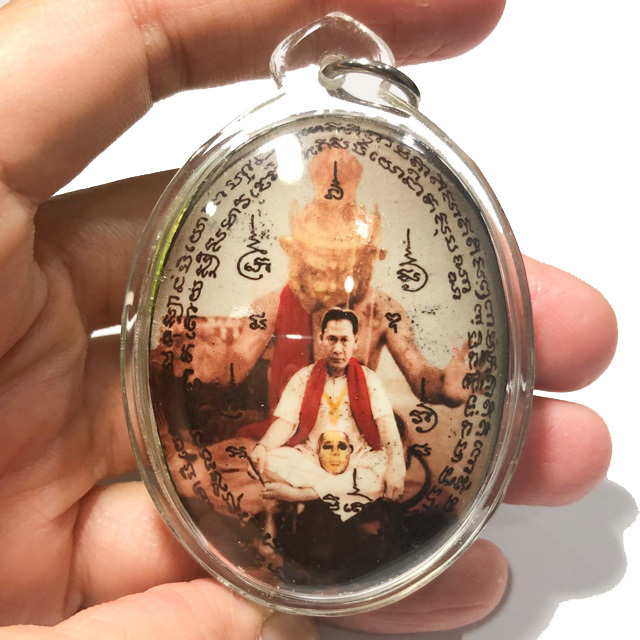 Made using a most Powerful selection of rare Prai Ghost Powders, Chin Aathan Lersi Bone powders, and other powerful ingredients. Inscribed by the hand of Ajarn Prodt, with Necromantic Invocations and Spells of Prosperity in Khom Agkhara script. Ajarn Prodt is a reclusive Hermit Sorceror, who focuses on using undiluted pure Muan Sarn Sacred Ingredients, and whose amulets are now the source of furor with Devotees around the world.

Free registered airmail shipping worldwide is included with this amulet. weights will not be calculated. The amulets of Ajarn Prodt, are only made in small numbers, with each amulet being individually empowered, and remaining faithful to the olden days methods, which are very lengthy, but are the most powerful and authentic. 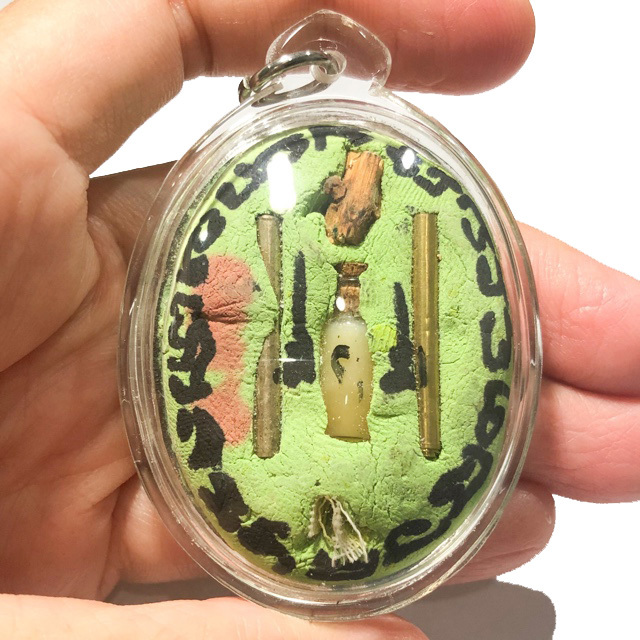 The Rear Face is filled with Green Prai Powders in highly concentrated form using the richest of Ajarn Prodt's famous repository of Necromantic Muan Sarn ingredients. A Piece of Mai Yae Hyae wood for Maha Sanaeh is inserted, along with two large Takrut, a piece of Pha Hor Sop corpse cloth, with a Phial of Necromantic Hua Chuea Nam Man Prai, are embedded within the Muan Sarn Prai Powders. The Phial of Nam Man Prai is from a Phii Prai Dtaay Tang Glom, Kumarn Tong-Mother Necromantic Serum. Sacred Khom Agkhara spells have been hand inscribed upon the surface of the borders of the Muan Sarn Prai Powders filling the Locket. 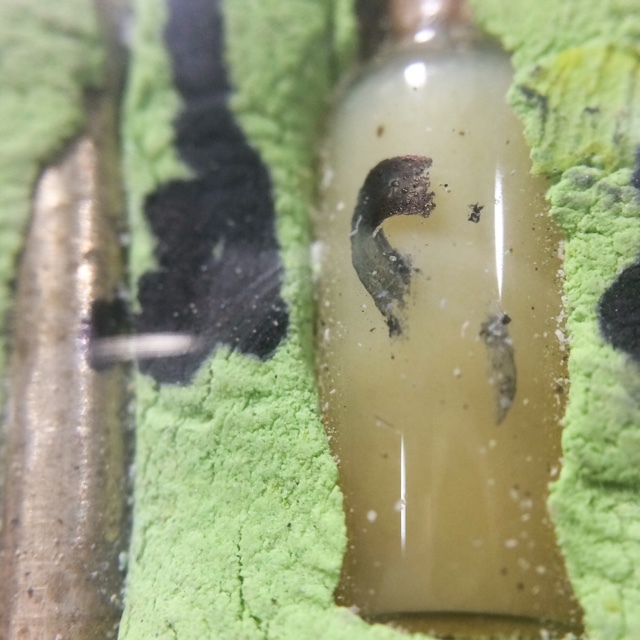 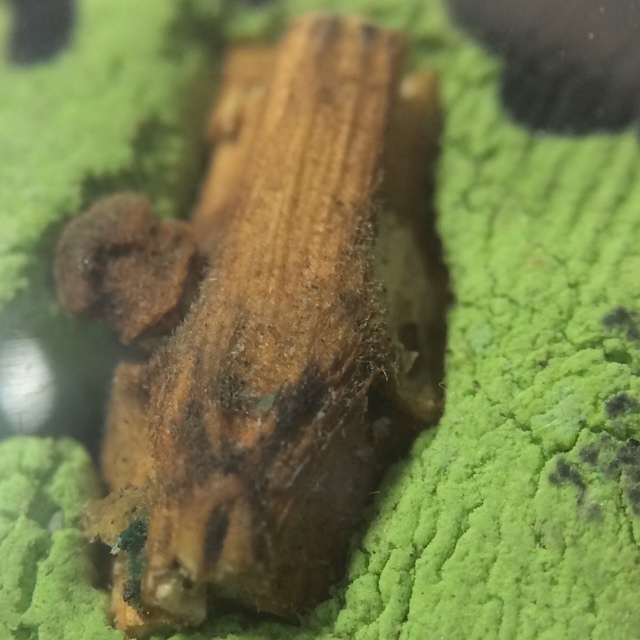 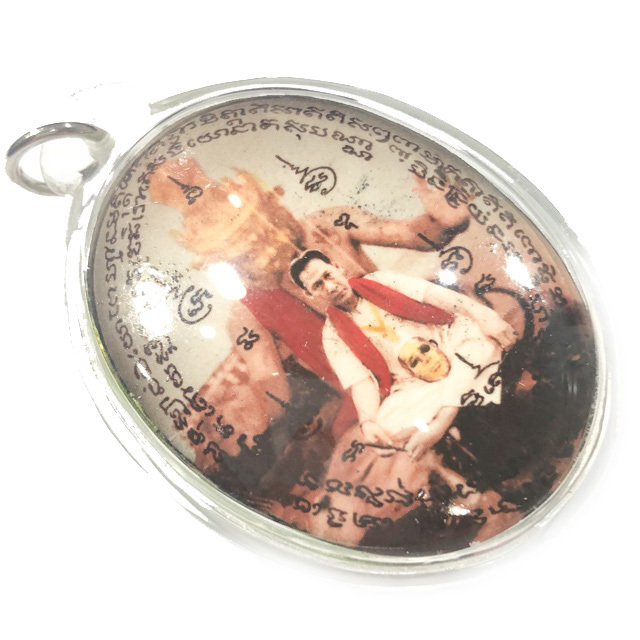 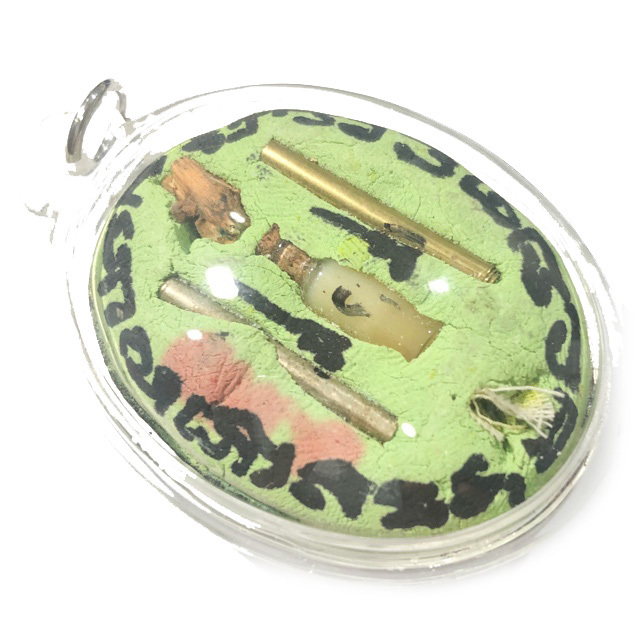 This Ongk Kroo Master-Piece Locket is a top class amulet with the finest magical ingredients, from Top Lay Master of the Necromantic Dark Arts, Ajarn Prodt, who in recent years has received such very high favor in Thailand and around South East Asia, for his effective and powerful amulets. He prefers to return to keeping a low profile, and for this reason, his amulets have now become very rare to find, unless you have a direct line to Ajarn Prodt. 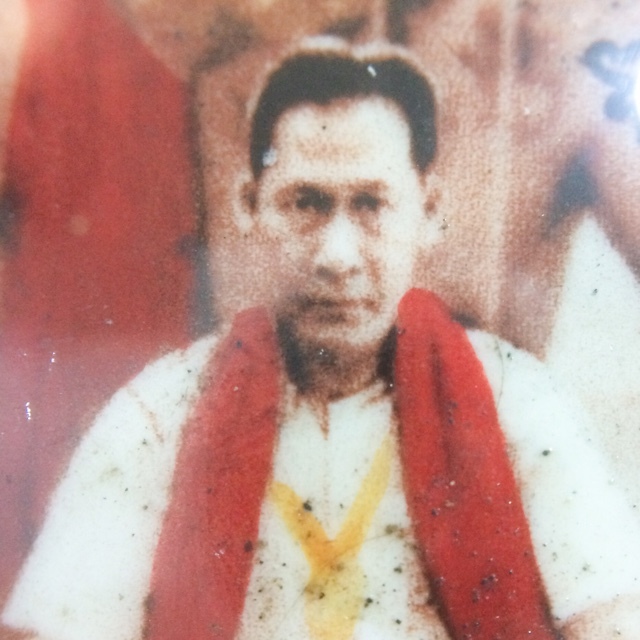 He adheres to the use of only the rarest and most powerful Muan Sarn, along with adherence to all the lengthy methods of empowerment, and Incantations, which are demanded by the Ancient Formulas of Occult Sorcery. The Lersi Phu Jao Saming Prai Hermit God emanates all powers of Serm Duang, Serm Yos, Klaew Klaad, Kong Grapan Chadtri, Maha Lap, Metta Mahaniyom, and Maha Pokasap Blessings, emanating outwards around your vicinity, to fill your aura with positive energy, charm, luck, and likeability, bring promotion, elevated status, and draw wealth and prosperity into your life. This Ruesi Hermit Sage, is also known as 'Lersi Hnaa Suea', 'Boroma Kroo Phu Jao Saming Prai', but In Traditional Thai Dtamra, his real name and title is ‘Tan Taw Himawat’ 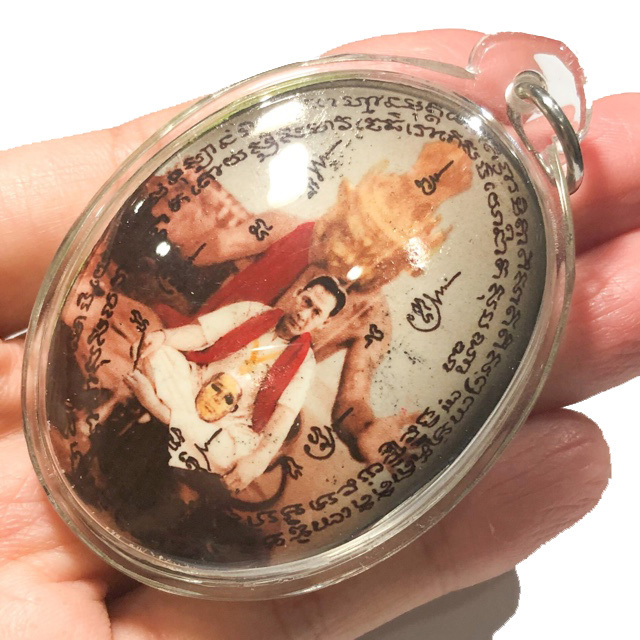 This Lersi Hermit Sage, is also known as Boromakroo Phu Jao Saming Pray. In Thai, his real name and title is ‘Tan Taw Himawat’ (ท่านท้าวหิมวัต). The language used to communicate this Kata with the Lersi Hermit is ‘Pasa Gubodte’ which is a language of the Deities. 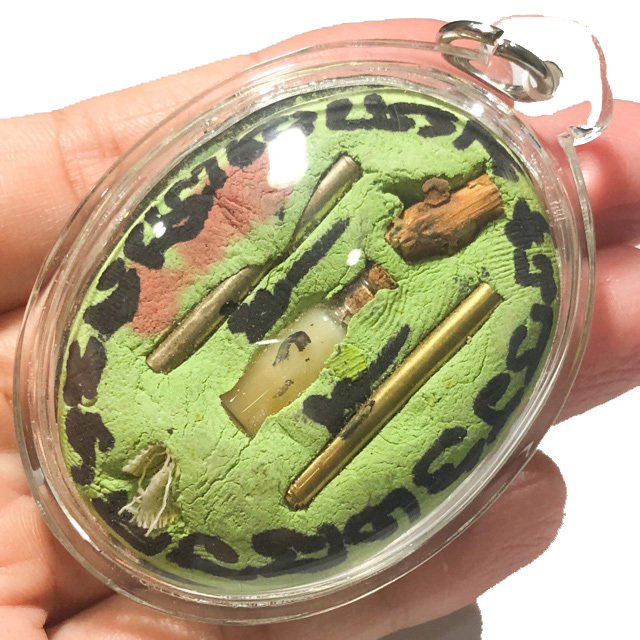 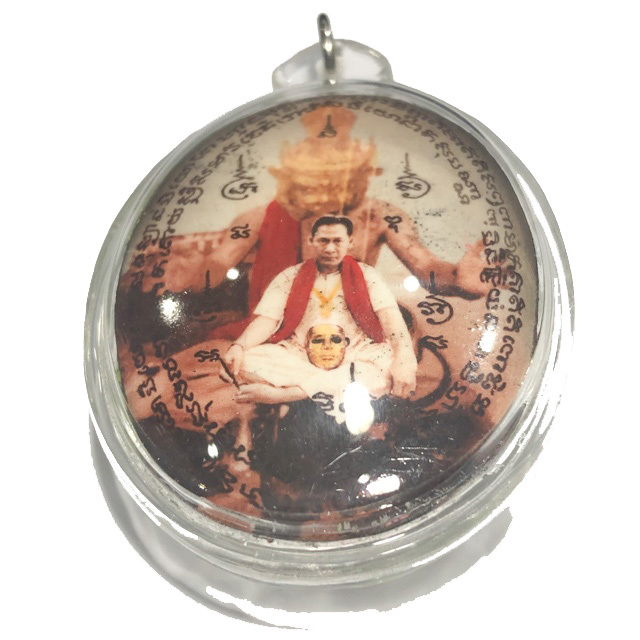 For the Prai Deva contained within the Chin Aathan and Pong Sanaeh Ya Faed Phials, you can use the below tutorial as method of Bucha once in a while. 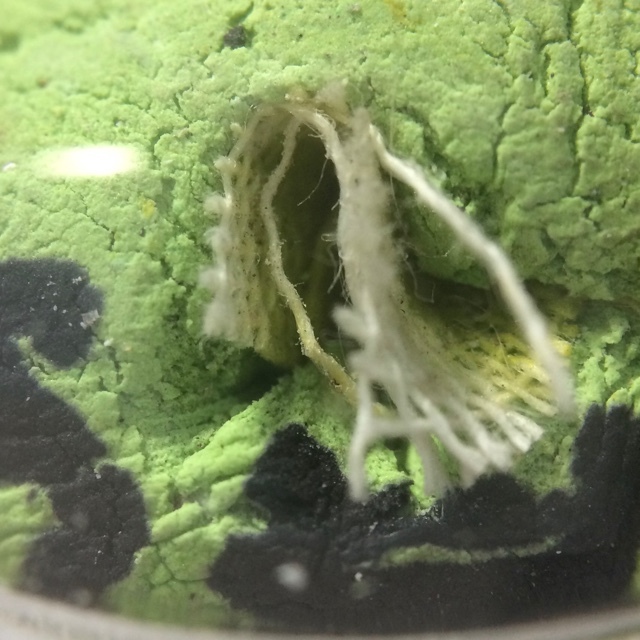 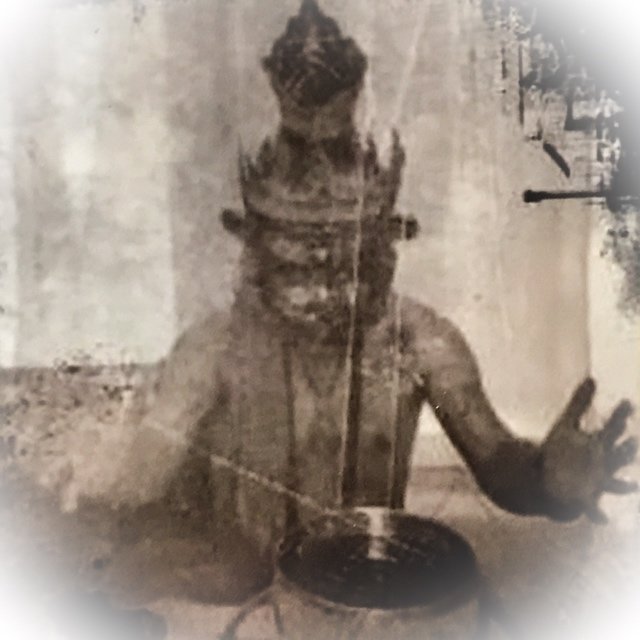 If you are a Looksit (disciple) of the Lersi, then you should never use your charm to take advantage of others or to trick and deceive people with, as this will be detrimental to the continued lineage of the tradition and will cause the Devas to depart from the Human realm as far as being present with ceremonies in reverence to the Lersi is concerned.

Ajarn Prodt is currently one of Thailand's most famous Lay Necromancers, and did have a large Samnak, but is now gone underground after coming into the Public Eye and being picked on by the local officials for practicing Sorcery. He adheres to the use of only the rarest and most powerful Muan Sarn, along with adherence to all the lengthy methods of empowerment, and Incantations, which are demanded by the Ancient Formulas of Occult Sorcery.

His amulets are only made in small numbers, with each amulet being individually empowered, and remaining faithful to the olden days methods, which are very lengthy, but are the most powerful and authentic. His amulets range from the affordable to the incredibly expensive, depending on the item in question. Some of his Spells and Amulets are one-only hand made items, which use the highest concentration of Muan Sarn Sarn, and carry a higher price than mass produced editions due to their exclusivity and high concentration of rare Prai ingredients. 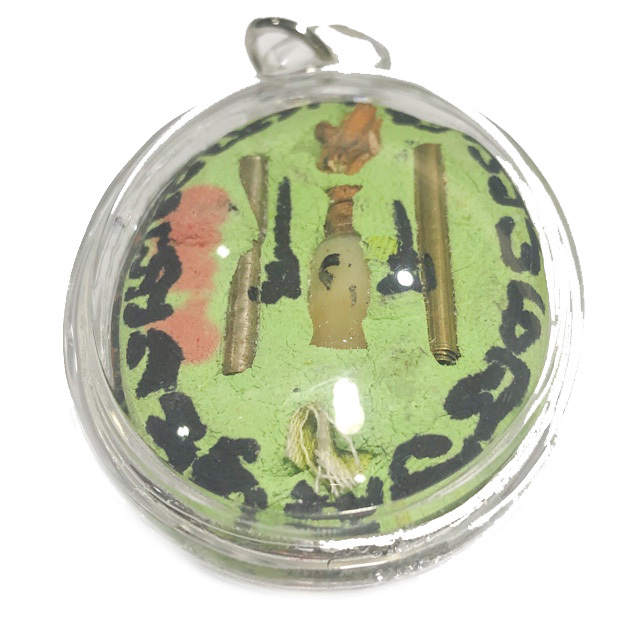 Kata for all Maha Sanaeh type amulets of Ajarn Prodt;

List of Kata and worship methods for the Lersi

Bucha Kroo Isan Style – what to Offer and Chant

In Thailand there are also various legends of “Pu Wised”, or Lersi , Arahants or Yogis. These Lersi are said to have possessed various powers, such as Knowledge of herbal medicines, minerals, magical invocations, and supernatural abilities, such as Levitation, Teleportation, Alchemy, and Mind Reading. These beings with special powers are reputed to live reclusive lives in the forest, on mountains, and in caves. They Practice Meditative skills and mental development, using secret methods passed on from mouth to ear by their lineage mentors. If you Bucha the Ruesi properly, you will find success in all your projects and attain wealth, Health and Happiness. 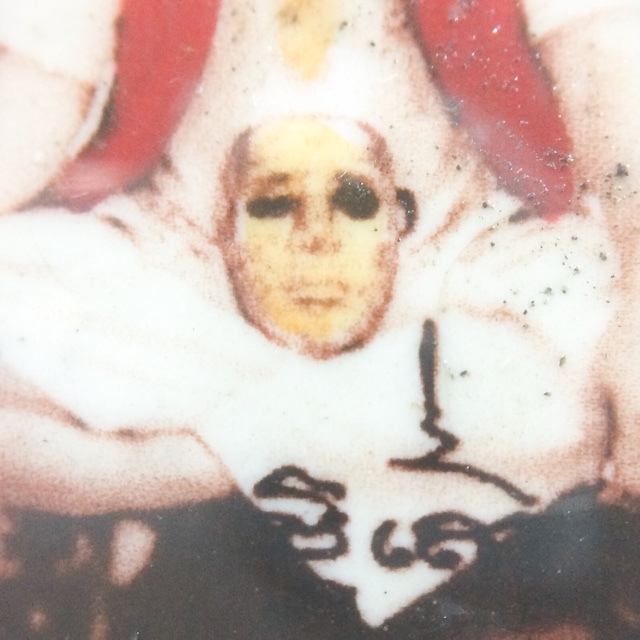 The Lersi, or also known as 'Ruesi', are the holders of the Great Kampira Grimoires, and Magical Wicha of the Dtamra Saiywaet, and are the Root Guru Masters of the Magical Tradition in Buddhist Thailand. Lersi Deva Hermit Gods are Revered in Thailand under the Name 'Por Gae'. Por Gae defends these 'Wicha' etheral knowledges from both the ignorant who wish to destroy them, as well as the ignorant not ready to learn them.

All of these blessings are given with the practice of revering and following the Ruesi Devas. It requires somewhat more effort to practice revering the Ruesi, because the practice of Revering Ruesi is a regular applied practice and you must think that the Ruesi are always with you, and that one lives and behaves as a Looksit of the Ruesi Boroma Kroo Por Gae. 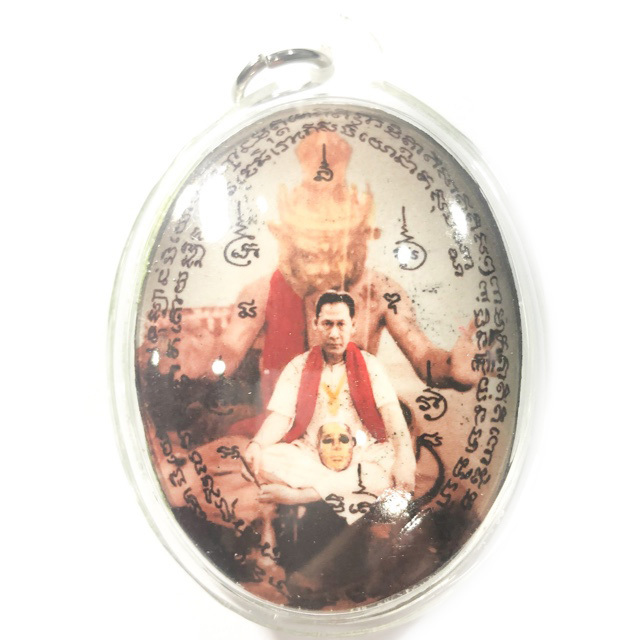 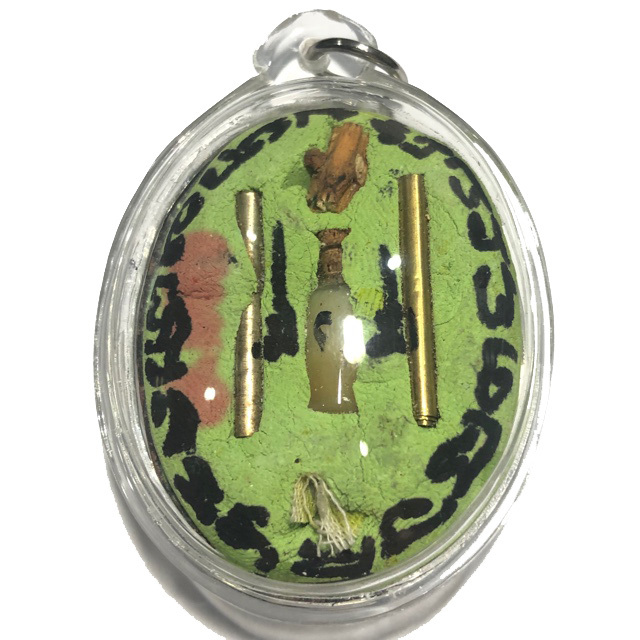 Kata to the 108 Ruesi Sages 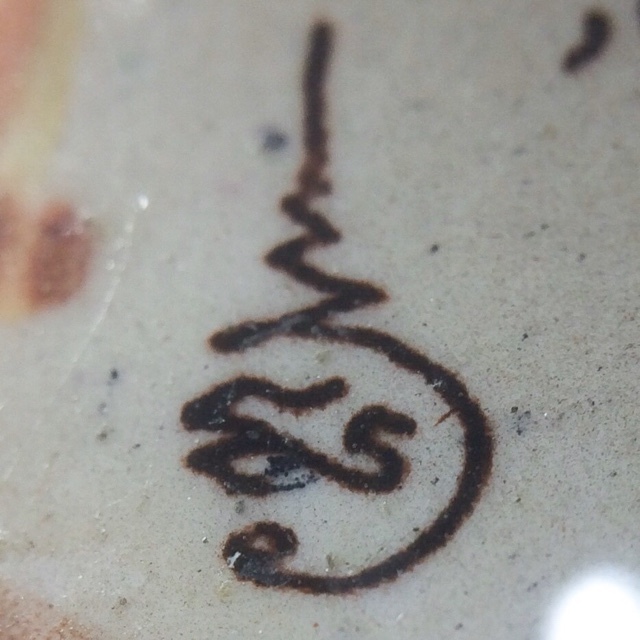 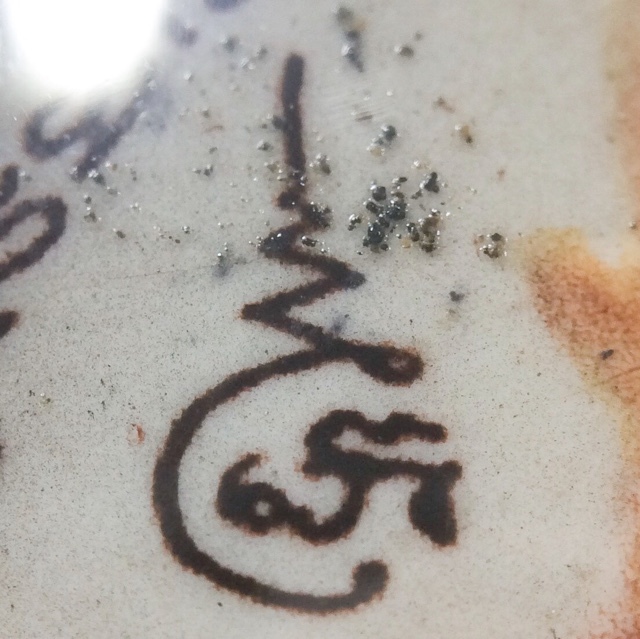