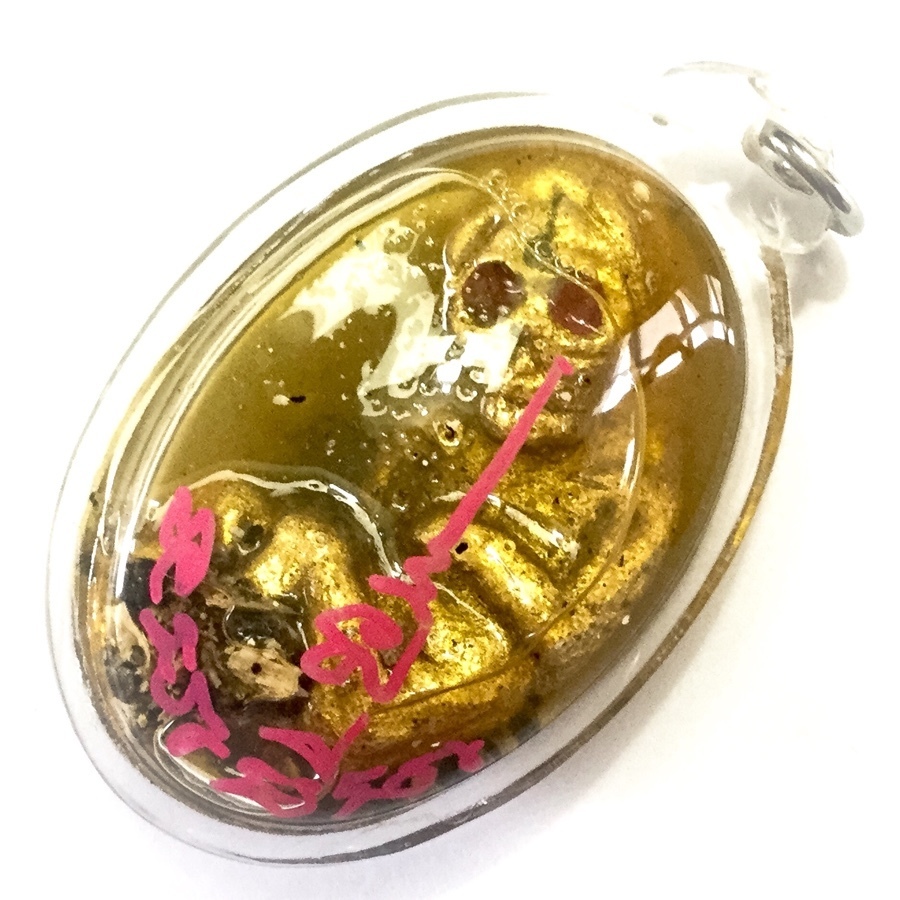 Look Krok Hoeng Prai Baby Ghost Golem Effigy, made from Necromantic Hoeng Prai Powders from the bones of a Hoeng Prai Ghost, with funeral earths and ashes. Consecrated in an immersion of powerful Necromantic Nam Man Prai Phii Dtaay Tang Glom (fatty oil Extract of the Kumarn Tong and Mother). The Look Krok is encased in the Nam Man Prai Oil, along with a large amount of sacred Prai Powders. This amulet is a powerful helper fora Lucky Windfalls and Good Fortunes in Gambling, Evade Enemies and Dangers, and a Devout Protector against Black Magic. 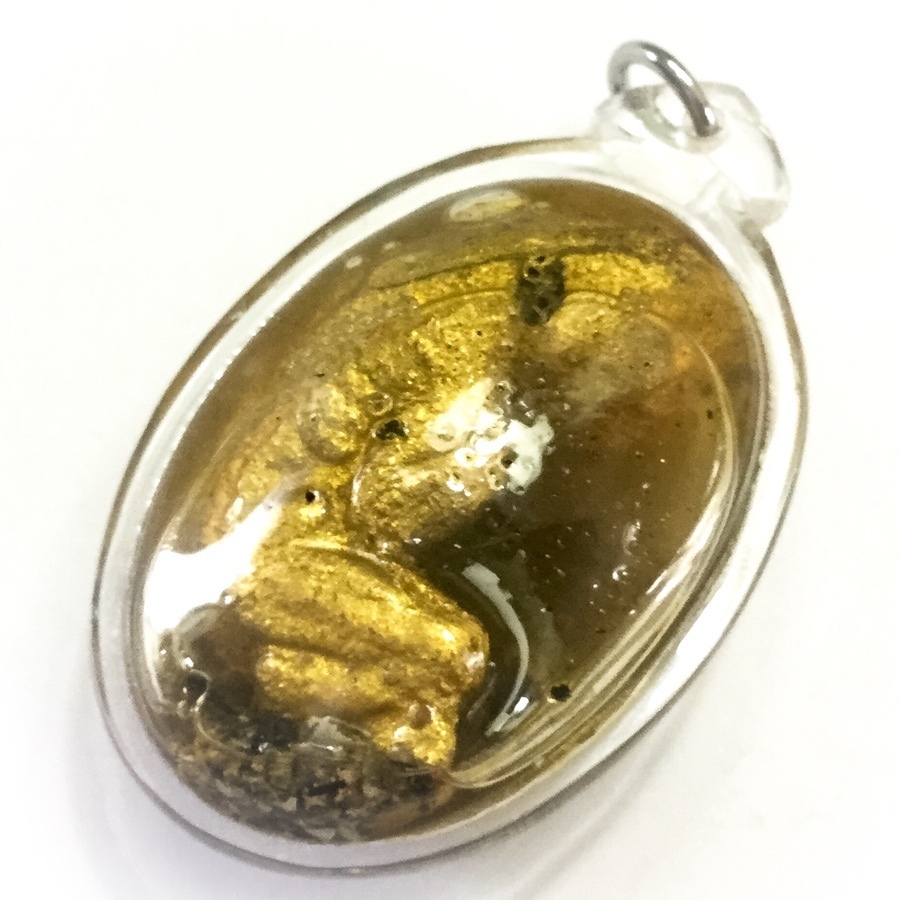 The effigy is in the form of an emaciated baby corpse, sitting in embryonic posture in the oil which consecrate it, and gazing outwards from within the womb. The corpse is curled up in the comfortable position in the womb, representing easy living and the endless flow of sustenance which comes from the mother (Maha Pokasap). 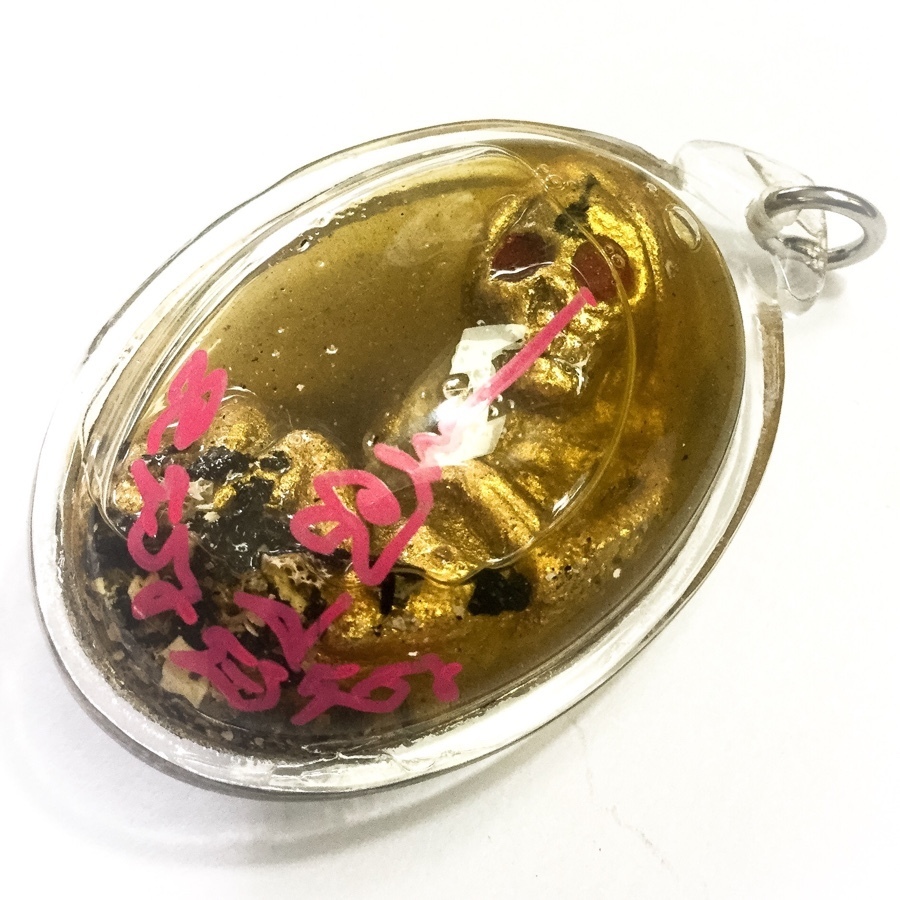 The Kata Bot Riak Tat See, Pluk Tat See, and Hnun Taat See were also invoked, to call, awaken and reanimate the four elements needed for a spirit to inhabit a receptacle. Then the amulets were molded into the shape of the Look Krok Corpses, and inscribed with further incantations in Ancient Khom Agkhara script. 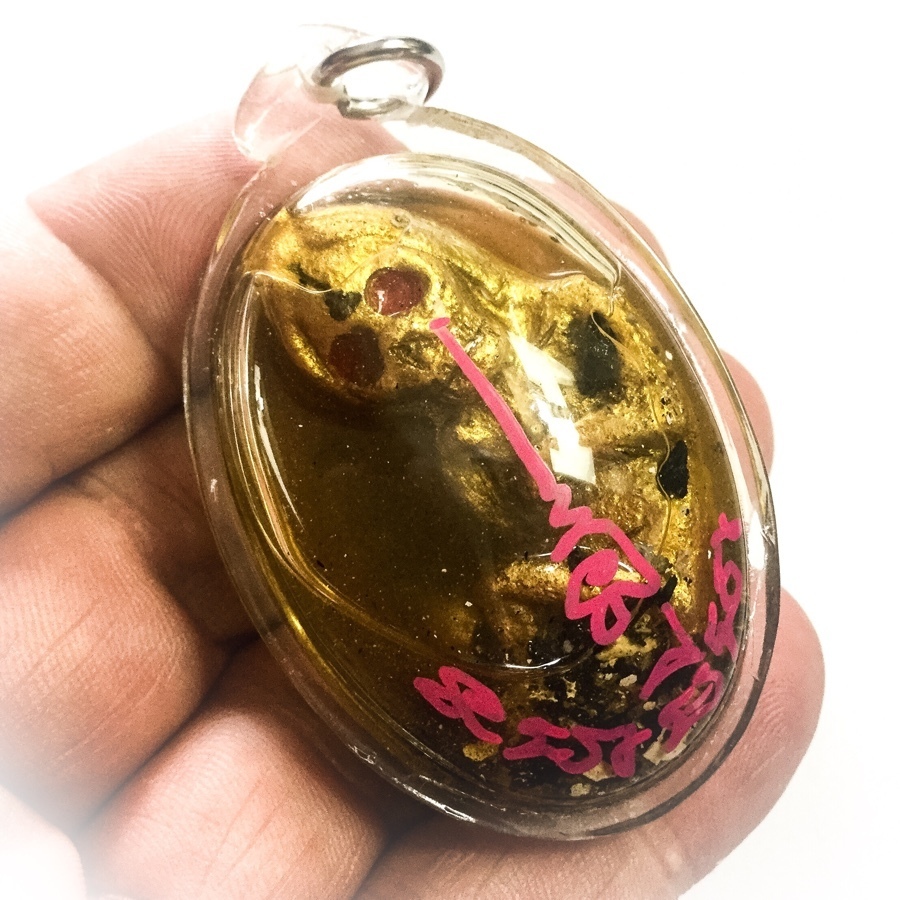 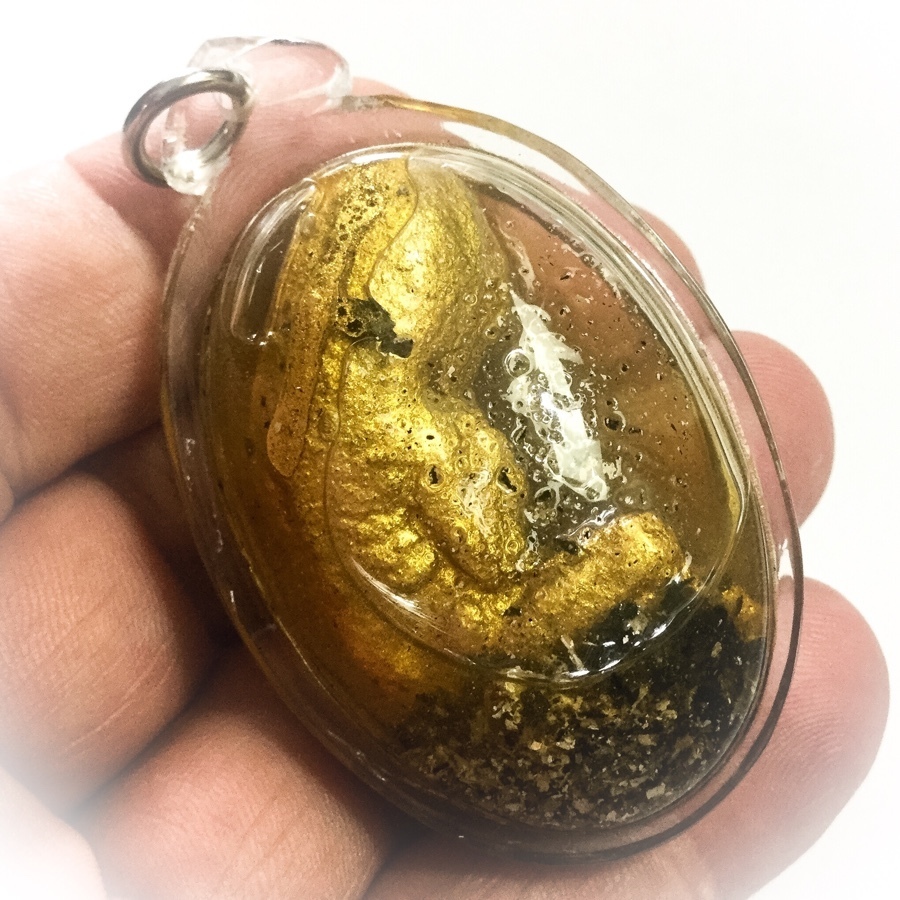 This powerful Look Krok Stillborn Kumarn Tong Effigy is made using High Necromancy of the Khmer Tradition, by Laymaster of Grand Repute, Ajarn Wirataep Yan Kroo Prasit. Made with Muan Sarn ingredients from some of the rarest, most potent, sources of Muan Sarn in his possession, with Immense Maha Lap, Siang Choke, Prai Grasip, Metta Maha Niyom and Maha Sanaeh Magic. The Look Krok is in principle a 'Hoeng Prai', who is full of Psychic Frenzy, and is primarily empowered for Ultra-Hian Power. 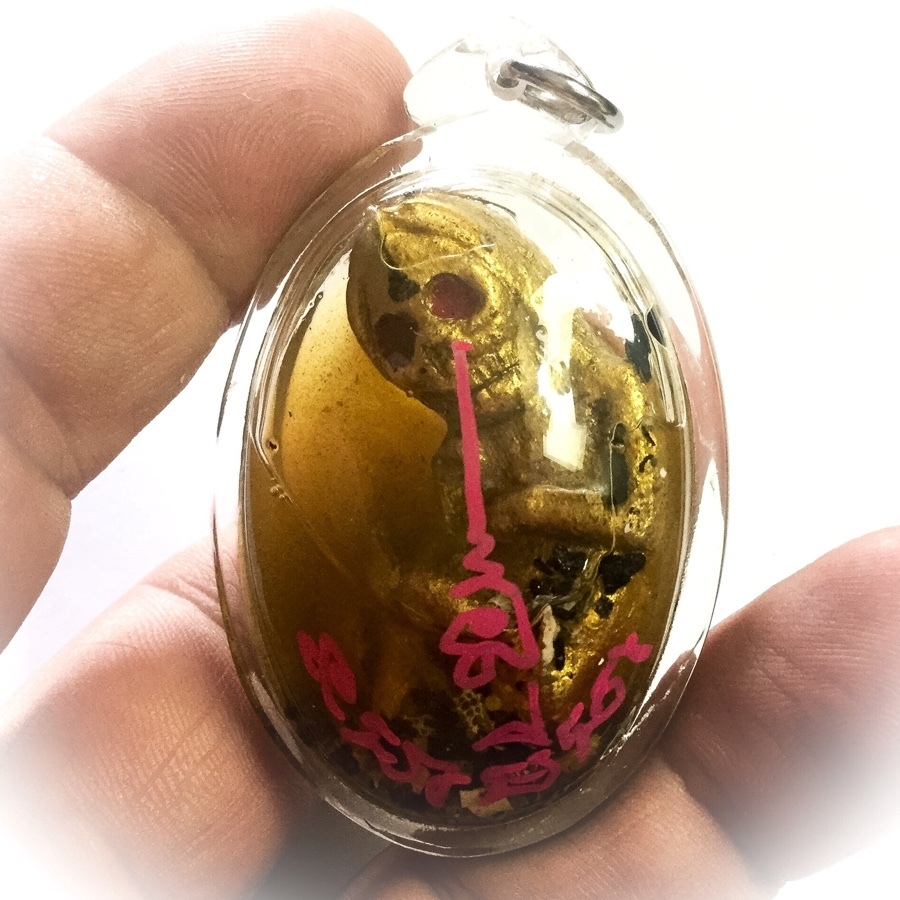 The Psychic Powers of the Hoeng Prai are both very powerful, and most probable to occur often, as the Hoeng Prai Ghosts love to perform displays of their powerful Magic, Unlike Deities and Celestial Angelic Entities, who must be coaxed into it. Angelic Deities prefer to avoid Miracle workings unless absolutely necessary.

The Hoeng Prai posesses of course, the Powers of a Prai Grasip Ghost Whisperer, and can forewarn of dangers, and even lucky streaks in gambles, and winning numbers in lottery. 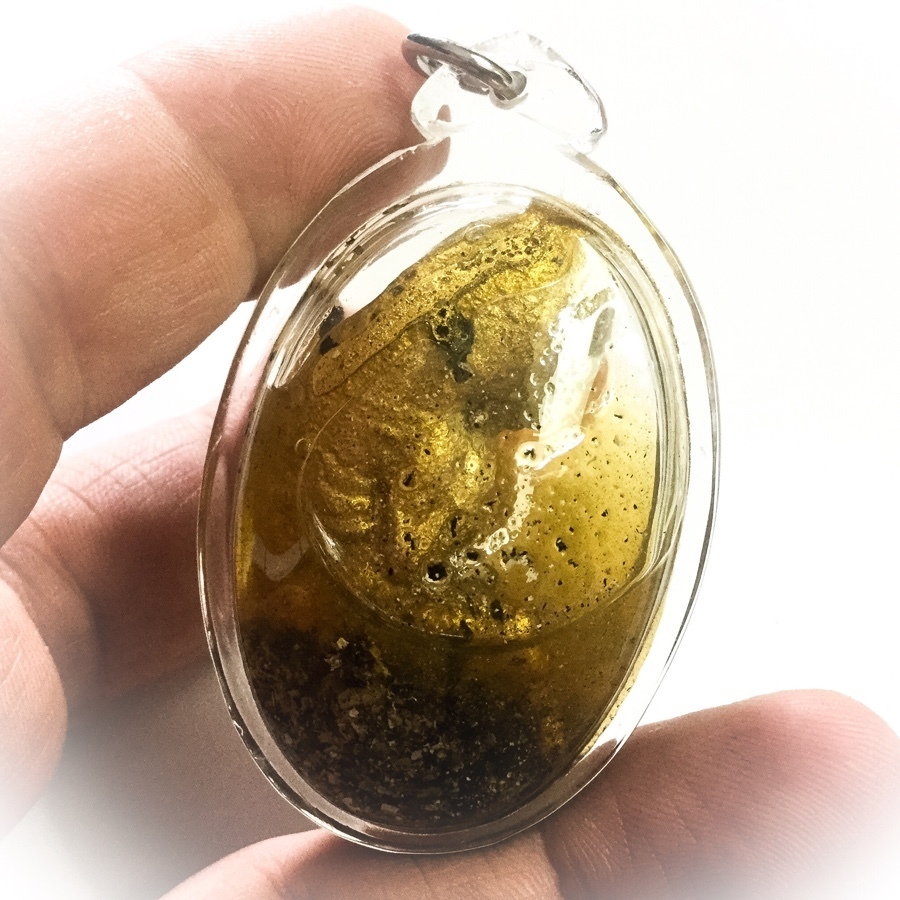 Of Prai Necromantic Khmer Sorcery, it is said to be the only form of Magic which will help amulets to work even if the Karma of the person wearing it is absolutely terrible. Only Necromancy can weaken this power of Bad Fate, it is said. 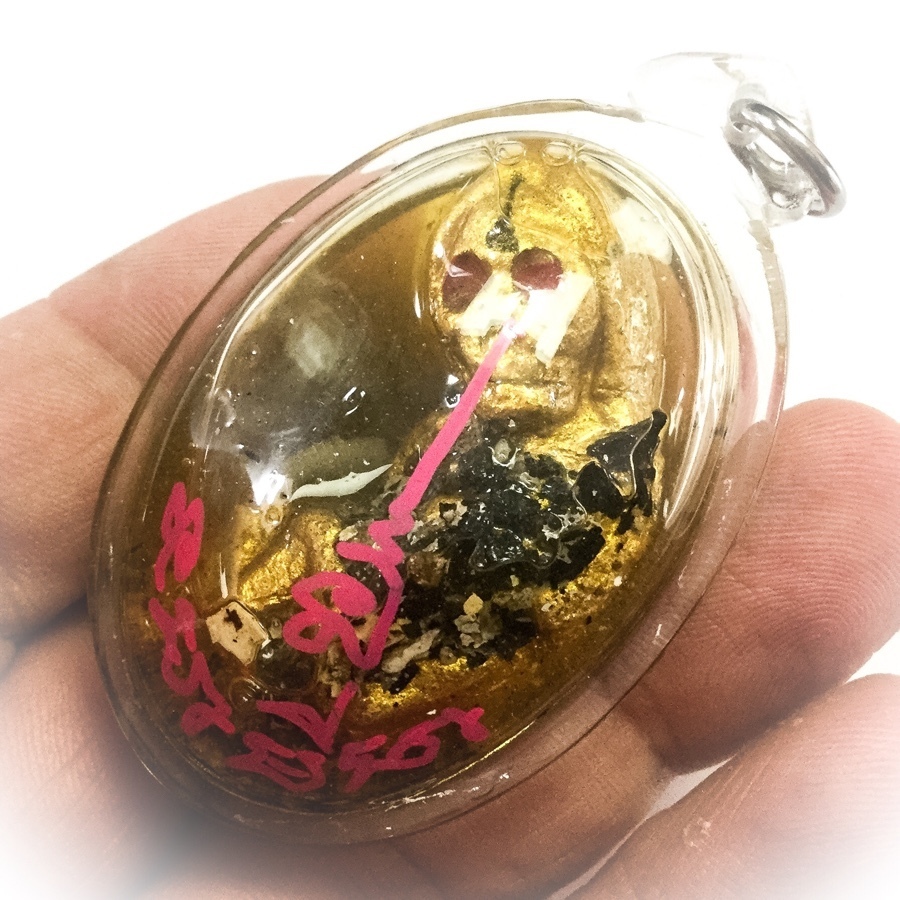 However, Our Proprietor Ajarn Spencer Littlewood, has something to add about the subject of speeding things up when seeking results;

"Remember that the practice of the Dhamma, self sacrifice, renunciation, and great efforts to leanr how to meditate, and still the mind, and to study and increase one's understanding of the Buddha-Dhamma, is one of the best ways to make merits to share with the Hoeng Prai. The Hoeng Prai is most likely to show a response when you make such Merits in Life, which are higher than any worldly Merits you may acheive, and which when shared with the Hoeng Prai, will result not only in Good Karma from your efforts in Practice of the Buddha Dhamma, but also perhaps, with Great rewards from the Hoeng Prai, who should be extrememly pleased with receiving shared Merits, of the type which carry us to the Far Shore, to Find Perpetual Unending Happiness, and Absence of Suffering". 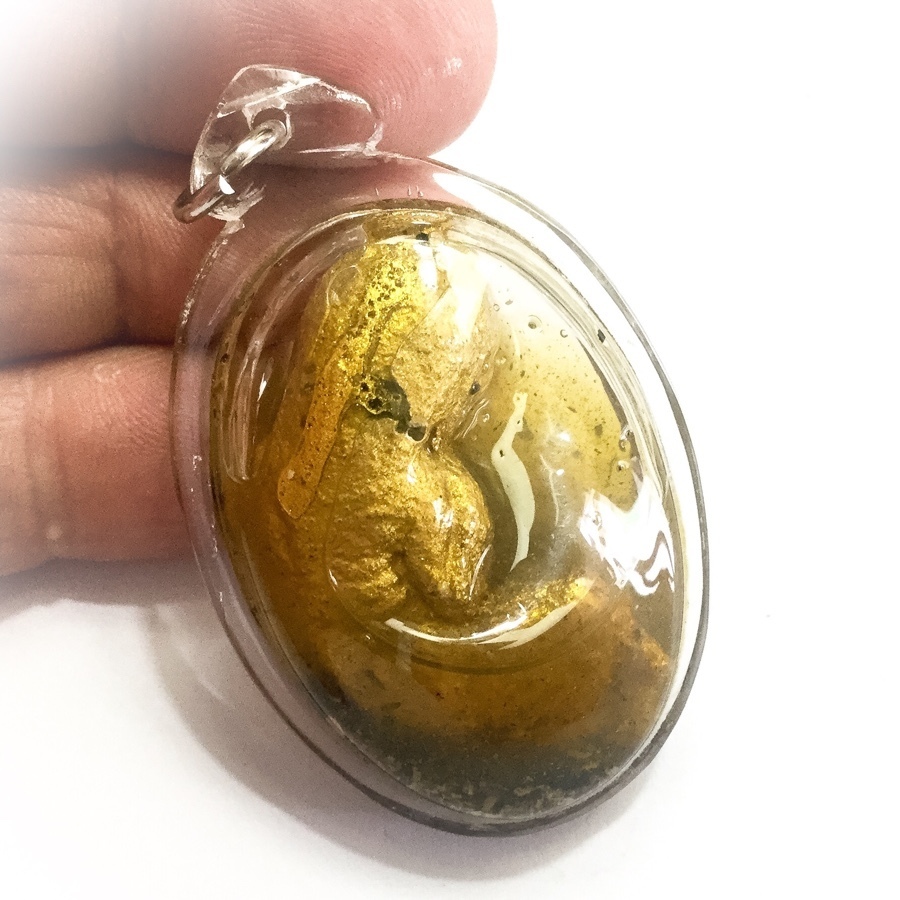 Kata Bucha to ask the Hoeng Prai to perform Missions.

Offer whisky (one small glass), Light one stick of incense, and chant the following Kata;

Chant repeatedly until entering a focused rhythm. Once you have achieved this, you can silently chant it throughout the day whenever you feel inclined to use the magic. 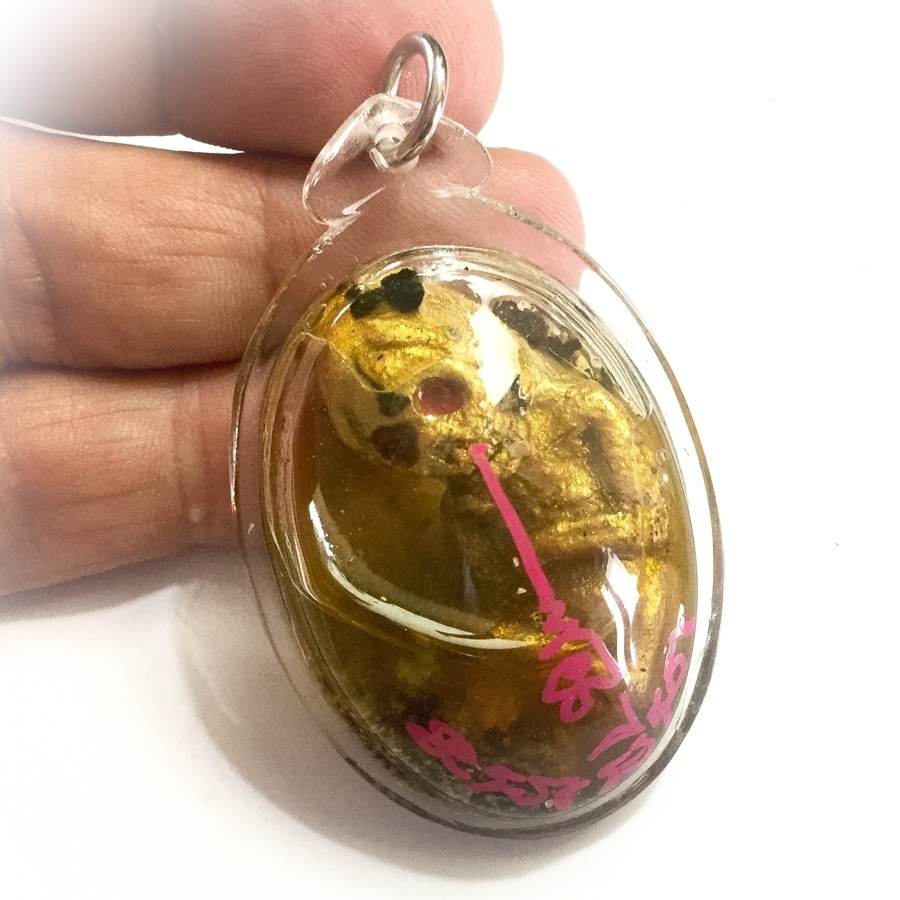 Ajarn Wirataep is highly acclaimed, widely accepted and famous, for his ability to communicate with beings in the spirit world, and to convince and connect with them to inhabit inanimate objects. This has converted this Adept Necromancer, into one of Thailand's greatest and most famous and popular masters of Sorcery and Necromancy in the present era. 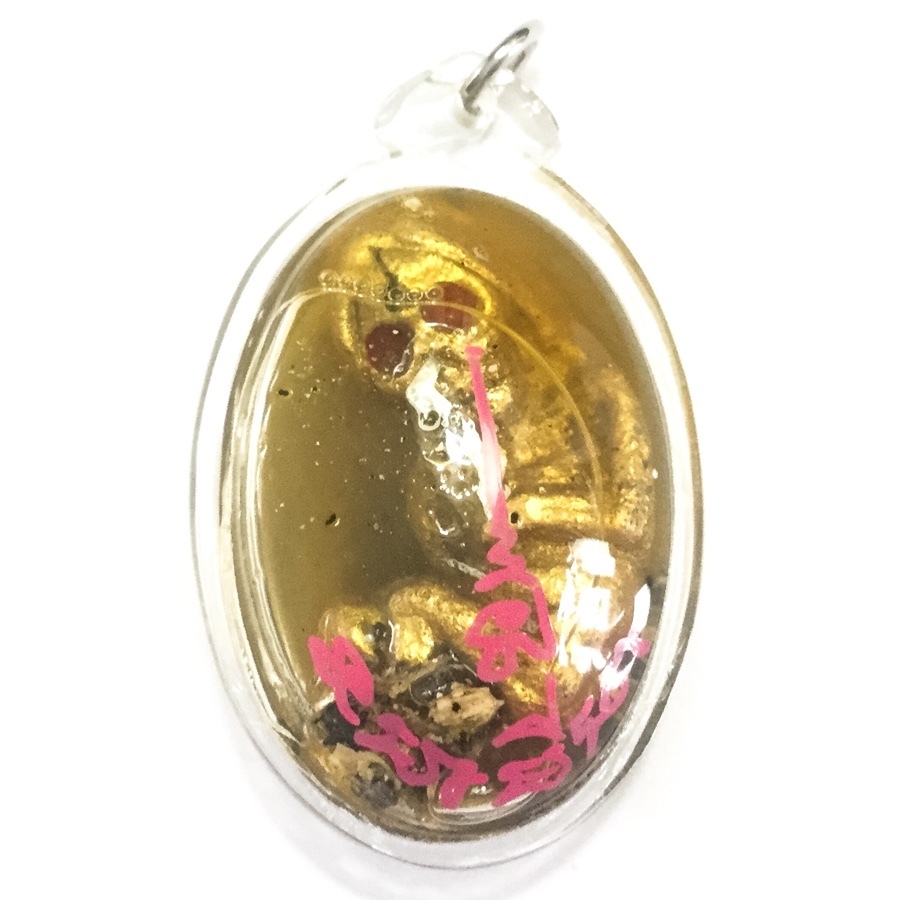 His Kumarn Tong and Prai Ghost effigies and Wicha Maha Sanaeh, is well known through the stories of those who have used his amulets, lockets, and Necromantic oils, to gamble with, and to improve profession or love lives. 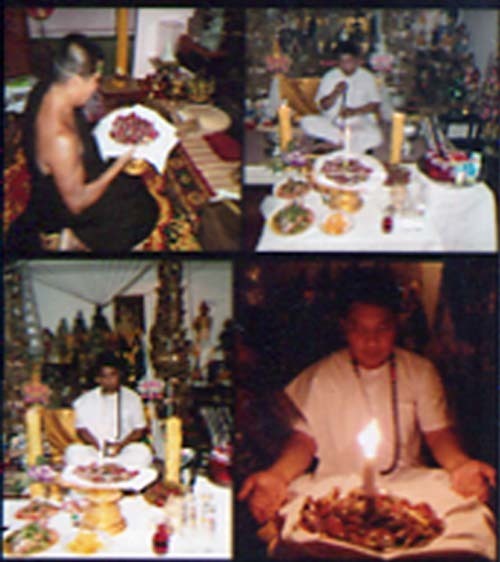 Ajarn Wirataep is the Looksit of Luang Phu Tao of Wat Khao Grating (Lopburi). Luang Phu was responsible for training him in the use of Magic for riches, as well as the powerful methods of empowerment, such as the Kata Dern Taat (make the elements flow) and be inserted into objects. 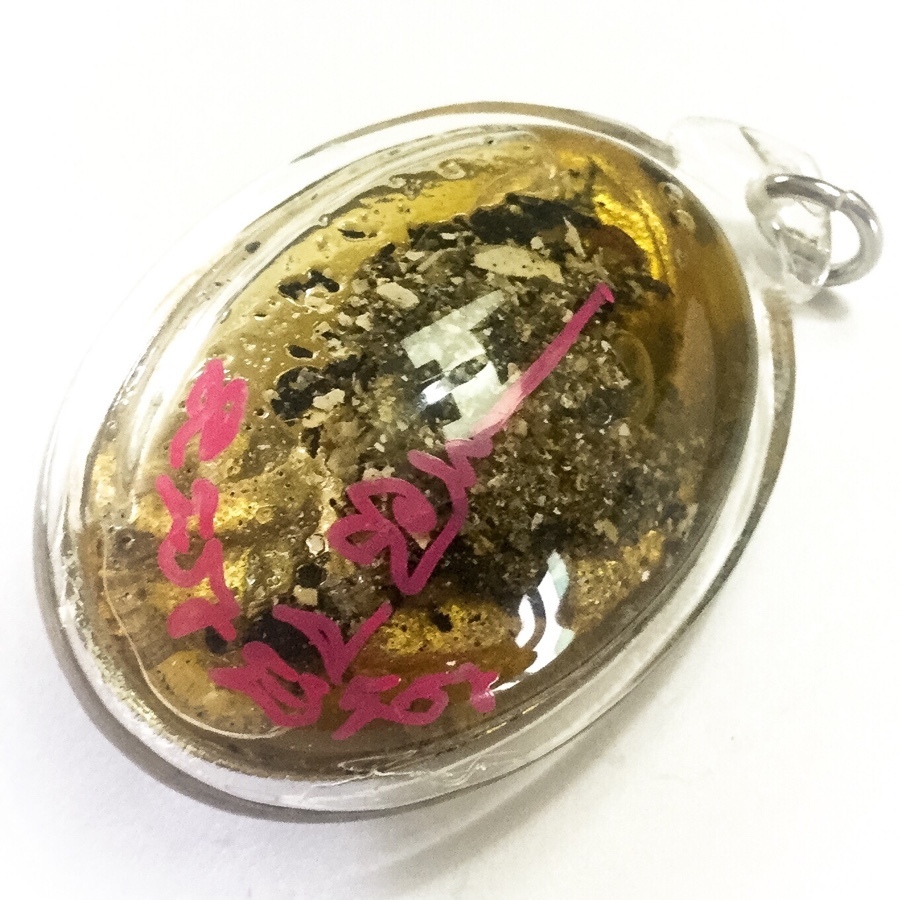 He learned how to master many Wicha with Luang Phu Tao, including the practice of 'Lob Pong' (writing sacred spells and wiping the chalk off the board by writing more spells on top. The powder chalk which remains is then used for amulets). Before that, he already practiced and studied Saiyasart (Thai magic) with Luang Phu, who was a Master of Prai oils and Maha Sanaeh magic. 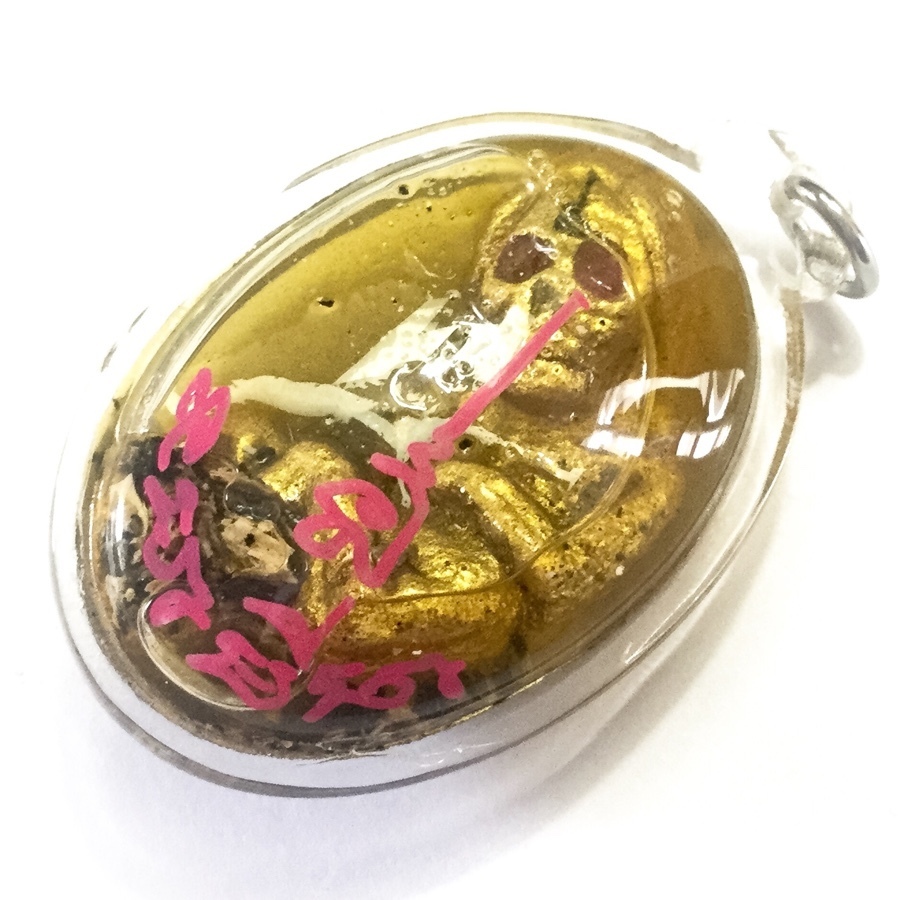 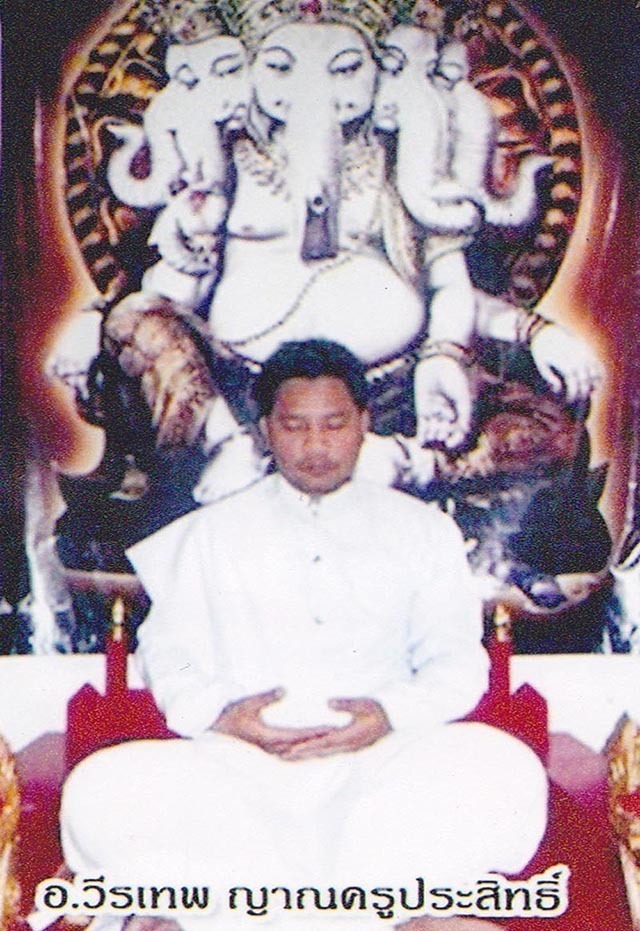 Facts you may not know;

The word 'Necromantic', and the word 'Romantic', have magical associations which are unknown to most people, and this second meaning, is a part of the reasons why nNcromantic amulets are so powerful when applied for Maha Sanaeh Magic. 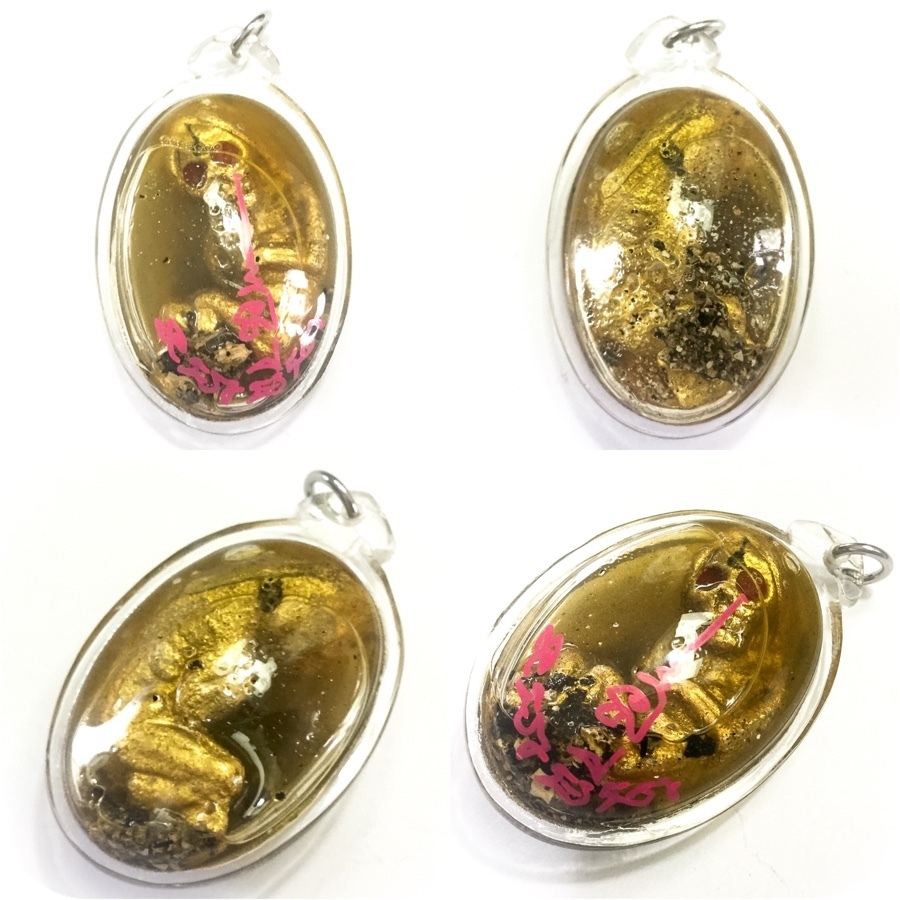