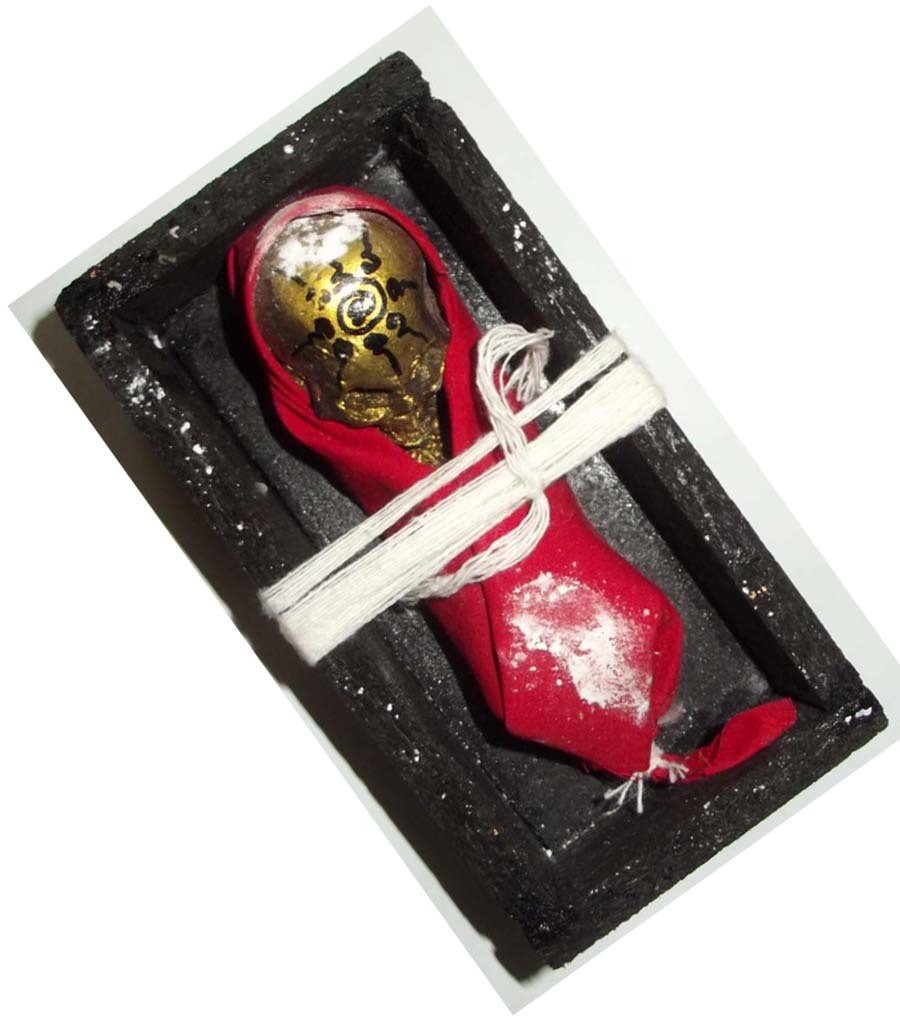 The Look Krok Loeng Dam Necromantic Effigy in Coffin, has its head filled with powerful Sorcerous Powders and Earths, including powdered Look Krok, Cemetery earths and Funeral Ashes. This Necromantic Bucha Effigy is Ajarn Taep's Pride and Glory in this Special Edition made according to his strong wish and incliniation to create this Wicha. This series of Look Krok sold out in the first months of release in 2555 BE, making this Bucha Item now an extremely rare and highly sought after Bucha Statue with devotees of Ajarn Taep. Considered to have come from his most powerful Era of Magical practice, when high necromancy was his fortitude.

A Magically Powerful Necromantic Spirit Guardian to protect the house and call money, and instigate the causes of prosperity. The Look Krok is housed within a coffin made from the wood of a coffin of a Phii Dtaay Tang Glom (Kumarn and Mother), is wrapped in Magical red Cloth for binding the spell, and then bound once more with Daay Mad Tra Sangkha, a white cord popular with Sorcerors for making magical binding spells. 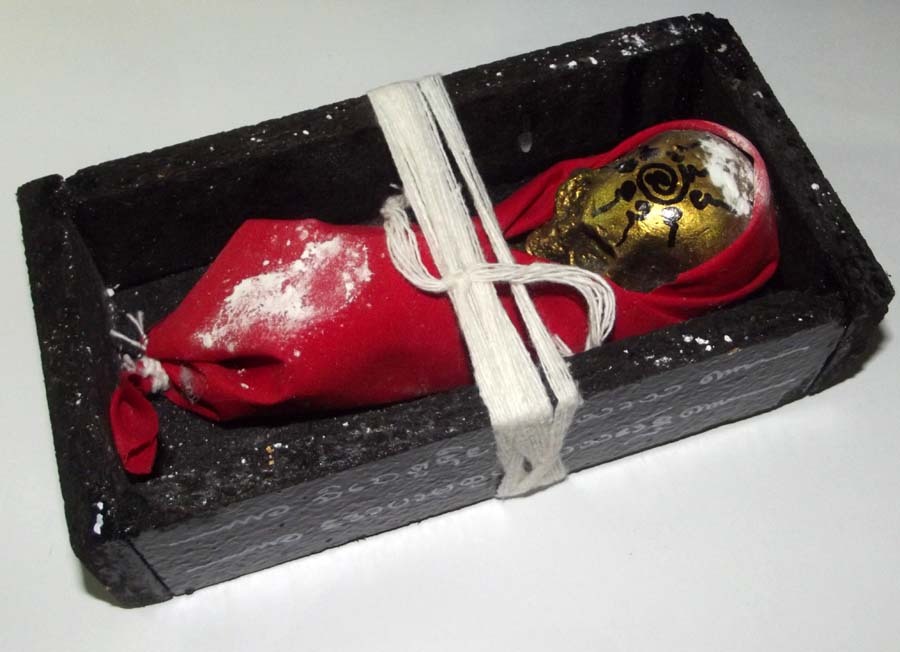 The edges of the coffin are inscribed with sacred khom Agkhara Spells in Khmer Necromantic Wicha. 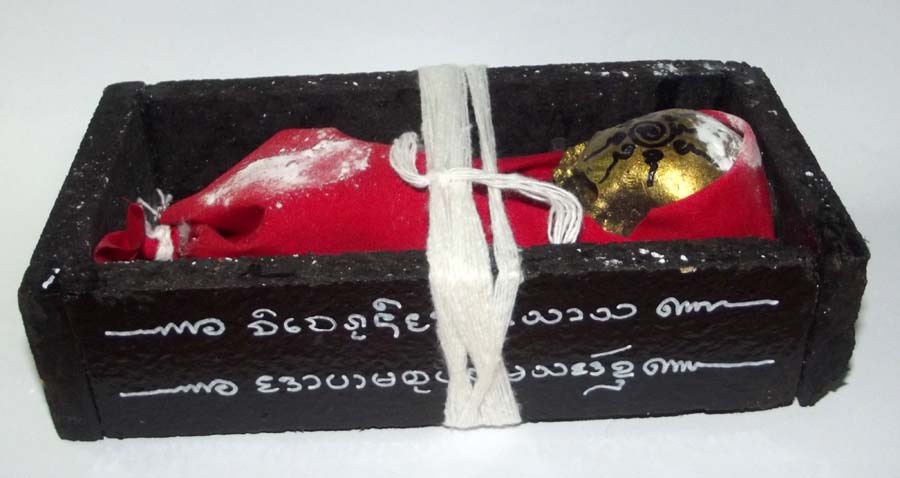 The head of the Look krok is a Powerhouse of Prai Hian Power, that is immensely prone to perform shows of its power. This is the benefit of Prasi Hian Spirits who have extremely strong Psychic Powers due to the violent or sudden deaths they underwent, and the subsequent anger of being robbed of their future in life. 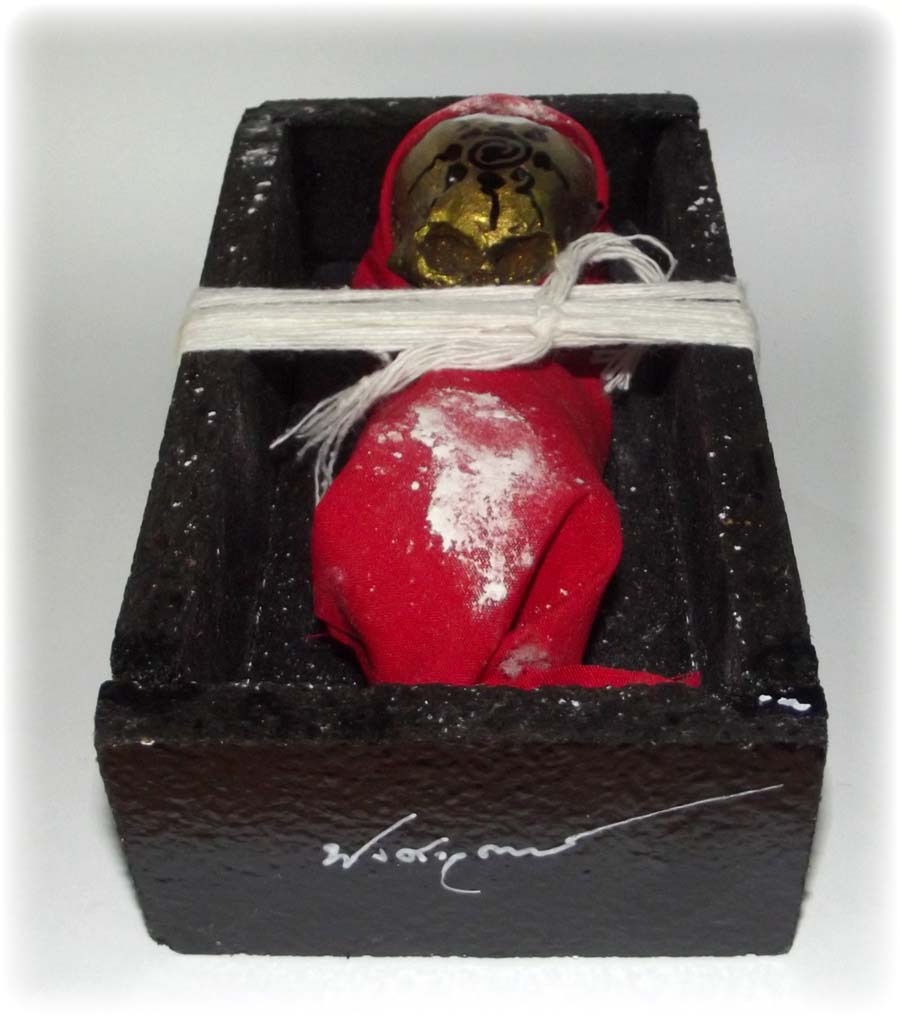 Bucha the Look Krok by giving him red syrup drink or red fanta (or strawberry, or other red juice if not available), bananas, rice, and a boiled egg, with one stick of incense (stick in the egg).

Light One Stick of Incense a day for the Kumarn brings Great Blessing.

Light Nine Sticks of Incense when Asking for Luck or Increasing Your Fortunes.

Ligh 12 Sticks of Incense when Asking for Help to Solve Problems and Remove Obstacles.

Kata to Call the Look Krok to Come to You.

(Use to make wishes and ask for Lucky Blessings, or to win the Hearts of Others).

Before Chanting Kata and Bucha offerings to Kumarn Tong, Look Krok, Prai Faed, Prai Oils and other Prai or Necromantic Amulets, you should always chant the Maha Namasakara (Namo tassa) to Lord Buddha before any amulet chanting

How to Chant Namo Tassa and Refuge in the Triple Gem