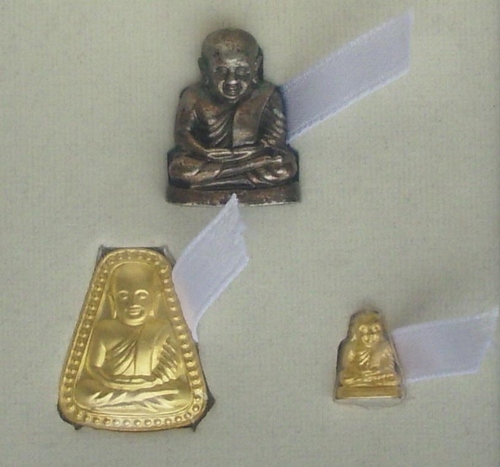 Up until 2553 BE, all LP Ngern amulets of Wat ban Klan were always casted at other temples. The first ever casting ceremony at Wat ban Klang was held last year. This edition of Luang Por Ngern Amulets was given its first Puttapisek Empowerment Ceremony at Wat Tay Nam on 11th October 2551 Be and the second empowerment Puttapisek was held at Wat Nong Nai Dong on the 8th November 2551 BE.

Only 1000 of these triple amulet sets were made in a special Gamagarn edition, and is a special collectors edition which is destined to become one of the classics of Thai Amulet History. A wonderful acquisition to keep for later generations in your family to Bucha, which will steadily increase in value as time passes.

The Larger Loi Ongk is covered in Ancient Silver coating and the two golden ones are gold plated with 'tong pon sai' (matt gold plating). All of the amulets have a sacred Yantra embossed on the base, or on the rear face in the case of the medallion.

This set comes with various free extra presents from Thailand-Amulets;

This set bears the limited edition code number 197 being the one hundred and ninety seventh of 1000 made.

The set consists of two loi ongk statuettes and one 'Rian Job sam liam Khai Pla' (flat triangular medalion with 'fish egg' markings on the rim). The large Loi Ongk statuette is made from Albaca and is a Pra kring (has a bell in the base with a sacred object inserted which rings when you shake it). Pra kring recieve a special empowerment and making process which is considered extremely sacred and powerful, and whose method and content of the Kring is something of a secret except to those who have the wicha of making such amulets.