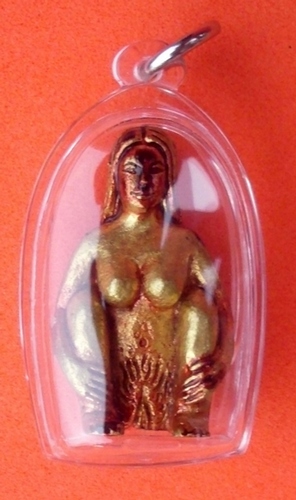 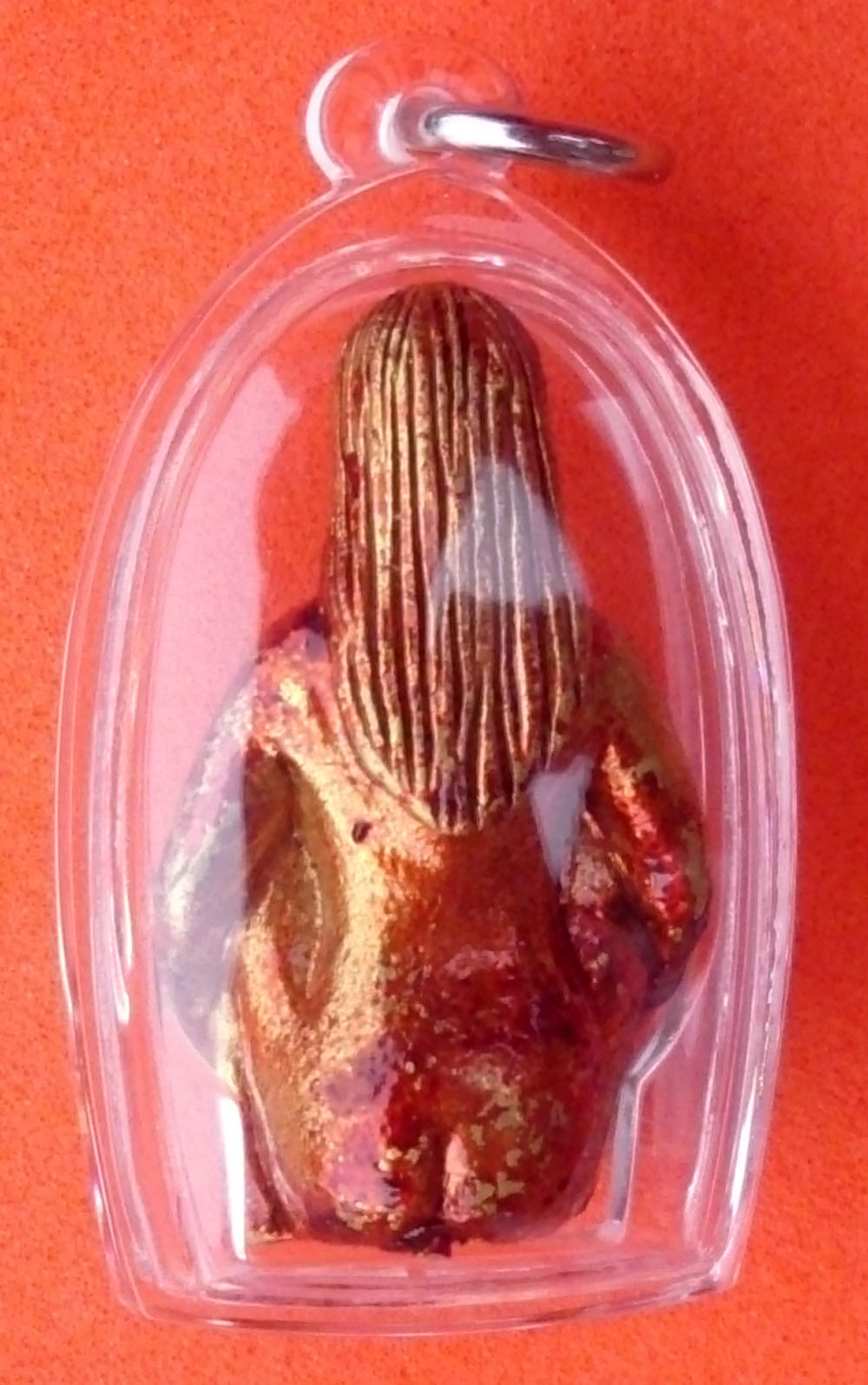 The amulet is forged from various magically empowered metal foils; 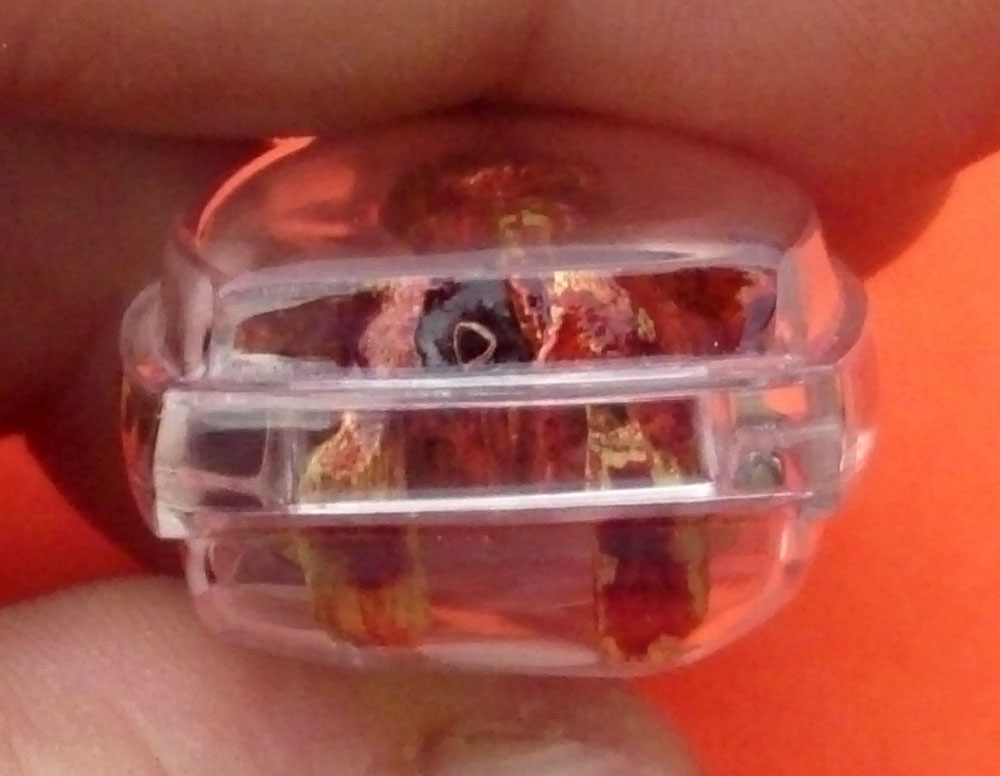 The Base has a silver Takrut inserted.

What is Mae Bper?

Mae Bper is an effigy in the form of a woman sitting in the act of giving birth. She is in great pain. The ancient Masters created this Animist magical assistant for increasing luck and wealth, and protecting agains black magic and evil entities, ghosts and demons.

It is necessary to have truly mastered the Wicha of Mae Bper in order to make one of these effigies really work, which is why only few Masters produce this kind of magic charm. Luang Por Goy is one of the few Masters alive who has mastered this ancient Khmer Wicha. He used this Wicha which he had recieved through the lineage of Masters to invoke the Mae Bper and empower the amulets  using the correct traditional method of invocation of the Taat See (four elements of all matter) and 'Aagarn 32' (the 32 characteristics of a living physical incarnate being). Only when these two aspects are mastered can the effigy be awoken and activated. 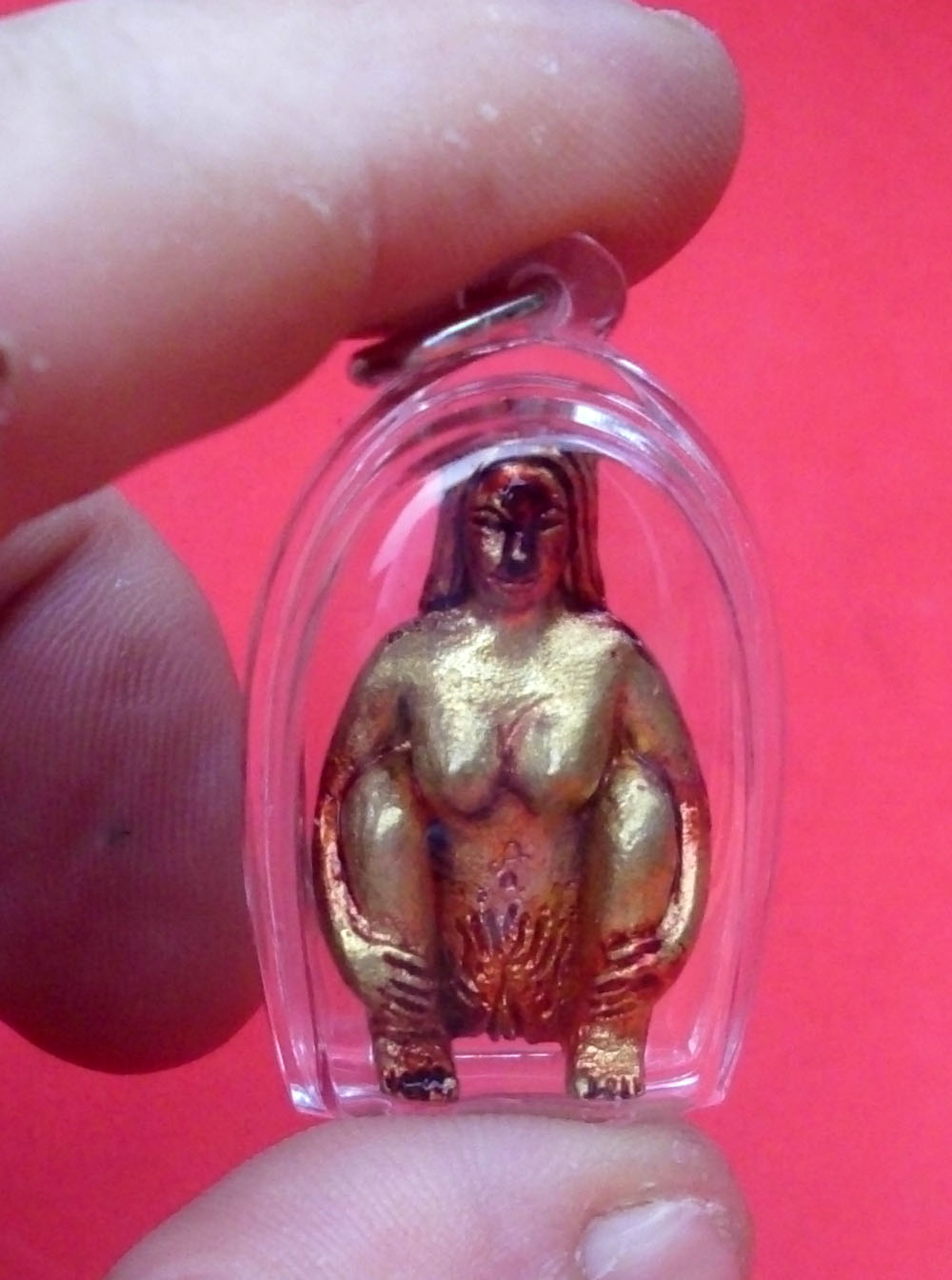 Luang Por Goy then performed the consequent formulas and calling out of the name of the Mae Bper, and then began to empower the amulets with repeated incantations over the whole year, using the following spells as Kata to empower with;

After this was completed, he took the amulets and filled them with Pong Nang Ok Dtaek (heartbroken lady powder), which is a sacred powder that has a very strong effect on the opposite, and same sex. This amulet is thus useful asa love charm for both Men and Women, Heterosexuals or Gay people.

The amulet protects not only against black magic, but has a four sided power to assist , be it in Romance, Business, Safety or Conflict.

If you rub the amulet along your left side, it will evoke Metta Mahaniyom and Maha Lap power and attract friendliness, helpfulness from others, who will feel attracted towards you or your shop, and improve business sales.

If you rub the amulet on your front side, it will evoke Kong Grapan, maha Ud and Klae Klaad power, which will protect you froom weapons, dangerous accidents,sharp blades, and black magic.

If you rub the amulet on your right side, it will evoke the power of Maha Sanaeh, Maha Jang Ngang, and Maha Hlong to attract lovers, and give you the advantage to charm others of the same or opposite sex

If you rub the amulet along your back, then it will evoke the power of Maha Amnaj, Maha Sanaeh, Choke Laap and Klaew Klaad, enabling you to win difficult discussions or conflicts with Oratory skills of speech, and be able to get your point across with the most stubborn and difficult of adversaries.

Once the amulets had been stuffed with powders and further given incantations, they were soaked in 'Nam Man Montra Maha Sanaeh' - a sacred charm oil given Maha Sanaeh incantations and magical herbs added, along with a mix of other powerful oils and potions which were mixed into the formula.

This oil is composed of various other oils including;

All of these empowerments have resulted in an amulet bursting with power to assist in four important aspects of life, and a magical guardian to ward of evil, black magic and evil eye.

How to Chant Namo Tassa and the Triple refuge