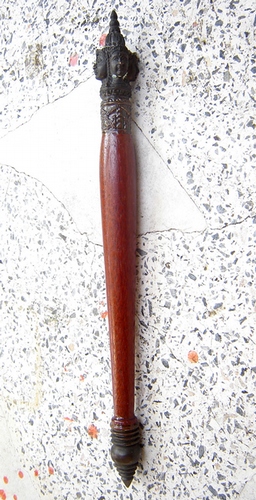 This extremely rare and powerful Brahma Wand for blessings and protective spell casting from Luang Phu Hmun is a Masterpiece Item for Bucha or Active magical practitioners to use as a Ritual Tool. 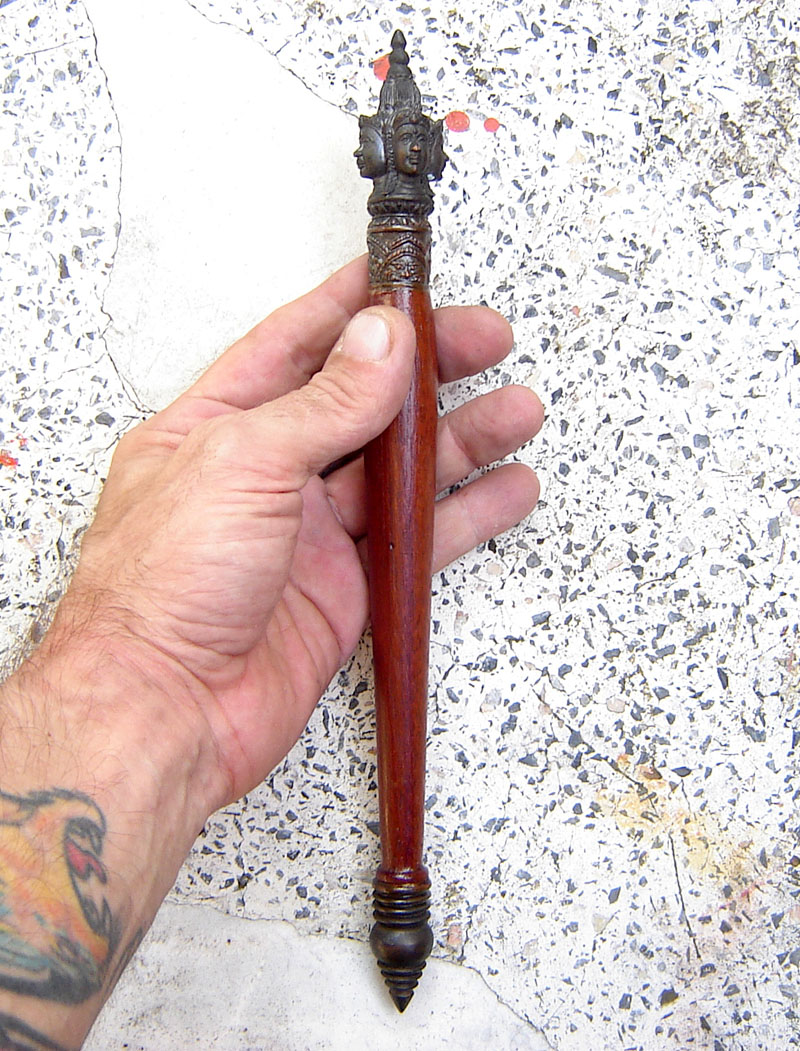 Made in 2546 BE was made from Chanuan Muan Sarn (sacred metals) from Miracle Monk 'Luang Phu Hmun' of Wat ban Jan, and was made to celebrate the erection of the Chedi Stupa and casting ceremony of the Main Buddha Image. This edition is called 'Amadta Thaera Thidtasilo Aayu Yern Hmun Choke' (Immortal Master Thidtasilo, Long Life and Increase Luck). 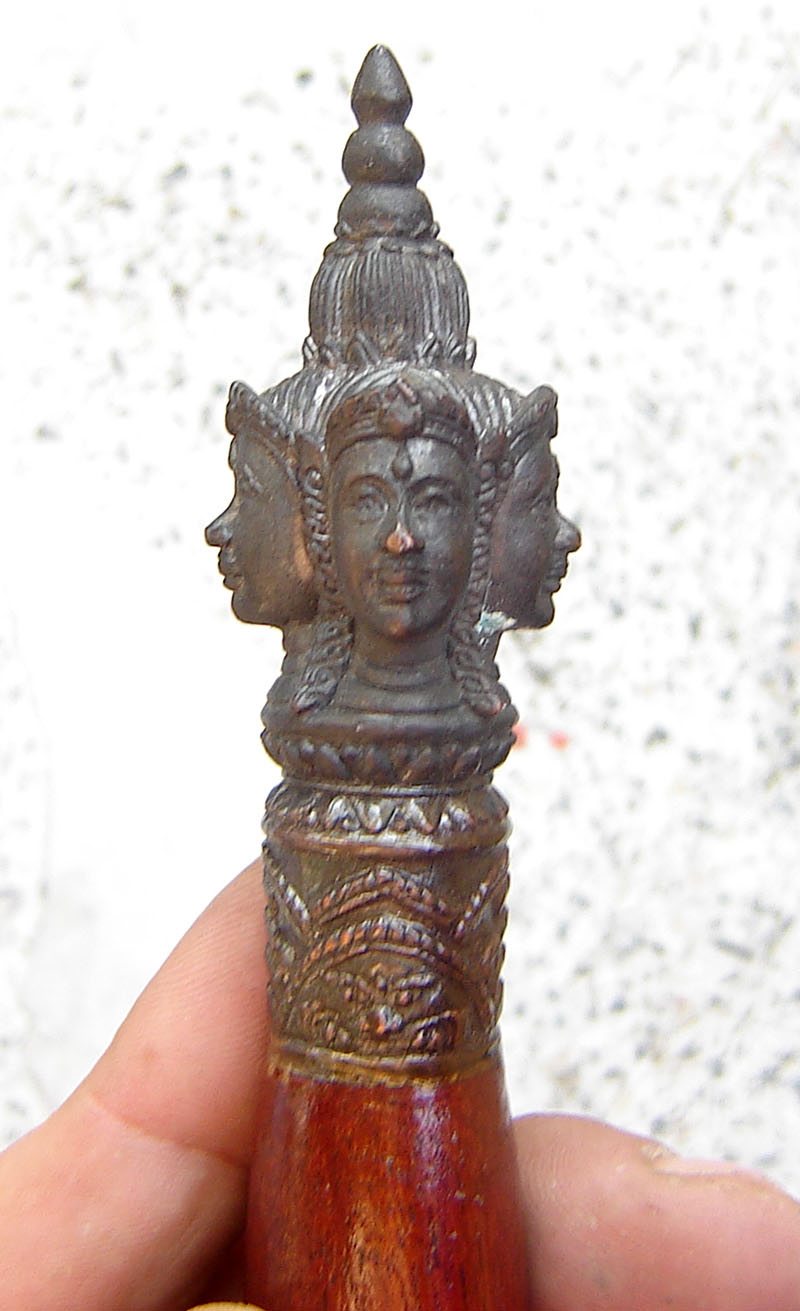 Luang Phu Hmun (109 Years since his Birth), of Wat ban Jan, Sri saket, is the Looksit of the Lineage of Somdej Lun of Jampa Sak (Laos). He began to Build the Chedi at Wat Ban Jan as a Buddhist Bucha Relic, and for placing his Remains in after his Passing. he told his Looksit that his corpse should be placed in the coffin and then taken to be stored within the Chedi. 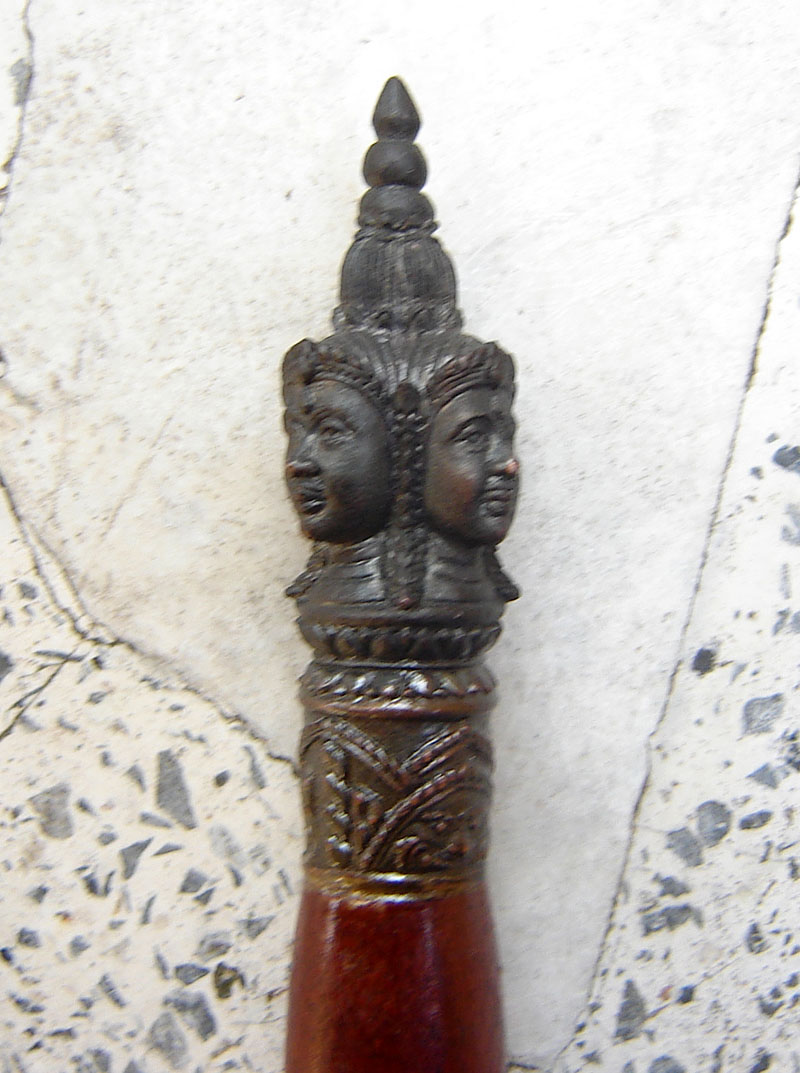 The Mai Kroo was commissioned by Luang Phu Hmun before his passing away and was finished according to his orders and Given Empowerments with a tewapisek Puttapisek blessing ceremony in 2546 BE. Luang Phu Hmun was a Maha Thaera Guru Monk of great age and who recieved Great reverence and Respect from the people of Tambon Jan for his Diligence and Puroty in practicing the Vinaya as a Buddhist Monk. His Miracle Powers are Legendary, with so many stories of Miraculous events related to this Monk, who has seen the Reign of Five Kings in his Lifetime.

A rare and Beautiful Masterpiece of a Wand, in true Limited Edition from one of Thailands most Revered Monks. This is an Essential rarity and is to be seen used by some of the Country's Greatest Masters. This Item is constantly increasing in price as it bvecomes ever more difficult to find. With only 499 of these original pieces made, it is surely understandable that most of them landed immediately in the Ashrams and Samnak of popular Master Ruesi and Guru Monks, for they are real and powerful magical instruments intended to be used for their specific purpose, and not a showcase item or souvenir.

This Mai Kroo is already classed as a rare and Classic Piece of Importance in the Amulet Community. 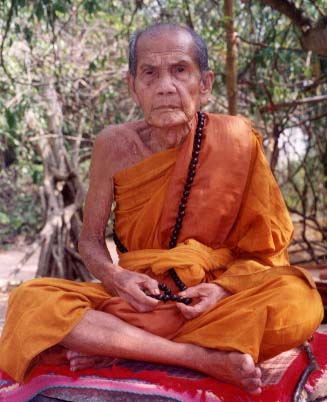 Luang Phu Hmuns amulets are still available to limited extent, but the Thai Amulet Scene is quickly getting wind of both the fact that his amulets are becoming very rare, and prices rising, and also starting to realize that there seems to be a secret inner circle who know about the attainments of this Monk, and that there are severe reasons to believe that he may have been an Arahant, which, if confirmed, would make his amulets soar in price. We believe that it wil not be too long until his story become more widespread and his amulets enter the annals of the Classics, becoming unreachable for the average Budget. If there was ever a time to gather his amulets, it is Now, and not Later.