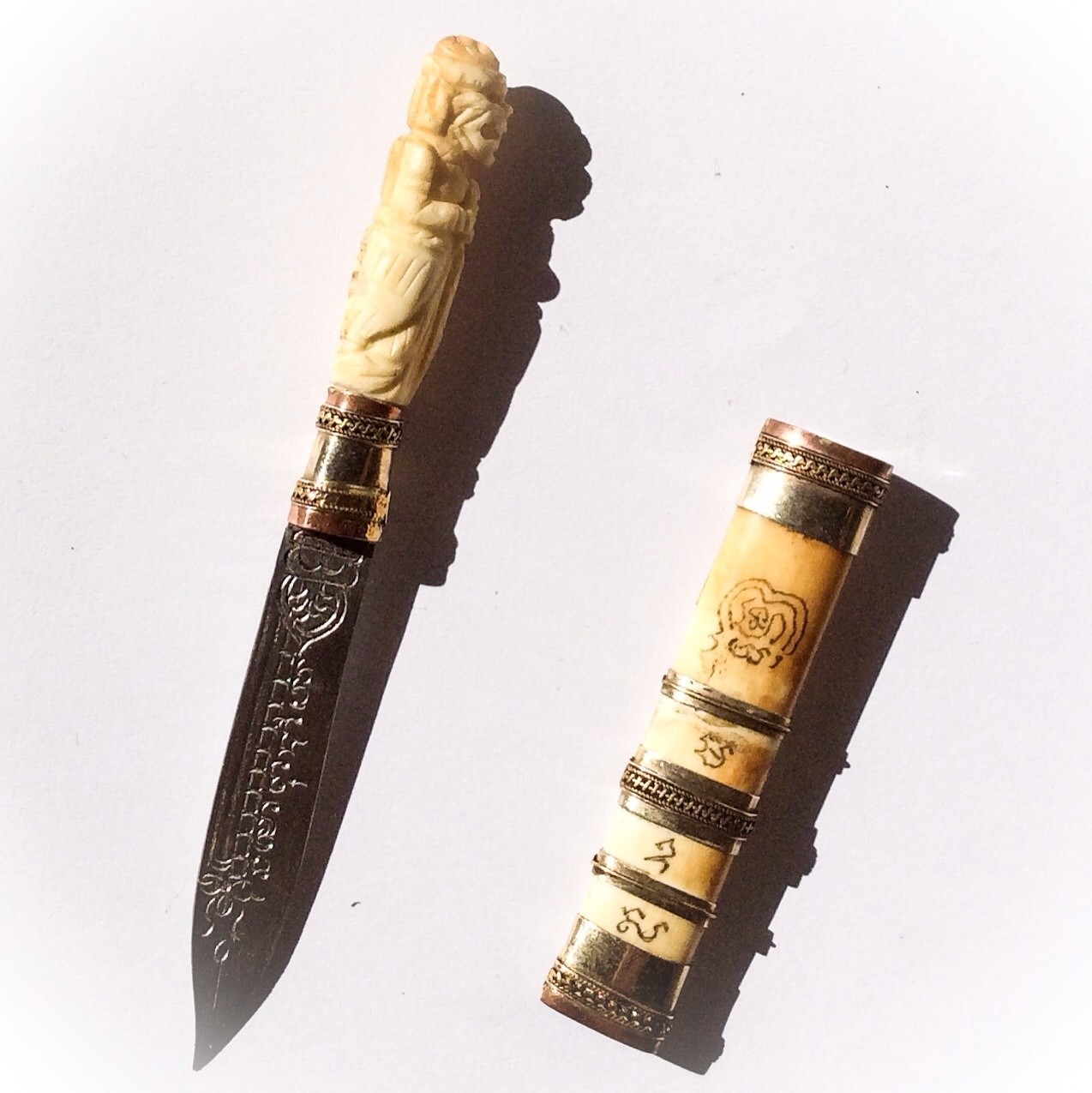 This sacred hand carved elephant bone spirit knife, with an image of the monkey god Hanuman carved into its handle, has been made and empowered by the great Luang Por Prohm of Wat Ban Suan, in Pattalung. This is one of small numbers of sacred ritual knives, made from bone, and also sacred wood. The Mitmor have been resting at the Asrom Por Taw Guwen awaiting a further empowerment held on the sixth of March 2557 BE, in Wai Kroo ceremony. Luang Por Prohm has previously empowered the Mitmor, after inscriptions being made by Laymaster Ajarn Plien (Wat Don Sala). This item will be available and placed in stock, as of 6 March 2557.

The knife measures five inches in the sheath. They were made with various carved bone, or wooden sheathes and handles, in different forms, including Hanuman, Por Gae Lersi,  Pra Pikanes (Ganesha), and Taw Waes Suwan Asura Deva.

The monkey God Hanuman is holding a sword-like club, known as a Krabi in Thai. Hanuman in this posture is also called 'Hanuman Jab Hlak', which means 'Hanuman holding a Pillar'. This brings stability and prosperity, as well as safety and security. The Wicha Hanuman Jab Hlak, is used to protect the heart of every city, as well as the homestead, and the nation. Hanuman can not be killed, and wins all struggles and challenges.

Hanuman, is apart from this also a Demon slayer, Who always gains advantage of his opponents and is the victor. His amorous exploits, are second to none, as a Casanova and seducer of the most beautiful maidens and nymphs. He has a very wily mind and good weights, which allow him to pierce through any trickery, and see what lies behind the intention. This protects you from being fooled are conned in business and also will protect you from those who mean you harm, for Hanuman, we'll see through any fault is pretences, and uncover the culprits for what they are guilty of.

As a protection against black magic and other forms of dark sorcery, the monkey faced god of Vedic Lore is also yet to meet his match, with the single exception of the Lersi Hermit God Naradha (Lersi Por Gae Narot). It is said that the only being who ever got the better of Sri Hanuman, that Hanuman had ever encountered, was one who had beaten him in magic and in mental trickery. Namely the hermit sage Naradha himself.

This occurred after Hanuman had let the Yaksa Totsagan (Ravana) set fire to his tail, as part of a trick to set the rooftops of the city of Langka aflame. But once he had finished, Hanuman could find no way to douse the fire on the tip of his tail, which the demon Totsagan had ignited with his magic.

Hanuman was then forced to beseech the Hermit Sage Naradha to help, by telling him the secret of how to douse the magical fire which left his tail ablaze with flames. Naradha then revealed the secret, which was to put the tail in his own mouth, and douse it with his spit.

Hanuman then lauded Naradha as the most powerful of all the Lersi, and of all Mages and Sages, declaring him the most wise. Hanuman is also the source of reverence of many members of the army, and other kinds of military associations. This is because of his loyalty to the god Rama in the story of the Ramayana. Loyalty, is one of the inherent qualities which are attributed to the God Hanuman.

Empowered with the sorcery of the Masters of the Southern Khao Or cave Temple, and the lineage of Pra Ajarn Kong (Wat Ban Suan). Inscribed by the laymaster Ajarn Plien, and blessed at Wat Ban Suan in Putta Pisek ceremony.