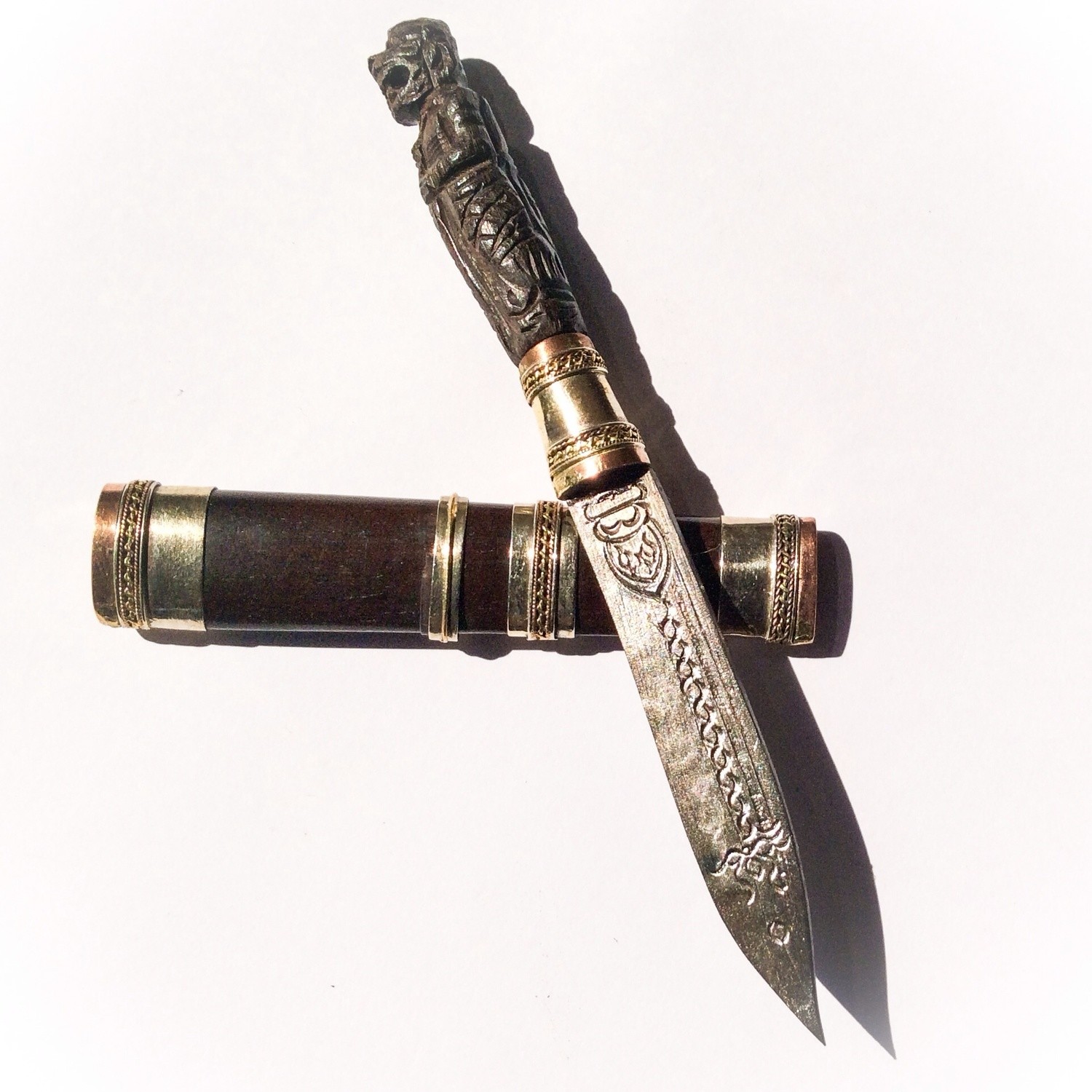 These sacred hand carved Mitmor, are made from sacred Makham tree wood (wild forest Tamarind). This edition of sacred ritual knives, were also released in other substances namely, bone, & a very few were also carved from a small amount of legally donated ivory, as special items for Thailand and permitted countries only.

The Mitmor Daam Hanuman spirit knife, is decorated with an image of the monkey god Hanuman carved into its handle, has been made and empowered by the great Luang Por Prohm of Wat Ban Suan, in Pattalung. This is one of a very small number of sacred ritual knives, made from bone, ivory, and sacred wood. The Mitmor have been resting at the Asrom Por Taw Guwen since January 2557 BE, awaiting a further second empowerment held on the sixth of March 2557 BE, in Wai Kroo ceremony.

Khao Or Master Sorceror and Abbot of Wat Ban Suan, Luang Por Prohm, has previously empowered the Mitmor in Puttisek at Wat Ban Suan, which came after initial inscriptions and empowerments were made by Laymaster Ajarn Plien (Wat Don Sala).

These ritual knives, hence, began their creation and trajectory, at the temple of Wat Don Sala. Then they travelled to the temple of Wat Ban Suan, for a full empowerment from a Thai Buddhist Guru master monk of high esteem, whereafter, they travelled to their final destination for empowerment at the Asrom Por Taw Guwen. Ajarn Spencer particularly requested an edition of mitmor for his Ashram, but that has been blessed by the Southern Khao Or Sorcerors, with authentic Magic of old from the direct lineages of Pra Ajarn Kong (Wat Ban Suan), and Ajarn Chum Chai Kiree.

This is because Ajarn Spencer does not intend to perform any direct empowerments through magickal sorcery, rather, he prefers to invoke only auspicious blessings of the Buddhas, and the Bodhisattvas as well as the Celestial Devas. There is not meant to be anything amazing, or overly special with the third empowerment, rather, to merely make prayers over them, and to imbue them with one's well wishing thoughts, thanks, and hopes for great blessings for those who receive them.

There are two kinds of miraculous power, the first perhaps being better known namely sorcery. The second kind is attained through faith, and auspicious heart and mind, Applied to one's deeds. We therefore hope that you can be said that these ritual knives have received both empowerments of sorcery, and also Buddhist blessings.

They were made with various carved bone, or wooden sheathes and handles, in different forms, including Hanuman, Por Gae Lersi, Pra Pikanes (Ganesha), and Taw Waes Suwan Asura Deva.

One should be aware of the difference in hand carving as far as detail is concerned, when comparing bone carvings with carved wooden objects. The wooden carvings will always have a slightly finer detail to their engraving, where as the bone, which is much harder and more difficult to engrave and carve, will have a slightly smoother appearance, with slightly less detail.

It is a matter of opinion, preference, and choice which one personally find to be more powerful, or attractive. It would be untrue to claim otherwise. One could add to this, would be the facts, that, is much rarer to find and more highly valued as a substance.

There is also less detailed as the finished work of art. Holy Tree Wood, is considered to be possessed by sacred Nature Spirit, much easier to find and more easy to carve into delicate forms. There is therefore something to speak for each particular substance and neither of them conquers the other and both of them have a downside, and an upside. This is the case with everything in life of course.

The monkey God Hanuman is holding a sword-like club, known as a Krabi in Thai. Hanuman in this posture is also called 'Hanuman Jab Hlak', which means 'Hanuman holding a Pillar'. This brings stability and prosperity, as well as safety and security. The Wicha Hanuman Jab Hlak, is used to protect the heart of every city, as well as the homestead, and the nation. Hanuman can not be killed, and wins all struggles and challenges.

Hanuman, is apart from this also a Demon slayer, Who always gains advantage of his opponents and is the victor. His amorous exploits, are second to none, as a Casanova and seducer of the most beautiful maidens and nymphs.

He has a very wily mind and good weights, which allow him to pierce through any trickery, and see what lies behind the intention. This protects you from being fooled are conned in business and also will protect you from those who mean you harm, for Hanuman, we'll see through any fault is pretences, and uncover the culprits for what they are guilty of.

As a protection against black magic and other forms of dark sorcery, the monkey faced god of Vedic Lore is also yet to meet his match, with the single exception of the Lersi Hermit God Naradha (Lersi Por Gae Narot). It is said that the only being who ever got the better of Sri Hanuman, that Hanuman had ever encountered, was one who had beaten him in magic and in mental trickery. Namely the hermit sage Naradha himself.

This occurred after Hanuman had let the Yaksa Totsagan (Ravana) set fire to his tail, as part of a trick to set the rooftops of the city of Langka aflame. But once he had finished, Hanuman could find no way to douse the fire on the tip of his tail, which the demon Totsagan had ignited with his magic.

Hanuman was then forced to beseech the Hermit Sage Naradha to help, by telling him the secret of how to douse the magical fire which left his tail ablaze with flames. Naradha then revealed the secret, which was to put the tail in his own mouth, and douse it with his spit.

Hanuman then lauded Naradha as the most powerful of all the Lersi, and of all Mages and Sages, declaring him the most wise. Hanuman is also the source of reverence of many members of the army, and other kinds of military associations. This is because of his loyalty to the god Rama in the story of the Ramayana. Loyalty, is one of the inherent qualities which are attributed to the God Hanuman.

Empowered with the sorcery of the Masters of the Southern Khao Or cave Temple, and the lineage of Pra Ajarn Kong (Wat Ban Suan). Inscribed by the laymaster Ajarn Plien, and blessed at Wat Ban Suan in Putta Pisek ceremony.

Mitmor can be utilized as a Protective Amulet, or as a Ritual/Ceremonial Instrument for various methods of Magical and Spiritual Practice, such as making Holy Water, Blessing Devotees, Exorcizing Ghosts and Demons, and Empowerment of Inanimate Objects.

Each individual ritual knife, is slightly different because of the nature of individual and carvings and/or inscriptions. Hence, the received item can differ slightly in appearance from the one seen in the photos, but, we guarantee that all are equal in quality and performance. You can choose either these wood, or you can also find the mitmor daam Hanuman with bone sheath and handle, assuming both are still available in the store.