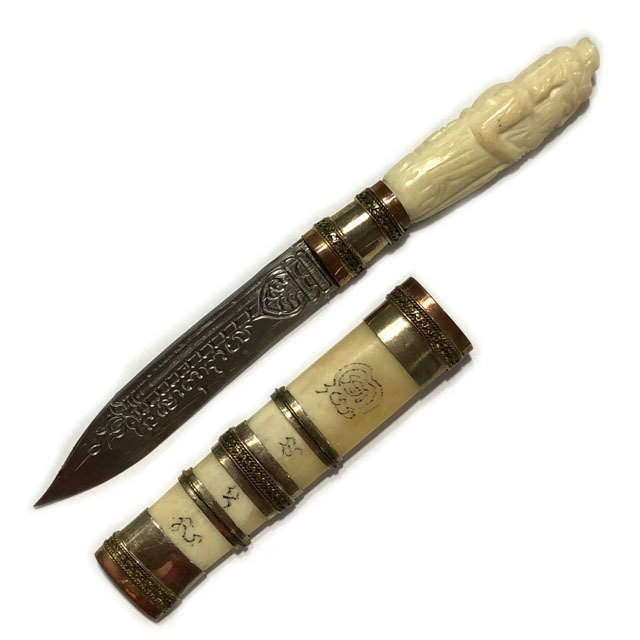 This sacred hand carved elephant bone spirit knife, with an image of the carved into its handle, has been made and empowered by the great Luang Por Prohm of Wat Ban Suan, in Pattalung.

This is one of small numbers of sacred ritual knives, made from bone, and also sacred wood. The Mitmor have been resting at the Asrom Por Taw Guwen awaiting a further empowerment held on the sixth of March 2557 BE, in Wai Kroo ceremony. You can see some videos documenting ajarn Spences ceremony at the bottom of this article

Luang Por Prohm has previously empowered the Mitmor, after inscriptions being made by Laymaster Ajarn Plien (Wat Don Sala). This item will be available and placed in stock, as of 6 March 2557.because the knives are made from bone, the colour of each bone is slightly different, and can range from medium brown Siena, right up to pure white.

The colour of the item can therefore not differ slightly from the colour tone of the item in the image. They are however all of 30 numbers of this series and is item is unique in itself for his difference in appearance. The quality of the carving and the empowerment that has been performed is identical with each ritual knife.

The knife measures five inches in the sheath. They were made with various carved bone, or wooden sheathes and handles, in different forms, including these Ganesha, Por Gae Lersi, , and Taw Waes Suwan Asura Deva.

The amulets were given final empowerments at Asrom Por Taw Guwen, before release on 6th march 2557 BE Wai Kroo ceremony. Only a handful or two were made in all.