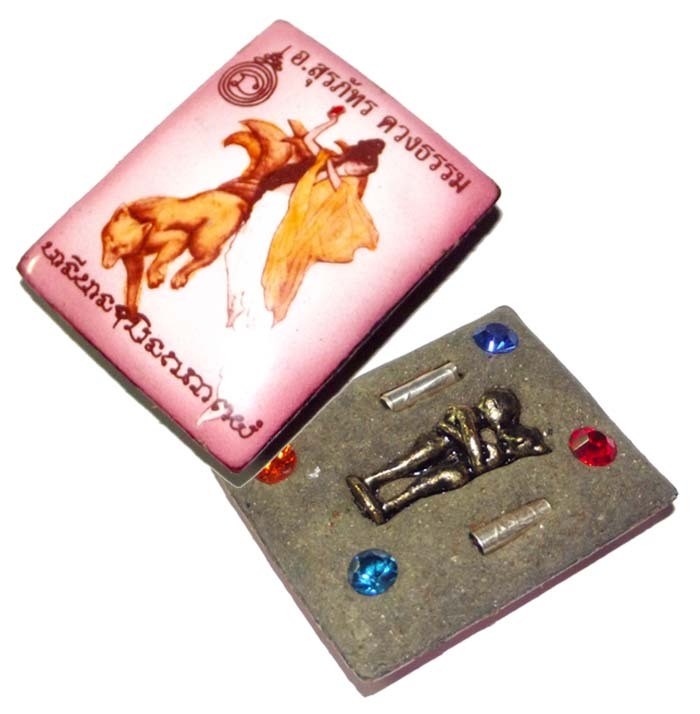 Nine Tails Fox Prai Deva Locket, in masterpiece limited series Ongk Kroo, by Lay Master Ajarn Surapat, filled with extremely concentrated Necromantic Prai Powders, and Magical Elements, Reanimated with the Wicha Jing Jork Gao Hang, and Wicha Maha Pokasap, Maha Sanaeh, and the Wicha In Koo. This Pim B was released along with the extremy rare (due to low numbers and fast depletion) Pim A Ongk Kroo masterpiece version with 9 silver Takrut and 6 Plo Sek Enchanted Gemstones. The amulet is Filled with the most Powerrful maha Sanaeh Prai Powders that Ajarn Surapat could Muster up, and empowered with an In Koo Deva statuette insert, two Takrut Maha Sanaeh, and Four 'Ploi sek' (Enchanted Gems) to bring Maha Pokasap Wealthy treasures Magic into Range, and haul in Treasures.

The rear face also has two Silver Takrut Maha Sanaeh using Sariga Charm magic to Increase the Power of Enchantment when Speaking, and to induce Metta and Attraction in the Hearts of those who approach, and the IN Koo Deva of Love Binding Spell in the form of a statuette with embracing lovers (In Koo Plord Rak) 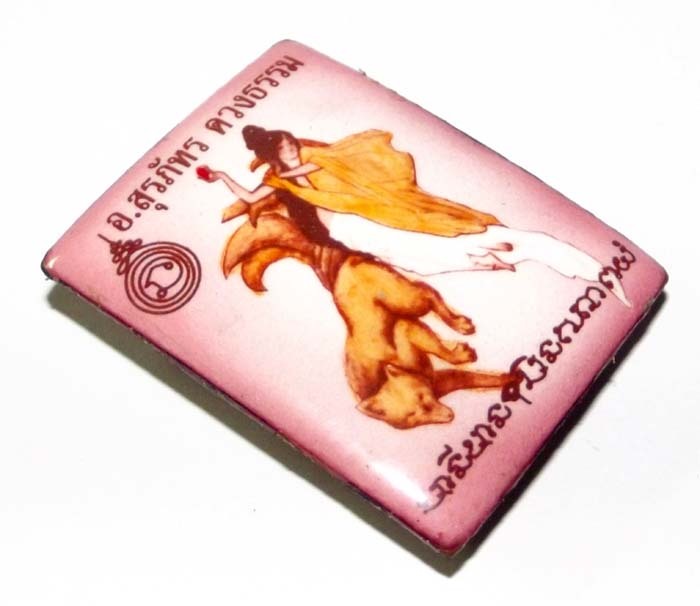 The front face features the Demon Enchantress in Human Form, along with the Nine Tailed Fox Animal Form. One Loi Ongk statuette of an In Koo Deva Lovers (Yintong) in Sacred Chanuan Metals, is inserted into the Sacred Muan Sarn substance. The In Koo or, 'Yintong'. The word 'Yintong', is a Popular name used outside of Thailand, but not actually used here, it is a Misheard interpretation of the 'In Tong' (Golden In Koo), which was the name given to an edition which hit foreign shores many years ago, and was adopted as a common nickname for the In Koo. 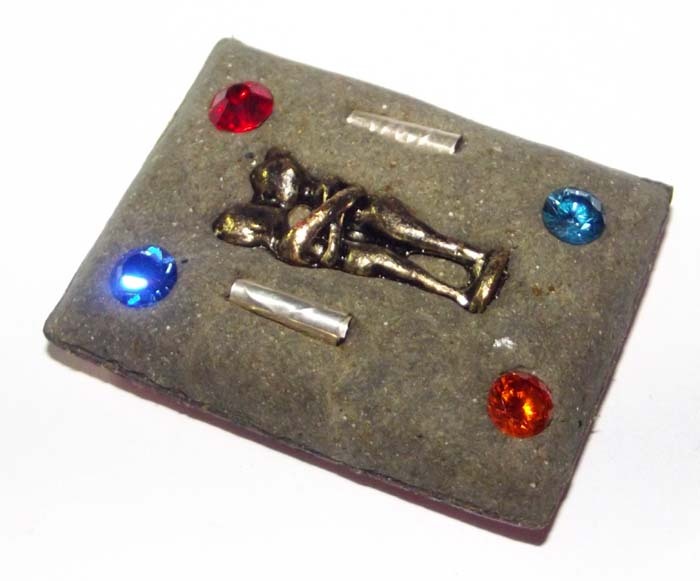 An excellent Necromantic Charm for Seductive Exploits, Gambling and Business Speculation, the Nine Tailed Fox is a Legendary Demon, known in Indian, Koran, Chinese, Thai and Japanese Spiritual Cosmology, legend and Myths. The nine-tailed fox (Chinese and Japanese: 九尾狐; pinyin: Jiǔwěihú; Korean: 구미호) is a mythological creature species that was depicted in the Nanshan jing, Haiwaidong jing and Dahuangdong jing of Shan Hai Jing as having the voice of a human infant. It can be eaten by humans, and those who eat it can be protected from evil.

Later in history books like Book of Zhou and story collections like Extensive Records of the Taiping Era, the nine-tailed fox was depicted as a beast of fortune. Sent by the heavens, the nine-tailed fox was seen as a sign of fortune, peace and luck. In the Han dynasty, it is the protector of royal blood. The Nine Tailed Fox is able to enter and possess others, and is able to change its shape and form, a Master of Illusion. Its ability to attract the other sex and seduce them into the bed has gained Legendary status in all Cultures where stories of its existence have arisen. 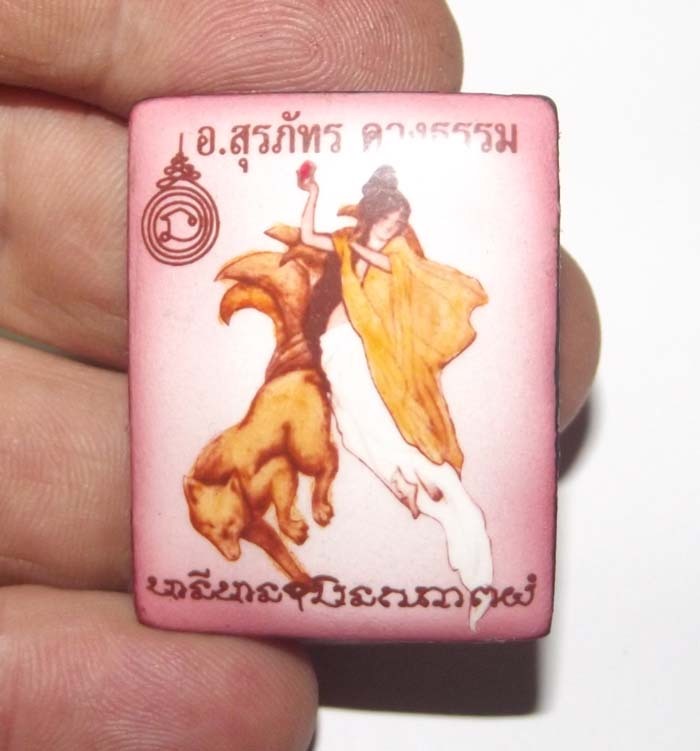 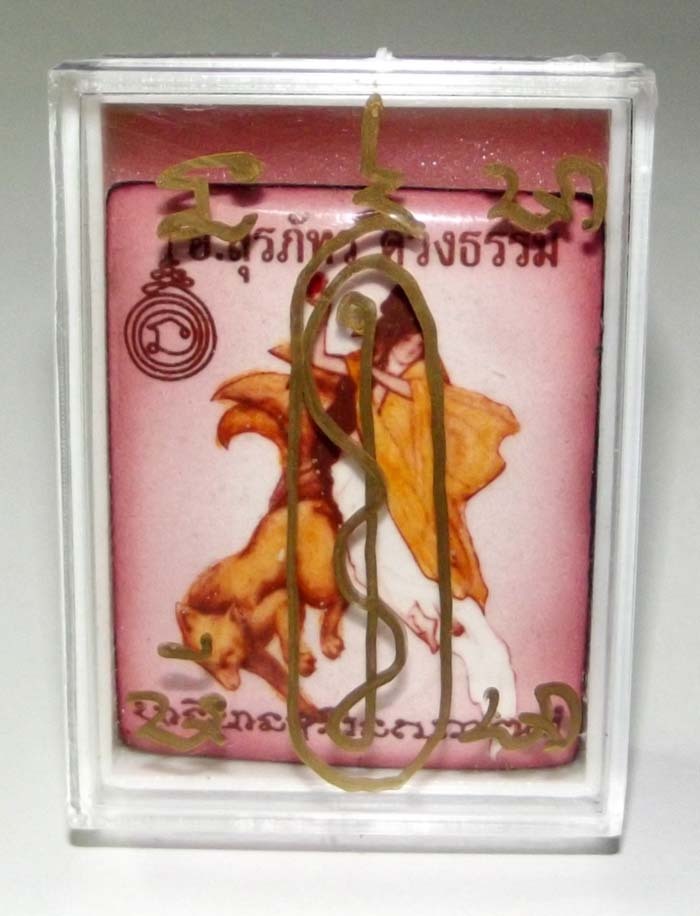 As a final touch, Ajarn Surapat has given each amulet box a blessing with hand inscription of Sacred Yant, and Kata Khom.

Please read the information on the below link to deepen your understanding and knowledge of how to use this amulet;

Who is the Nine Tails Fox? How to Worship her?