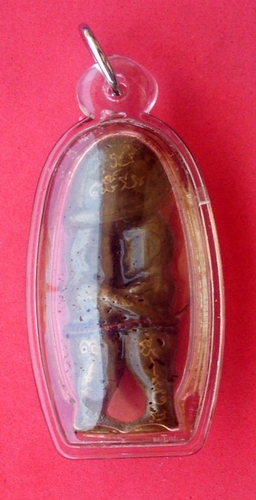 The famous Master of the Sariga Pak Dee amulet, 'Luang Phu Naen Kampiro' of Wat Ban Gaset Sethee in Roi Et, has come up with another powerful spell in the form of the Palad Khik talisman, empowered with the spirit of the In Koo Deities of Parity.

What is the In Koo?

The in Koo is a symbiotic Deity in the form of a Man and a Woman embracing each other. It is a magical animist effigy which ancient people believed represents the first ever pair of Man and Woman (male and female) in the History of the World, and is a symbol of Love between a man and woman. It is believed that the holder of an In Koo Talisman is endowed with power over the other sex, and that they will feel attracted to the wearer of the In Koo, and wish to approach and get to know you. If they approach then they will be helpless against the attraction power of the Palad In Koo.

If the In Koo is kept in the House, then all the family and people in the household will love each other and be happy together. If it is worn as an amulet or carried on ones person, then it will cause everyone the wearer meets to feel friendly and compassionate towards them, and even make others fall in love with the wearer if Bucha is made to the In Koo, and this request is asked for in exchange for Bucha. Business will flourish, money and gifts will flow in, good fortune will come, and life without disturbances. The In Koo is a sacred Love and Metta Talisman which has been used by ancient folk for thousands of years, and shows no sign of disappearing soon, for its popularity is still as evident as it ever was.

Palad Khig is an amulet derived from ancient 500 year old (at least) Brahman Wicha of the Shiva Lingam, and is a charm to attract business, money, and the opposite sex

Palad In Koo is both a Palad Khig, and an In Koo Talisman, which endows this amulet with increased force and attraction.

Luang Phu Naen has created a new form of In Koo with this Palad Khik talisman which is full of various empowerment methods, be it the mix of Palad Khik and In Koo, or be it the soaking in Prai Oil to increase the potency of the magic. His mixture of the In Koo Animist Deity and the 5000 year old Shiva Lingam (Palad Khik), which is the primordial male energy force. He then increased the power of thye spell by using sen dai jet see (seven colored silk thread - a Wicha used to bind the hearts of one person to another. This increases the binding force between a Man and a Woman (or vice versa, for this amulet can be used by either sex). In addition, Luang Phu had the Palad immediately encased in waterproof sealed acrylic, so that he could add his special Herbal Metta Oil (Nam Man Wan Maha sanaeh 108), for even more attraction power. The amulets are thus soaked in Nam Man Wan made from Khun Phaen Oil, Wan Saw Hlong, Wan sanaeh Jantr, Wan Nang Lom, Wan Sanehaa, Wan Maha Sanaeh, Kruea Khao Hlong, Wan Gai Fa Paya Lor, Wan Sariga Lin Tong, and other attraction plants (up to 108). The oil aso has 'Hua Chuea Nam Man Prai' (the rich residue from the top of Prai Oil bottle) made by Luang Phu Naen.

This combination of respecting the ancient methods of amulet creation, ingredients (and how to collect them) as well as remaining faithful to Historical Artistic Buddhist tradition by implementing finely honed craftsm,anship and tasteful design of the amulet to allow this sacred Palad In Koo to be both a new innovation and advancement in Magical tradition, as well as keeping tradition with lineage, which will make this amulet just as artistically and religiously valuable in future years as are many of the older classics of Thai amulet history. this is the way to go as far as the new amulet movement is concerned, developing as even ancient tradtions such as Thai Buddha Magic must, for time tarries forwards, and even the ancient spells we know from History, were once new innovations in their time.

Remember, if you believe in Magic, then we can say that the charms can help us, but only if we also make an effort to allow the amulets to help; If we take an amulet for finding a Job, then we should not sit at home and not look at all, believing the amulet will do all thr work by itself - we have to go out and seek work for the amulet to help. In the same way, with love charms, we must not think that we can be impolite or disagreeable towards others and still hope that the amulet will make everyone love us. This would be silly to believe. Magic and the Deities can help us, but we must always help ourself first in order to let others help us too.