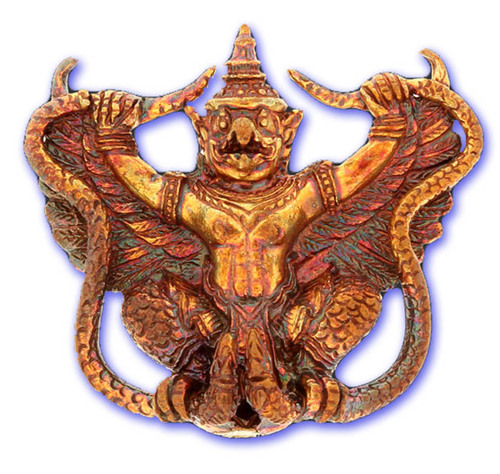 The Garuda has Great Might and Commanding Power, and symbolizes Development, Advancement and Prosperity. Garuda increases Your Status and Influential Powers. He is the Lord of all birds, and is the Sacred Vehicle of Transport for Pra Narai (Vishnu Deva).

Garuda is blessed with In vincibility and Immortality, no weapon in the Universe can Destroy him. Even the Lightning Bolts of Indra. Garuda has very quick Intelligence and Wisdom, but is not arrogant and respects others. He is an Honorable Deva, worthy of admiration. Garuda is most well known for affecting the development and advancement of success and professional status and increase income and wealth. Civil Servants, Police, Military or other Officals should carry and worship Garuda, as well as those who protect their nation or its Leaders. 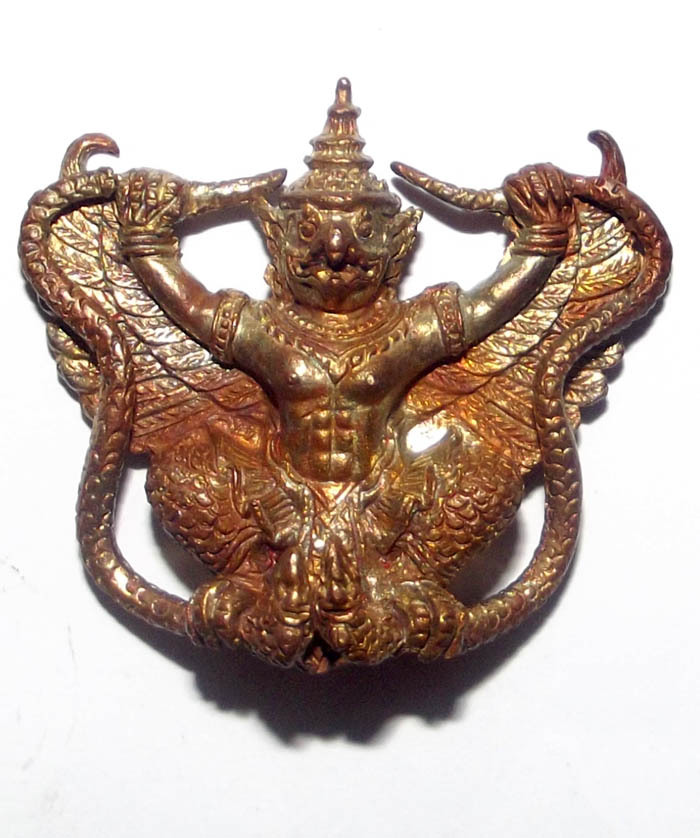 The amulet is made from a very high quality mix of nine sacred metals, called 'Nava Loha Gae Ngern-Tong. 'Ga Ngern Tong'; means 'rich in gold and silver' which is a perfect explanation of what this Sacred Metal Alloy is; 9 metals with a larger helping of gold and silver than usual Nava Loha. Gold is added for lustre and sheen, and silver is added for hardness, not only because of the high value.

The Garuda will destroy any enemies and place things in their way to make it impossible for their attacks to approach. The Garuda is also able to induce promotion of Status and Power. Garuda is thus a 'Serm Yot' (increase Status) and 'Pokasap' (teasures and wealth) Amulet. 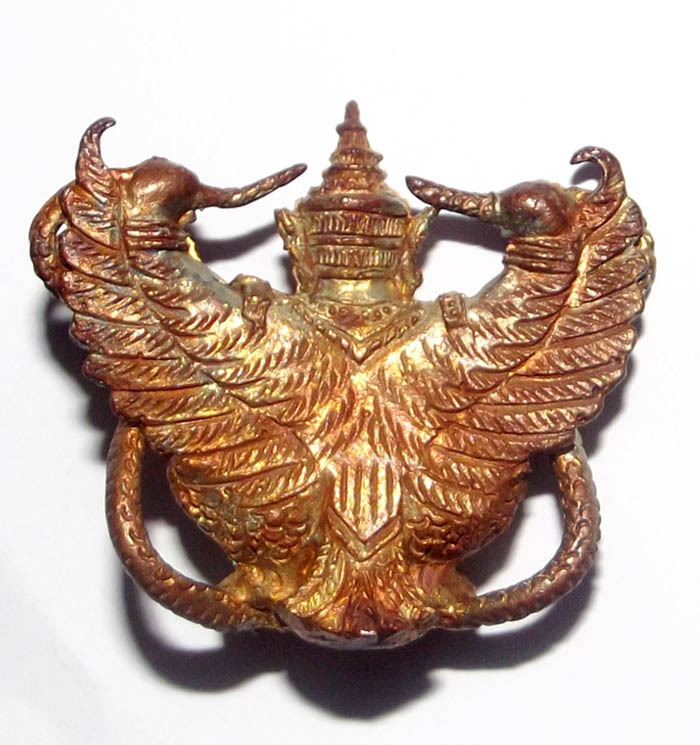 Luang Phu Phad performed solo empowerments over the Garuda Amulets over a long period of time before the final Puttapisek Blessing. The amulets were then given a final Blessing by Luang Por Phad in Puttapisek Ceremony on the Sao Ha Lunar Saturday of the 2554 'Piti Sao Ha' edition amulets. 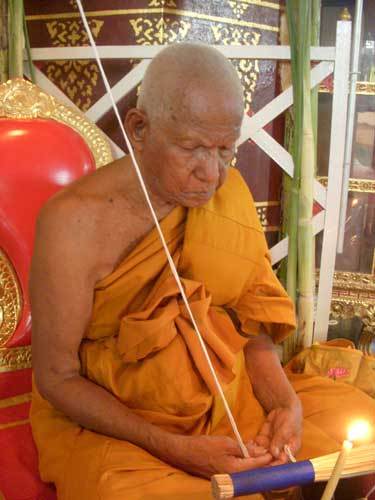 Luang Por Phad is known for his Kindness and Generosity and his Diligent Practice. He is widely known to have Puttakun Powers that improve the life of those who Bucha his amulets, this is something that Thai Devotees of Luang Por Phad are most certain of. 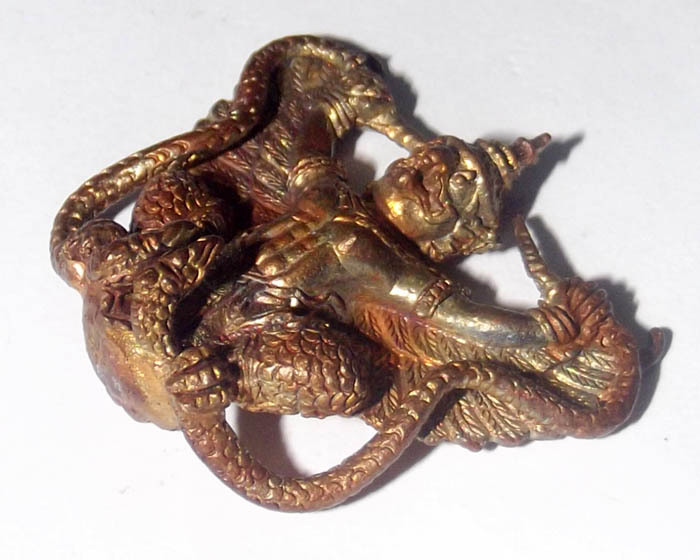 The base of the amulet has a 'dork jan' and a Khom letter 'Ma' embossed as authenticity code marks.

This particular edition of Garuda is recommended to those who have a shop or place of business that is in a bad location, or unlucky corner, or those who cant get money to flow in at all. Place the Garuda in your store, or home, and see how things improve. 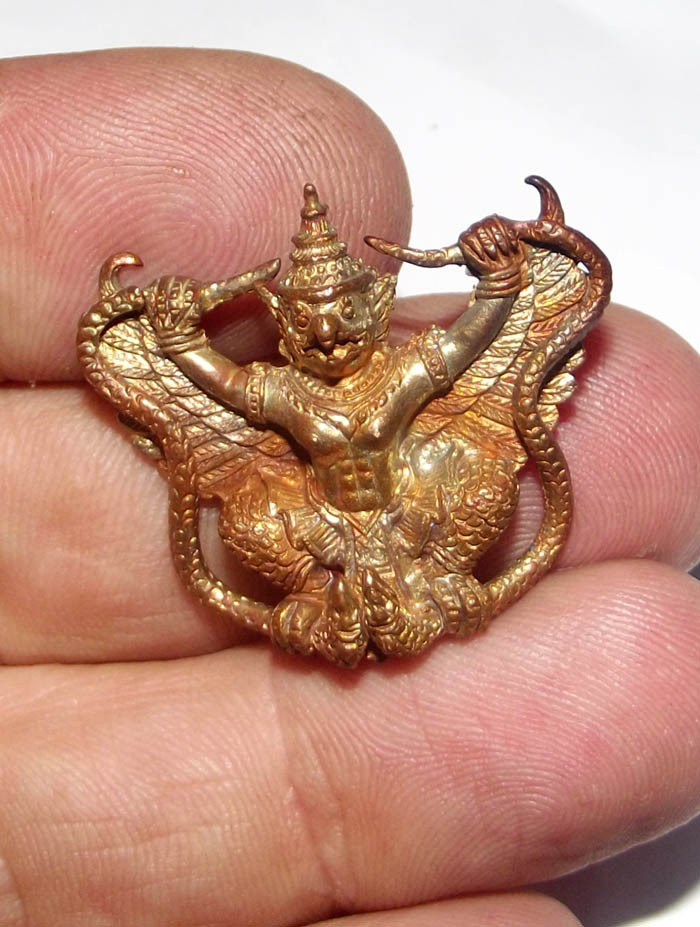 The Garuda is excellent protection agains ghosts and wicked spirits. Garuda eats Sambhavesi (a kind of phantom) as food and nourishment. In the Vedic Legends, Garuda is said to have ojne day found hardly any food, and so went off trying to catch Naga serpents, but Pra Narai (Vishnu) was afraid there would be trouble, because the Nagas reside under the Rule of Anandha Nakarach, the Naga King, a very powerful God. So Vishnu gave Garuda the permission to eat any Sambhavesi that were bothering the Human race, as his food. 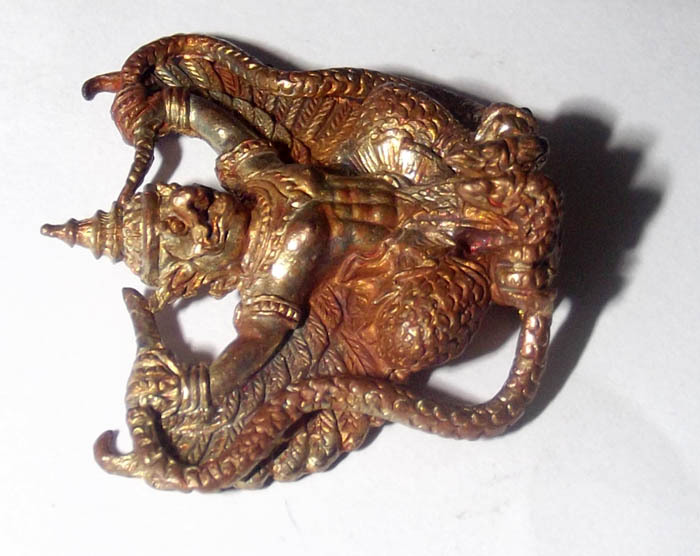 The Garuda is also empowered to hunt down and banish any obstacles or negative energies within, opening up channels for success and happiness. Anyone aiming to take advantage will be prevented from completing their task.

People born in the year of the rat, buffalo, horse, goat or monkey should also Bucha Paya Krut (Garuda)

Mp3 Sound Tutorial file for the above Kata is available for download instantly after purchase from the files tab within your Customer Account. 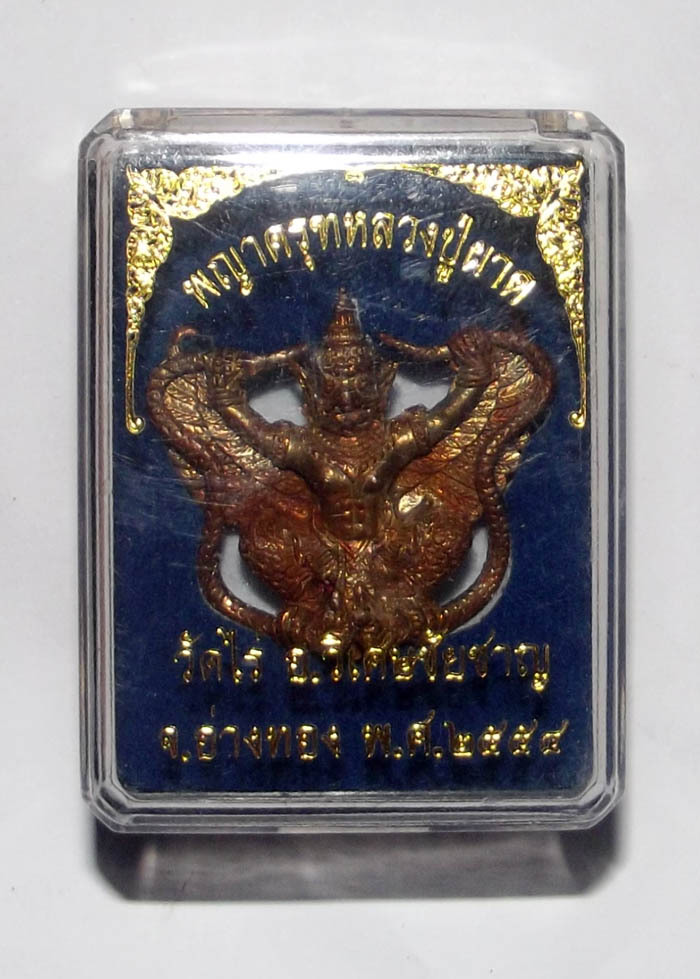 Comes with original box from the Temple - can be encased if wished.