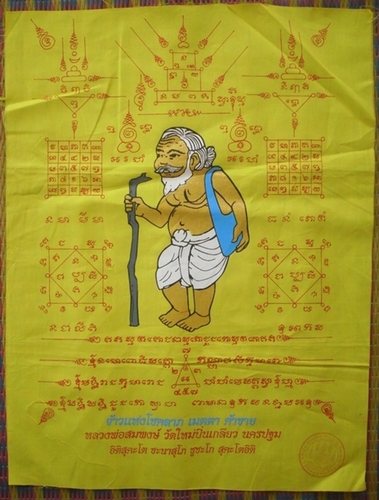 Pha Yant for carrying in the pocket, placing on the wall or framed on your Bucha altar, or on the wall in the place of Business. Pha Yant Choo Chok is a wealth attractor for both Businessmen, Merchants and especially good for travelling salesmen. The Yant has very many Buddhist Connotations, due to Choo Chok appearing in the Jatakas in the last incarnation of the Buddha before he was born as Siddhatta - he was previously born as the Prince Vessantara, and completed the Perfection of Giving. Choo Chok played a leading role in Prince Vessantaras completion of the perfection, by asking the Prince for his children, to which Vessantara conceded, and let go of his ultimate possessions and attained the 'Maha Dhana Baramee' (Perfection of Giving).

The fact that Choo Chok was able to even ask for somebody's children and  get them, shows the immense attraction and power of Metta mahaniyom which the beggar Choo Chok possesses. This is the reson why the Choo Chok Deity is suh a powerful attractor of riches, because Choo Chok has a special Baramee that allows even the least likely gifts to be given with the greatest of ease. Sales are made so easily with Choo Chok to help.