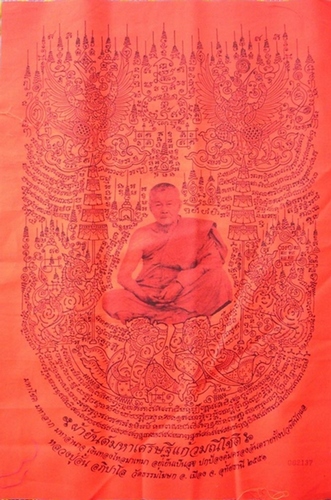 The Pha Yant features an image of Guru Master Luang Por An, two Vanora Himapant monkeys, two Ratchasri Himapant lions, and two Garuda birds. Made in 2551 BE, the Pha Yant are designed and empowered with various Himapant animal Deities to cover all major aspects of different possible blessings which a Human being may need;Maha Choke (luck) Maha Lap (great fortune in money matters), Maha Amnaj  for great power and command (this comes from the Garuda bird Deities), and Pongan Pay Andtaray Phuudt Bpisat (protect from physical and magical dangers).

We apologise for the glaring red glow on the Pha Yant which prevented us from making a clear foto. The color of the Yant is in fact a deep red color and the countours of the Yantra are dark black and clearly defined and visible, which is not apparent in the photo unfortunately.

Luang Por An Apibalo, Wat Tamma Kosok (Wat Rong Koh) Utay Thani, is a top Gaeji Ajarn Guru Master Monk who is a local of Utay Thani. He is lovingly known as "Pra Jee Gong' or 'Luang Por An Taewada', or 'Taewada Dta Tip'. He used to be a Police officer, who once worked together with the famous Rang Song Brahman Master of Jatukam Ramathep fame 'Khun Pantaraks Rachadej', who was also a Police Officer who hunted down the most wanted Outlaws.

He spent his last years as a Layman wroking on the team with Khun Pantaraks Rachadej chasing down the Countries most elusive and dangerous outlaws, until becoming bored with the ways of the World, and Ordaining as a Bhikkhu in the Buddha Sasana.

Luang Por An is an Adept of the Wicha of  all four elemental Kasinas (Din = earth - nam = water - Fai = fire - Lom = air). He learned the Wicha in the lineage of Luang Phu Sukh of Wat Pak Klong Makam Tao. LP An also once practiced in the North, and was the assistant and caretaker of Kroo Ba Srivichais Kuti. He spent a long time of his youth following Kroo ba Srivichai on Tudong forest wandering through the Northern regions of Thailand.

He inherited the Wicha of Pirun Gambang and Taep Ramjuan from the Luang Phu Sukh lineage Master in control of the passing on of the Wicha; 'Tan Jao Khun Put' (Pra Racha Utay Gwee), of Chiang Mai. He also increased his magical prowess with many other Wicha from other Master Lineages, such as Kroo Ba Srivichai, Luang Por Derm (Wat Nong Po), Luang Por Janta, Luang Phu Ploy (Wat Huay Kha Nang), who was incredibly skilled in the use of elements, minerals and crystals, and powerful Tagrud, Luang Por Kane (Wat Dong Sethee) who was adept in Wichas for Metta Mahaniyom, and amulets of the 'Jakkapat' variety (i.e. Tagrud Jakkapat Narai), Luang Phu Klueab, Wat Hnong Gradee, Luang Por Poon (Wat Nong Ta Ngu), who was amazingly empowered with great knowledge of the use of rare herbs to cure illnesses miraculously. Luang Por An is also a close friend of Luang Por Dtee, ex abbot of Wat Luang, the creator of the Suea Akom Sayob Look Pern Wicha (Tiger magic for invincibility against guns), which is famous all over Thailand.

Luang Por An is very diligent and strict with his own practice of the Buddha sasana as an ordained Bhikkhu, and has much Metta, Compassion and Loving Kindness. He is accepted as a True Master by all factions, be it his Thai or International devotees, those who collect and Bucha his amulets, and even the 'Wongarn Nak Niyom' collectors of fine antique amulets accept this Master as a true continuation of a genuine and ancient lineage of authentic practitioners with real Wicha.

He is currently the Abbot of Wat Tamma Kosok (Wat Rong Koh) in Utay Thani.

Read the Biography of Luang Por An >>>