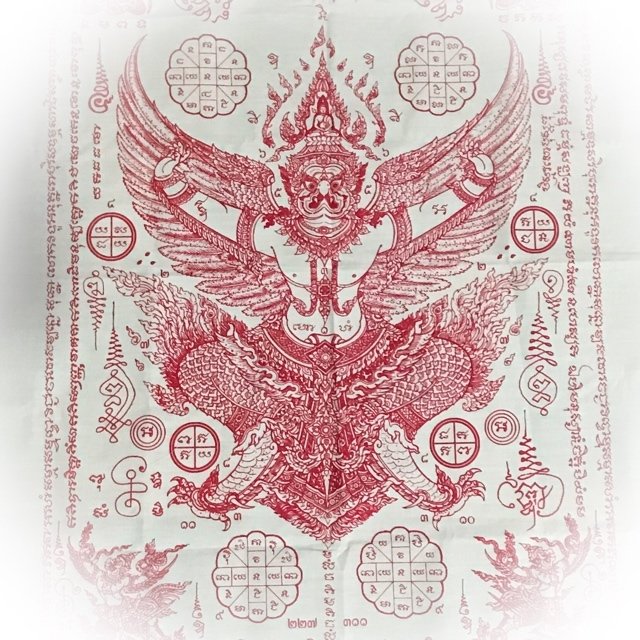 Giant Size Pha Yant with Pay Suban garuda and a plethora of Sacred Yantra and Spell Inscriptions, measuring 40 x 25 Inches, and intended for Wall Hanging in your shrine.. This giant size Pha Yant was released for the 70th Birthday of Luang Por Glom of Wat Koke Tong (Wat Koke U-Tong).

Luang Por Glom is the Abbot of Wat Koke U-Tong since the passing of the previous master Luang Por Solos, who was in his own right a very famous and powerful Master, whose amulets have been highly valued for decades in both the National and International amulet scenes. 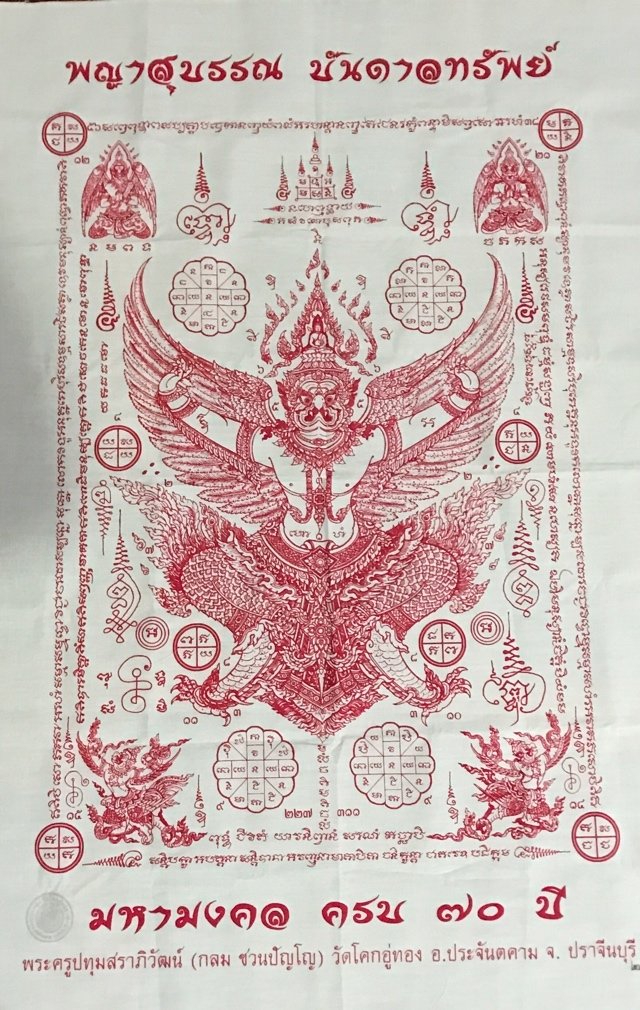 The Pha Yant dedicates the 70th year of life of Pra Kroo Patum Sarapiwat (LP Glom Chuan Banyo), the current abbot of Wat Koke U-Tong and the Wicha inheritor of Magical Sorcery of the great (and world famous) Luang Por Solos, the previous abbot. The central area is covered by the figure of Paya Krut Garuda with wings and legs outstretched in full flight with all his regalia. Above the Garuda, are two Garuda Bird Deities in attendance as watchmen the left one with the Kata 'NA MA PA TA' under it and the right side one has 'JA PA GA SA' inscribed, which are both incantations for the summoning and invocation of the 4 elements, used in summoning spirits or devas to inhabit inanimate objects such as this Pha Yant. The two Guardian birds are flanked on the inner side with a symmetry of 2 Yant Putto flanking the Yant Kroo in the upper central area (Yant Ha Yord).The head of the crown of the Garuda has an image of the Buddha seated upon a lotus throne with Granok Flamed aura surrounding him. Either side of the Buddha are two Yant Duang with highly complex encoded syllables which contain a plethora of incantations depending on which way the reading of the syllables are encoded. 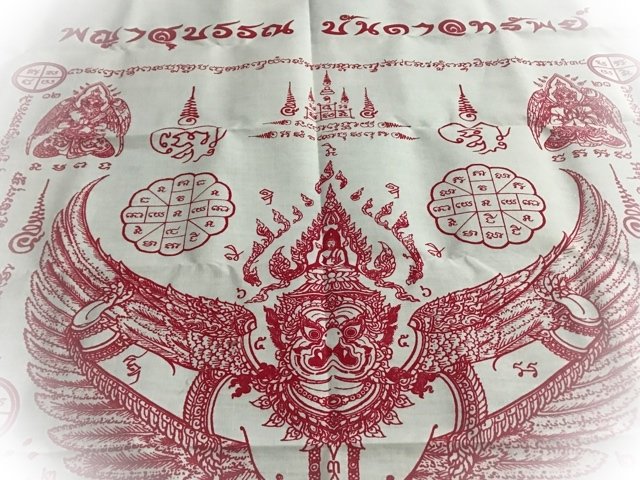 The tips of the wings are flanked by symmetrical Sacred Na Gao which is a magical numerology spell using the number nine with the Unalome. Around the Buddha crown and within the arms and torso of the Garuda are magical syllables inscribed in Khom Agkhara Lettering, and Numerology spells using the number 6 and 5. 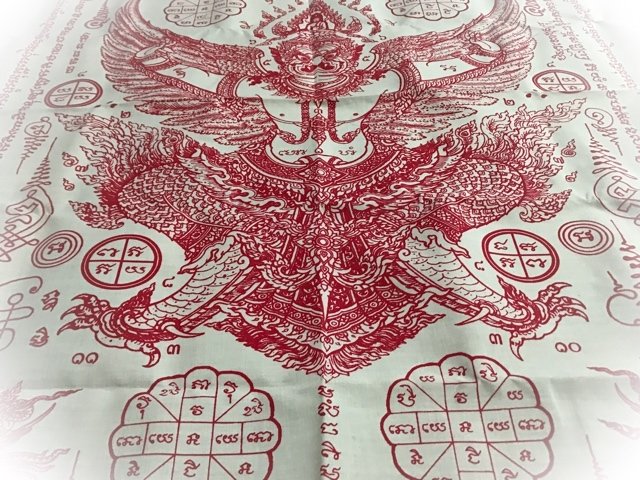 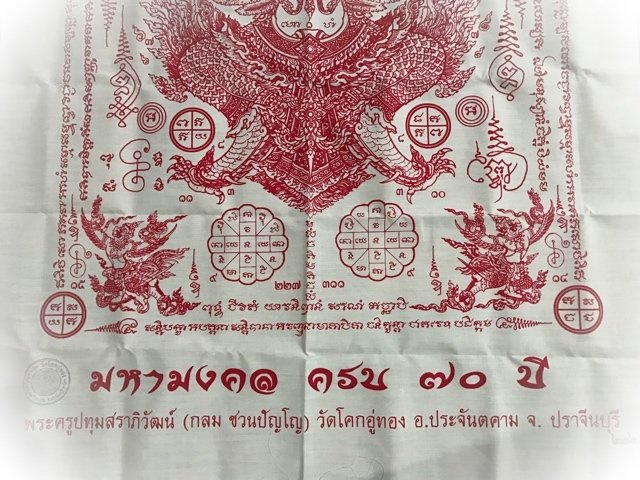 Two flying Garuda Deities flank the bottom corners of the Pha yant with two sound Yant Duang. Below the Yant is the ink stamp of the temple and the words 'Maha Mongkol Krob 70 Pi' meaning 'Great Blessings on the 70th Birthday'. Below that is the name of Pra Kroo Pathum sarapiwat Luang Por Glom Chuan Banyo of Wat Koke U-Tong, in Prajinburi. Below you can see the ink seal of the temple in closeup. 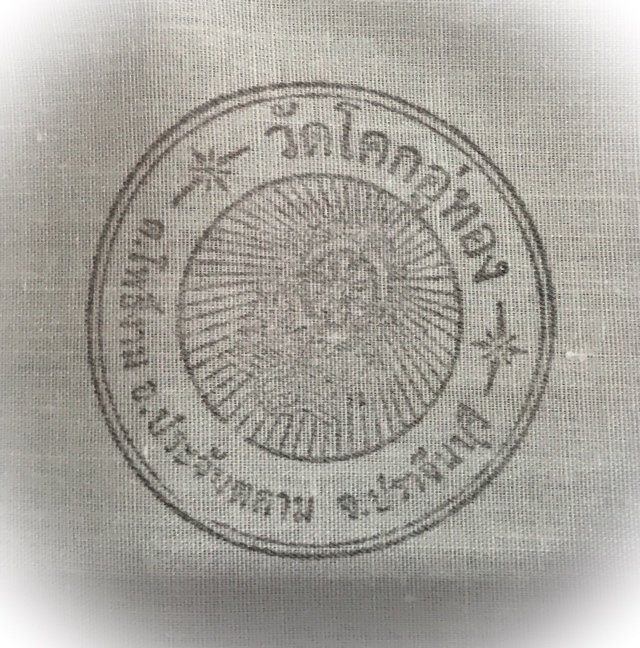 The Garuda has Great Might and Commanding Power, and symbolizes Development, Advancement and Prosperity. Garuda increases Your Status and Influential Powers. He is the Lord of all birds, and is the Sacred Vehicle of Transport for Pra Narai (Vishnu Deva). Garuda is blessed with Invincibility and Immortality, no weapon in the Universe can Destroy him.

Below; each Pha Yant has its own specific limited edition series number stamped on the cloth 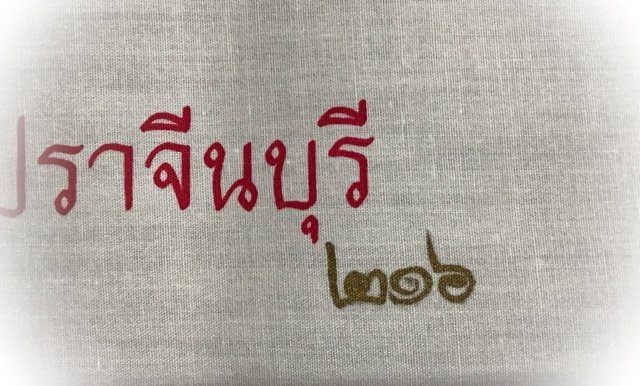 Even the Lightning Bolts of Indra. Garuda has very quick Intelligence and Wisdom, but is not arrogant and respects others. He is an Honorable Deva, worthy of admiration. Garuda is most well known for affecting the development and advancement of success and professional status and increase income and wealth. Civil Servants, Police, Military or other Officals should carry and worship Garuda, as well as those who protect their nation or its Leaders. 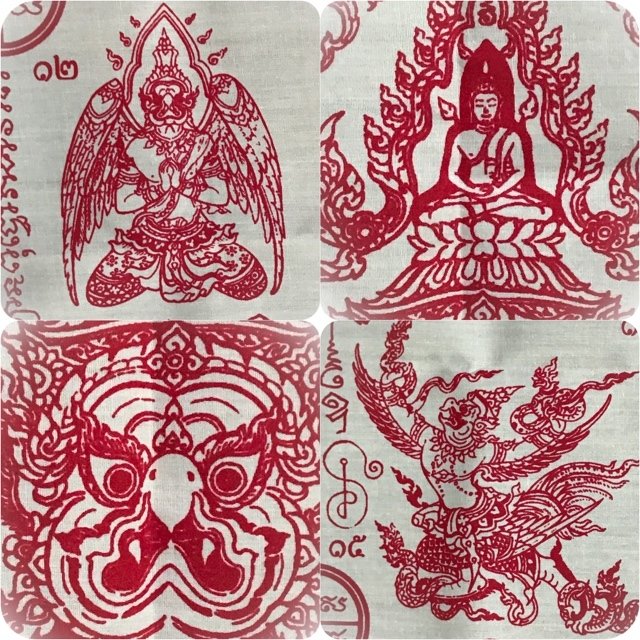 The Garuda is excellent protection against ghosts and wicked spirits. Garuda eats Sambhavesi (a kind of phantom) as food and nourishment. In the Vedic Legends, Garuda is said to have one day found hardly any food, and so went off trying to catch Naga serpents, but Pra Narai (Vishnu) was afraid there would be trouble, because the Nagas reside under the Rule of Anandha Nakarach, the Naga King, a very powerful God. So Vishnu gave Garuda the permission to eat any Sambhavesi that were bothering the Human race, as his food. The Garuda is also empowered to hunt down and banish any obstacles or negative energies within, opening up channels for success and happiness. Anyone aiming to take advantage will be prevented from completing their task. 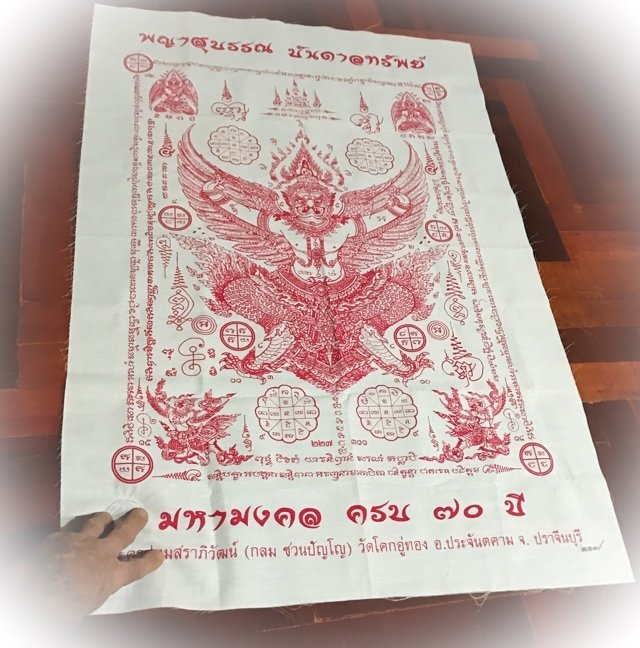 All Kata for Paya Krut (Garuda)