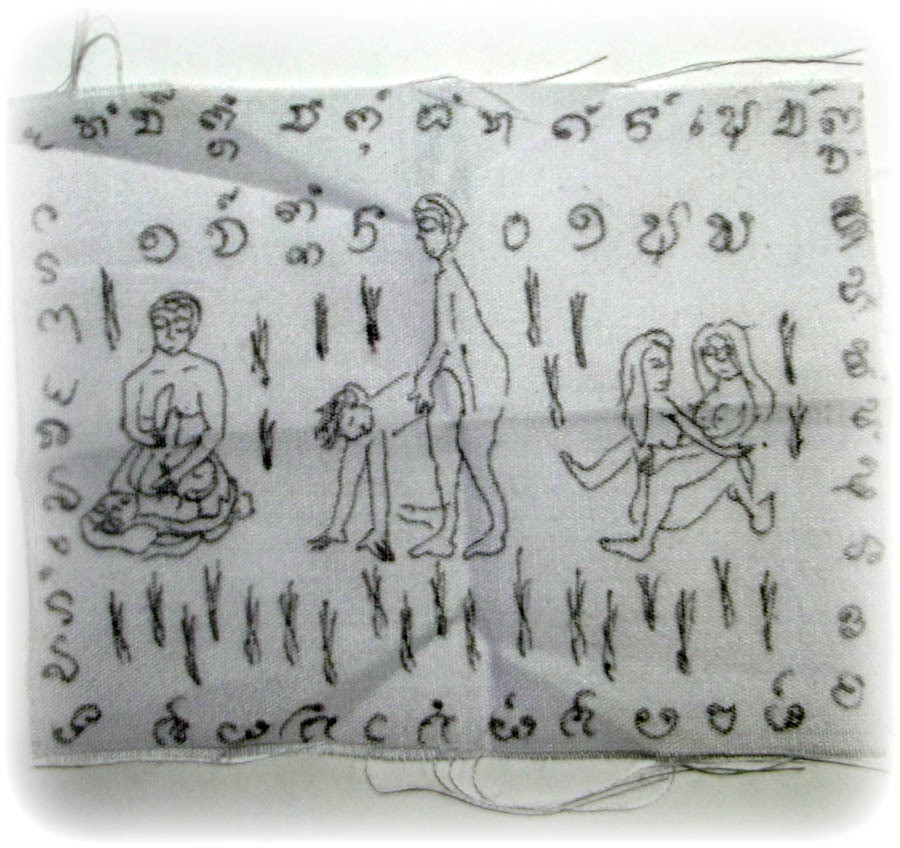 The focal point of the Muan Sarn (cloth) used for this Pha Yant is the fact that it is made from a piece of bedsheet that belonged to a famous owner of a perfumed garden, who would regularly seduce ladies and take his lovers into the garden to have his way with them. It is said he was so good at his favorite pastime, that all ladies would be completely satisfied and fall asleep on the spot afterwards.This item has free shipping.

The owner of the perfumed flower garden would use the bedcloth to lay on the floor to have his many different sexual antics with his lovers and mistresses and casual flirts. He was an extremely highly geared Lover, with a constant desire for sex. He would seduce all women from young girls, widows, married women.

Carry the Pha Yant in your pocket (wear to the front to seduce people, to the right to melt their anger). You can use it to wipe your face with like a handkerchief too before leaving the house, to invoke the magic onto yourself, to make people fall in love with your face. 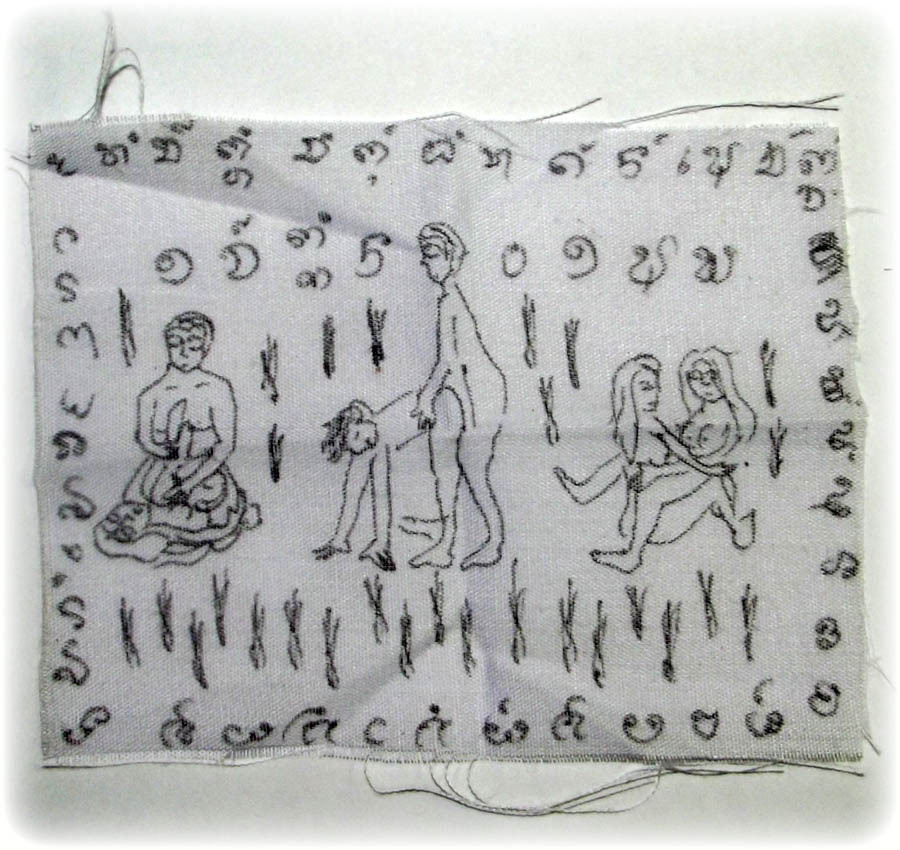 If you wish to empower the Pha yant even more, take the 'white blood' (secretions' of the lady and yourself, which will make it into a Love Charm to bind the particular lover to you as a partner in life.

"The Pha Yant is classed as 'Dark Arts', because it does not require the third Buddhist Precept (kamesu Mijchajara Weramani Sikhapatan Samadhiyami - I will not perform adulterous or promiscuous behaviour). 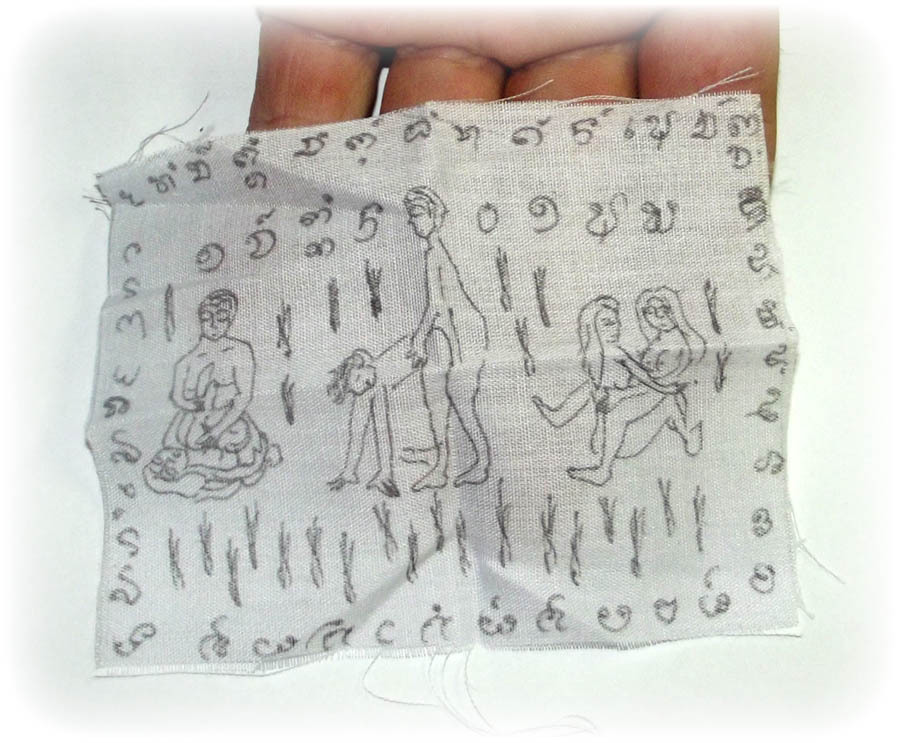 Can be worn in the pocket, but can be rolled and placed inside a takrut tube and strapped onto a waist cord too, and using the four different sides (left right front and rear sides) to induce different effects for love charm, business, or merciful treatment. It is multi purpose because of the Pitsawas magic .

Dark and White Arts - is one Good and the other Evil?

We quote Ajarn Spencer's statements on this matter, tasken from a conversation on Facebook, which was initiated about this item;

"The 'Dark Arts' titling of this type of amulet is deceptive and perhaps makes one think of 'Evil'
the Human being has a tendency to lend illusory abstract concepts to things which occur after they have 'named' a thing. 'Dark Arts' is a word. Words are conditioning In truth, things are what they are, as is all existence, composed of protons and neutrons, positrons and electrons. We may have called antimatter matter, and matter, antimatter, which would leave is believeing that chaos is the way and order is slavery, or that order is the way, and chaos is the plan of the devil. Both are concepts imagined by Humans and have no bearing on reality."

"Entropy is what makes leaves rot, chaos is what destroys the order of one thing, so a higher order can then be built upon its rubble.. dark and light energy are like the positron and the electron, both simply energy, but the dark energy is more powerful in its latency, and, because of its entropic nature to break things into disarray and down again back into their constituent parts (like when our body dies and rots), is dangerous to handle."

"Entropic law (anihillation) and Evolutionary Law (creation), are two sides of one coin. God and the Devil, is a double sided mask, which is worn by the same entity."
"the word D ark Arts in this case, in most simple worldly terms, is a term meaning that it is not made respecting the 5 Buddhist precepts"; 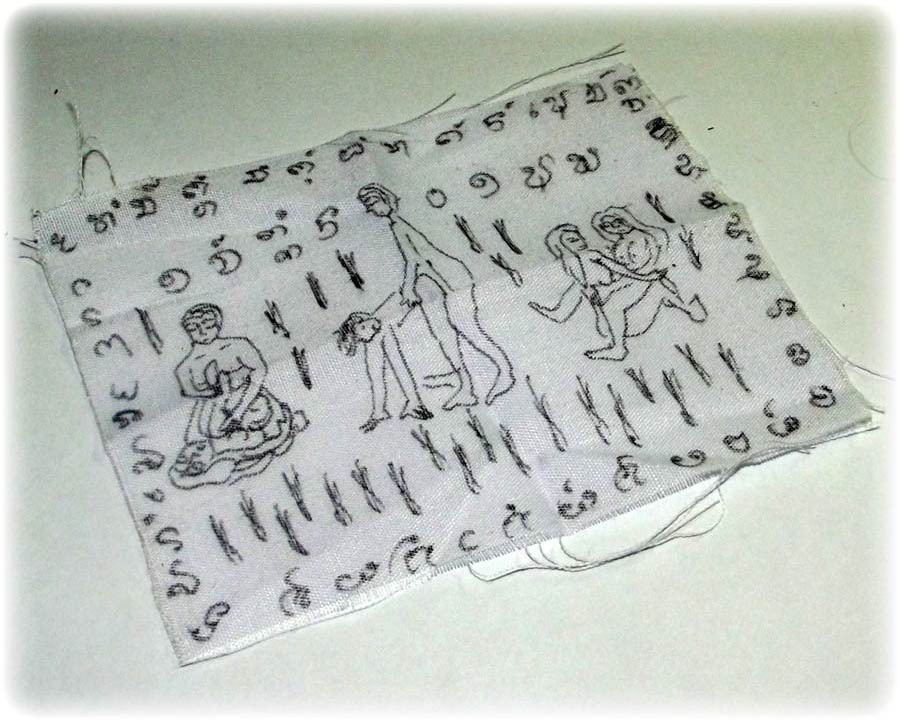 (To not indulge in adulterous or flirtatious activity, through restraint first (Path), and later, through absence of inclination (Fruit of the path).

"So when a monk tattooes a penis yant (Paetch Payatorn/palad Khik) on your inner thigh, he is breaking the Vinaya and should really go and get some jeans on and go to work.
instead of begging food from others to sit doing things that are not allocated as the activities of Bhikkhus. "

"A monk who makes sak yant in true ancient fashion, would only do it on a devotee of his in danger or who has been cursed or is being attacked by black magic or has terrible karma."

As i said "The 'Dark Arts' titling of this type of amulet is deceptive and perhaps makes one think of 'Evil'. This is a conditoned belief. Atomic power can be used for helping or for harm, theb sin or merit lies with the intentions of the doer.
"Entropy is what makes leaves rot, chaos is what destroys the order of one thing, so a higher order can then be built upon its rubble.. dark and light energy are like the positron and the electron, both simply energy, but the dark energy is more powerful in its latency, and, because of its entropic nature to break things into disarray and down again back into their constituent parts (like when our body dies and rots), is dangerous to handle."
"D arkness and light are both necessary components of existence and initerdependent.. where would the planets float if not for empty space? Where would goodness be without absence of goodness? - Non-existent - they are dark arts, because yes sex and procreation are matters of creation, but sex for desire or perverse inclinations or addiction for fun, is 99%"

"Which is following a path of mental and spiritual habits and inclinations (cultivation thereof, on basis of repeated re-seeking of the sensation), which lead to abhaya mukha"

The link in the chain of dependent origination we speak about that makes this a dark path ultimately ini light of the path to Nibbana, is this http://www.accesstoinsight.org/tipitaka/sn/sn12/sn12.052.than.html

The only thing important in Buddhism, is Buddha's teaching, to observe what is in your heart in the present moment with awakened awareness and circumspection and to try to see the Dhamma within all things. If you have sex, and have dirt in your heart, then it is Akusala Dhamma (inauspicous and outside of precepts) but if you do it with pure mind and heart, for the right reasons (procreation for example, or love), then it is Kusala Dhamma and auspicious and a cause of happiness.

Its not what you do, its what you have in mind and heart when you do it.

Ajarn spencer comments; This tiny Pha yant seems expensive for that is visualy there, but in fact, such rare wicha and dark arts sorcery, is always of the more expensive kind in Thailand, as are Laymaster Amulets, for their increased power of Khmer dark Arts Sorcery, unlimited nor restricted by the Vinaya which restrains Monks.