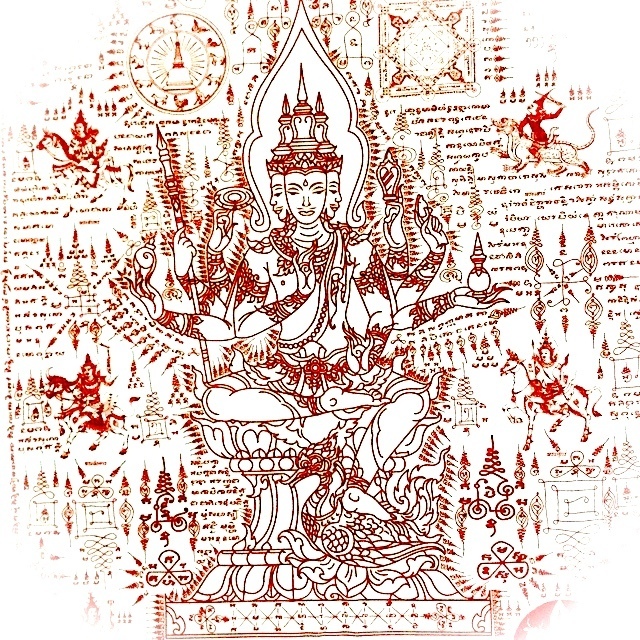 Giant size Brahma Yantra Compendium with the Pantheon of Planetary Guardian Angels, and a host of Sacred Yantra of Buddhist and Brahman Vedic Wicha, from Pra Ajarn Waen of Wat Samakee Dhamma, in Kalasin. The giant size Pha Yant measures 44 Inches high x 28 Inches wide, and contains a vast Pantheon of Sacred Yant, and Sacred Na spells. A most excellent addition for adornment of the wall of anybody's personal Shrine, temple or Samnak.

The spaces between the Yantra are filled with inscriptions of Khom Agkhara spells, full of Metta Maha Niyom, Maha Lap, Serm Duang, Serm Yos, Klaew Klaad and Maha Pokasa Magic. The Planetary Guardian Angels are present, the Yant Duang Astrological Horoscope Improvement spells are sealed below the base of the Brahma God. 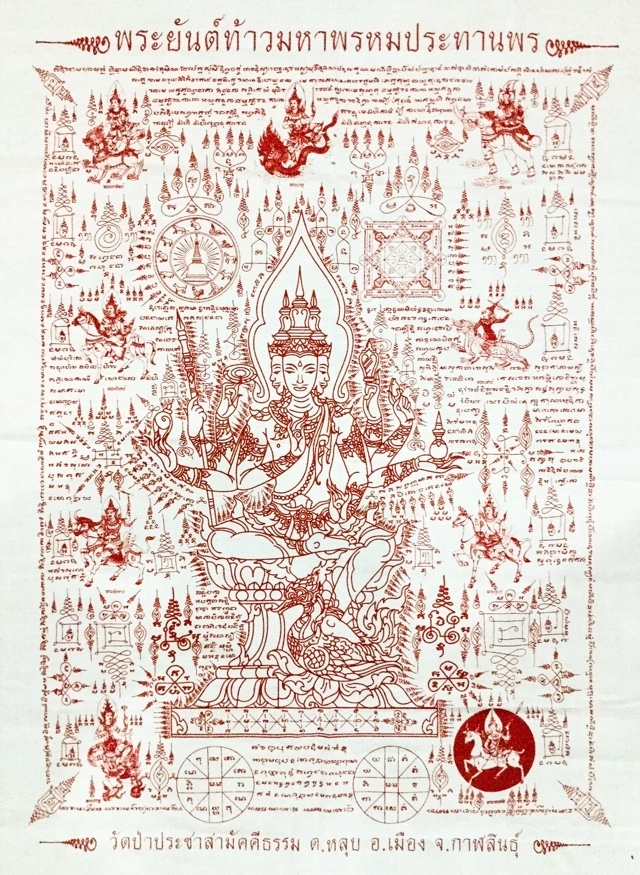 Taw Maha Prohm (Lord Brahma) is seated in the central area of the Yant upon his Heavenly Steed the Hongsa Swan, seated upon his Celestial Throne. The Brahma God has 8 arms, each holding a Cosmic Weapon. A host of Sacred Na spells surround the Brahma, completing every facet of all kindfs of blessings one could desire for in Life. 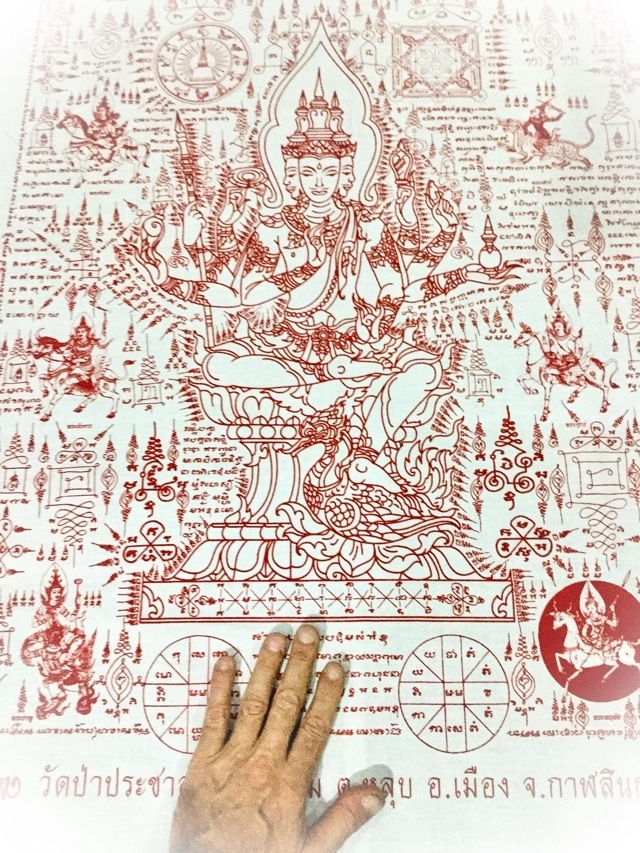 This Pha Yant is hence a 'Maha Yant' (Great yantra) of the Higher Pantheon of Master Yant, which is a Yant 'Koo Cheewit' (Lifetime Companion), to constantly improve your life, and lead you to ever increasing prosperity and higher standards of living.

The Brahma-God is encircled by the various Ruling Planetary Devas of Astrological Good Fortune, Guardian Angels of the Planets and the Days of the Week. Below you can see four of the planetary Devas found within the Yantra, placed next to each other for ease of viewing 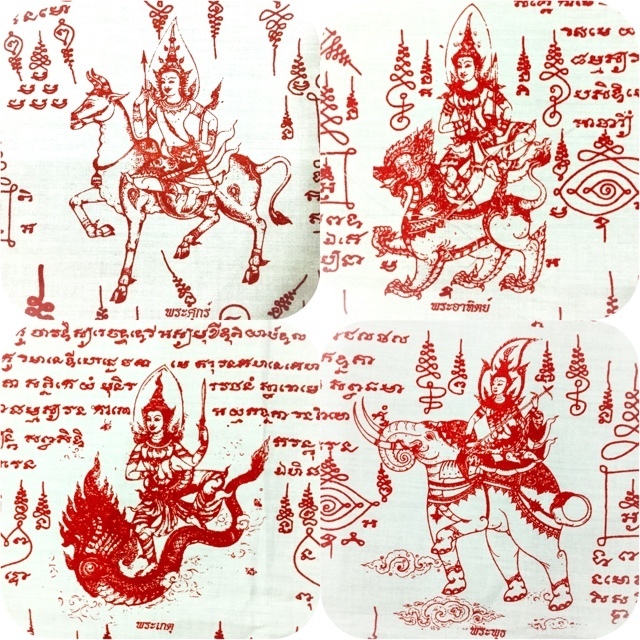 Empowered in Wai Kroo Ceremony with Invitation of the Devas, and the Invocation of the Brahma Deity and the Brahma Devas in Deva Abhiseka - Buddha Abhiseka, with the Brahman and Buddhist Ceremonies both beinig respected and invoked, each with their particular powerful Blessings. 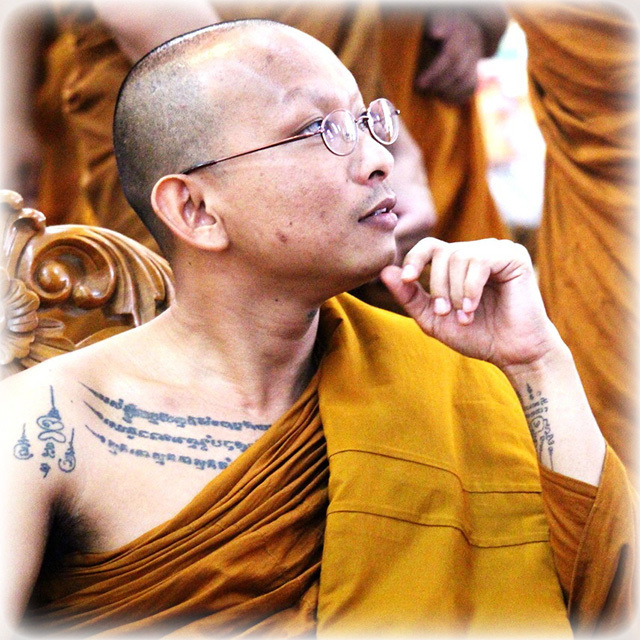 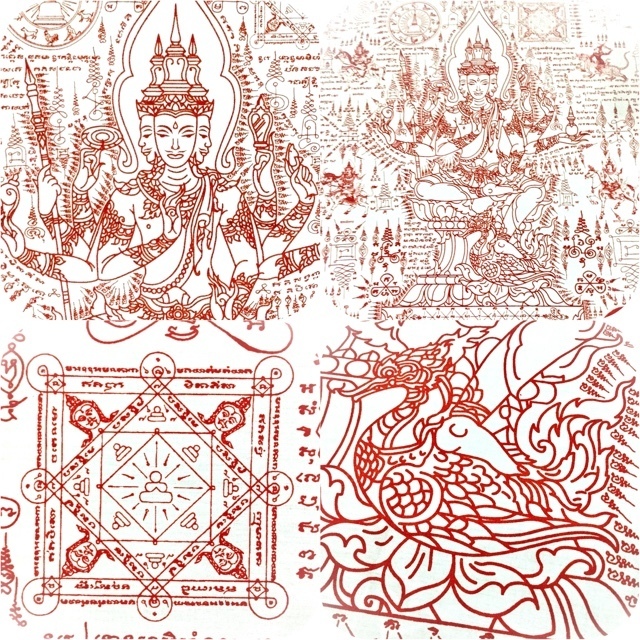 Below; An eight sided (2 x 4 sided interlaced) Yant with five Buddhas and four Brahma Deva Faces, which reflects the close Union of Hinduism and Buddhism in Thai Buddha-Magic 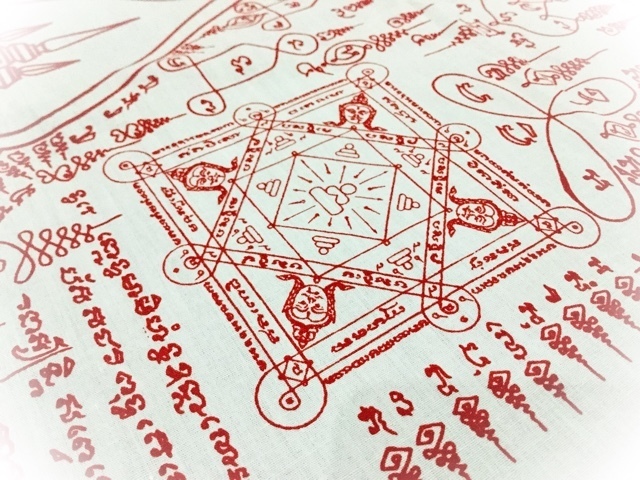 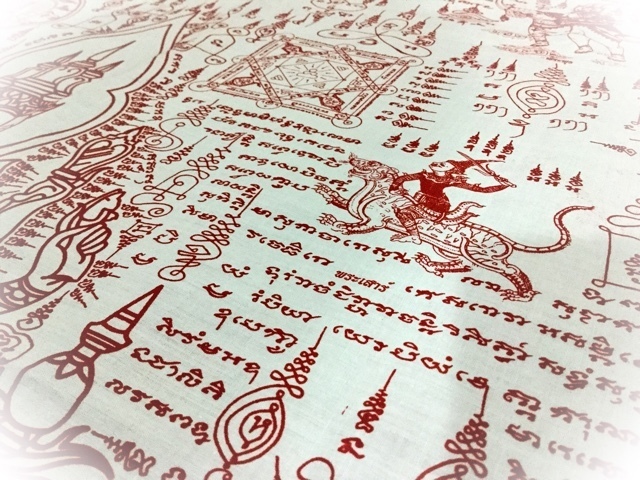 Brahma has four heads, but used to have five. The four extra heads appeared when Gayatri was very ashamed with Brahma’s love for her and tried to escape from his gaze. The tremendous tapas that Brahma had practiced for the purpose of creation was entirely annihilated through his desire to unite with his daughter.

One head was lost later when Brahma lied to Vishnu and thus caused Shiva to become very angry. The four Veda’s are said to have sprung from his heads. In the Life of Ganga, Brahma advised Bhagiratha to ask the help of Shiva in containing the power of Ganga (goddess of the Ganges river) 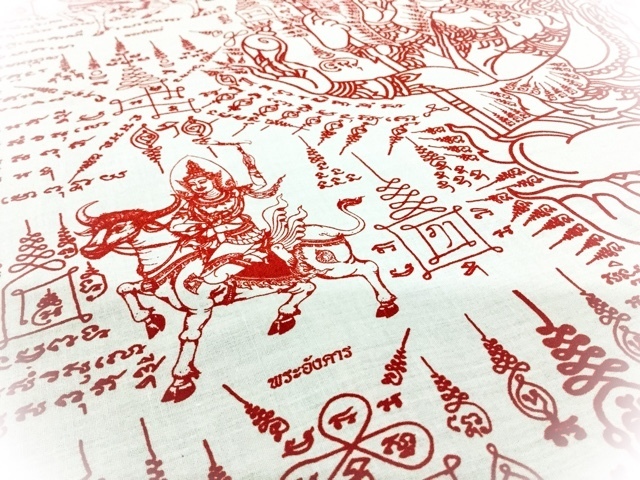 Various Kata Chants for using when making prayers to Pra Prohm (Brahma Deity) – for use with your Thai Sacred Amulets. 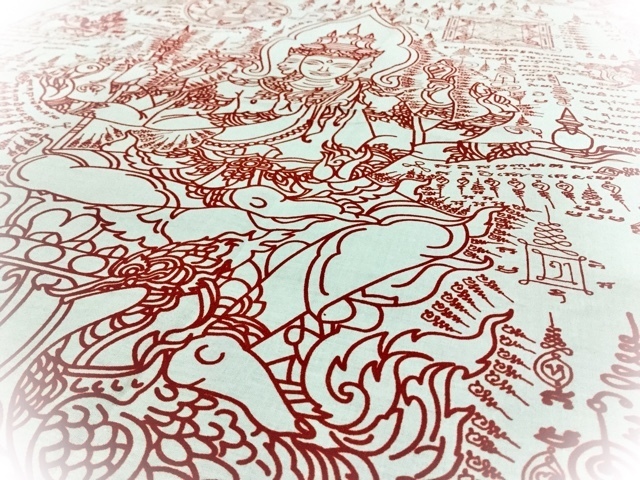 Below; The rubber inkstamp of the temple is stamped onto the cloth 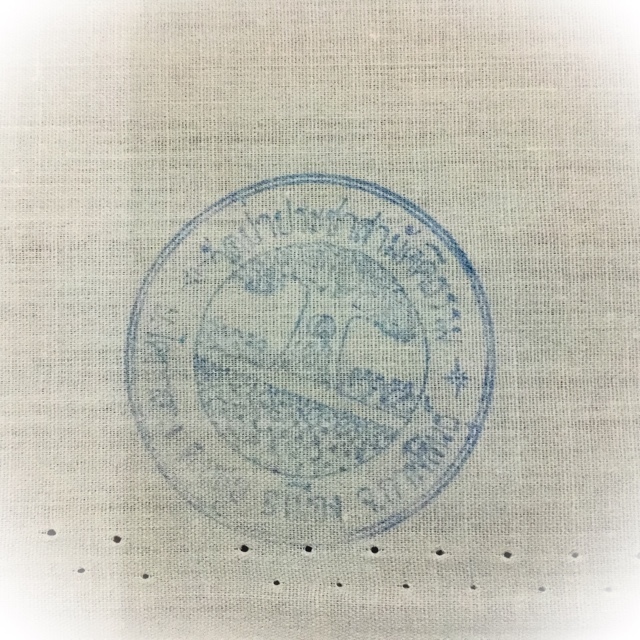 Below; Each Pha Yant has its own individual limited edition series code number - Please note, number of item received can differ from that in the below photo. 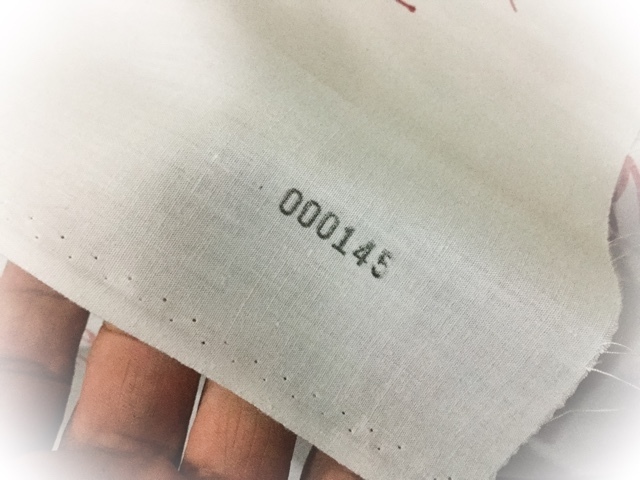 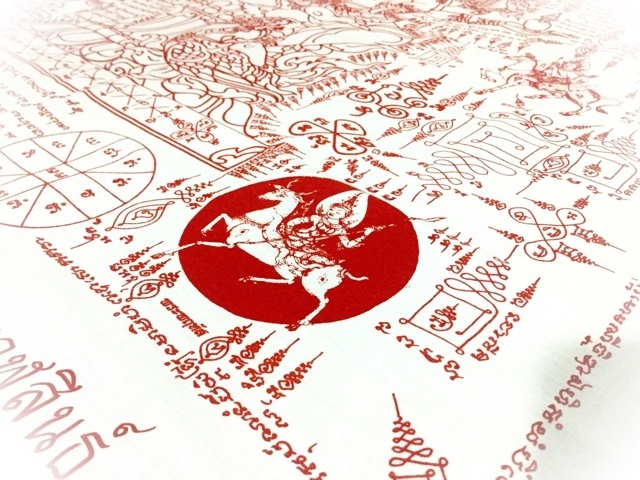 You can also use the Traditional Thai Buddhist Method for Bucha; 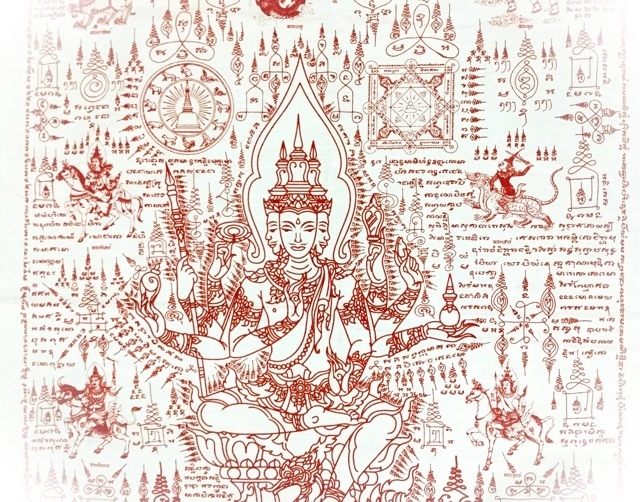 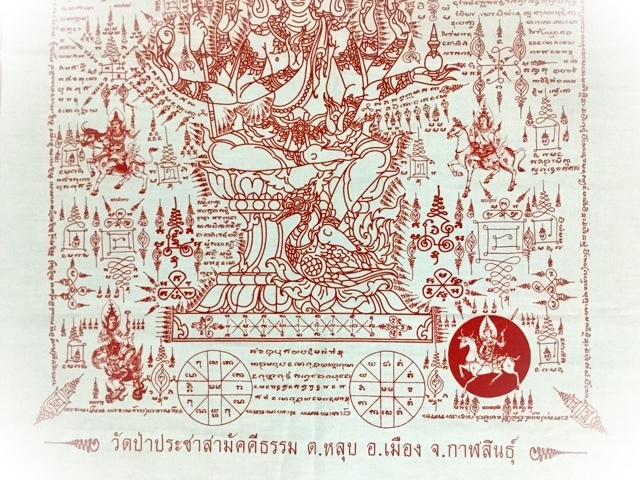 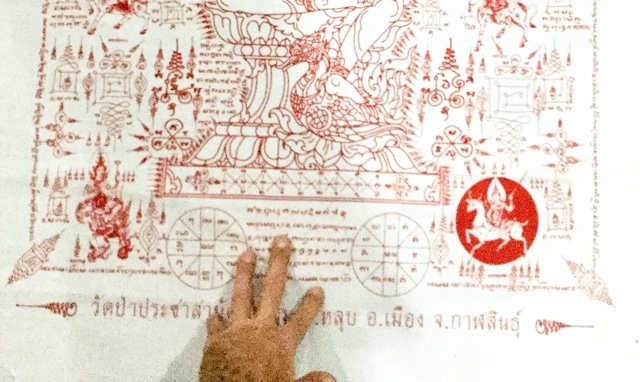 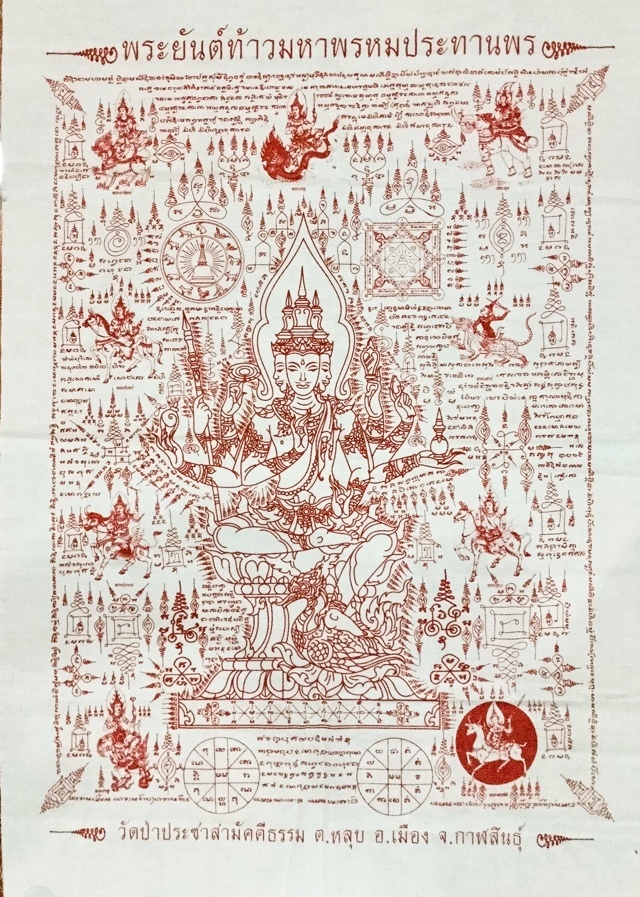