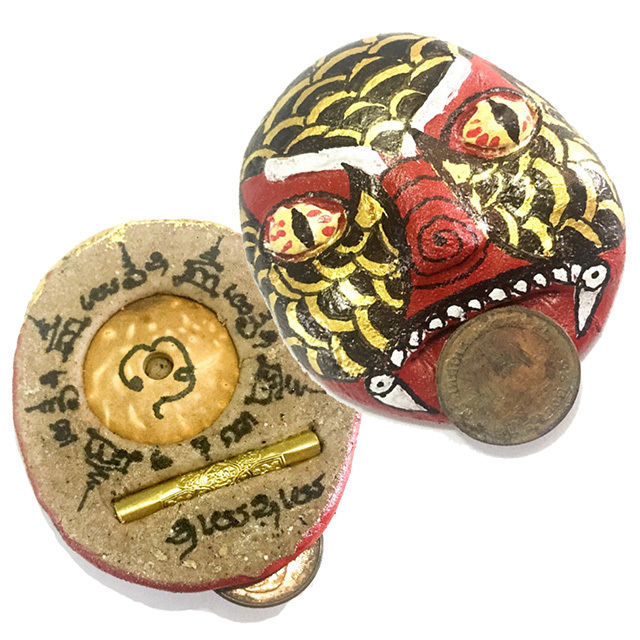 Phii Panan Gambling Ghost Mask Amulet with Gambler Ghost Coin inserted into the mouth, from Lay Necromancer Ajarn Nu Burapa. The amulet is made from hand painted Muan Sarn Sacred Powders, with Corpse Coin affixed to the tongue of the Gambling Ghost. 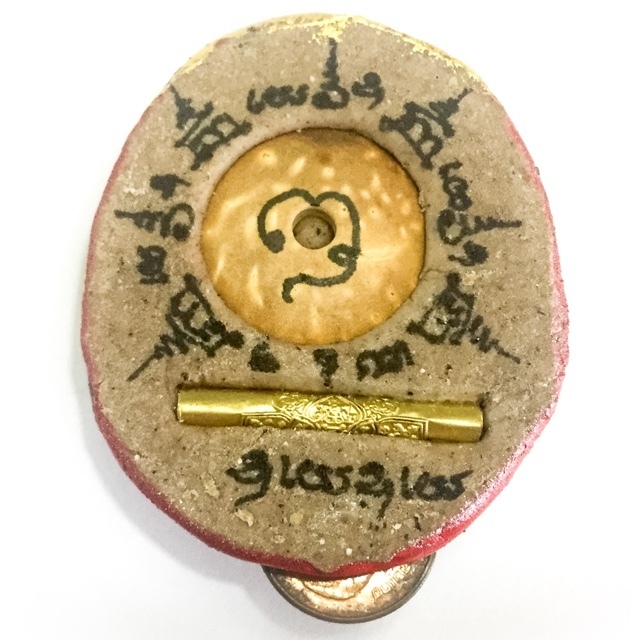 Special concentrated Prai Ghost powders from the Hoeng Prai Corpse of a famously successful gambler were used for the Muan Sarn Sacred Powders of this amulet, with the insertion of a 'Ngern Aathan Nak Panan' Sorcerous Enchanted coin (Ngern Bpaag Phii). 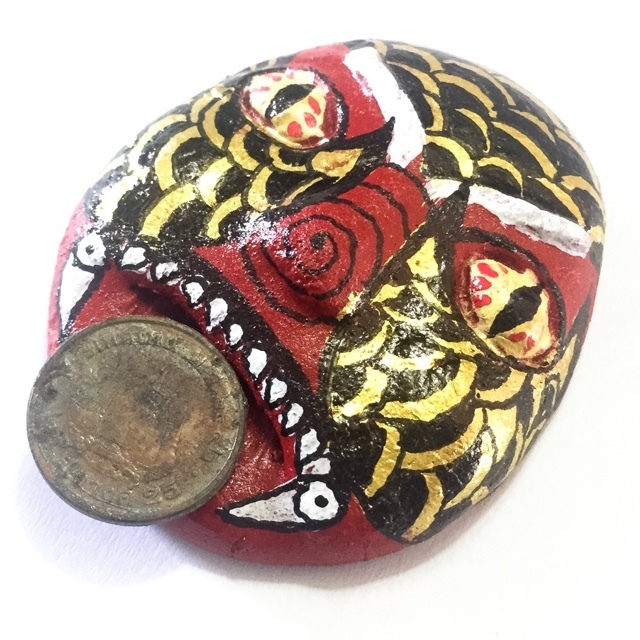 'Ngern Bpaag Phii', is a coin taken from the mouth of a corpse in funeral. In Thailand, corpses have their hands bound with Sincana cords, and have coins placed over their eyes and in their mouths. It is said that the coin from the mouth of a corps has Prai Grasip 'Ghost Whisperer' powers to foretell of lucky windfalls and winning streaks, lottery numbers and the like. 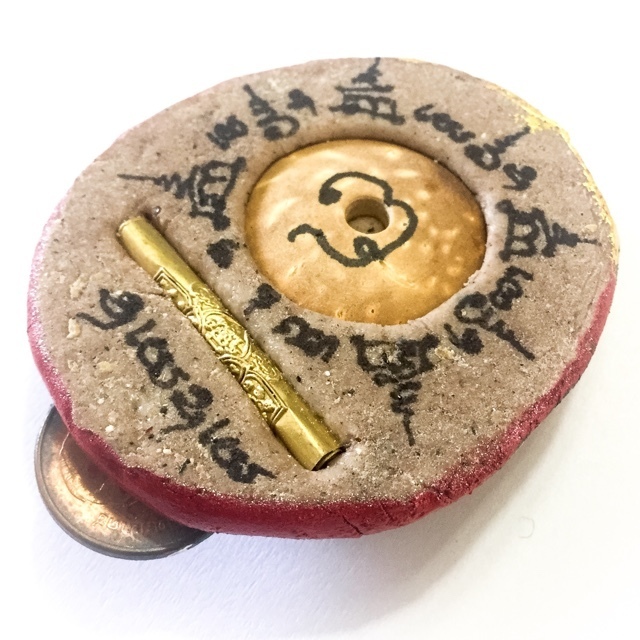 The Phii Panan is hand painted with a grimace of the Gambling Demon, to inhibit the other Gambling Ghosts into submission and has a Gambling Ghost coin protruding as his tongue, to attract wealth and winnings with the enchantment spell within the coin. His eyes are bloodshot and glaring with the frenzy of a Gambler in full winning streak. 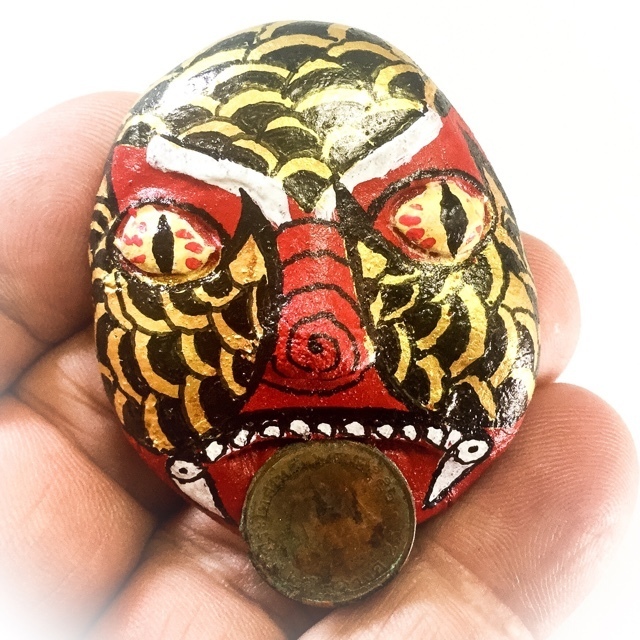 The Ngern Aathan Nak Panan turns the odds in your favour at the Gambling Tables, and the Phii Panan befriends and convinces the Ruling Devas of the Casinos and Gambling Dens throw things in your favour. The Takrut Sethee has a Buddha Crown Yantra on it which invokes the luck of the Millionaire, and calls in wealth and treasures. 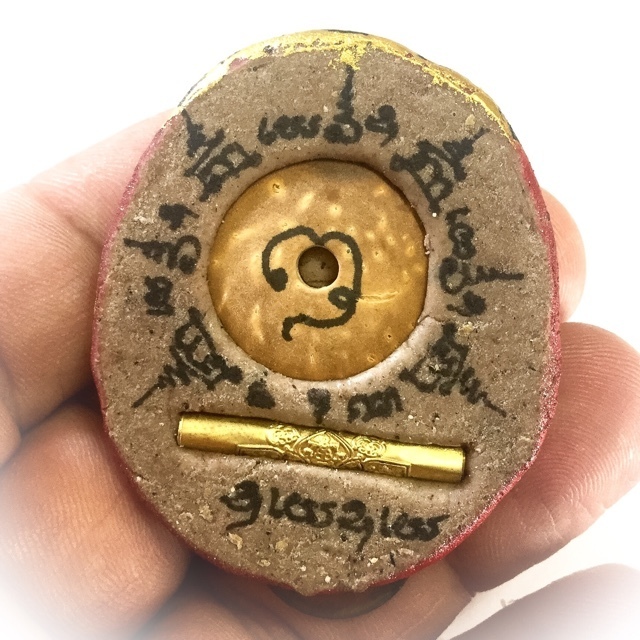 The Prai Muan Sarn Sacred Powders are extremely concentrated with no dilution, for pure Necromantic power of psychic foresight through the power of Prai Grasip which is known to be evident with Hoeng Prai Ghost Powders. Pure powders of bone, funeral earths, ashes and cremation sump oils and serums were used to create this powerful Necromantic Admixture, for effective results. 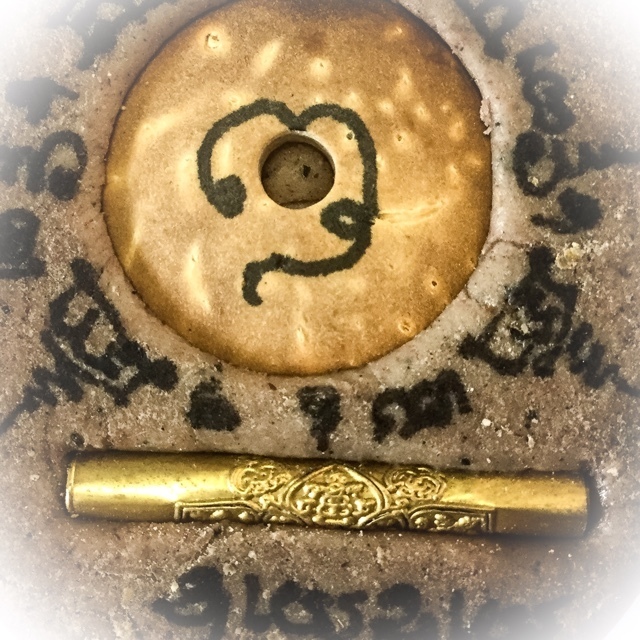 The Invocation Summoning, Awakening and Turning of the Four Elements was performed to Reanimate Living Magic within the Static Form, according to the Ancient Grimoires and Magical Formulas of the Wicha. The Incantations for the summoning of the Maha Phuudt Prai spirit of the Gambling Ghost were performed using the Wicha Maha Phuudt, with all its Elemental formulas. 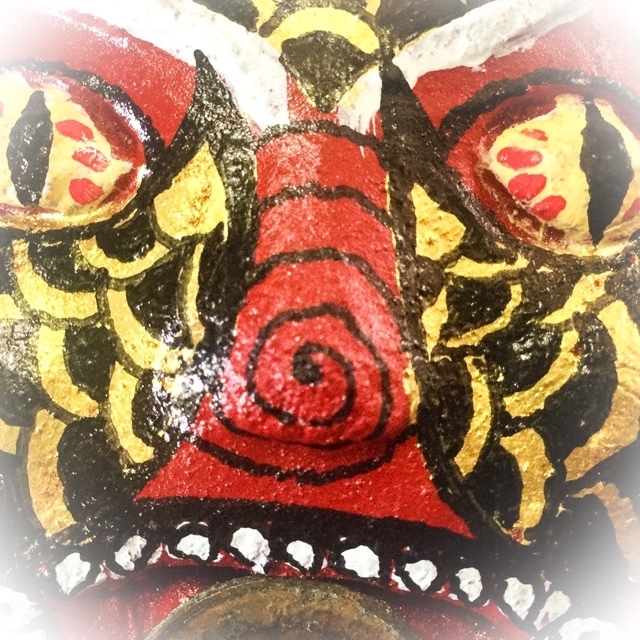 Ajarn Nu Burapa is a Lay Sorceror who is famed for his Necromancy, and especially his Wicha Siang Choke (Gambling Magic), whose amulets have taken on a special importance for those who like to gamble. 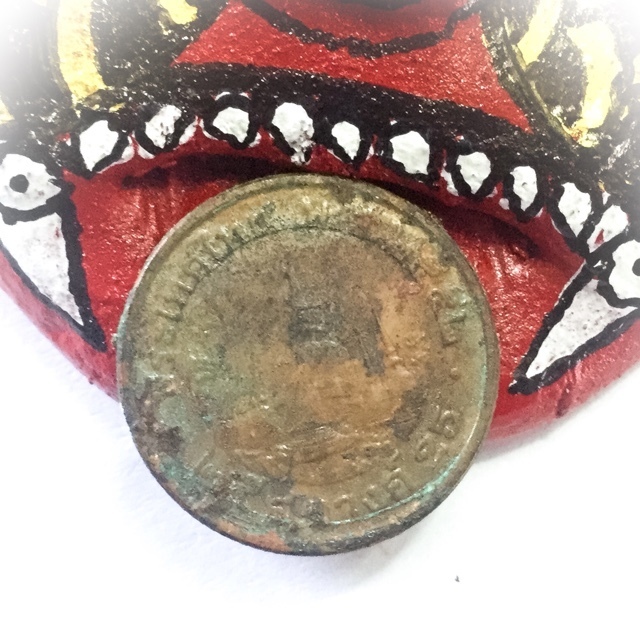 Many gamblers in Thailand use his amulets to achieve success and gain plentiful winnings, and the successes of many of his devotees in their gambling exploits has brought his sorcery to legendary fame as a powerful magic for gamblers. 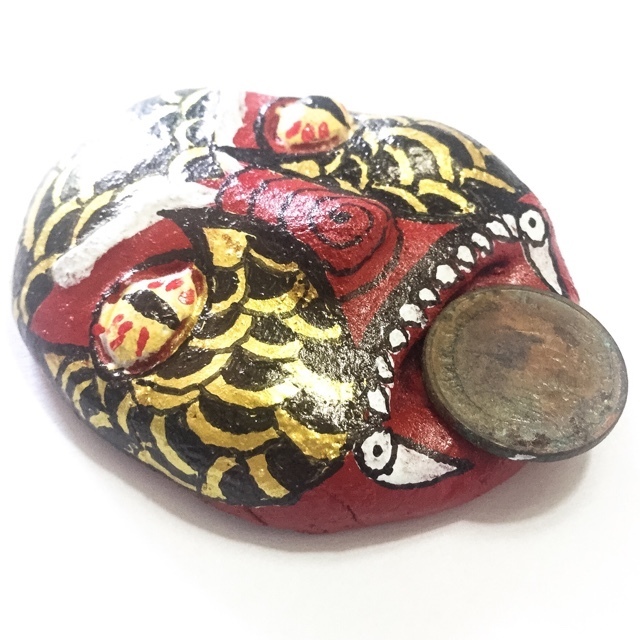 This Phii Panan Gambling Ghost mask was one of a very few Ongk Kroo limited edition release amulets intended for the serious professional gambler who is intensively active in the Gambling Profession, to invoke the highest power possible to influence the Ruling Devas of the Gambling Dens, to open your odds and chances up of consecutive wins. 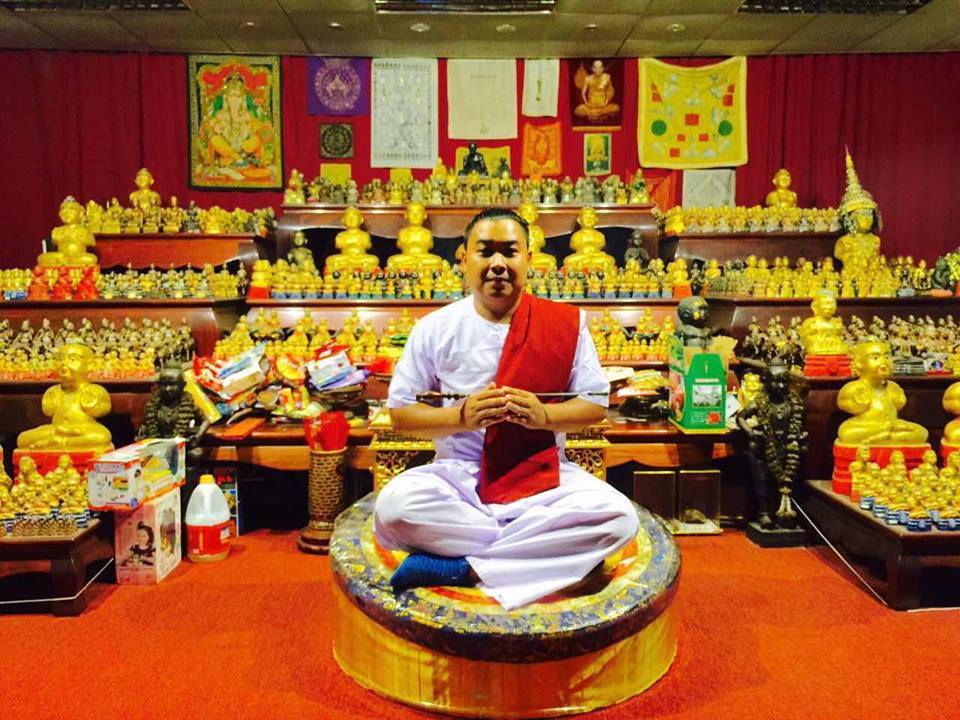 The Prai Grasip powers of the Phii Panan warns of pending dangers, protects from Black magic and Dark Spirits, and perhaps more interestingly, will bring you the warning in the form of an intuitive feeling, when Lucky Windfalls or Winning Streaks are Imminent. It Warns of Dangers as well as Lucky Opportunities. 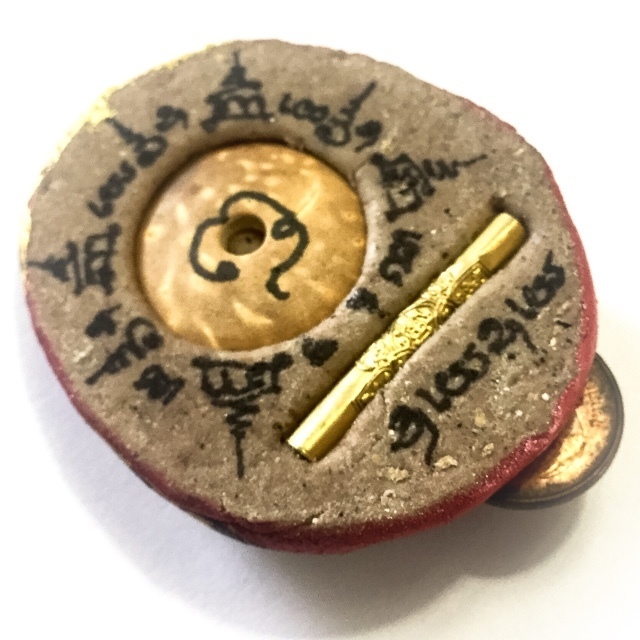 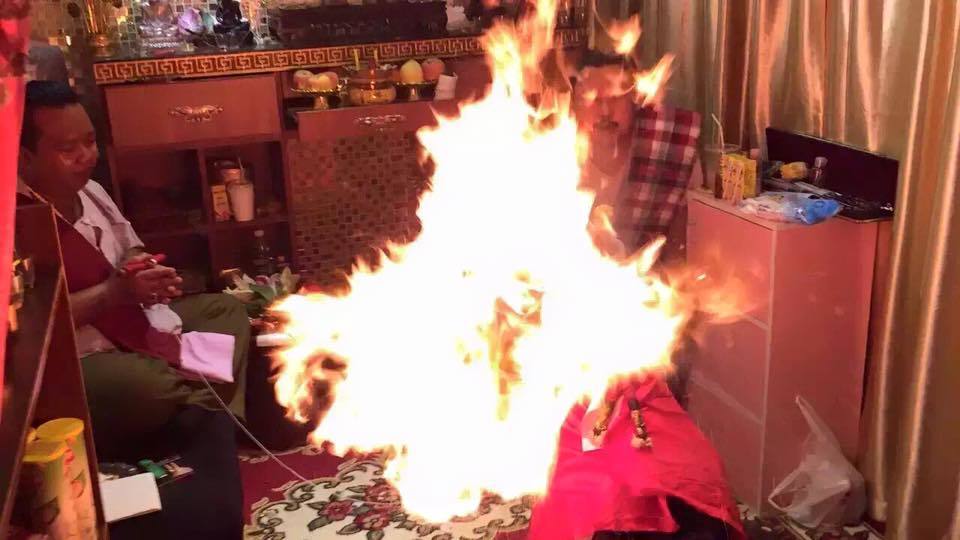 Ajarn Nu Burapa is currently one of the most popular Lay Sorcerors for his Maha Sanaeh and Maha Lap Siang Choke magic using powerful Necromancy, with Kumarn Tong, Gambling Ghosts, Nam Man Prai, and many other kinds of Talismans and Mercy Charm amulets. 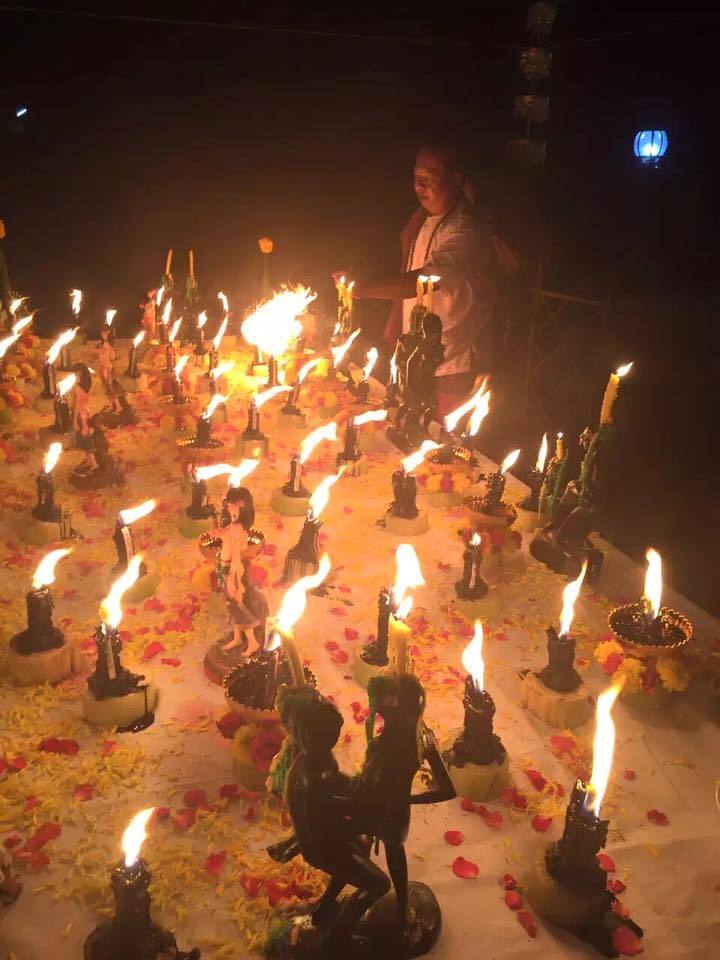 His Wai Kroo ceremonies are always flooded with devotees, who anxiously await each new edition of amulets with great fervour. The successful results of his amulets have caused his amulets to quickly deplete and sell out with every new edition, as it seems there are always more devotees who desire an amulet, than there are amulets made. 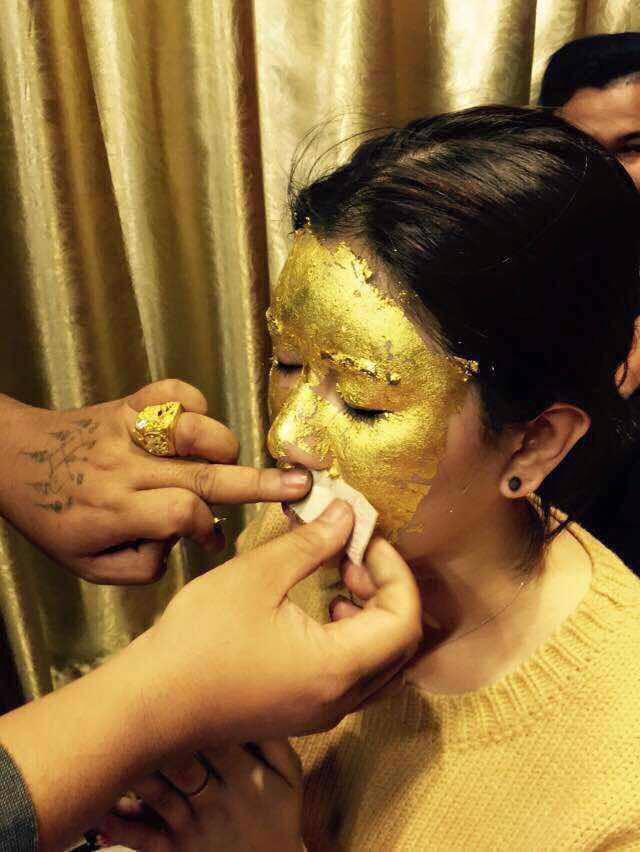 Ajarn Nu is also very famous for his Sak Yant Thai Temple Tattoos, and his Na Hnaa Tong Gold Leaf Face blessing, which has brought so many Devotees success in their professions, and social lives, improving Mercy Charm and chances of Promotion, and making Business easy with the Golden faced Mercy Charm spell. 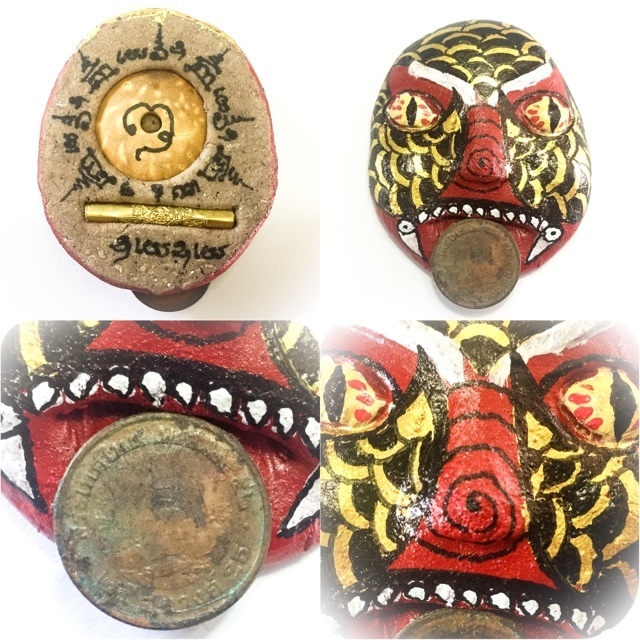