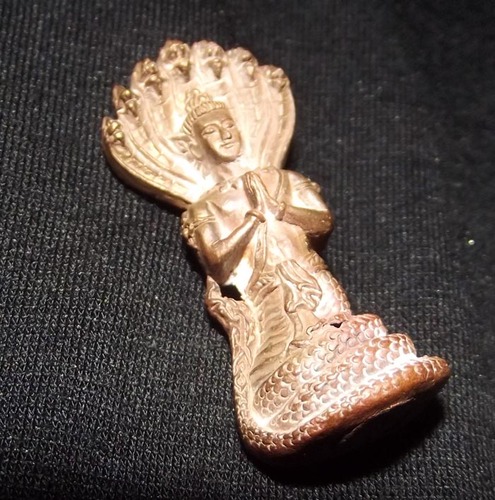 Made From Nuea Samrit (Bronze) smelted from ancient sacred Artifacts and Yantra Foils, with some Sacred Powders inserted within the Loi Ongk Statuette. Empowered with Kong Grapan, Klaew Klaad and Maha Lap Magic, and Invoked with the Deva Phu Sri Sutto Nakarach, the Naga King and Ruler of Bhodala (Mueang Badan), the Underworld Kingdom of the Nagas. 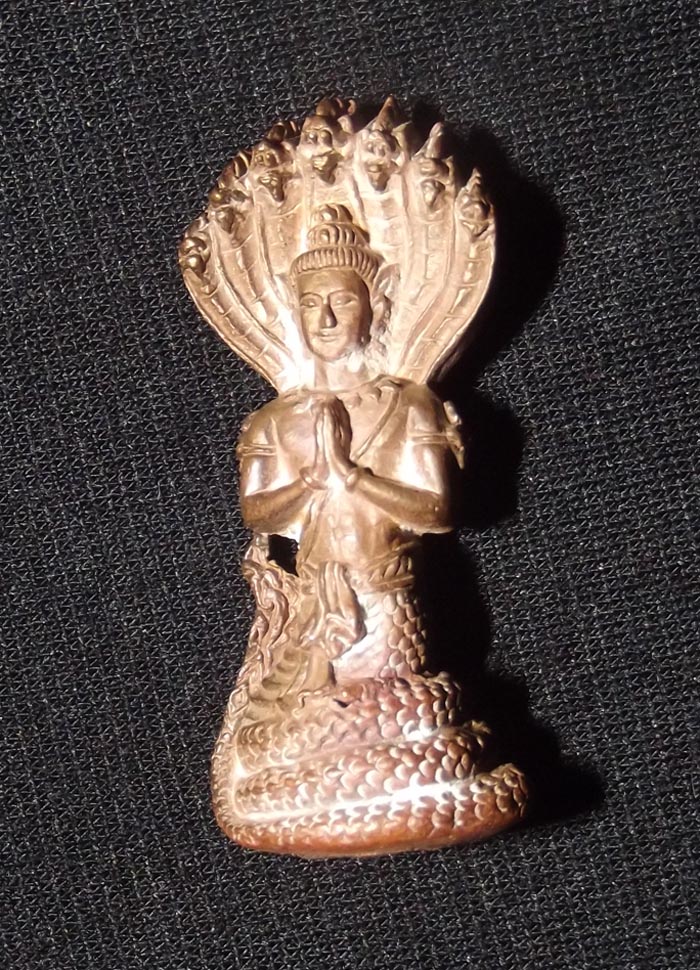 It is not possible for the Nagas to Remain for Very Long in the Dimensional Sphere of the Human Realm. The God Indra bestowed the Nagas with Three Entry Points to the Human Realm. One in Vientiane (Laos, One in Nong Kante, and the third in the 'Prohm Pragay Loke' (Kam Chanote in the Mekhong Region). 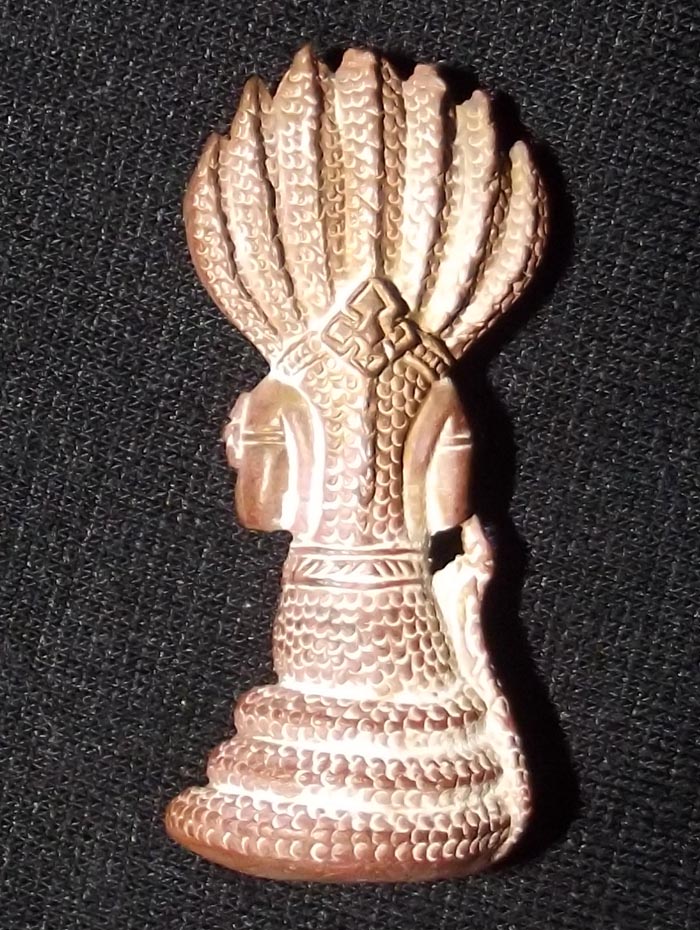 The Statuette can be worn as an amulet, kept on the Altar (below Buddha images, not above) for Bucha, or even be used to Make Holy Water to use for blessings and protections (spray on objects and persons). 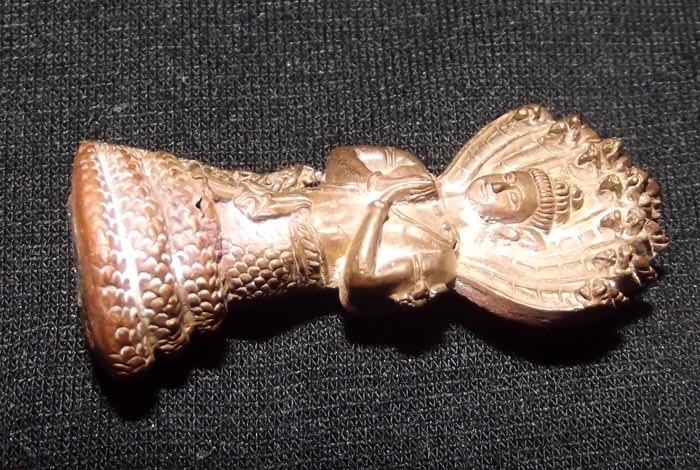 The statuette is stuffed full of Sacred Powder Paste with powerful Kong Grapan, Klaew Klaad and Maha Lap properties to Protect from Dangers and attract Wealth, Power and Success. 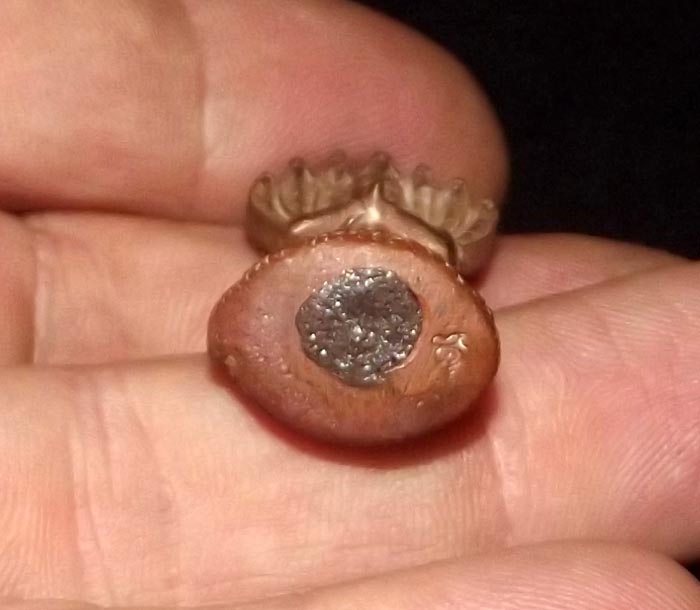 The Great Luang Phu Kampant Kosa Panyo of Wat Tat  Maha Chay, Nakorn Panom, said that there are Six Great Kings of Nagas along the banks of the Mekhong between Laos and Thailand, which he calls the Nakatibodee. The Laoatian Side dwells Paya Sri Sadta nakarach, and the Thai side is inhabited by Paya Sri Sutto Nakarach. Paya Sri Sutto liles to keep the Sila (Moral Virtues) and Practice the Dhamma. He has a Gentle and Compassionate Manner. He does not like to Challenge or Disputes, and likes to practice Dhamma in Nakorn Panom. When he is practicing his Austerities he then hands the Administration of the Area over to the Six 'Amamaj' (Captains) of the Nagas, to watch over his Kingdom whilst he Practices.

The Metta Baramee of the Naga King brings a very similar effect as the Pra Sivali amulet, bringing Riches and attracting Metta from others. Popularity, Success, Promotion, Wealth and treasures. In addition, Protection against Black Magic and Evasion of Deadly Dangers is also bestowed upon His Devotees. The Temple of Luang Phu Hmueanb is situated in Nong Kai and is extremely close to the Abode of Phu Sti Sutto, Luang Phu has called upon Phu Sru Sutto to empower the amulets with the power of his presence and bestows blessings of protection and prosperity to the Devotee.

Comes in Original Box from the Temple - can be encased if desired. 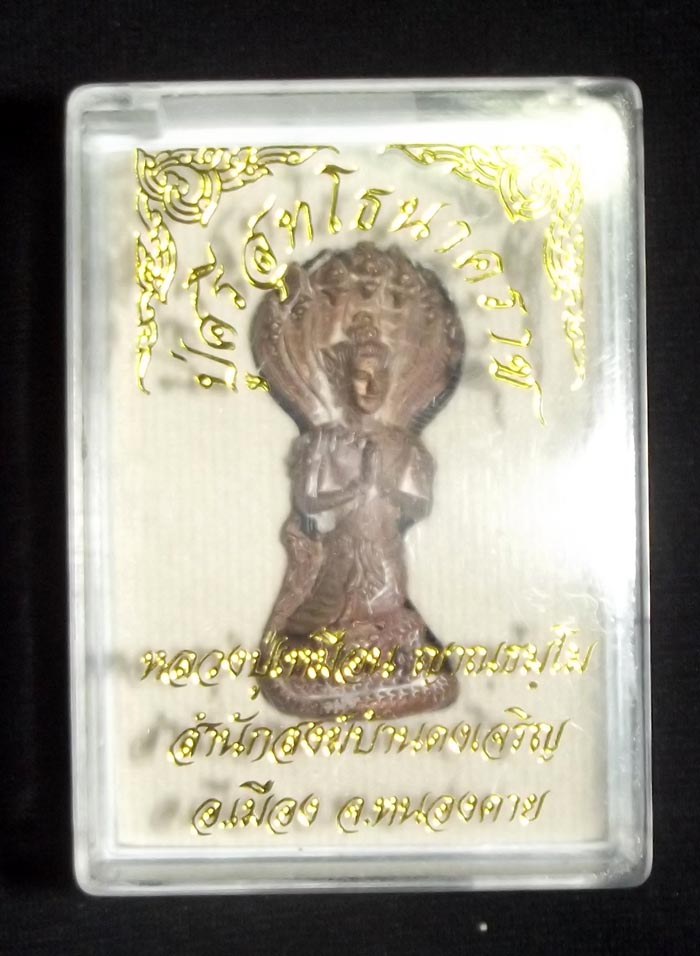