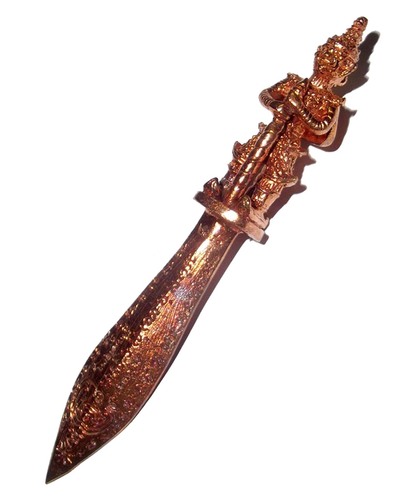 Taw Waes Suwan with two faces is the Ruling deva of this Ritual Sceptre Knife (Pra Khan), with sacred Khom Agkhara Spells covering the face of the blade. Two different Taw Waes Suwann hilted Ritual Sceptre Knives were issued in this Edition, each of them available in two sizes (12 or 19 centimeters long), and in two different metals (Nuea Chanuan Nam Rerk, or Nuea Nava Loha).

In addition to the Taw Waes Suwan Sceptre Knives, there were some Two faced Taw Waes Suwan Loi Ongk Statuettes, which are not officially mentioned in the Brochure, because of the fact that only 200 of these amulets were made in all, and were mostly snapped up in one day in the ceremony.

The Nuea Chanuan Nam Rerk Versions were smelted and cast with hand inscription during the ceremony by Luang Por Jerd, whereas the Nava Loha Versions were Pre-Cast with Inscriptions and blessed in the Ceremony. 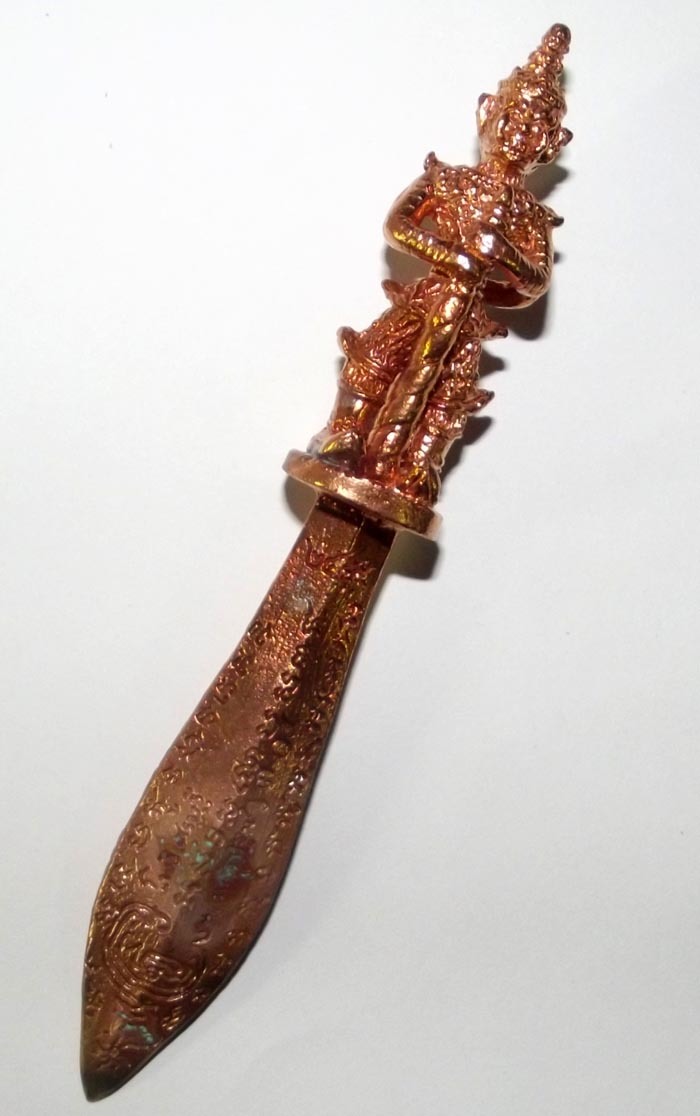 The Taw Waes Suwan Yaksa Deity, is a Powerful Deva to Pray to for Success and Prosperity, Immense Wealth accumulation, and protection from all forms of Demons and black magic, ghosts and Inauspicious Negative Energies. Taw waes Suwan is an Accomplished Meritorious Wealthy Lord, whose great successes and efforts resulted in his amazing wealth and power over his minions. This elevated him to the Status of a Deva in the Dawadeungsa level of the Celestial Heavens.

He also keeps Illnesses away because his Minions, the Yaksa, are principally responsible for entering the bloodstreams of children and adults and invoking viruses and illness. Those who revere and rtecive the protection and blessings of Taw waes Suwan, are protected from the Yaksa by his Command, the Kata Aadtanatiya Paritta. Taw Waes Suwan is also the Deity for Businessmen and High Level Careers to worship, for he is the Asura King of the Norther Quarter and the Richest Asura of his Realm. He commands all the nether Yaksa demons and can punish unruly monsters with his Adamantine Diamond Crystal club.

The first side deals with the act of chasing away and warding off Yaksa, Maras, Ghosts and Demons, and protects from all enemies. If he guards over you, the Asura and other Monsters will not dare to bother you, for he is indeed their King, Lord and Master and his Kata can bind and control them (The Aadtanatiya Paritta). His crystal club punishes any who dare to risk coming near with thoughts of harm. 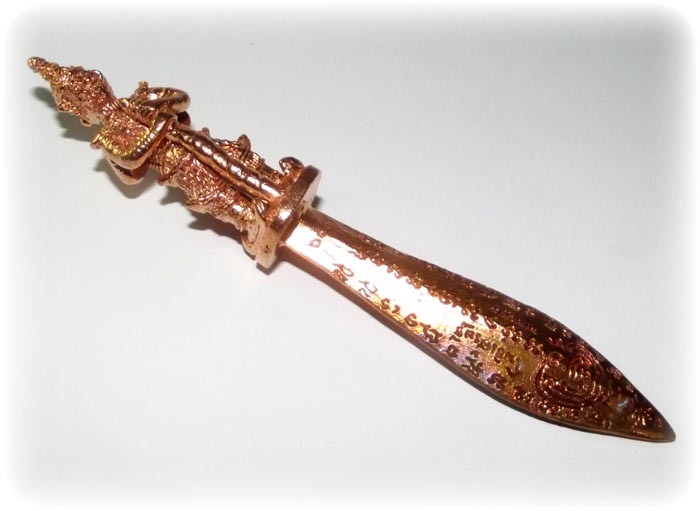 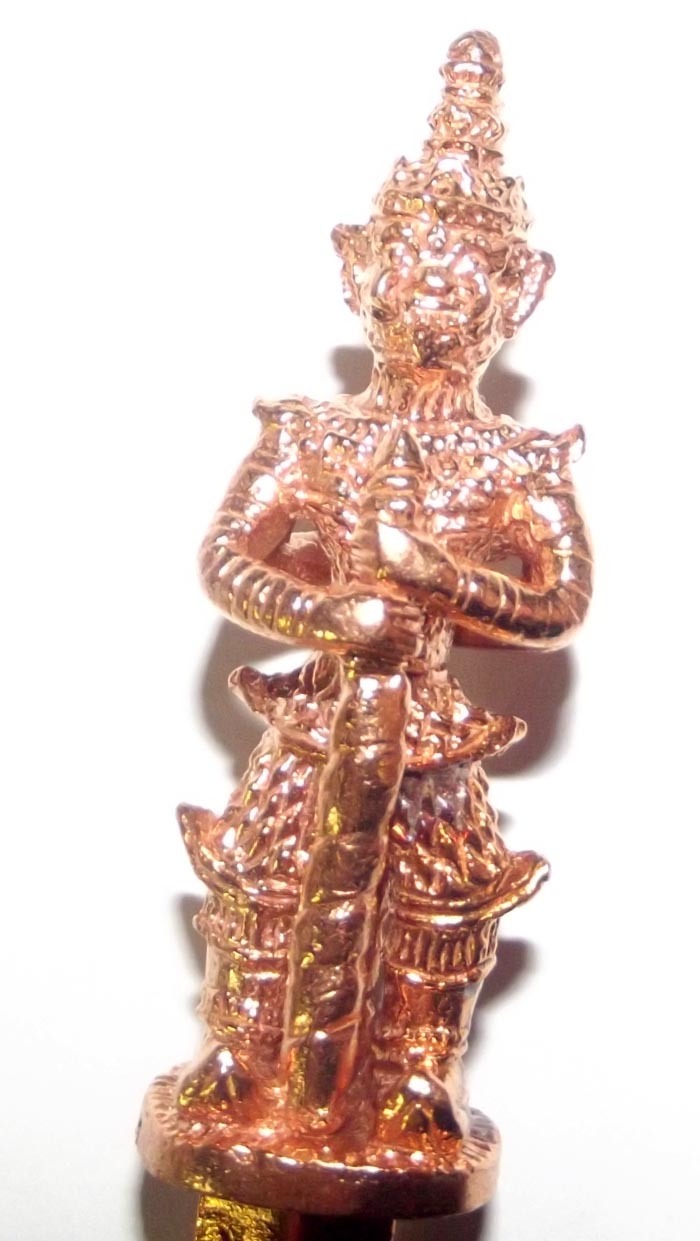 The second side is Taw waes Suwan the accomplished Wealthy Lord, whose great successes and efforts resulted in his amazing wealth and power over his Yaksa Minions. This elevated him to a Deva in the Dawadeungsa level.

The Pra Khan can be used not only as a Bucha Item on the Altar, but is also a Pro-Active Ritual Instrument for making Prayer Water or Bestowing Blessings, Banishings and the like. Used by Ajarns, Lersi and Sorcerors as a multi purpose tool that covers many functions, and serves all the purposes that a 'Meed Mor' Ritual Exorcists Knife, or 'Mai Kroo' Sorcerors Wand will perform. 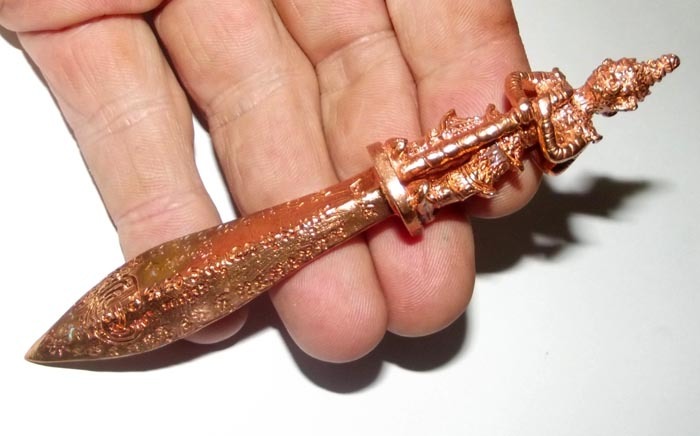 The Pra Khan come in two different kinds of Sacred Metals, Chanuan Nam rerk (A sacred alloy made from Smelted Artifacts), and 'Nava Loha' (Nine Sacred Metals with some of the Sacred Artifacts Mixed in). The Nam Rerk Version also differs in the fact that they were Inscribed during the Ceremony by Luang Por Jerd.

All of the 'Chanuan Muan Sarn' (Sacred Metallic Ingredients) were then smelted together until they became one Sacred Alloy, and cast into oblong blocks to harden. Then Luang Por Jerd performed Inscription of Sacred Yantra and Khmer Agkhara Inscriptions upon the exterior of the Sacred Metal tablets. They were then Empowered for a period of Seven Auspicious Tuesdays, before being given to the Artisans to Cast into the forms of the Pra Khan Maha Bpraab Taep Sastra Taw Waes Suwan Ritual Knives. This method of empowering the base substance for the casting is called 'Dee Nai' (good stuff on the inside)

The Ritual Knives were then given again to Luang Por, who performed a series of Incantations and Blessings, and then Opened a Ceremony to perform the Ritual of Calling the Taw Waes Suwan Asura Deva and the Kroo Ba Ajarn of the Ages. The empowerments continued for a period of Nine Days and Nine Nights. This empowerment fof the fully cast and completed Taw Waes Suwan Sceptre Knives, with the assistance of Monks and Devas is called 'Dee Nork' (good stuff on the outer surface).

These Bucha Items were thus empowered as 'Dee Nai - Dee Nork', meaning that the base substance is powerful and sacred through and through, even before being formed into the shapes of the Asura Deva Knives. And that they are also Powerful and sacred on the Exterior and in the Form they have been cast into, with the Presence of the Mind Powers of the Taw Waes Suwan Deity Inherently embedded.

2. Protecting from Demons and Evil spirits, Black Magic and other Inauspicious Energies or Circumstances.

4. Using as a Wand for Performing Blessings and Spell casting, Inscription of Spells on the forehead, crown, tongue etc.

Before beginning to use the Pra Khan in General use, you should Invite and Activate the Pra Khan with Prayer. Chant the Maha Namasakara and think of the Triple Gem (Buddha, the Universal truth of the Dhamma that he taught, and the Sangha, the Beings who have attained the Purity of the Noble Ones). Think then of Luang Por Jerd, and his Power will awaken and run thgrough the Knife as Spiritual Energy, awakening the Powers and the Presence of the Mind of the Taw Waes Suwan Asura Deva, to Dwell within the Ritual Knife, and begin emanating Fortunate Blessings and Magical Protections.

Use the Kata for; 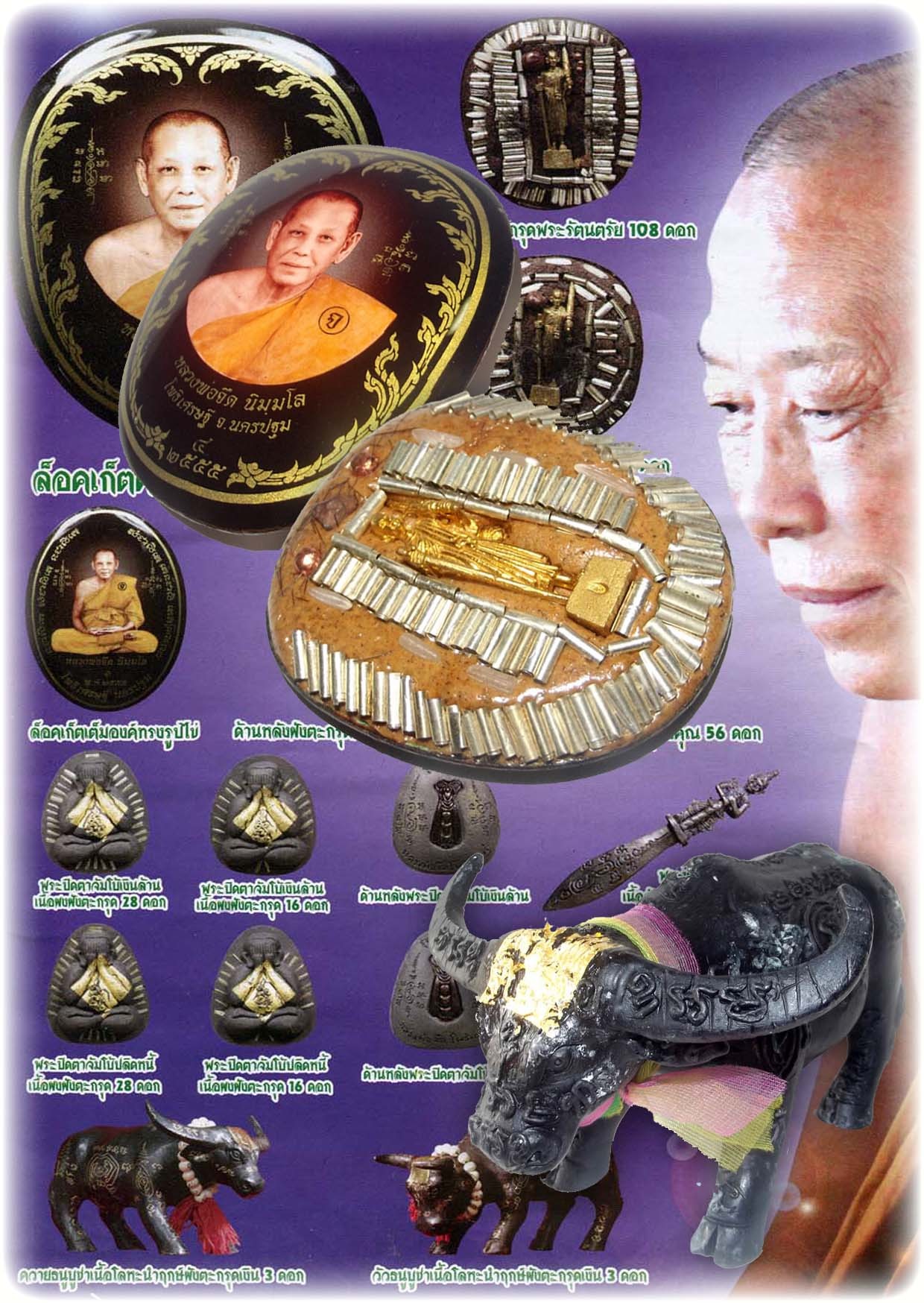