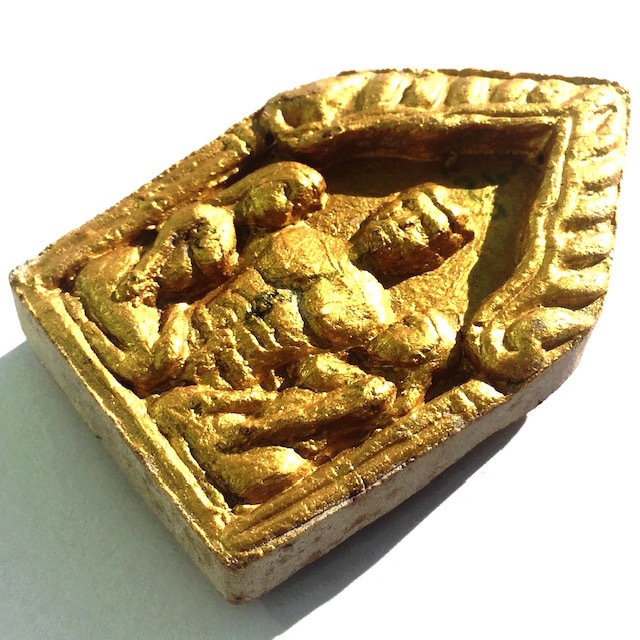 Ultra Rare Amulet - Made quite some years ago in 2552 BE, this limited edition of only 50 Pra Khun Phaen Amulets ever made, is a now highly sought after and famous edition amulet, and is extremely rare nowadays and as you can imagine, with only 50 amulets made in this version, is also an extremely rare amulet, from the Great Lay Master Ajarn Meng Khun Phaen.

The 2552 BE Pra Khun Phaen Sariga is Now a very famous edition, and even more higly sought after than some earlier editions, due to the very high number of success stories which have come back from Devotees, which caused the surety of success of these amulets to become highly valued with those who know of its famed powers, 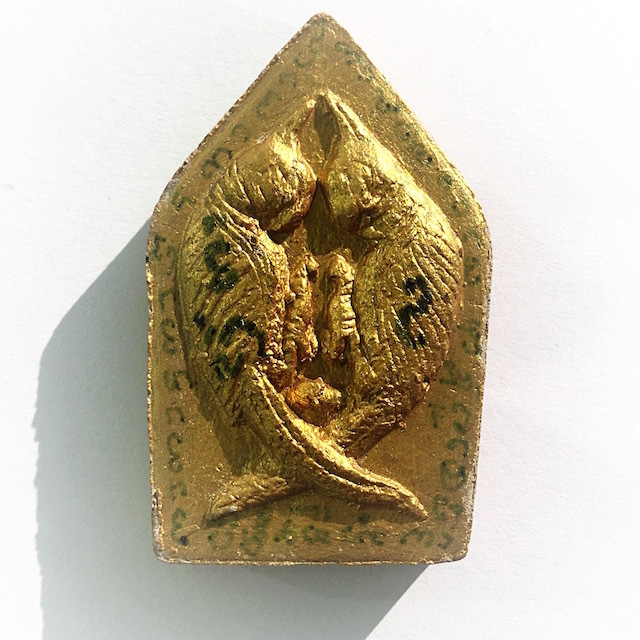 This Ongk Kroo Super-Limited edition Khun Phaen was Hand Made and Pressed by Ajarn Meng himself, using Pure Pong Prai Chang, Prai Hmeuy, and Wan Sabu Luead Powders. Ajarn Meng has empowered each amulet again finally with some hand written Magic Spells in Ancient Khom Agkhara on the surface of the Sacred Powders of the front and rear face. A pair of twin Sariga Koo Celestial Mapgies are entwined in Mating Embrace on the rear face, imbued with the Wicha Sariga Koo, Sariga Maha Sanaeh, Sariga Lin Tong, and Sariga Bon Hyuea. 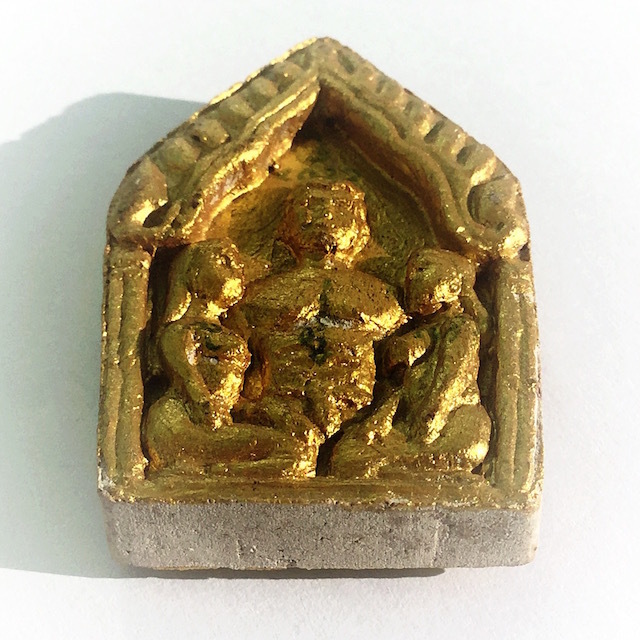 Only 50 Hand Pressed Amulets were made in Total, as an Ultra Special Limited Edition of Ongk Kroo Amulets

The amulet has an image of Pra Khun Phaen hugging a Maiden, with the curtains spread wide open to view them both within the bedroom. This is the Pra Khun Phaen Ba-Cha-Dta. The Ruling Deva of the Wicha Ba Cha Dta, is Originally a form of Khun Phaen Maha Sanaeh type amulet, mixed with the In Koo lover pair Deity. and in fact many editions of Khun Phaen amulet have been called ‘Ba Cha Dta’. 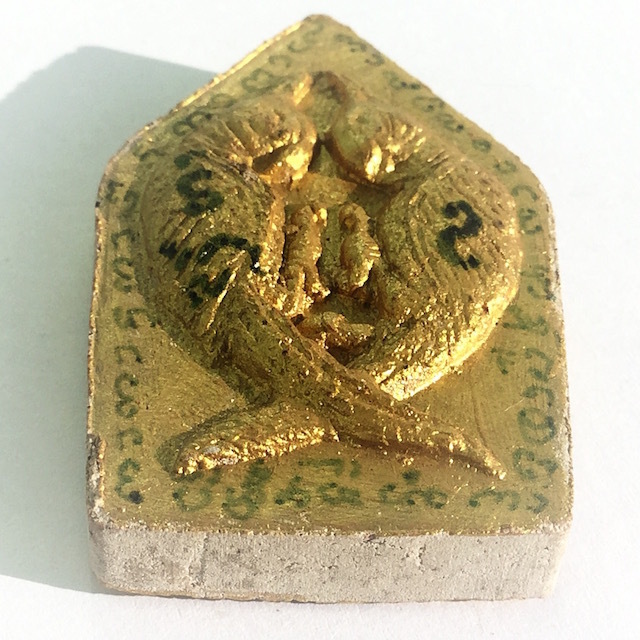 It is therefore also a Variation of the Paetch Payatorn Deity too (Taewada Hlong Hong). Its prime purpose is as a Love Charm, but is also used as a Powerful and Effective Business aid to increase customer and sales. The Ba-Cha-Dta spell is usable for both Heterosexuals and Gay Persons to enchant same or other sex. 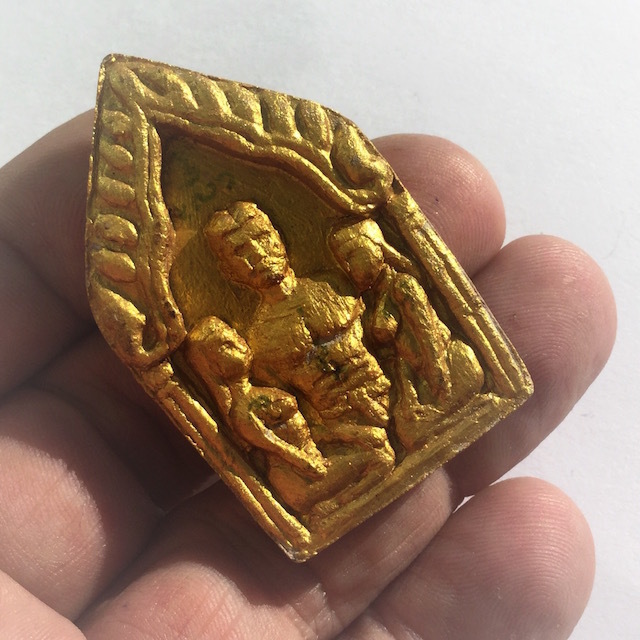 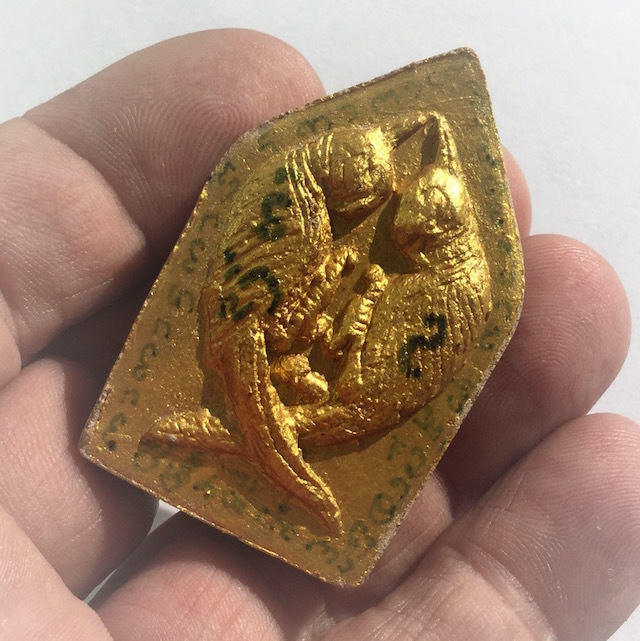 Khun Phaen is embracing two Apsara Maidens, who he has enchanted and seduced, due to the Prai Powders, and Khun Phaen's Mastery of Wicha Akom. Apart from being a highly potent Seduction and Mercy Charm and Wealth Bringer, the Amulet provides powerful protection against Black Magic 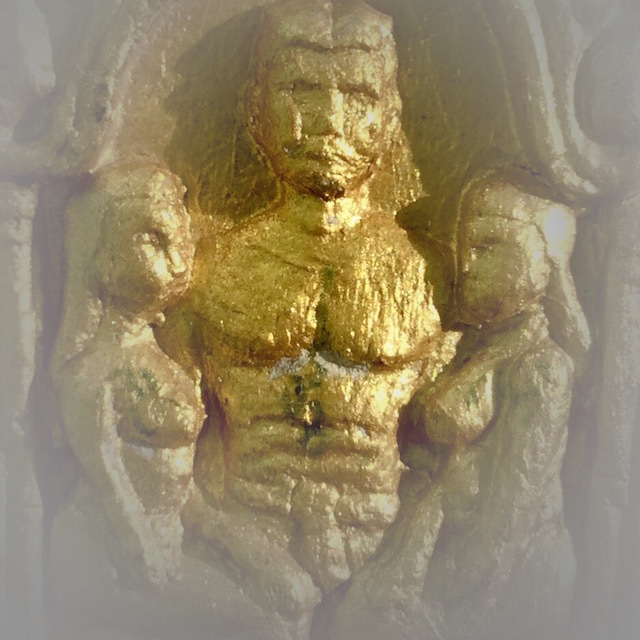 The amulet was hand pressed in hand made block press by Ajarn Meng Himself, and limited to a total of only 50 Ongk Kroo Amulets in Total 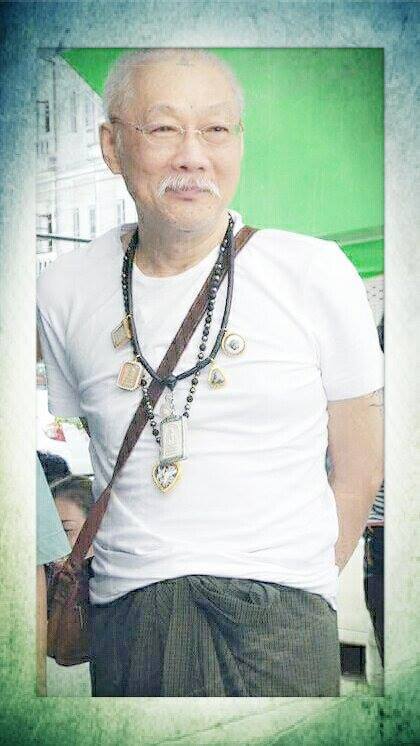 Ajarn Meng is one of Thailand's leading, Most Famous and Long standing Masters, whose Trajectory reaches back to touch the Previous generation of some of the Greatest Masters of all time, and whose Wicha has been inherited from some of the Greatest of the previous generation of Masters of Maha Sanaeh Magic. The full formula of Invocations for the Kata Akarn Sam Sip Sorng were performed, for reanimation of the spirit within the Prai Bone Powders. This is an essential part of Necromantic Empowerment with all Humanoid and Animal form amulets which are imbued with a resident spirit. 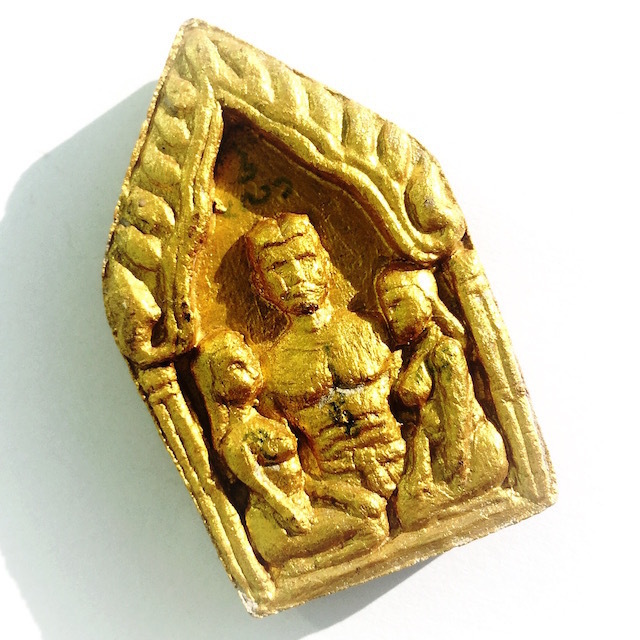 We are proud to be able to provide this amulet as one of the choice options in our store, for it is both powerful, collectible and a classic miniature Buddhist Art creation that is a valuable acquisition for any connoisseur of Pra Khun Phaen amulets with good taste, who knows a powerful amulet when he sees one.

Those who know Ajarn Meng's amulets already will need no convincing of the power of his amulets. We feel that this Khun Phaen reveals its charm and beauty to you on its own merits, without us having to say much in its favor. 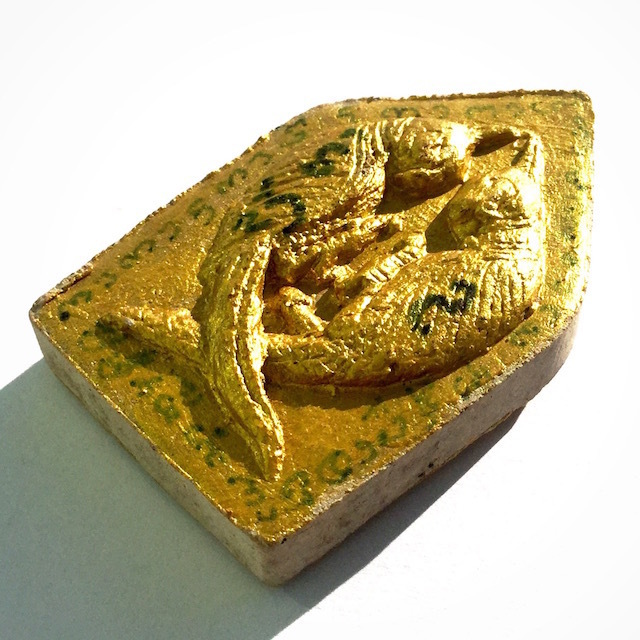 Ajarn Meng's amulets are revered and highly sought after by devotees in many countries all around the world. Ajarn Meng is a Loyal Devotee of Luang Por Guay Chudtintaro of Wat Kositaram and a faithful servant of Buddhism. 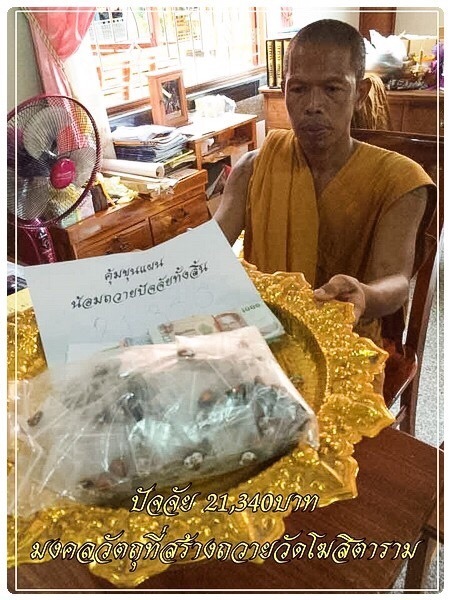 Above Pic; Amulets of Ajarn Meng donated for the temple of Wat Kositaram to distribute and keep the funds for their needs. Not only does Ajarn Meng donate money to temples, he also donates his famously popular amulets for the devotees. He donates funds to Wat Kositaram and his other preferred temples in line with the true reasons for all Ajarns to make and raise funds with amulets, namely, to preserve and promote the teachings of the Buddha, but helping to finance Buddhist Temple Projects. 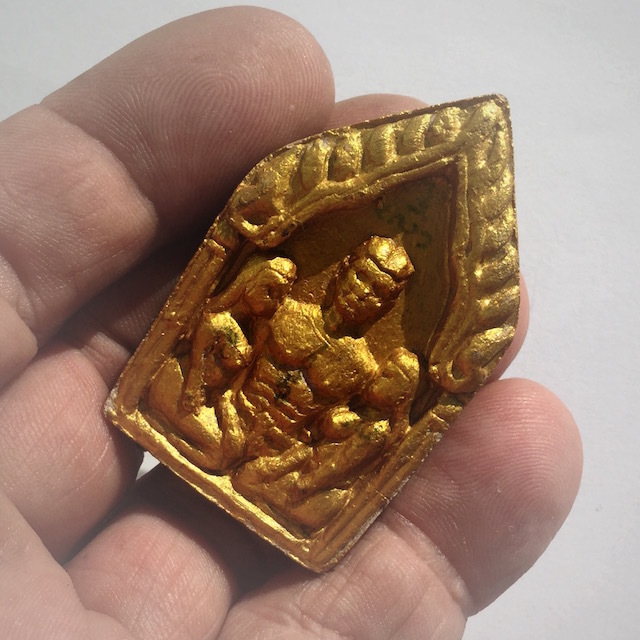 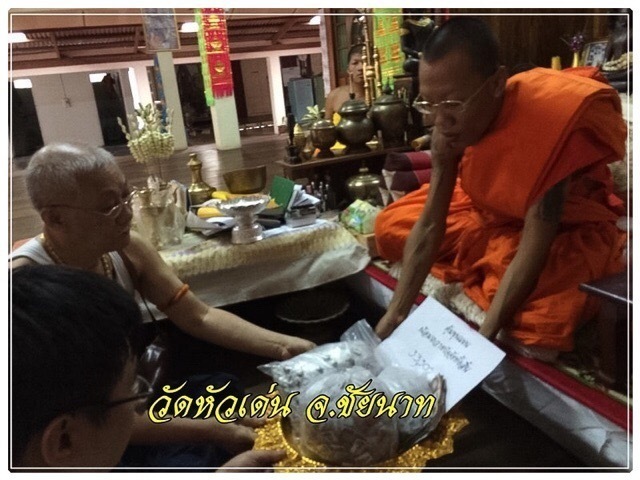 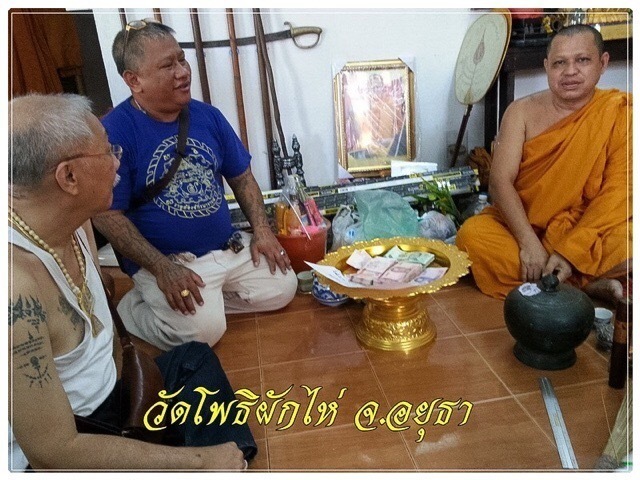 Above; Ajarn Meng donates money to the temple of Wat Po Pak Hai in Ayuttaya 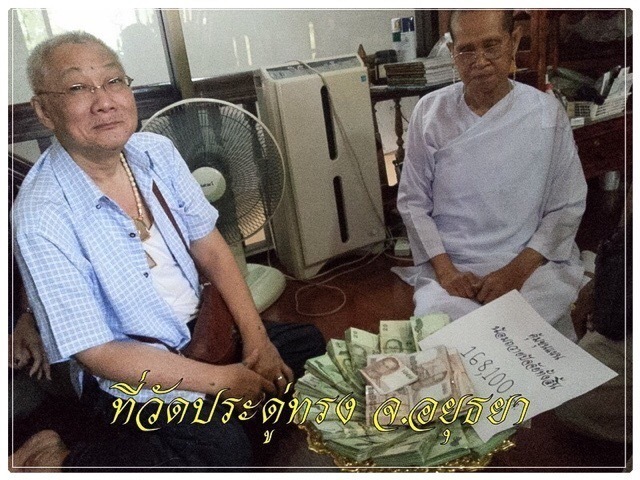 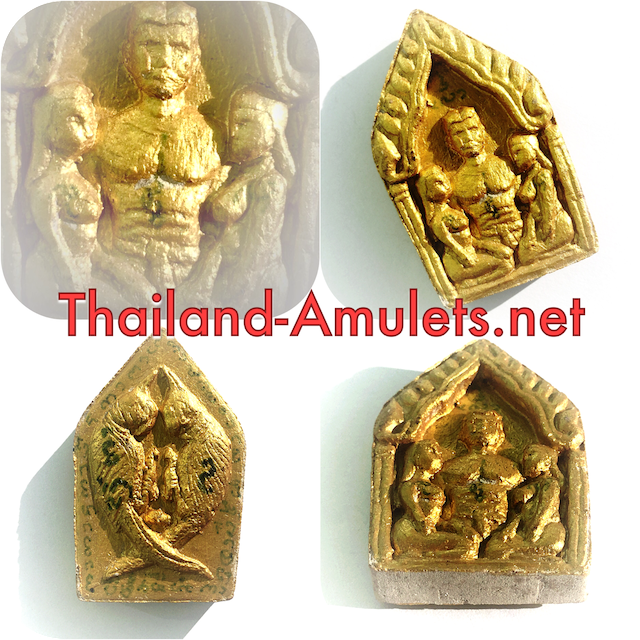