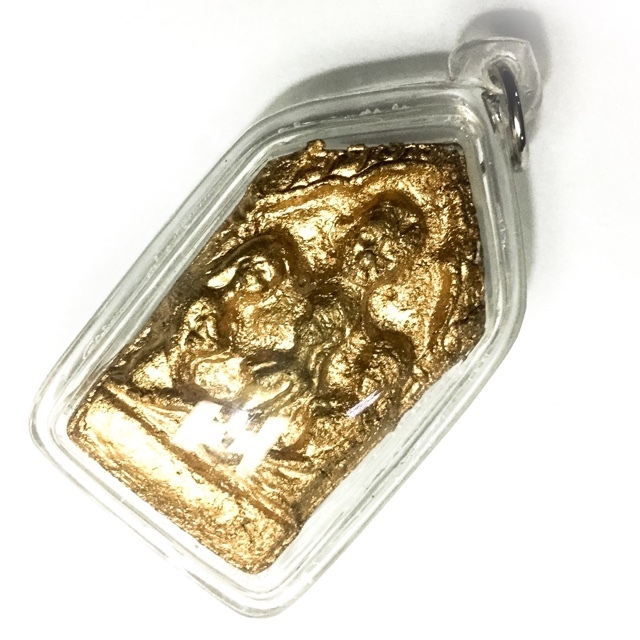 The highly popular Lay Master and Ruesi Ajarn Prodt, of the Samnak Phu Sanaeh Kobutra, has made the Pra Khun Phaen Nang Lorm in the image of Khun Phaen embracing a Harem of three beautiful maidens in entourage. The amulet is hand pressed from the purest concentrated Pra Maha Phuudt powders, which have been pressed into the form of Pra Khun Phaen, and then given a golden coating on the front face using bronze wanich. 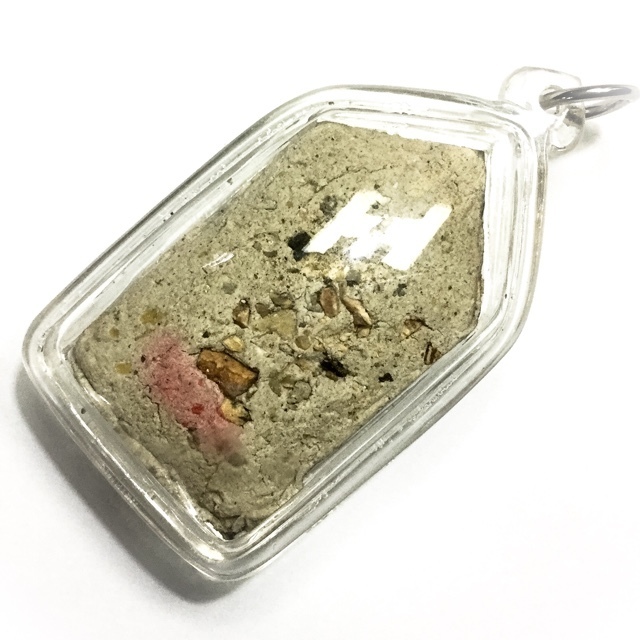 The Muan Sarn Sacred Powder rear face is left visible to the naked eye, revealing its coarse concentrated consistency of ground Necromantic bone powders, funereal earths and crematorium ashes, with a generous helping of mortal remains, and Chin Aathan bone fragments visible residing within the sacred Muan Sarn. The powerful necromantic Earths and Maha Laluay Sanaeh Powders combine the Ultra Powerful Seductive Influence of the Necromantic Ghost Bone (Chin Aathan), and the Immensely Convincing mercy Charm of the Pra Khun Phaen, to entice and seduce others in your favour.

This Pra Khun Phaen Nang Lorm is not only a powerful Wicha Maha Sanaeh through the Invocations of the Pra Khun Phaen Spell, but is in addition a Potent Necromantic Spell with the spirit of a Bhūta Ghost, inhabiting it, who watches over the well being and lucky fortunes of its owner. 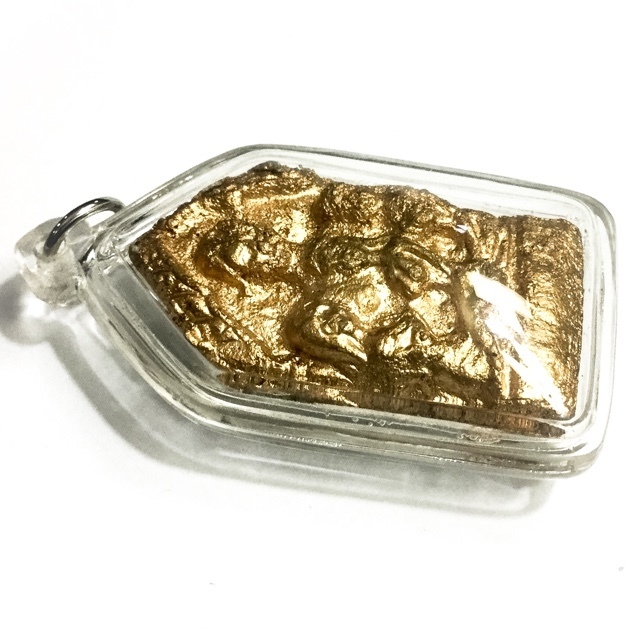 But the Wicha Maha Phuudt (Mahā Bhūtā Vidhyā), is in truth something much much deeper and subtle. The Wicha Maha Phuudt involes Elemental Magick, and is also part of reanimation and activation of the powers within material objects (in this case the amulet, and the bones within it). 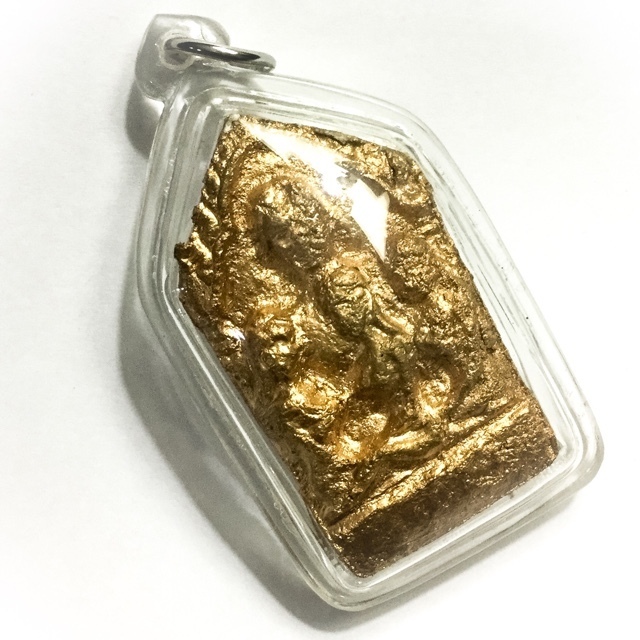 The Bhutas, spirits of defied heroes, of fierce and evil beings, of Hindu deities and of animals, etc., are wrongly referred to as "ghosts" or "demons" and, in fact, are protective and benevolent beings. Though it is true that they can cause harm in their violent forms, as they are extremely powerful, they can be pacified through worshipings or offerings referred to as Bhuta Aradhana. 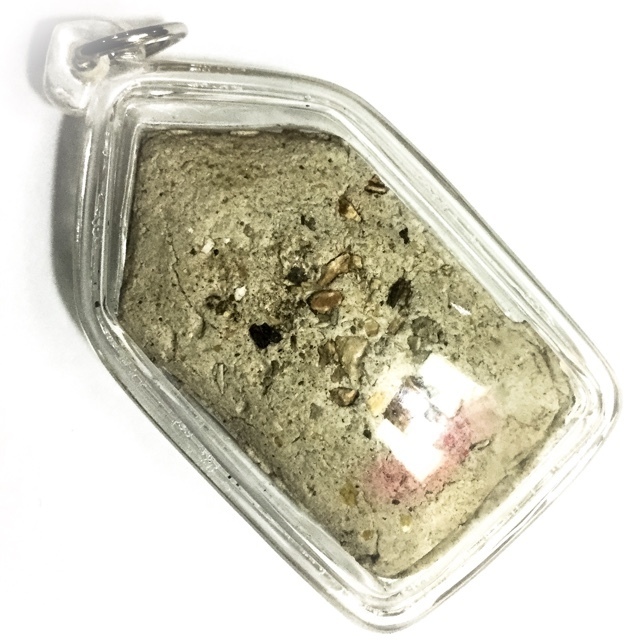 Below is a synopsis of the Mahā Būta;

Ether, Air, Fire, Water and Earth are condensations of the above described Primary Sensations. They represent the constituent forces that in various combinations make up the material substance of which physical objects are made. For example, that which gives solidity to an object, belongs to the Earth-Tattva. 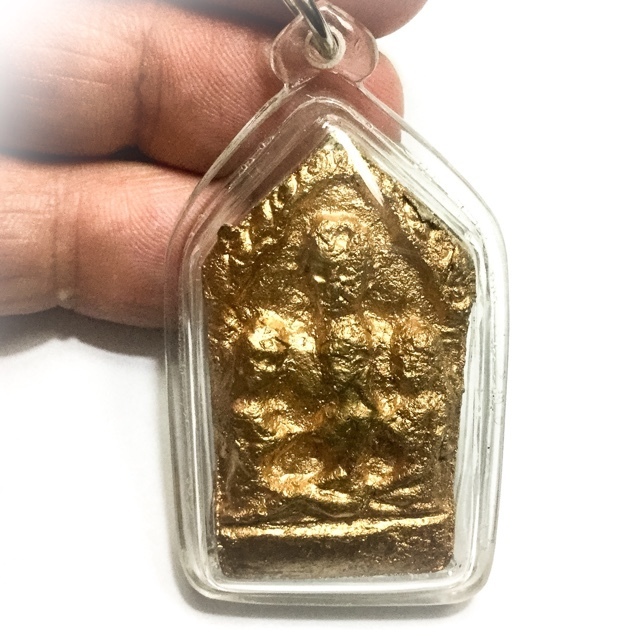 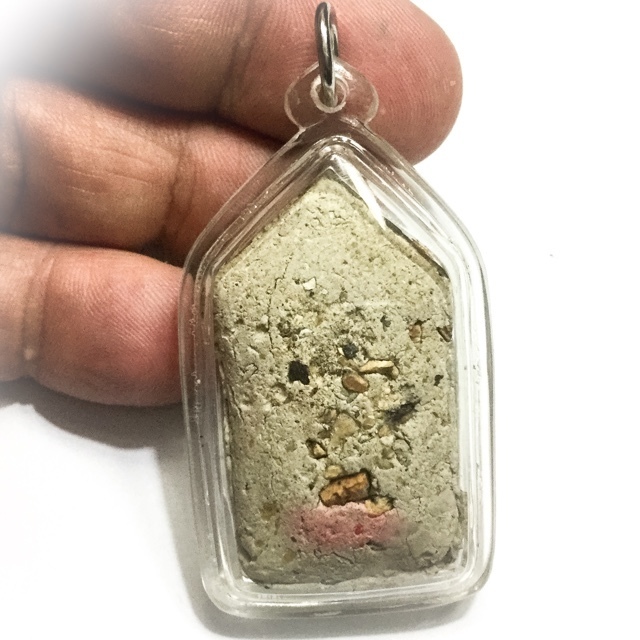 A Phuudt, or 'Maha Phuudt', is otherwise considered to be a supernatural creature, usually the ghost of a deceased person, in the popular culture, literature and some ancient texts of the Indian subcontinent.

Interpretations of how the Phuudt come into existence, vary by region and community, but they are usually considered to be perturbed and restless due to some factor that prevents them from moving on (to transmigration, non-being, nirvana, or heaven or hell, depending on tradition). 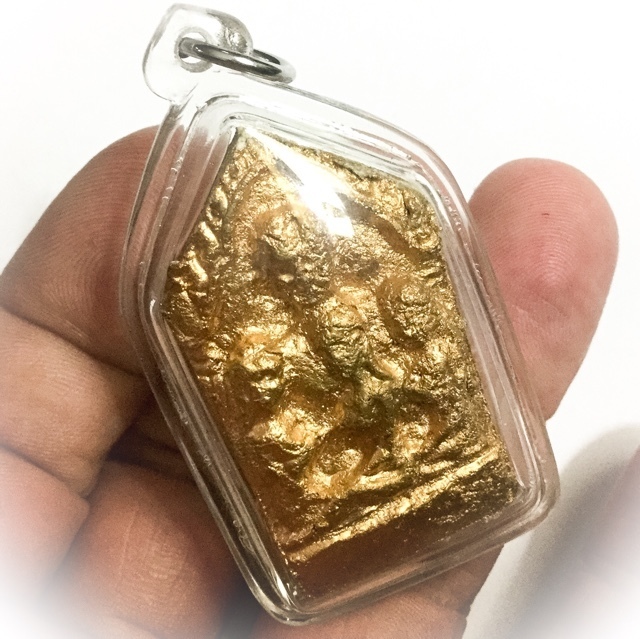 This could be a violent death, unsettled matters in their lives, or simply the failure of their survivors to perform proper funerals. Bhūta is a Sanskrit term that carries the connotations of "past" and "being" and, because it is descended from "one of the most wide-spread roots in Indo-European — namely, *bheu/*bhu-", has similar-sounding cognates in virtually every branch of that language family, e.g., Irish (bha), English (be), Latvian (but) and Persian (budan). 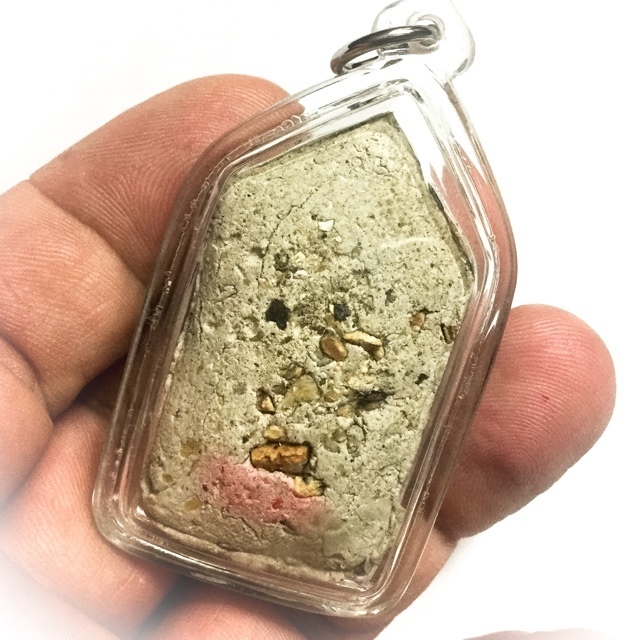 In Hindustani, Punjabi, Kashmiri, Bengali, Sindhi and other languages of the northern subcontinent, the concept of bhoots is extensively used in idiom. To be "ridden by the bhoot of something" (bhoot sawaar hona) means to take an obsessive interest in that thing or work unrelentingly towards that goal.

Conversely, to "dismount a bhoot" (bhoot utaarna) means to break through an obsession or see through a false belief that was previously dearly held. The word has also entered Javanese language of Indonesia through Sanskrit, it is pronounced Bhuto and generally refers to a malevolent spirit/demonic giant which haunts places, it also refers to the genre of evil giants in wayang stories such as Buto Cakil. Phuudt, or, 'Bhoots' are able to alter and assume forms of various animals at will, but are usually seen in human form. 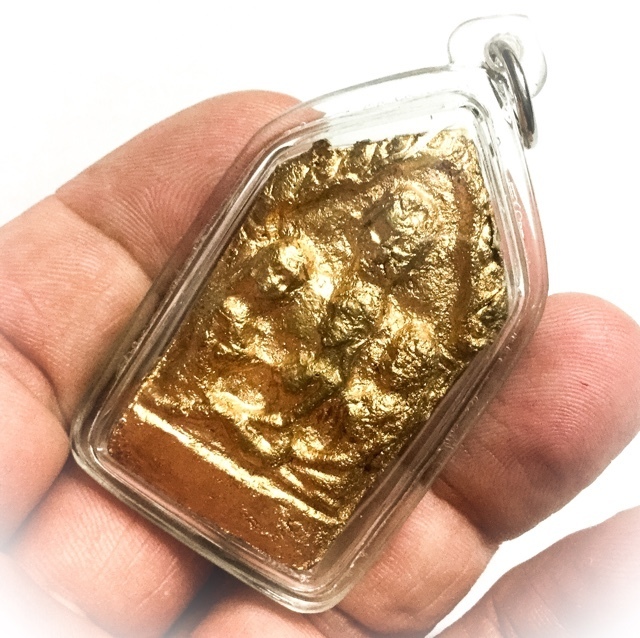 However, their feet often reveal them to be ghosts, as they are backwards facing. As the earth is regarded as sacred or semi-sacred in many traditions of the Indian subcontinent, bhoots go to lengths to avoid contact with it, often floating above it, either imperceptibly or up to a foot above. Bhoots cast no shadows, and speak with a nasal twang.

They often lurk on specific trees and prefer to appear in white clothing. Sometimes bhoots haunt specific houses (the so-called bhoot banglas, i.e. bhoot bungalows), which are typically places where they were killed or which have some other significance to the bhoot. Many ghost stories in the region combine these elements. For instance, they might involve a protagonist who fails to flee or take countermeasures when they run across a bhoot. 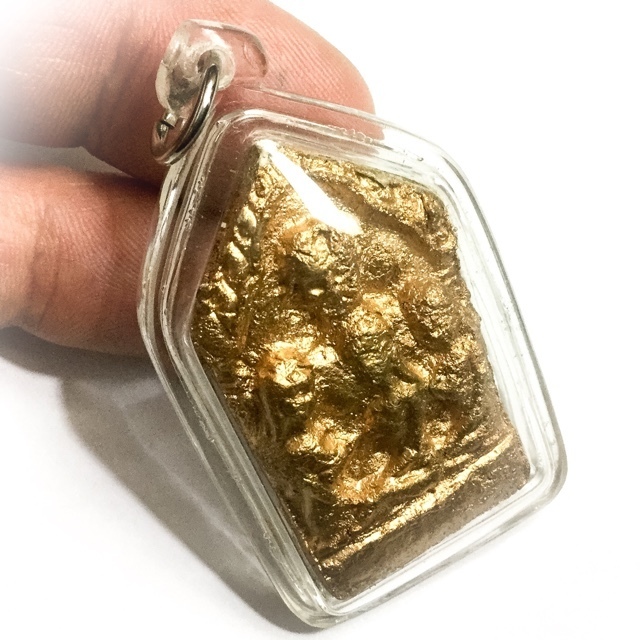 Instead, they unwittingly accept the bhoot's companionship (e.g., makes the ghost a companion as he/she walks through a forest, picks up the ghost in his car because it looks like an attractive woman waiting by the roadside at night).

They become progressively aware that their companion is dressed entirely in white and has a funnily nasal voice, before the horrifying realization dawns on them that their companion's feet are turned backwards, or he/she is not casting a shadow in the moonlight, or is walking without actually touching the ground. 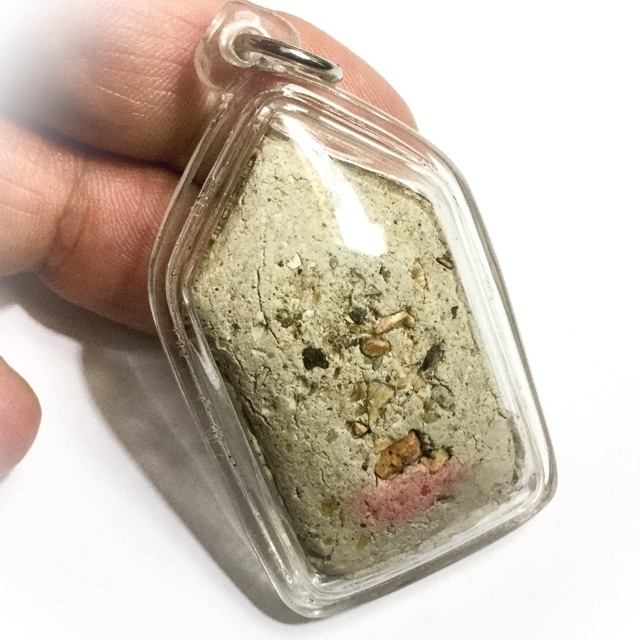 Bhoots are said to seek out milk and immerse themselves in it. Consuming bhoot-contaminated milk is considered a typical route for bhoot-possession of humans, which has also been a frequent plot element in bhoot stories.

This amulet is Empowered with the Invocations of the Akarn 32, Maha Phuudt, and the Kata Riak Taat See, Hnun Taat See, Pluk Taat See, the Nibbana Sutta, and the Summoning of the spirit of Khun Phaen, and the Wicha Paya Tae Krua.

A particular kind of Phuudt, that of a woman that died during pregnancy or childbirth, is known as a chudail (Dakini in Nepal and eastern India). Chudails look like human women, but their feet are turned backwards or other features are turned upside down. They can change their forms at any time. Chudails often try to lure young men at road crossings and fields or similar places. If a man is enamored of a chudail, it is believed that she will cause his death. There are, however, stories of people living with a chudail, or even marrying one. 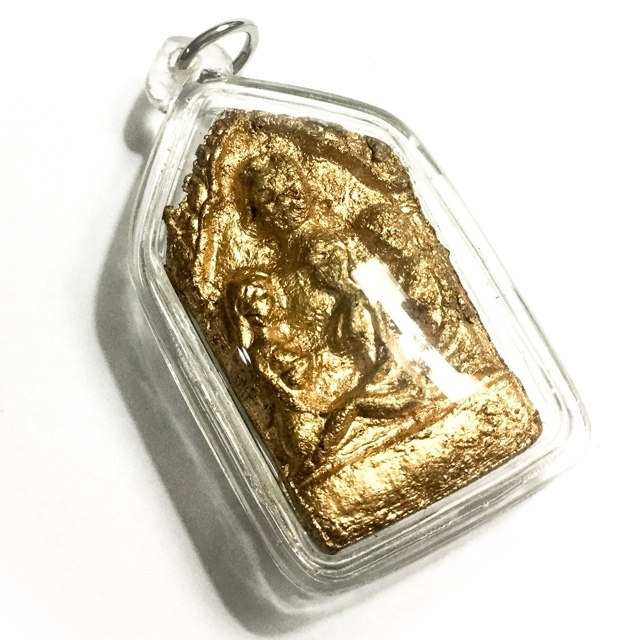 Academic Etymology of the word Bhūta

The 真如, i. e. bhūtatathatā, is the 體 corpus, or embodiment; the 本覺 is the 相 or form of primal intelligence; the former is the 理 or fundamental truth, the latter is the 智, i. e. the knowledge or wisdom of it; together they form the whole embodiment of the buddha-dharmakāya.

Bhūta-Tathatā (Sanskrit); Term used in Mahāyāna Buddhism to denote the inherent or true nature of phenomena. The term can mean either ‘true suchness’ or ‘the suchness of things’, and is commonly used to contrast the quintessential nature of phenomena with their external appearance. For example, according to the Madhyamaka school, the ‘true suchness’ of objects is emptiness (śūnyatā), whereas they appear to the unenlightened as solid, enduring, and possessed of an individual nature or ‘own being’ (svabhāva). Bhūta-tathatā is thus that which is ultimately real as opposed to the changing forms in which phenomena manifest themselves as they arise and pass away. 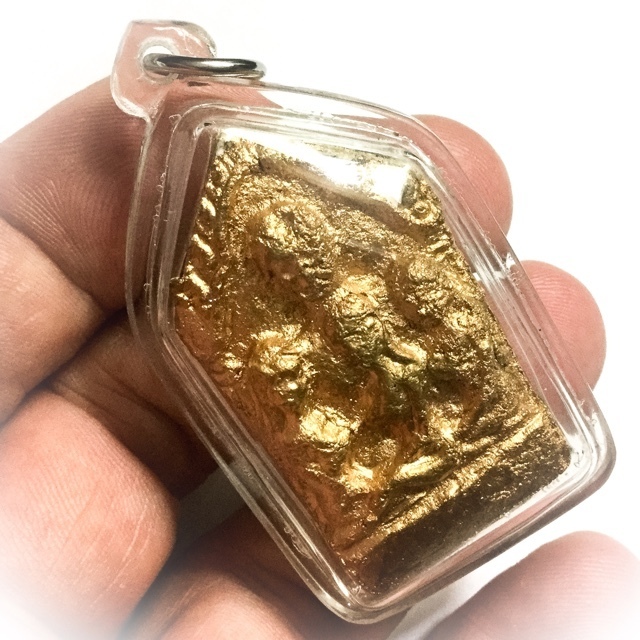 Ajarn Prodt is currently one of Thailand's most famous Lay Necromancers, and did have a large Samnak, but is now gone underground after coming into the Public Eye and being picked on by the local officials for practicing Sorcery. He prefers to return to keeping a low profile, and for this reason, is amulets have now become very rare to find, unless you have a direct line to Ajarn Prodt.

The Pra Khun Phaen Nang Lorm is empowered with the Magick of Pure Seduction, Mercy, Kama Sutra, with Blessings for Great Business Success.

Powerful Khmer Sorcery from Lay Sorceror and Lersi, Ajarn Prodt of the Samnak Phu Sanaeh Kobutra Ashram. Ajarn Prodt is a reclusive Hermit Sorceror, who focuses on using undiluted pure Muan Sarn Sacred Ingredients, and whose amulets are now the source of furor with Devotees around the world. 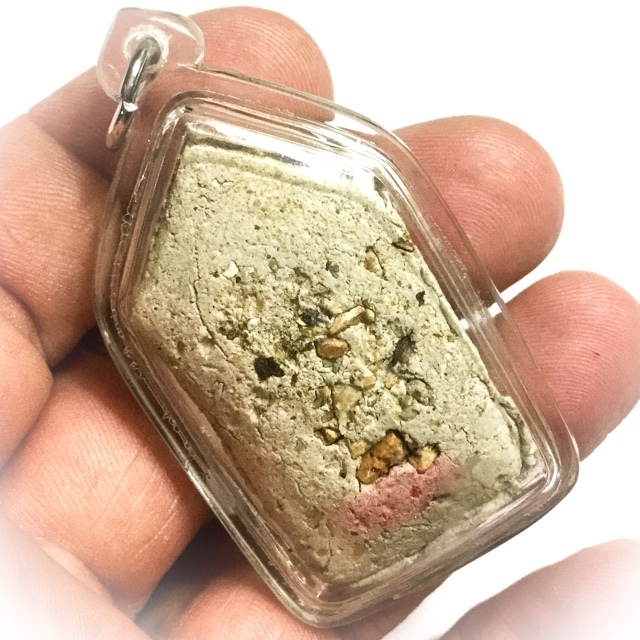 He adheres to the use of only the rarest and most powerful Muan Sarn, along with adherence to all the lengthy methods of empowerment, and Incantations, which are demanded by the Ancient Formulas of Occult Sorcery.

Remember, all amulets work from your collaboration and Bucha, and should be well cared for and nurtured, if you wish them to work well and with powerful effects. One should never expect to just neglect the amulet and expect it to work its Magick for us, and we should always be mindful to Bucha the amulet regularly as directed, to ensure the full power and benefits received. 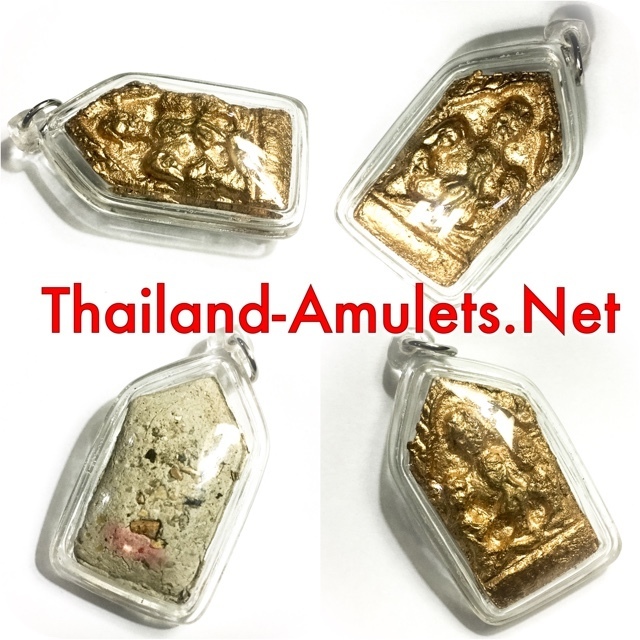 Then take the amulet and tap your forehead or the crown of your head before leaving the house each day. Being Necromantic Wicha, you can offer liquor and spicy foods if you wish, to increase the power of the spirit within the amulet.