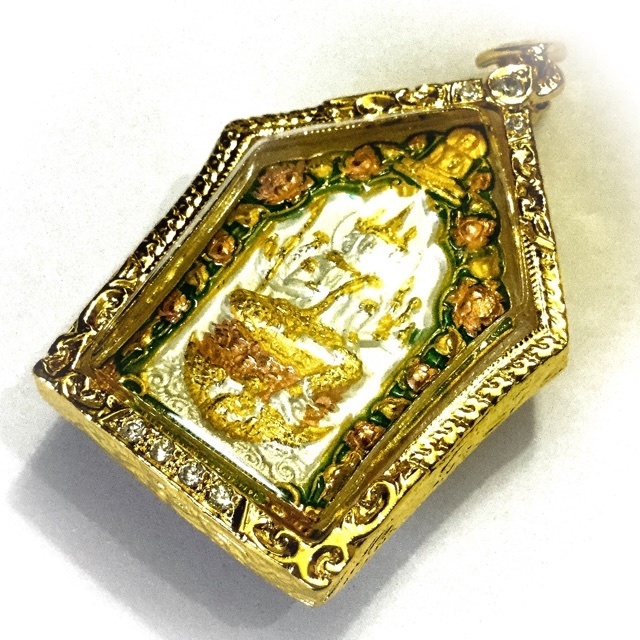 Any amulets or Bucha coming from the temple of Wat Pai Lom can be considered a National Favorite, Authentically Sacred, and of High Repute, as well as almost always being a beautiful piece of Buddhist Art, which is pure Puttaanussadti (remembrance of the Lord Buddha and his accomplishment).

The amulet was made in 2556 BE and released during Wai Kroo, along with a series of Sacred Payanak (Nāga Serpent King Deity) amulets, in Celebration of 101 years since the birth of Luang Por Poon. They were blessed in a major Putta Pisek (Buddha Abhiseka) ceremony at Wat Pai Lom. The remainder of amulets which did not get taken at the Wai Kroo were then placed in Kru Hiding Place for redistribution at a later date when the temple needed more funds to maintain the temple, or for new projects. 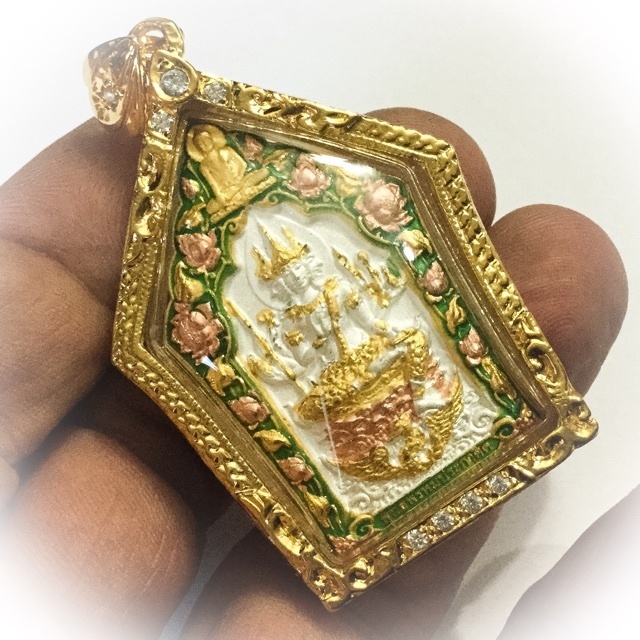 These amulets were then removed again in 2557 BE, to be included in the 'Dang Khlang Dee' edition, which was to raise funds to finish construction of the Vihara shrine to Luang Por Poon at Wat Pai Lom. These and any remaining Nāga amulets were then placed along with various other amulets from previous editions, to be blessed and re-released, including the posthumous release of some more Pra Khun Phaen Ruean Gaew amulets, from Luang Por Poon, from 2547 BE, and some Beautiful Taw Waes Suwan Asura Deva Lockets. 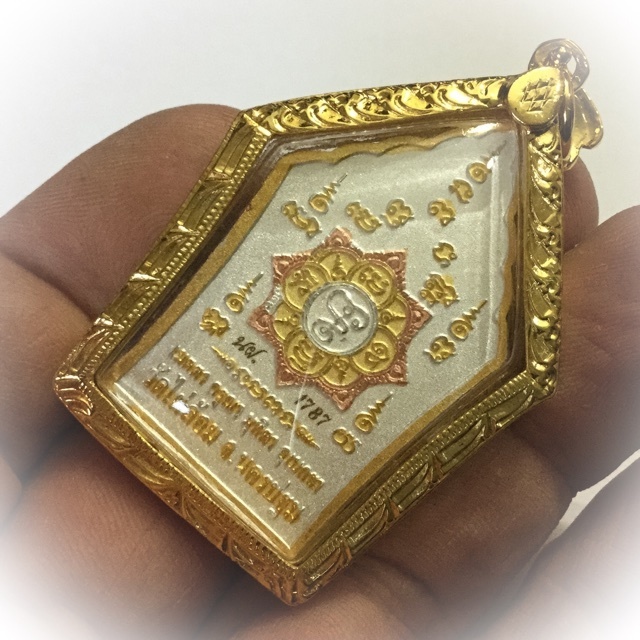 A sacred Yantra with Khom Agkhara lettering inscriptions of Pali sanskrit spells and Incantations is emblazoned on the rear face of the amulet, with the Yant enclosing a Sacred Na spell, with the Kata inscribed within the petals of the Lotus flower shaped Yantra "Mae Ga Ma U', which is the Kata Hua Jai Pra Mae Toranī (Dharani earth Goddess). 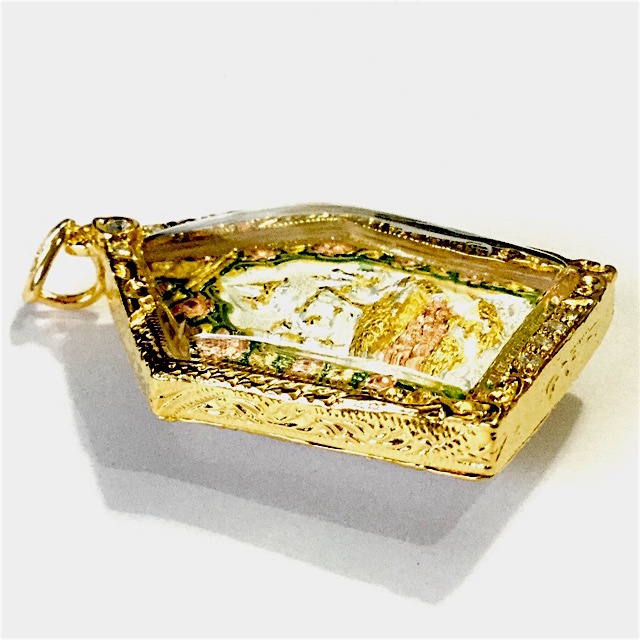 The Yantra is embellished with the Kata around it, spelling; 'Na Mō Put Tā Ya - Putta Maedtā - Na Ma Pa Ta', in Khom Agkhara. Beneath the Yant are the four brahma Viharas written in Thai; 'Maedtā Garunā Mutidtā Ubpaegkhā' (Mercy, Generosity, Helpful Intention, and Equanimity). These Kata of course attract worldly posessions and requisites, and invoke mercy, generosity, helfpfulness and equanimity from others towards you. 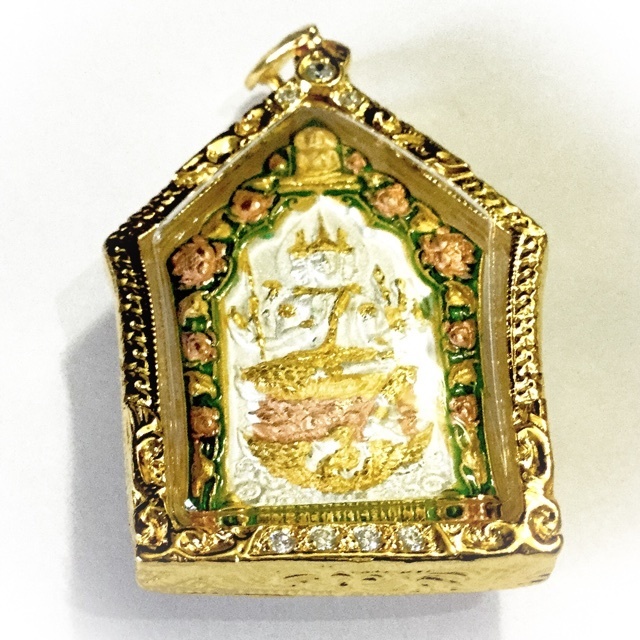 The new amulets ,along with ones coming from the older editions, were all then given a further double blessing ceremony over water, in addition to the original ceremonies performed with each edition.

The frot face of the amulet features the Lord Buddha in the Mara Vichai posture (Subduing Mara), touching the earth calling the Mae Toranī Earth Goddess to witness his achievements which were greater than those of the Mara. The Buddha is seated in the Highest Celestial realms above the Brahma God, who he also defeated in a mutual hide and seek contest, to prove that the Buddha's Merits were higher than those of the Brahma, despite the fact that the Brahma realm is the Highest heaven. The Brahma Worlds have as many Brahma Beings as there are grains of sand in the ocean, but only a few of them have high status above other Brahmas. The Brahma invoked within this amulet is the 4 faced Lord Brahma himself seated upon a Hongsa Swan, his ubiquitous steed.

The Brahma brings a multitude of blessings to the wearer, Blessings, Lucky Fortunes and Prosperity, Long Life, Good health, Safety from Danger and Evil, Happy Family and protection from Black Magic. Within the Hindu trinity of Brahma, Vishnu and Shiva, Brahma is the creator, Vishnu the preserver and Shiva the destroyer. Nevertheless, Brahma grew in a lotus out of the navel of the sleeping Vishnu. The daily alternation of light and dark is attributed to the activity of Brahma. Brahma’s mind born sons are the seers Marici, Atri, Angiras, Pulastya, Pulaha, Kratuj, Pracetas, Vashishta, Bhrgu and Narada. From Brahma’s body came his nine sons Daksa, Dharma, Kama, Anger, Greed, Delusion (Maya), Lust, Joy, Death and Bharata and one daughter called Angaja. 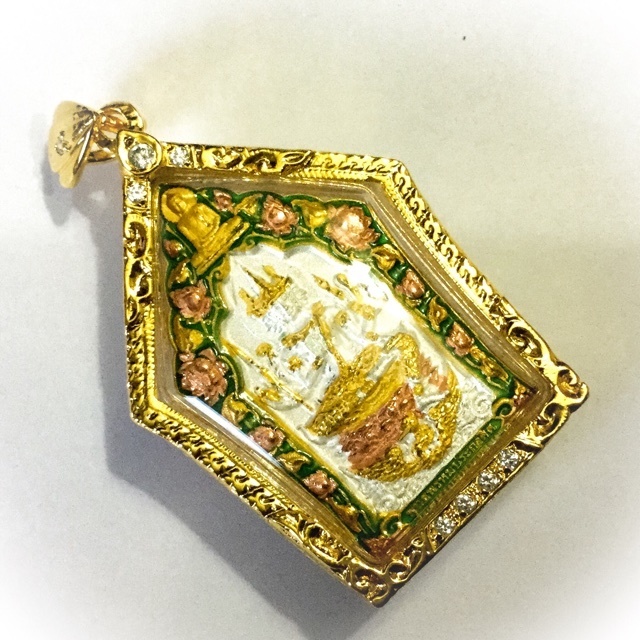 In order to create the world and produce the human race, Brahma made a goddess out of himself. One half was woman and the other half was man. Brahma called the woman Gayatri, but she also became known by many other names such as Saraswati. Brahma has four heads, but used to have five. The four extra heads appeared when Gayatri was very ashamed with Brahma’s love for her and tried to escape from his gaze. The tremendous tapas that Brahma had practiced for the purpose of creation was entirely annihilated through his desire to unite with his daughter. One head was lost later when Brahma lied to Vishnu and thus caused Shiva to become very angry. The four Veda’s are said to have sprung from his heads. In the Life of Ganga, Brahma advised Bhagiratha to ask the help of Shiva in containing the power of Ganga (goddess of the Ganges river). 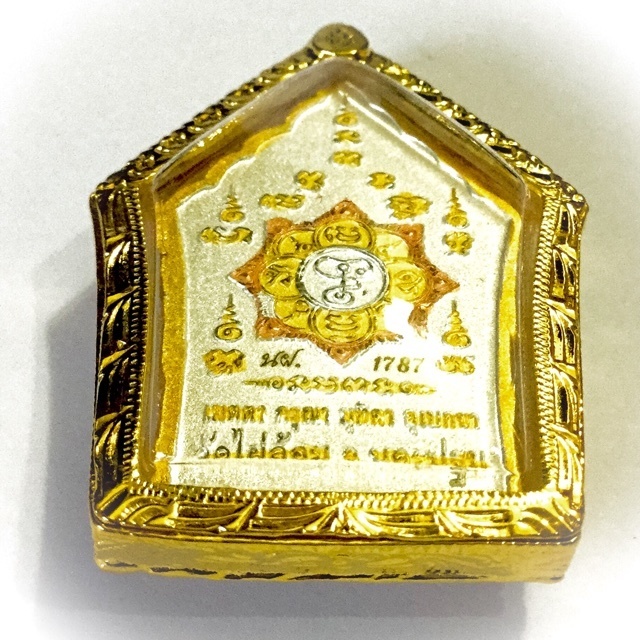 The first blessing was the 2556 BE Wai Kroo and Korn Kroo ceremony at Wat Pai Lom to and celebrate in addition, 101 years since the birth of Luang Por Poon. The amulets were then empowered again on Saturday the 5th April 2557 at the mouth of the Thai Mekhong river on a raft in the middle of the river, in front of the temple of Wat Ahong Sila in Hor Kam, Beung Garn Province. The great Naga Kings of Bodhala were invoked from the depths of the underworld, which is believed to have a portal to it beneath the Mekong river, and beseeched to assist in bestowing their blessings and powers upon the amulets of this series. 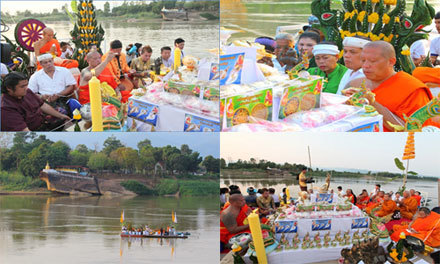 Luang Por Siri, and Luang Pi Nam Fon (Abbot of Wat Pai Lom) performed the empowerments and prayers, after a Brahman master of ceremonies had performed the invitation of the Devas to attend the Dhamma, and assist in blessing the amulets. 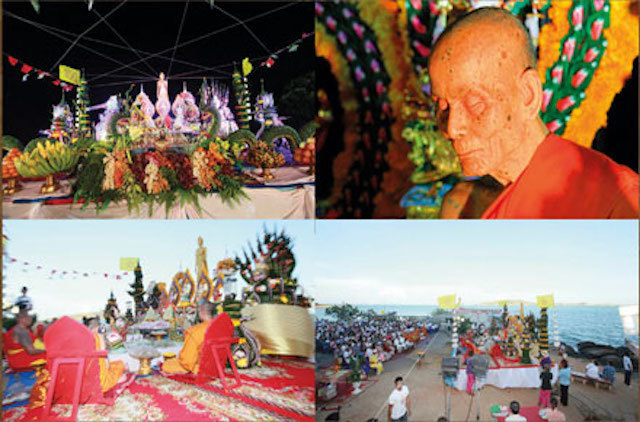 The second blessing was held on Sunday the 27th April, at the Gon Ao Bay Area, of the National Park of Khao Laem Ya in Pae Municipality, in Rayong, to call the Nagas up from under the waters. The ceremony was performed on a large boat on the water. Luang Por Siri and Luang Pi Nam Fon performed the Empowerment once more, making this the third blessing for the Putta Prohm and Naga Amulets, and the second blessing for the 2557 BE new amulets included with this edition.

The third 2557 BE blessing (but indeed, the fourth blessing for these Putta Prohm amulets, when including the 2556 BE Wai Kroo), was held at Wat Pai Lom on Saturday the 8th May 2557 BE. 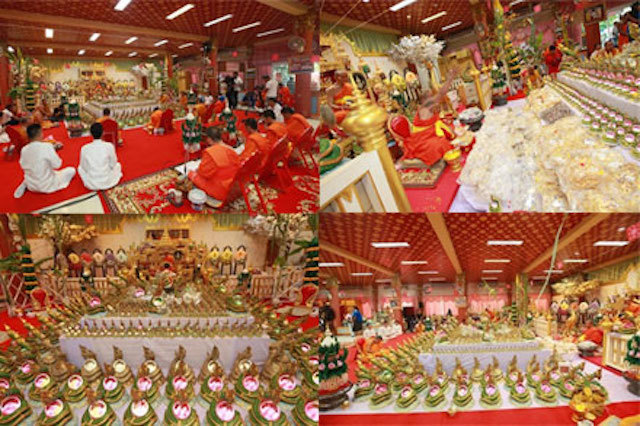 Wat Pai Lom was the temple of the Great Luang Por Poon, whose presence is always invoked to empower and bless all subsequent editions of this temple posthumously,for which it is necessary for devotees to know of this Kroo Ba Ajarn and to revere him when performing Bucha to amulets from Wat Pai Lom, regardless of whether they were made during or after Luang Por Poon's lifetime. 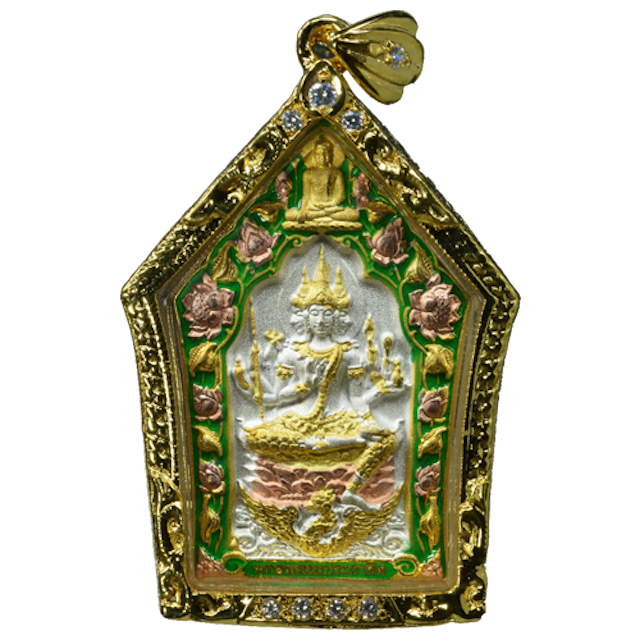 This is also the case with the temple of Luang Phu Tuad at Wat Chang Hai, who invoke the Bodhisattva to come and empower all editions of is amulets, and this invoking of the Guru is part of what Thai Buddhists believe to be the source of power behind the amulet. Luang Por Poon is considered one of Thailands greatest Master Monks of all time, he was famous for his great stillness and quality of not speaking much unless it was something which was important. 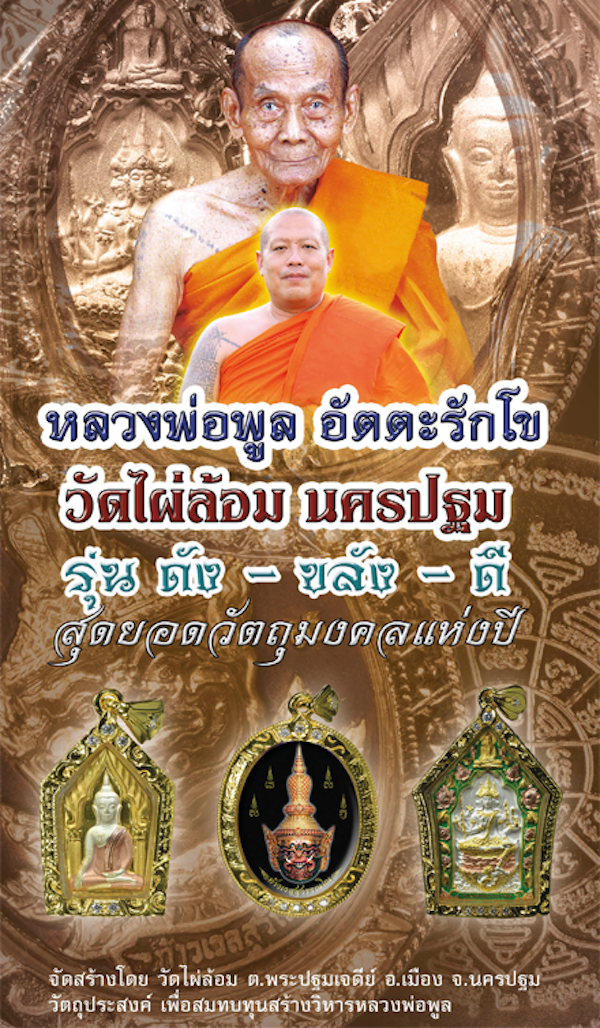 Luang Por Poon's amulets are known not only for the effectiveness of their magic, but also for the fact that the amulets are alwasy made with a very high grade of design quality and finish. They are thus not only sacred items of reverence, they are also wonderful examples of Buddhist Miniature Fine Art. 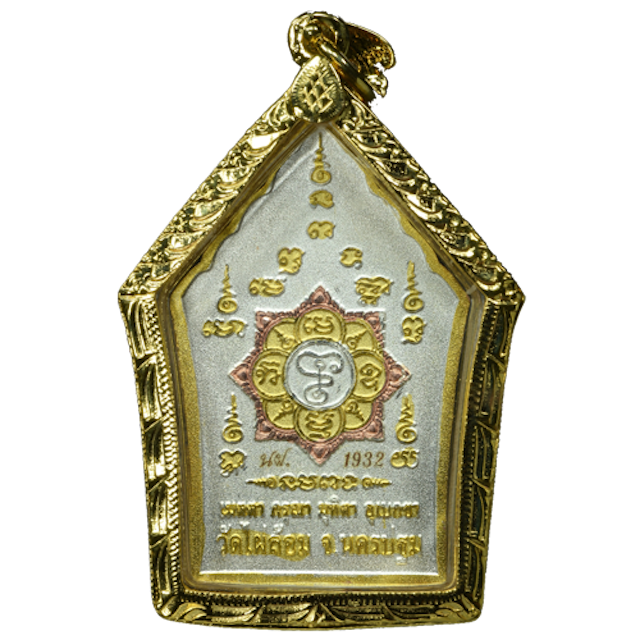 Luang Por Poon was renowned for his Purity of Practice, & for his four qualities of Brahmacarya; Mettā(Loving Kindess), Garunā (Generosity) Mutidtā the wish to help other Beings), and Ubpaegkhā (Equanimity). This is of course one of the signs of Bodhisattvas and Arahants, and reveals the highly attained practice of Luang Por Poon. 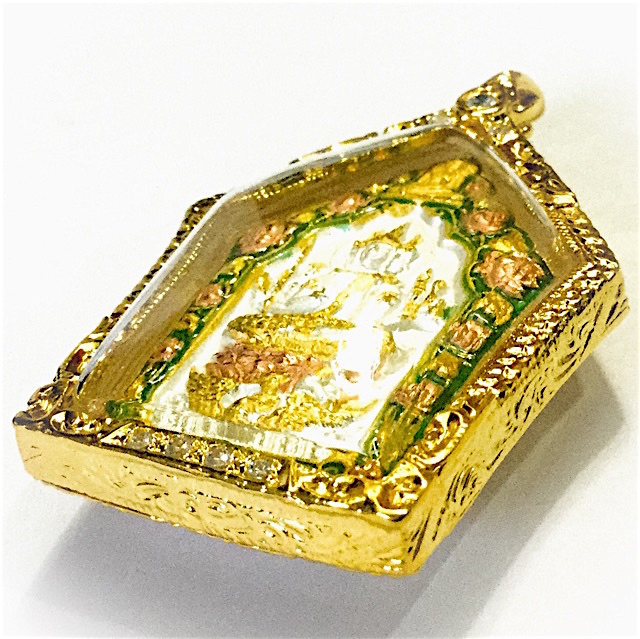 Luang Por Poon recieved his magical training in Kata Akom from various Masters, including LP Jom, LP Glan, LP Chem and LP Ngern. Wat Pai Lom is thought to have been built during the Ayutthaya period, i.e. long before the founding of Bangkok. Its name means "Bamboo surrounded Temple" and was chosen, either because the first temple buildings were made of bamboo, or because of the dense bamboo forest, which once surrounded the temple grounds. 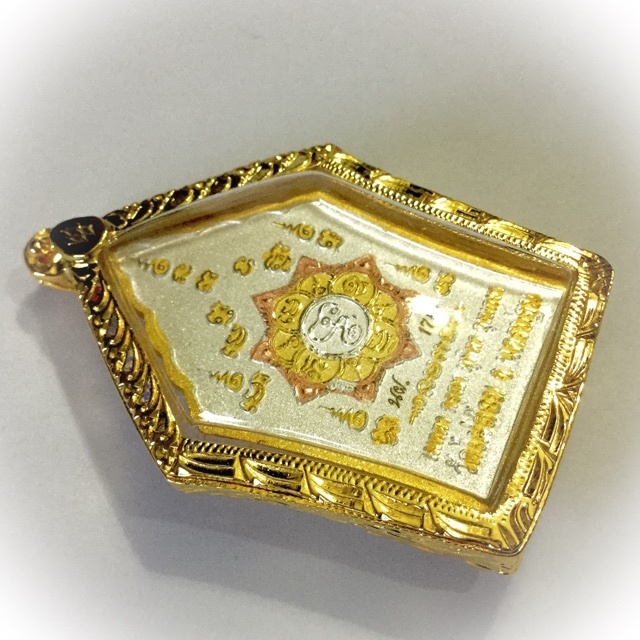 Luang Por Poon's amulets and Bucha items were always renowned for their great beauty and Majestic Aura. The amulets of Luang Por Poon are cnsidered 'Puttasin Praneet' (Fine Miniature Buddhist Artworks) and aree deliberately designed to preserve and inspire the continuation of high standards of Buddhist Sacred Art. Luang Por Poon is one of Thailand's most revered Monks of this Century and one of the Most famous names of the last 3 decades of amulet history. The echoes of his passing is still felt by his Devotees, and the pain of his absence is only softened by the comfort given by his amulets, and his Sacred memory. 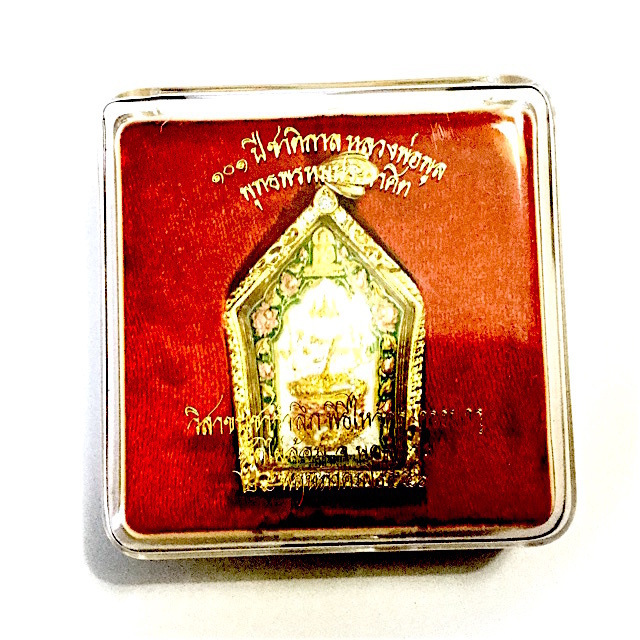 This in turn, also preserves the future value of such amulets, which due to their high quality and eternal beauty, will never fall out of popularity, nor lose their sacred value. In fact, amulets from Wat pai Lom can only increase in sacredness and also worldly valueas time passes, making them a sound investment for a lifetime of use, and even to leave as inheritance 'heirloom amulets' to one's children, and children's children. 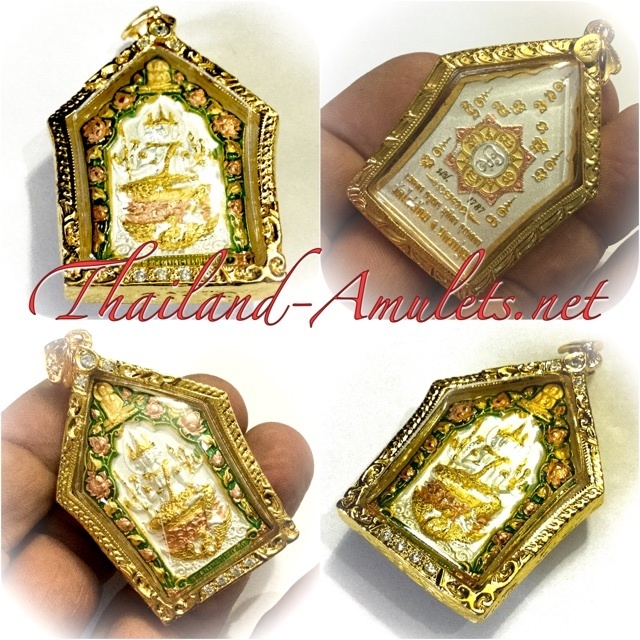