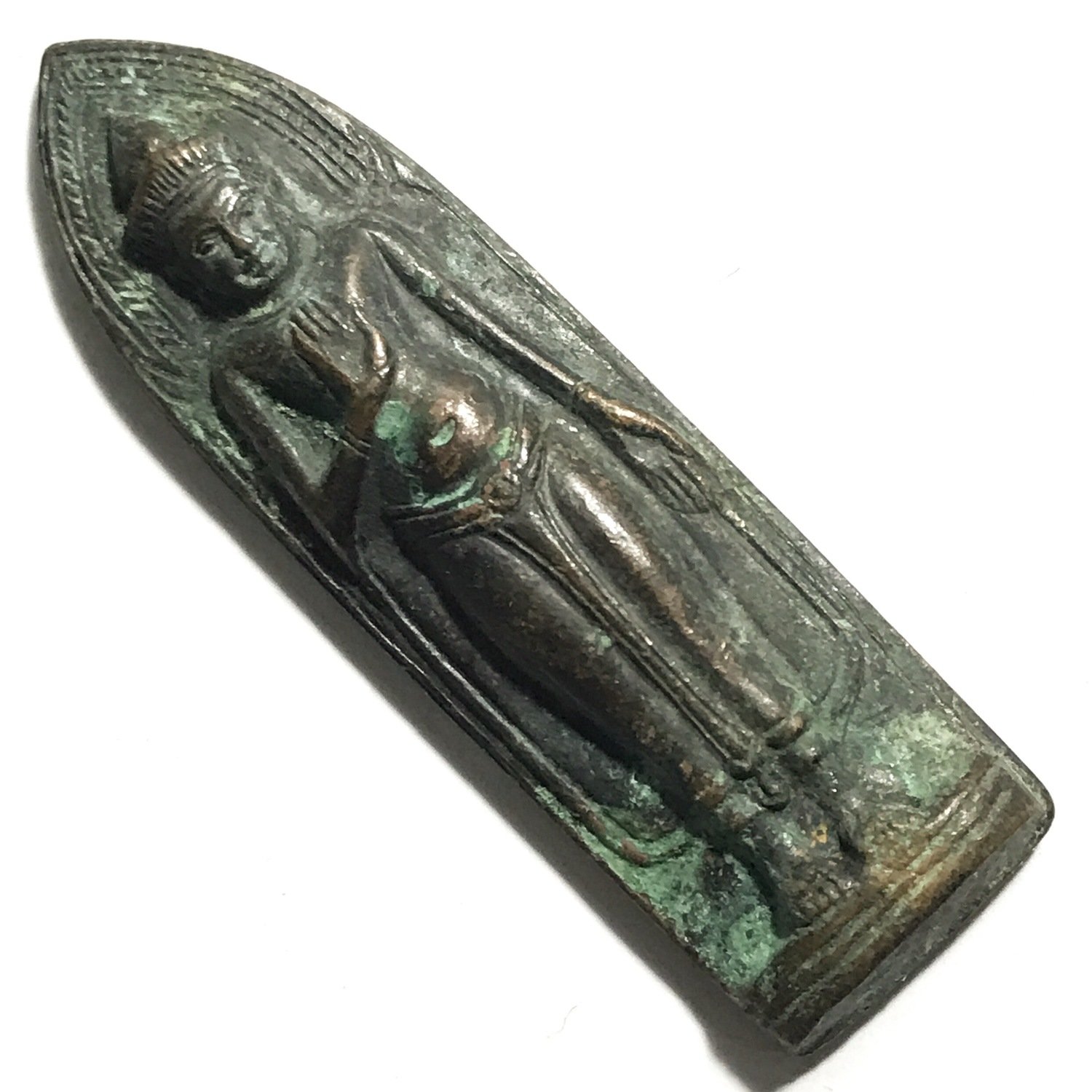 The amulet is made from Nuea Tong Daeng (Sacred Artifact and Copper Yantra Foil Metals). Released in a great Buddha Ahiseka Ceremony of National Historic Importance, initiated by Her Majesty the Queen and Royal Princess, with Ajarn Chum Chai Kiree of the Dtamnak Dtak Sila Khao Or Southern Academy of Sorcery performing the Brahman Laymaster Invocation of the Devas,. The Ceremony was held at Wat Pratat Doi Sutep in Chiang Mai, in the year 2515 BE. The Amulets were Blessed in the Ceremony by 108 Master Monks from around the country.

The Pra Ruang Pratat Chedi amulet is styled in the Periodic Artistic Style of Khmer Influence of the Lopburi Era, with the Buddha wearing a Khmer style Crown as seen by the Rulers of the Lopburi Era Kingdom. The Budda is wearing a fully wrapped Civara robe with immensely detailed regalia. The face of the Buddha is clearly of Khmer artistic influence, and highly defined in its details. The amulet is considered a masterpiece of Miniature Buddhist Art. 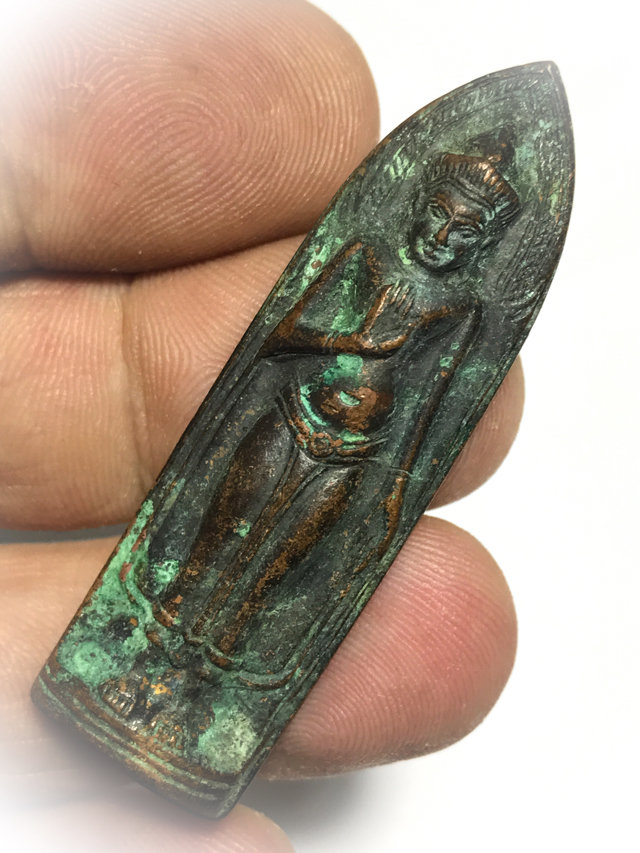 The Pra Ruang Rang Pern was first empowered in a Historically Important and Officially Documented Putta Pisek ceremony at Wat Doi Sutep, with the Great Honorable Presence of the Great Arahant Luang Por Kasem Khemago, to Give Blessings and Empowerment. to the Edition 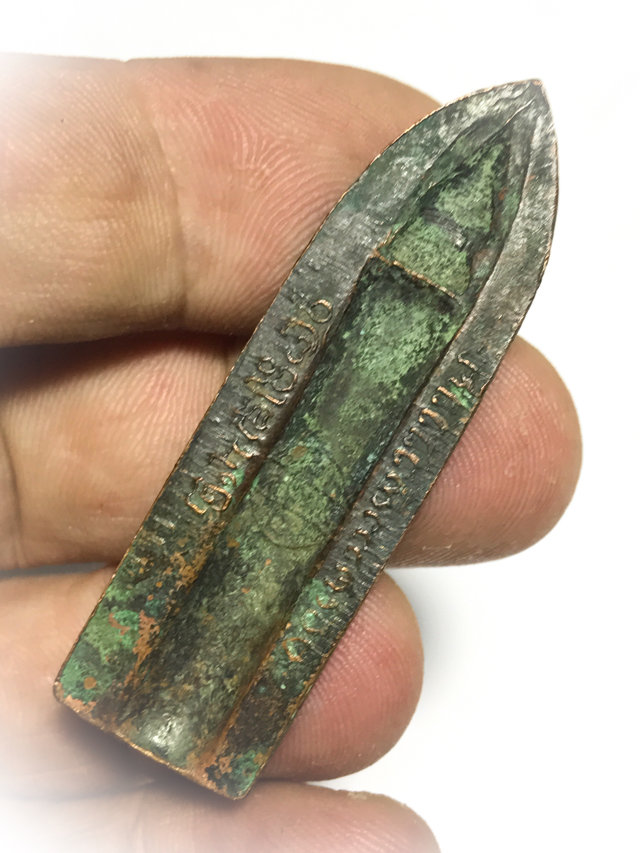 This amulet was one of a number which were taken by Ajarn Chum Chai Kiree after the ceremony, and enpowered further by Ajarn Chum for a period of another 7 Years. He then took the amulets and reblessed them once more in a Grand Buddha Abhiseka Ceremony with Master Monks at the temple of Wat Chumpol Nikayaram, in Ayuttaya, on the 7th July 2522 BE.

This edition is hence very special and rare, for the fact that it is not just the already amazingly Sacred 2515 BE Wat Pratat Doi Sutep Amulet, rather, has also been empowered by Ajarn Chum Chai Kiree for an extra 7 years, and then been Blessed once more with Great Master Monks at the temple of Wat Chumpol Nikayaram, to put the 'cream on the top of the cake'. 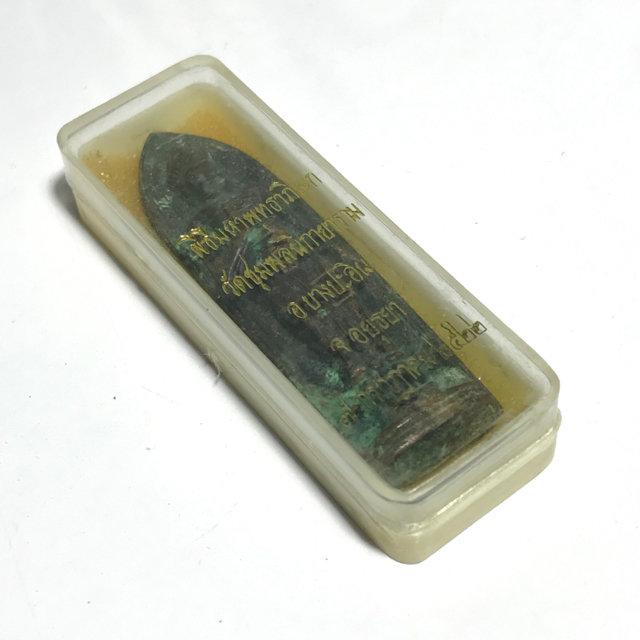 What more could a devotee of Buddhist Amulets look for, than an amulet of this calibre, with blessings and empowerments from the great Ajarn Chum Chai Kiree of the Dtamnak Dtak Sila Khao Or Southern Academy of Sorcery, and Blessed in Puttapisek by some of the Era's Greatest Practitioners, including Luang Phu To (Wat Pradoo Chimplee), the Great Arahant Luang Por Kasem Khemago (Sussaan Trailaks in Lampang), Ajarn Nam Gaew Jantr, LP Hwaen (Sujino), Kroo Ba Chum Kroo Ba Kam Saen, and the inimitable Luang Por Guay, of Wat Kositaram? 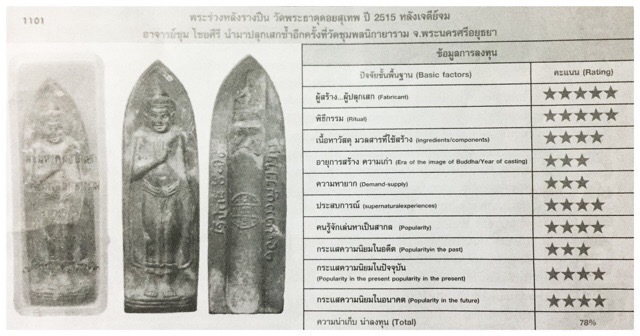 The Devotees of All of these Great Masters both highly revere, and Seek this amulet extremely because of his Personal Involvement in the empowerment ceremony, and this in itself makes the amulet an ever rarer to find amulet. It is also a highly favored amulet with members of the Military, and the Police force, for its Kong Grapan Chadtri and Klaew Klaad, Serm Yos status increase, and Maha Amnaj Commanding Power to Influence Minions. 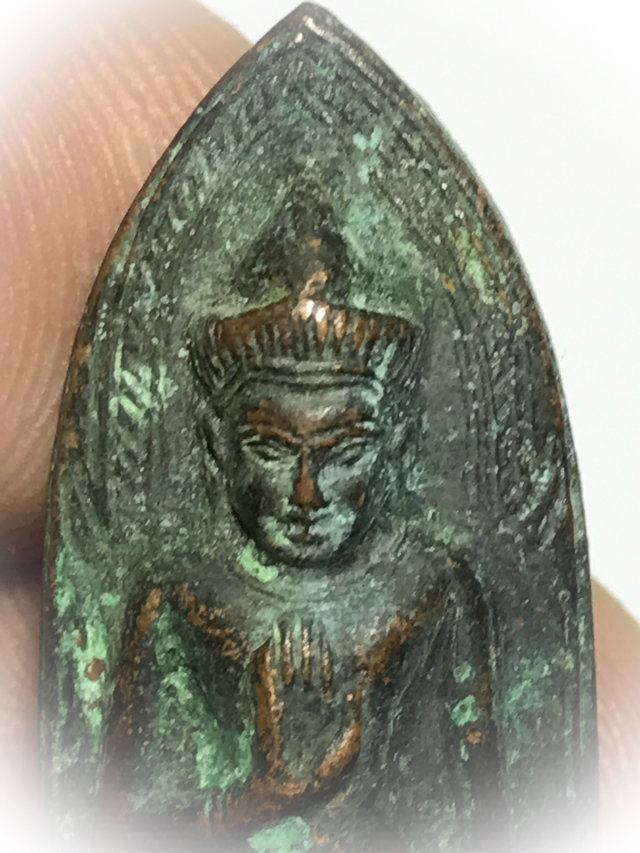 Amulets blessed by Luang Por Guay are now becoming so rare and ever increasing in price, that any editions which he was involved with are becoming highly sought after. The presence of Luang Por Kasem is in itself another factor which makes this amulet a highly faith instilling Buddhist Artifact.

In addition, the Powerful Magic of Luang Phu To of Wat Pradoo Chimplee being bestowed upon this All Time Eternal Classic Buddhist Amulet, makes it Undoubtably a Best Choice for any and every Buddhist. The Devotees of the Lanna Olden Days Masters Kroo Ba Kam Saen, and Kroo Ba Chum, are also included in the many groups of collectors of this amulet. 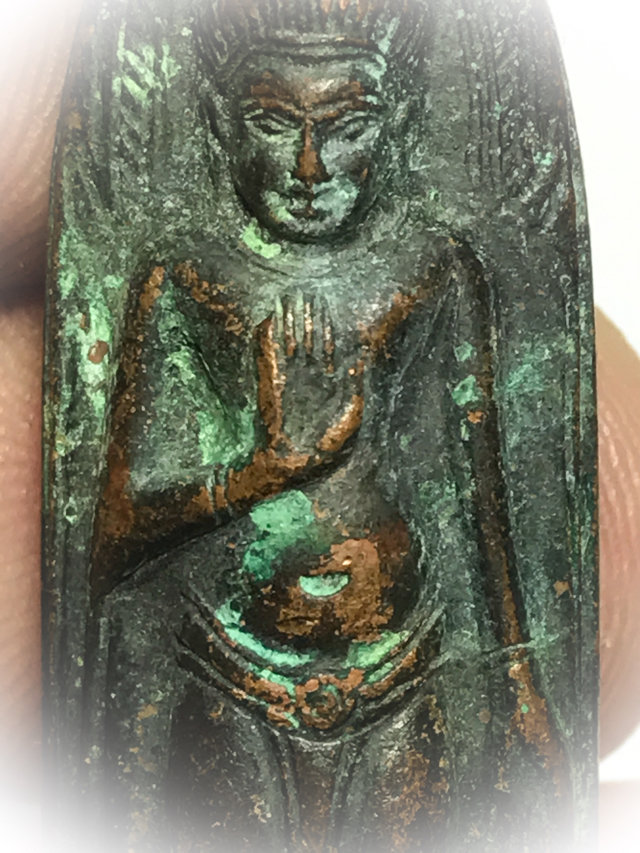 This Fine Example of this Classic and Ultra Collectible Amulet from Wat Doi Sutep in Chiang Mai has the green malachite stains on it which is only found in the examples which were kept for the seven year period of empowerment by Ajarn Chum Chai Kiree of the Dtamnak Dtak Sila Khao Or Southern Academy of Sorcery, due to his keeping them in Kru Chamber for charging up with power. This edition hence, has a more aged look than the amulets which were released directly after the first Ceremony at Wat Pratat Doi Sutep. 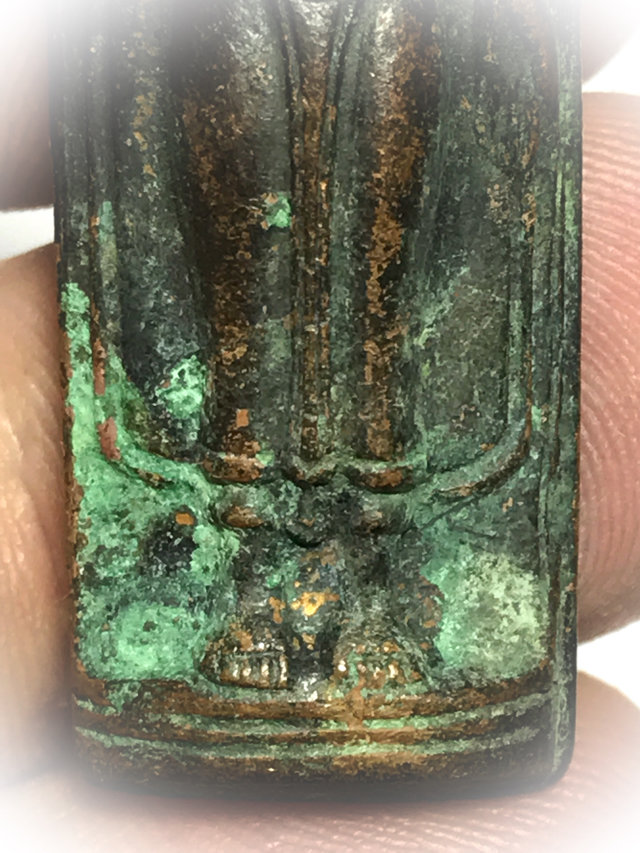 The rear face shows the indented concave Chedi Stupa, making this a 'Dtua Mia' Female model. The other version, is called 'Chedi Noon' means 'Bulging' and 'Dtua Phu' means 'Male' This refers to the fact that, if the Chedi is bulging out as a convex form, it is called male, and the inwards receding concave version, is the 'Dtua Mia', Female version. 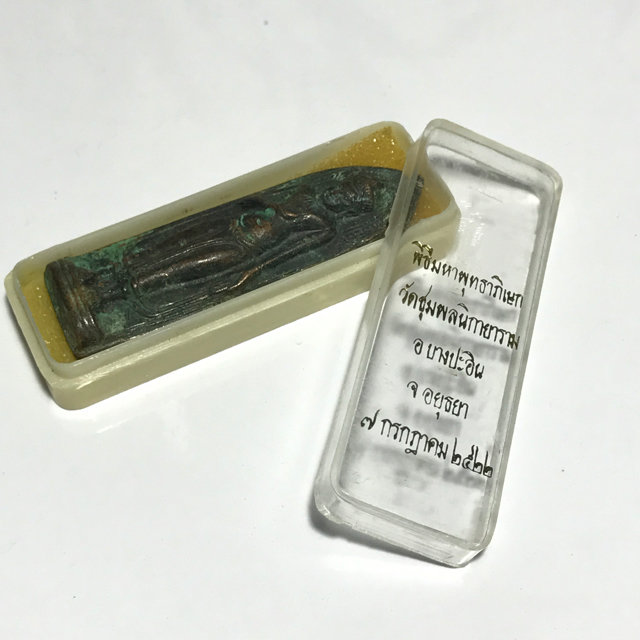 Comes with original box from the last ceremony was performed, and it was thereafter released at Wat Chumpol Nikayaram in 2522 BE. 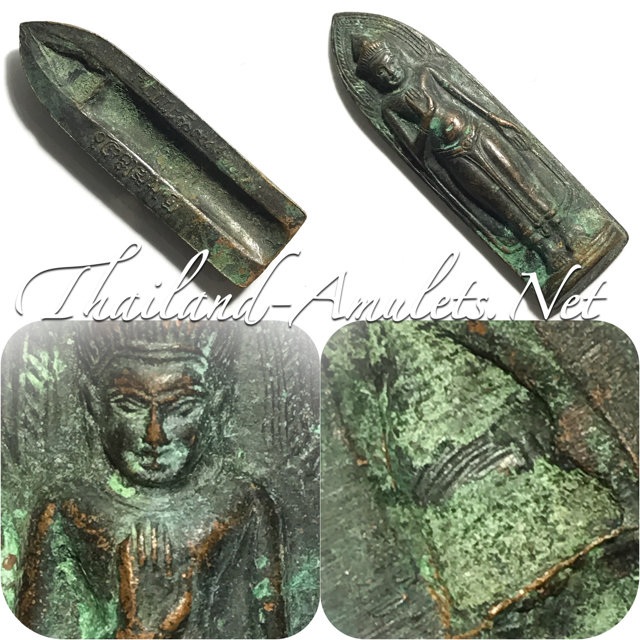