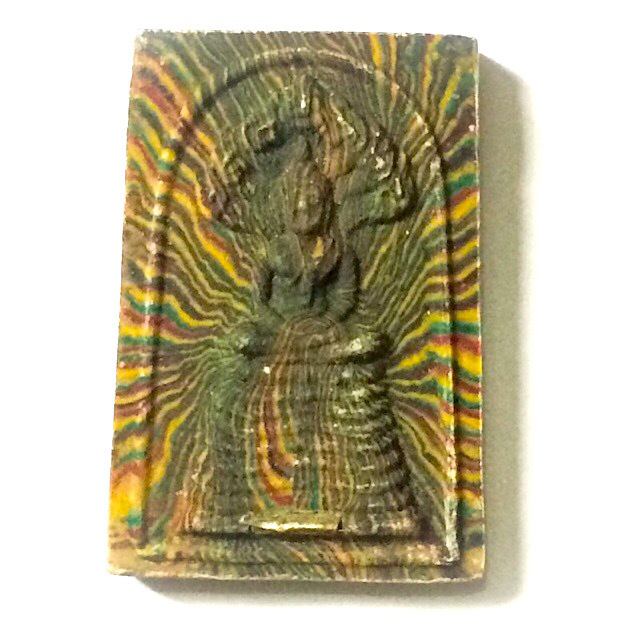 The Pra Somdej Gao Chan PIm Pra Nakprok, is a Classic and now very rare amulet from the 91st Birthday Celebration Edition, which was made in reverence to the Great Luang Por Pae, and blessed by the Great Deceased Master. A most classic and pristine example of Luang Por Pae's 91st Year. Made and Released in early 2539 as more or less the very last edition of amulets blessed in person by Luang Por Pae, before his illness in 2541 BE, which continued until his passing in 2542 BE.

The Pra Somdej Nakprok is made from as Herbal powder mixture with Pong Puttakun, Dork Pikul Flower, and a host of Sacred Muan sarn Powders, whose different colors were mixed into the Muan Sarn, to create a Rainbow effect. The bottom tier of the Dais of the Naga Throne on which the Buddha is sitting in Meditation, has a Takrut spell inserted, with Buddhist Blessings. The Pra Nakprok Buddha is sitting on Naga Throne of 9 Tiered Dais, with 7 headed Naga Canopy providing shade from the rain in his meditation. 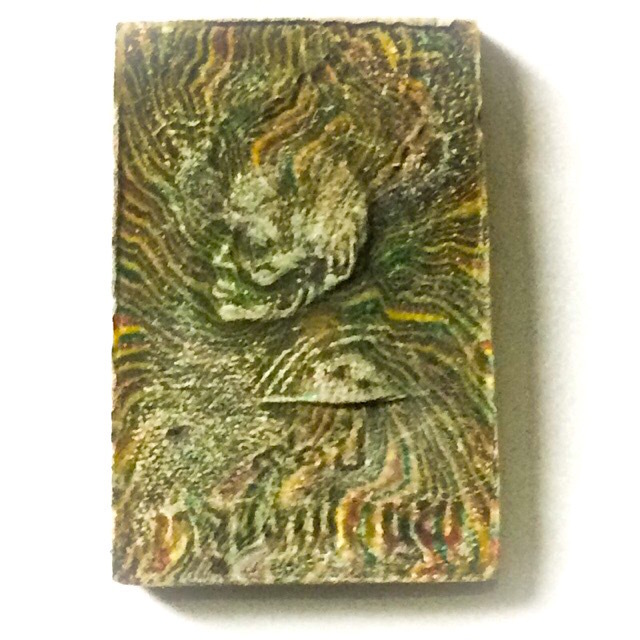 The Pra Nakprok Buddha is attributed to the day of Saturday, and is especially worshipped by those born on a Saturday. Others who worship the Birthday Buddhas, may worship all Seven Days of Buddhas (which actually in Thailand is composed of 8 different Buddhas, due to the fact that Wednesday has two Buddha Images, one for the daytime and one for the night time). 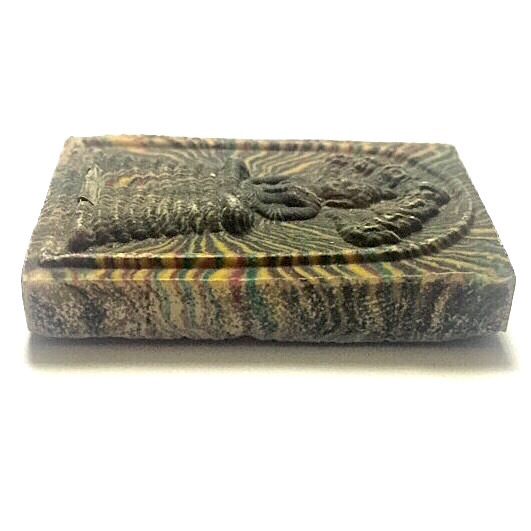 The 91 years edition was made in 2538 BE, as the last edition to be blessed by Luang Por Pae himself, and and later released in 2539 BE. It is therefore highly preferred for its being the final edition ever made by L.P. Pae before his Passing in 2542 BE after 73 years of ordained life at the age of 94 years old. 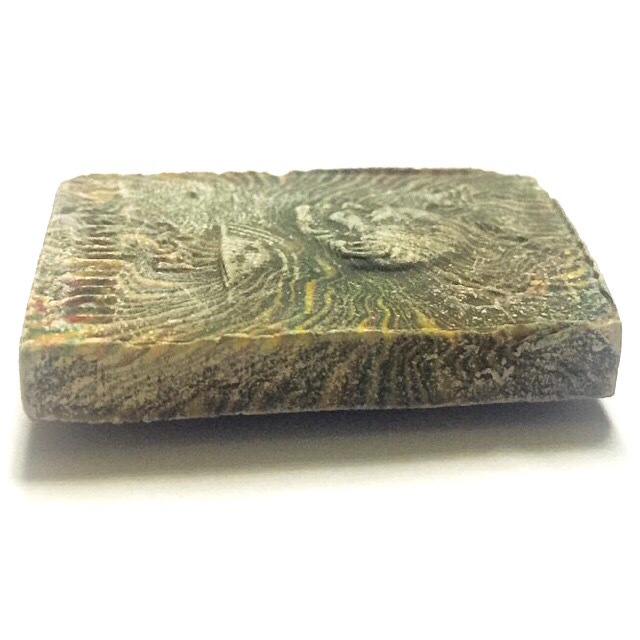 A most Classic and Esteemed Amulet that is now becoming very rare to see, especially in the rainbow powder versions, which are more highly sought after by many collectors around the world, due to the beauty of the multicolored Muan Sarn. 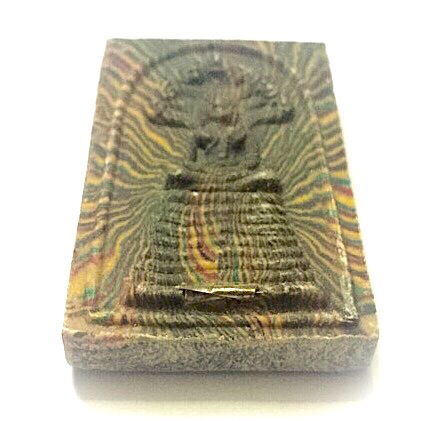 A Highly recommended amulet for its Sacred Blessings from one of the great Masters of the last Century, as well as a very wise future speculative investment, and a rare chance to snap up one of the last examples remaining, before they all disappear completely from circulation. 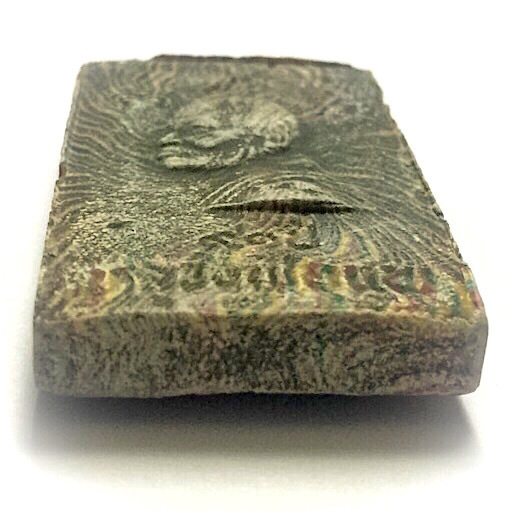 Luang Por Pae, or, better known as Somdej Sangkarach Pae, is one of the last half century's most reverent and long-standing respected monks of the royal procession of stateesteemed monks, Who has excelled in both his behavioural practice as well as his academic studies and adepts applied practice of Vipassana Kammathana in the Thai Tudong Forest tradition. 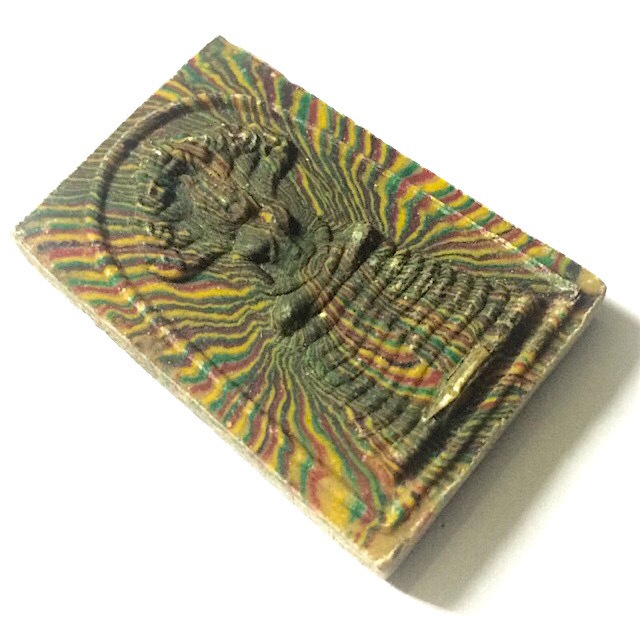 The amulets of this great master, have been seen to dwindle from the public amulet markets, which is due to the fact that not only Thai people have been revering and holding his Amulets over the last decade or so up, rather that all around Southeast Asia.

Luang Por Pae's amulets are famous for the mass of Pong Puttakun that rises to the surface and leaves a fine layer of white mildew upon the surface, revealing empowerment by a monk with true purity of practice. 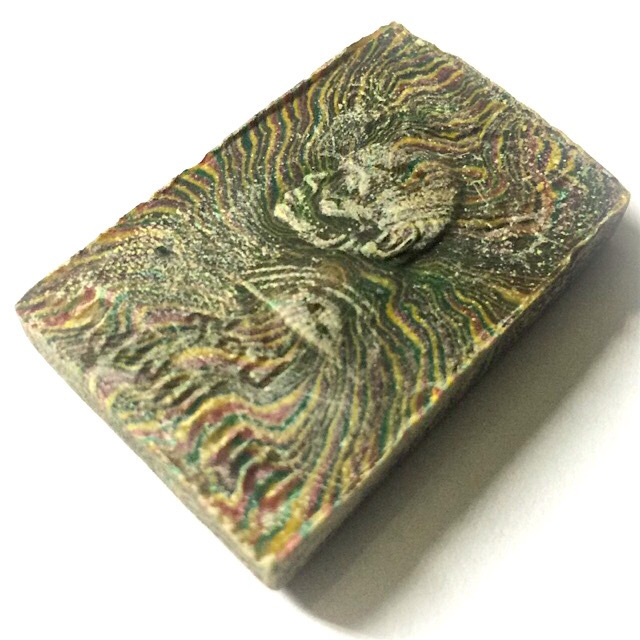 Even as far as western world, people have been snapping up and hiding and stashing away his Amulets like treasure that may never be found again, which is indeed going to be true pretty soon. 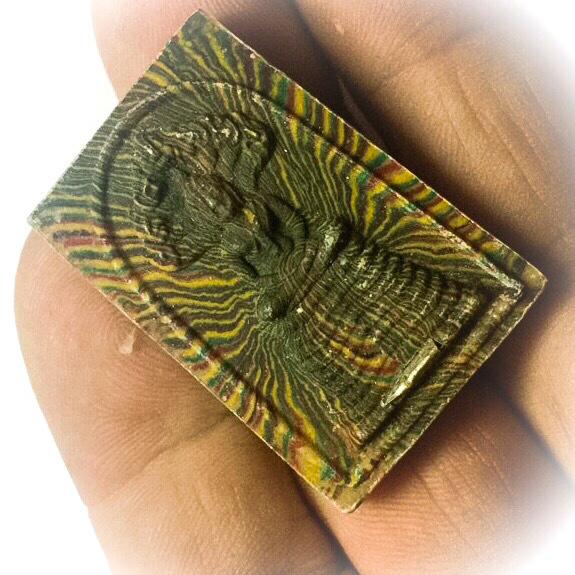 This has resulted in an accelerated depletion of his Amulets, despite the fact that classic Amulets made according to the official formulas such as the Pra Somdej amulet, are making numbers of up to 84,000 per edition they have still managed to begin to disappear from the public view. 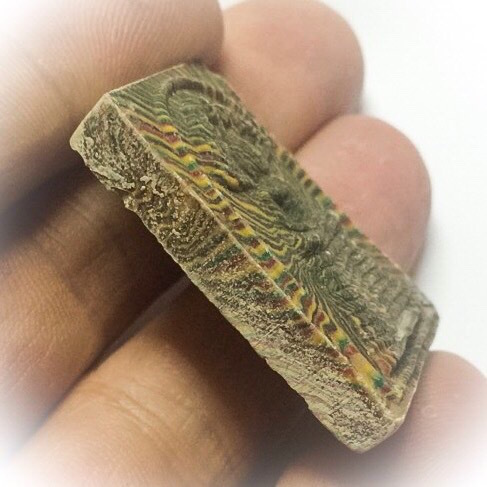 They are now not only becoming classics but also extreme rarities and the next decade can expect to see these Amulets becoming immensely difficult to seek out. The rear face of the amulet features a cameo side view image of Luang Por Pae, with the words '91 years Luang Por Pae' embossed 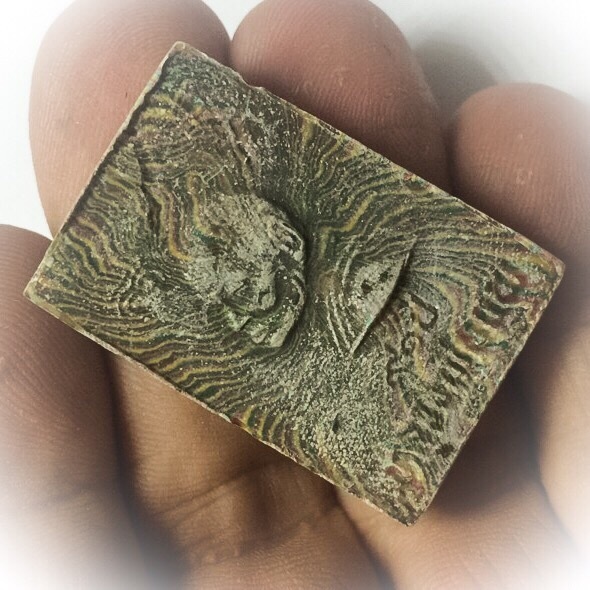 We can now expect to see the last remaining Pae editions of Luang Por Pae gradually become depleted, and in fact, the Rainbow colored editions are already immensely difficult to find, and are almost already depleted, which has become noticeable by there almost complete disappearance from public amulet marketplaces. 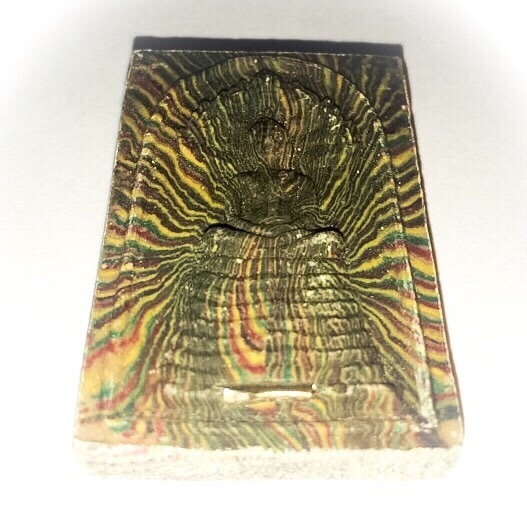 The Pra Nakprok Buddha, is known as 'Saturday Buddha'. The posture is of the Buddha sitting in Samadhi (concentrative meditation), on top of a coiled Naga Throne, the Naga's head is raised over Buddha's to form a canopy. It is known as "Bpaang Nakbrok" The Buddha remained in blissful rapture under the Acabhalanikaroda for seven days, whereupon he moved to the Mucalinda tree to the Southeast side of the Bodhi tree. A terrible rainstorm began, pouring down on the forest for a whole seven days without stopping. Payanaga Mucalinda, who was King of the Nagas, came up from the naga Realm in the underworld and coiled himself underneath the Buddha, making a cushion seven stories high, to keep him dry. He rose up and leaned his head over the Lord opening his neck canopy to shade the Buddha from the rain, as well as keeping watch to protect him from all sorts of parasitic, poisonous and preying animals and creatures. As the rains ceased to fall, the Naga King uncoiled and changed into a Human form and raised his hands in reverence to Buddha. 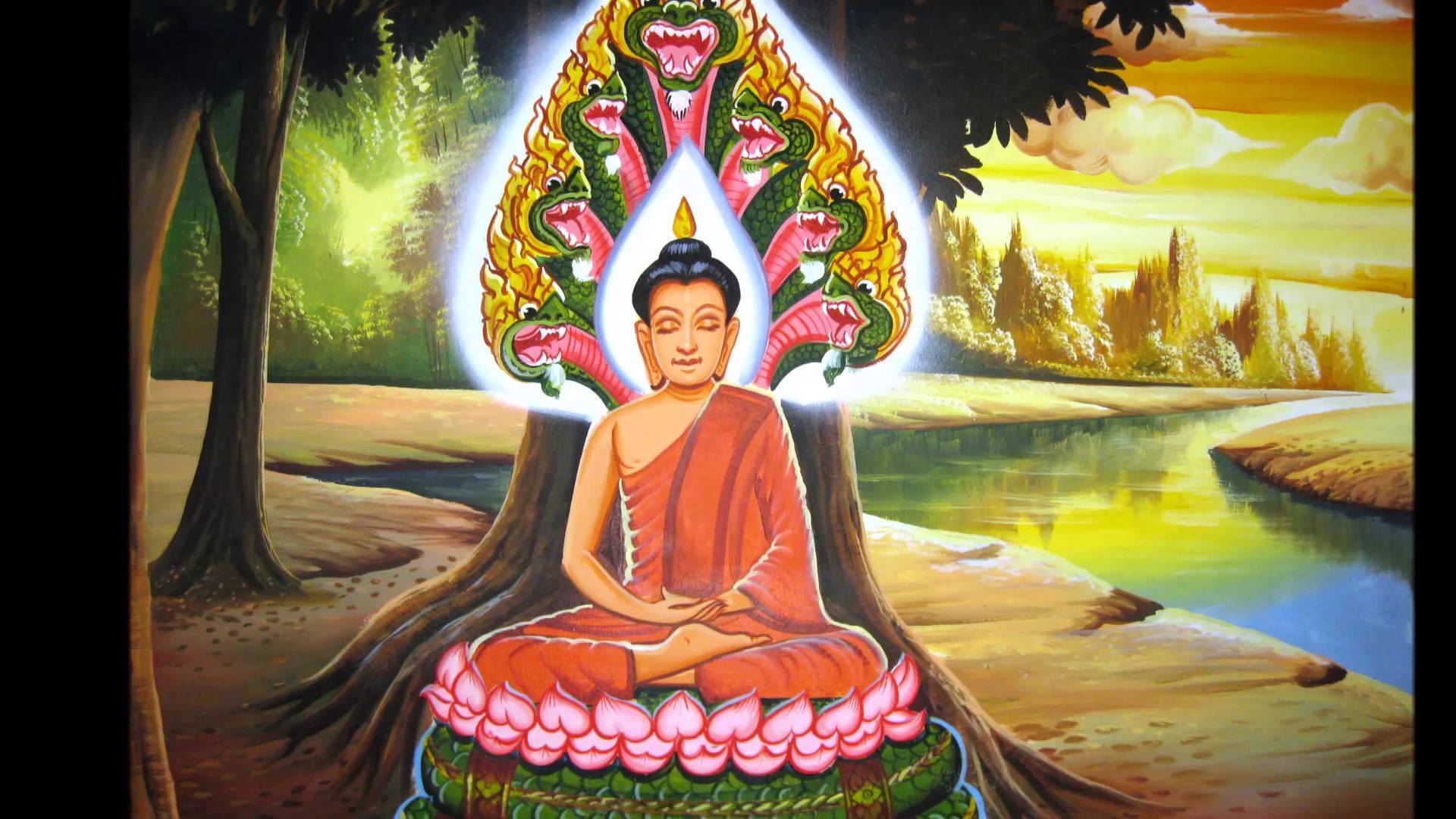 In this moment, the Buddha uttered the following Kata (words);

The statue of Buddha sitting on seven coils of the Naga King snake was created to remember this occasion of the Naga paying reverence to Lord Buddha, and the representation of him sitting on top of the coils as if seated upon a royal throne is used for two reasons;

A more authentic and historical version of this Buddha image is sometimes seen in the form of the Nagas coils wrapped around and covering the Buddha's body with four or five coils around him. The only part of the body visible being Lord Buddha's shoulders, neck and head, which is also semi enclosed by the head and canopy of the Naga leaning over him. 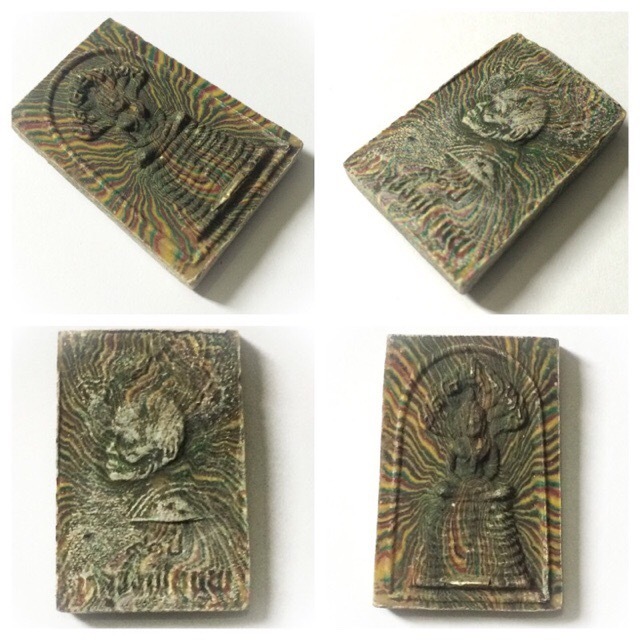