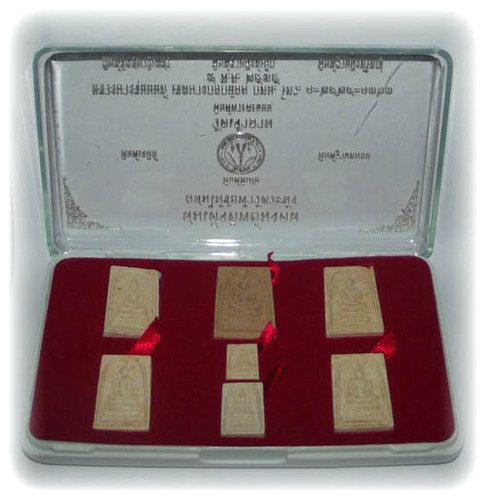 A most exclusive gammagarn collector set of seven classic Pra Somdej amulets from Wat Jao Arm. In fact, the sacred powder amulets from this set are made and blessed by various masters from many different temples. The amulets have undergone various empowerment ceremonies over decades, including the 2535 BE consecration ceremony of the Pra Somdej Chinabanchorn Gae Jag Mai Chor Fa amulets.

The amulets which were blessed in this edition are considered extremely powerful, for the ceremony, which was a highly sacred a famous event, which was performed by a massive array of some of Thailand's most famous and respected gaeji ajarn master monks, such as Somdej Prayan Sangworn (the Pra Sangkaracha head monk of the Royal temple), Somdej Pra Puttajarn of Wat Saket, Somdej Pra Mahatirajarn, Luang Por Phern of Wat Bang Pra, Luang Por Pae of Wat Pikul Tong, Luang Por Uttama, and, of course, Luang Por Tong Lam, who is the abbot of Wat Jao Arm.

Funds from these amulets go to finance the project to purchase a piece of land for Wat Jao Arm (see picture below), so that the monks can build facilities to have enough space to be able to offer the various services needed from a temple, such as weddings, funerals, and other social religious events. The temple has not enough room to be able to fulfill the requirements of the local people, and thus needs to be expanded. 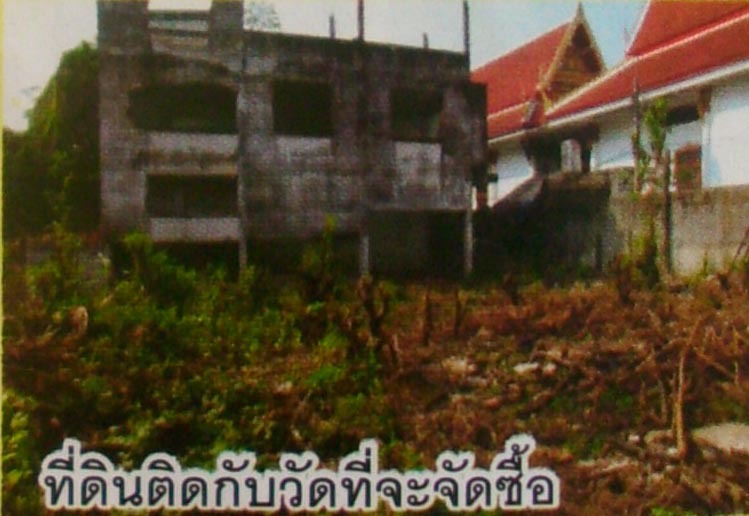 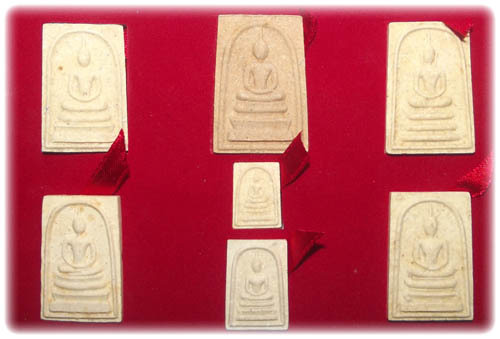 The Pra Somdej is a classic Buddhist amulet, which represents the Buddha sitting in meditation on top of a lotus throne. It is recognized as one of the five top amulets from Thailand, also known as 'benjapakee' amulets. This type of amulet has a long history of making in the royal temples in Thailand. The meaning behind the sacred image of Pra Somdej thus carries important historical information, as well as cultural and artistic value. 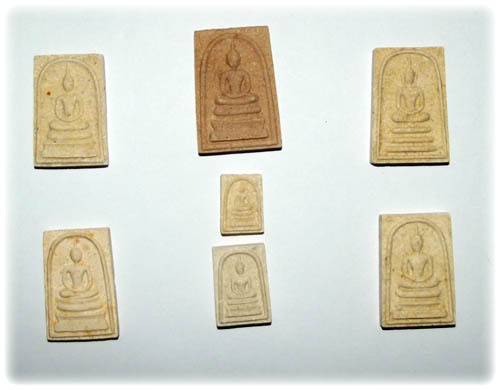 As to the multiple ritual consecration ceremonies performed to empower these Pra Somdej amulets, this obviously charged the sacred powder amulets with tremendous power as a result of the large number of great guru masters who blessed the Somdej images. Similarly, the sacred ingredients used for the making of these Pra Somdej amulets have absorbed the highly auspicious vibrations and energies that were transmitted onto the amulets. 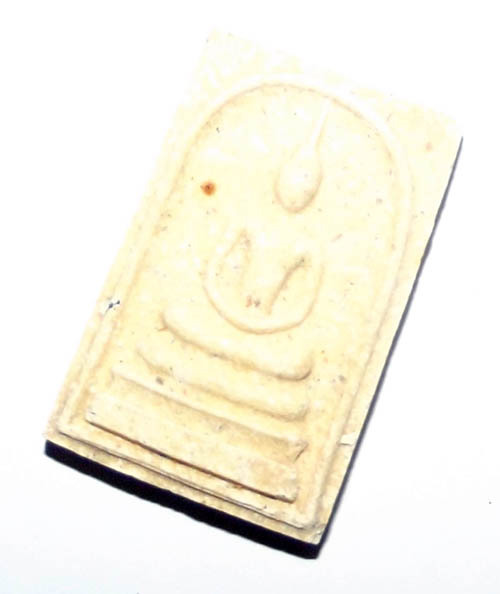 Through the course of time, the sacred muan sarn from which these Pra Somdej amulets were made, have changed the appearance of the exterior surface of the amulets. Due to the unique ageing process, both the sacred and monetary value of these amulets will continue to increase significantly over time. Thus, this special gammagarn set of seven different models of Pra Somdej amulets from Wat Jao Arm, is said to be a favorite acquisition for the true and dedicated collector of genuine and sacred Buddhist amulets. Also, the complete set as a whole is a most valuable heirloom piece for future generations. 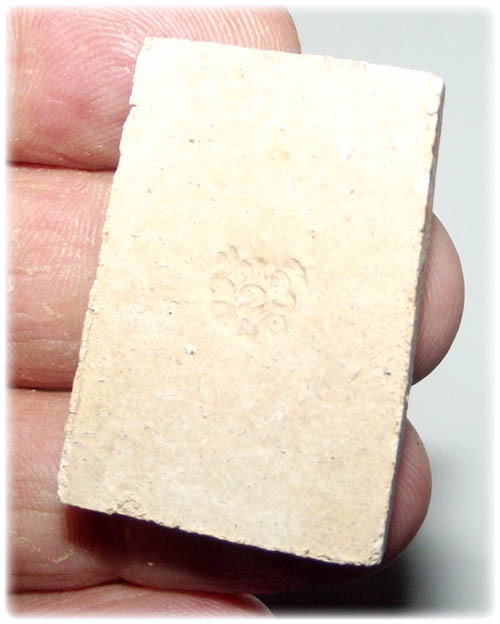 The sacred powder Pra Somdej amulets in this set have the official temple mark stamped on the rear face of the amulet. 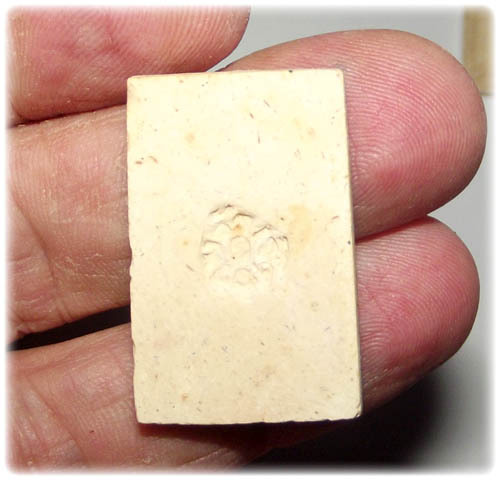 Wat Jao Arm is situated in Bang Khun Nont in Bangkok Noi. It is a very old temple of the Tonburi era, which was built by Somdej Prajao Taksin Maharaj in 2322 BE. The temple was built in honor of Somdej Prajao Taksin Maharaj's concubine named 'Arm', who was also known as 'Jao Arm'. At the same time, a chedi prang stupa was built wherein the remains of Jao Arm would be preserved. In its heydays, the natural environment of the area near the temple was characterised by a lot greenery and vegetation, yet over time the population increased significantly. However, Wat Jao Arm soon could no longer facilitate the rapidly growing demand for the various religious services to be provided to the laity. Hence, in order to be able to provide the lay people the public services they ask for, such as weddings, funerals, ordinations, etc., Wat Jao Arm is forced to expand the temple grounds. Through the making and distribution of these Pra Somdej amulets, Luang Por Tong Lam thus tries to find a way to gather the funds needed to buy an extra piece of land. 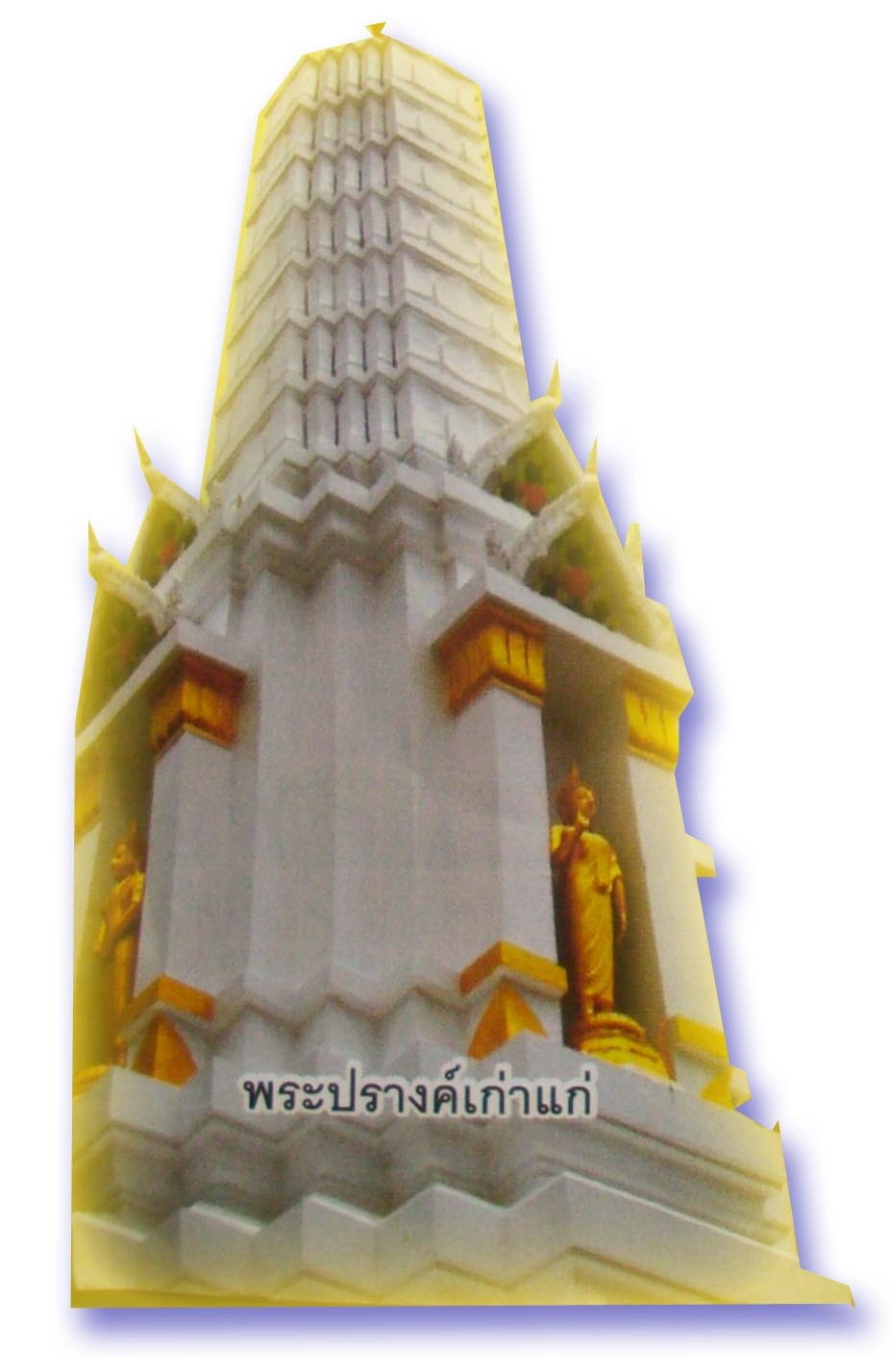 It is said, that the generous person whose sincere intention is to selflessly contribute to the accomplishment of such a noble cause as intented by the sangha, will accumulate innumerous merit and virtue by the act of giving dana. One who correctly performs the practice of generosity will thereby create auspicious causes for both him or herself and for the community this person is a part of. Also, it can be considered a wholesome deed of preserving the Buddhist religion in this world for future generations. 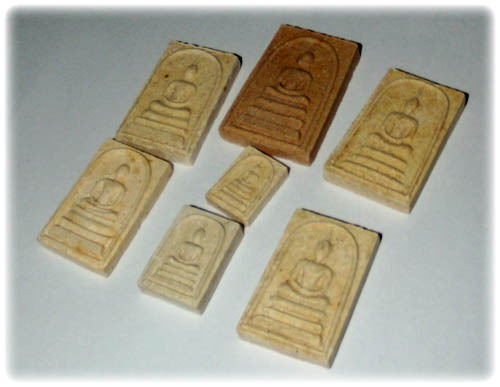