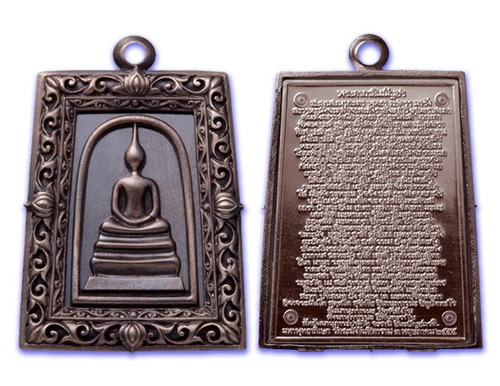 A Luxurious Fancy Frame encases the Pra Somdej Wat Rakang (Pim Yai) Amulet, which is made from a Mixture of 9 types of Sacred Yantra and Brazen Metal Artifacts. The rear face has the Chinabanchara Kata, made so Famous in Thailand by Somdej Pra Puttajarn (Dto) Prohmrangsri, embossed. The amulet is astounding, a 3 piece work of Fine Engineering and Artistic Buddhist artisanry, and a New Presentation for this Classic Benjapakee Amulet. Blessed in two Major Putta Pisek Ceremonies and released in the Benja Baramee edition series of Classic Thai Buddhist Amulets of reference Standard. The three pieces used to assemble this Masterpiece Amulet consist of; The Image (amulet) the Frame, and a Kata Chinabanchorn complete Mantra in Miniature on the rear side of the amulets. 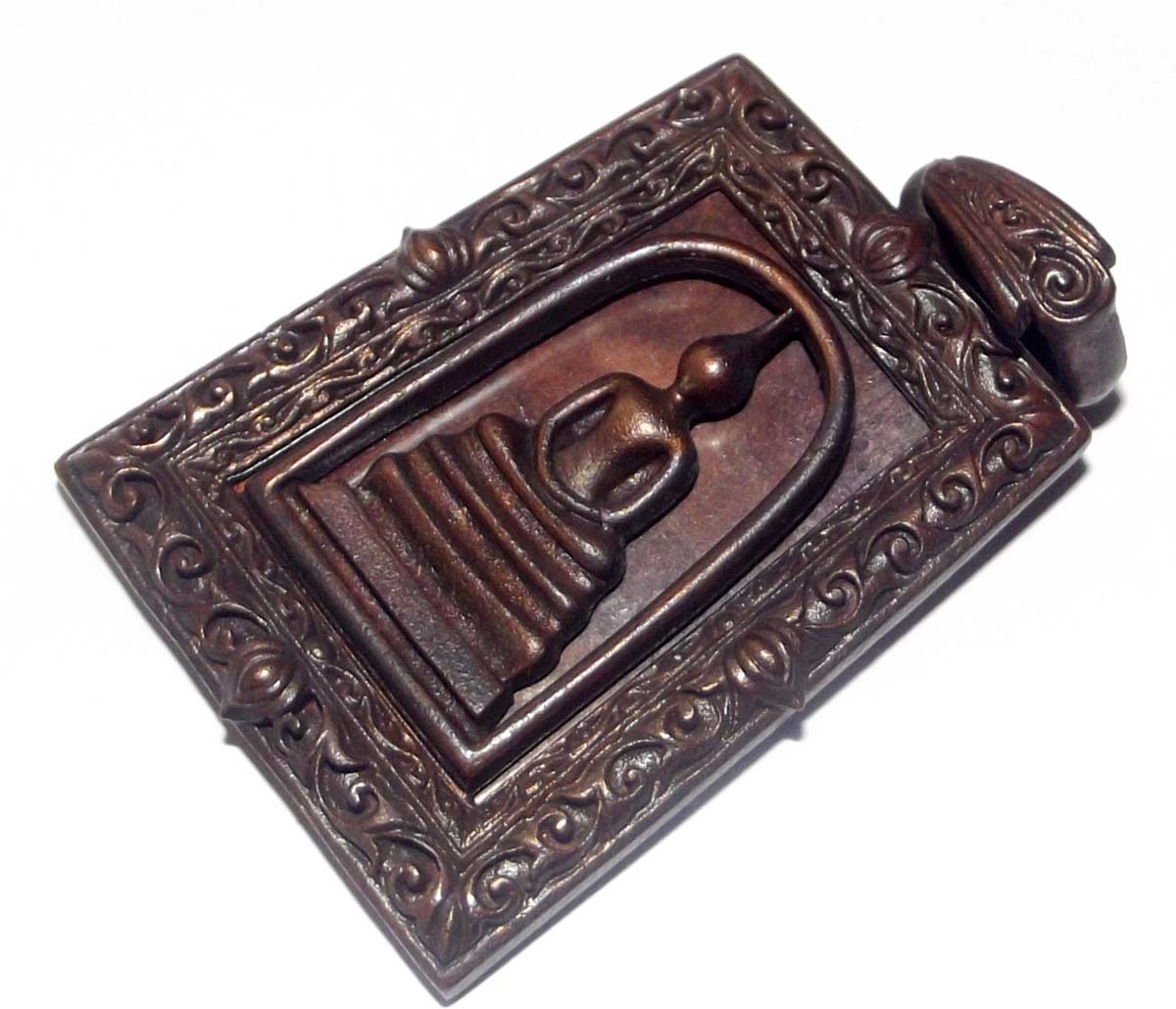 A Most Excellent Pra Somdej in 9 Sacred Metals, that is built to last Centuries, and is Notable for its Originality and Beauty of Frame Design. A first for Wat Rakang Kositaram temple, and therefore, a new Milestone in the History of Wat Rakang Am,ulets, that will mark a New Era in Thai Fine Miniature Buddhist Arts and Amulet making methods for the coming Generation. The new appearance of 3 piece metal coin amulet technology is allowing a new level of Fine Art to be applied to the Art of Buddhist Amulet design and Casting. Various Top Temples and Masters Such as LP Kambu (Wat Gut Chompoo), and LP Khiaw (Wat Huay Ngo), are Spearheading the new Movement of Coin Designs which is now clearly and fully accepted by the Traditional 'Wongarn Pra Niyom' (Amulet Collector and Expert scene). 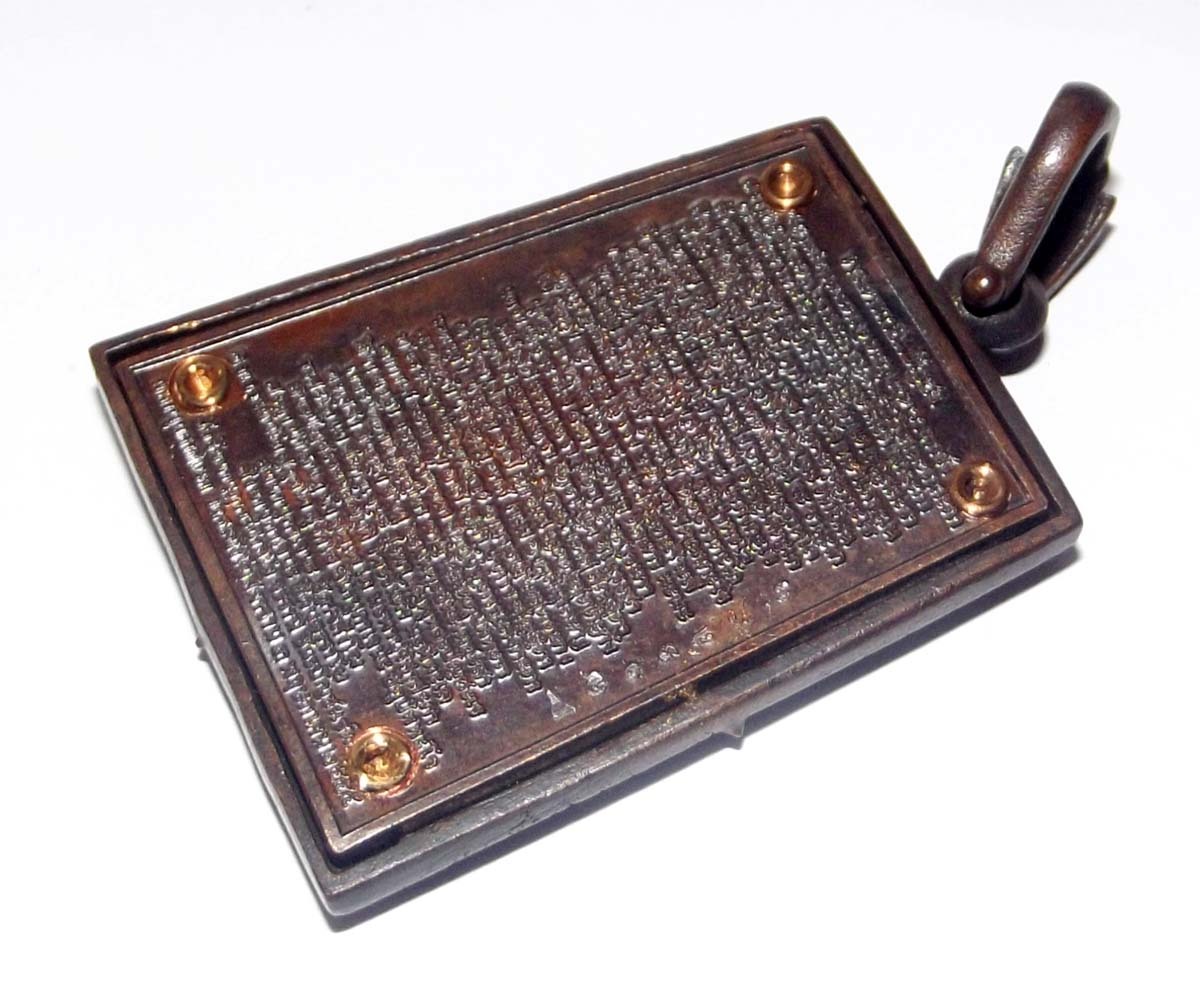 The 'Ba Chalu' method of decorative multi-piece coin amulet making, is therefore a certainty to survive and develop in the High end top Master amulets scene, as the preferred (Niyom) kind of amulet for the future. Wat rakang hgas now sealed the case for the Future by adding itself to the list of Respected Temples that prefer this most beautiful and aesthetic method of Luxury Amulet production. 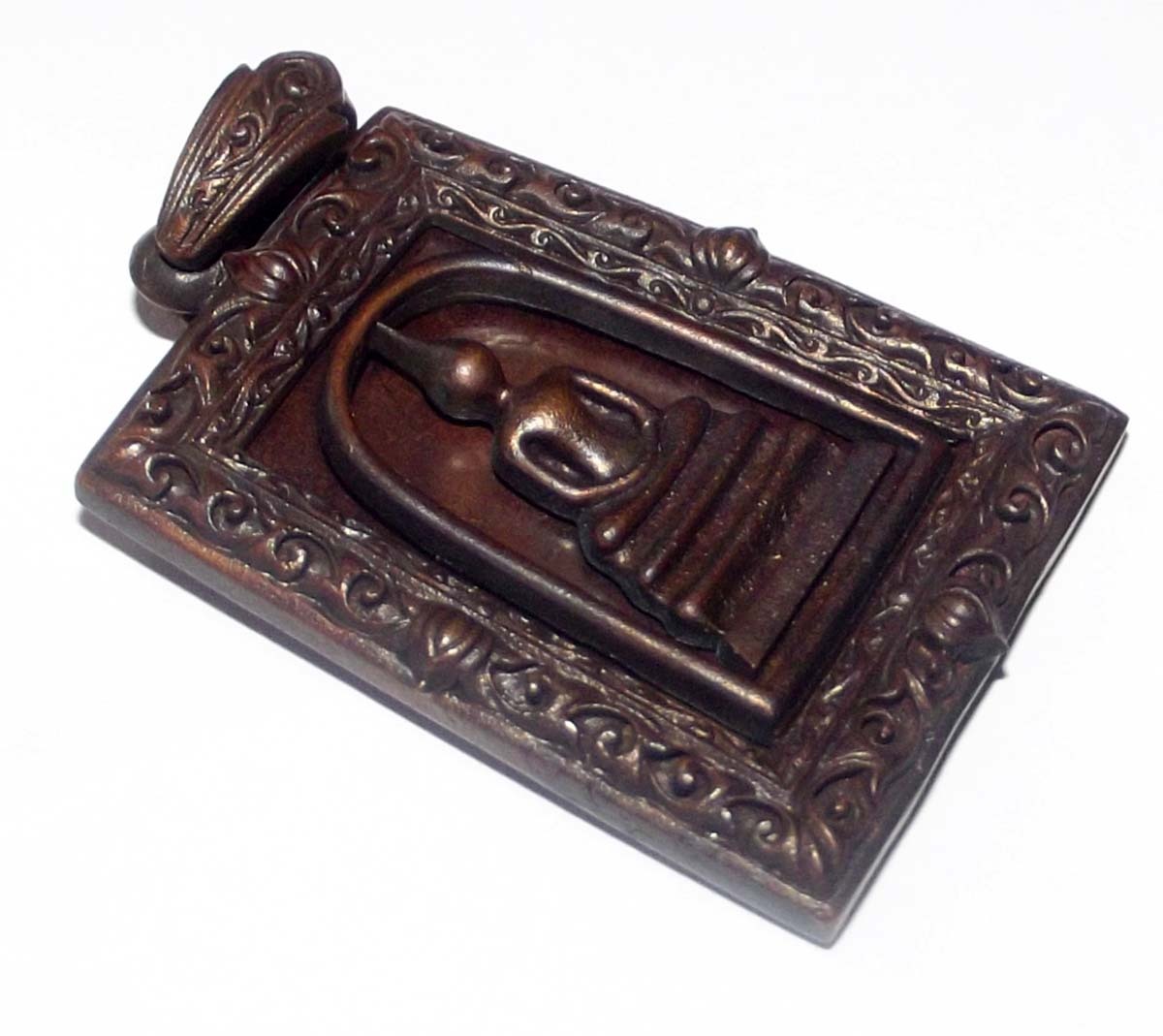 Only 999 of these amulets were made in Nava Loha.

The amulets were blessed in two separate Putta Pisek Empowerment ceremonies, the first being held at Wat Rakang Kositaram. One Oblong Shaped Image in casing, and one bell shaped  model (Pim Song Rakang Chalu Lai Yok Ongk), which is an allusion to the name of the temple of Wat Rakang ('Rakang' means 'Bell'). The truth is however, that even the Pra Somdej Pim Yai's Arch, represents the Bell Shaped Symbolic of Wat Rakang. This is the Design reason for the Arch around the Buddha. 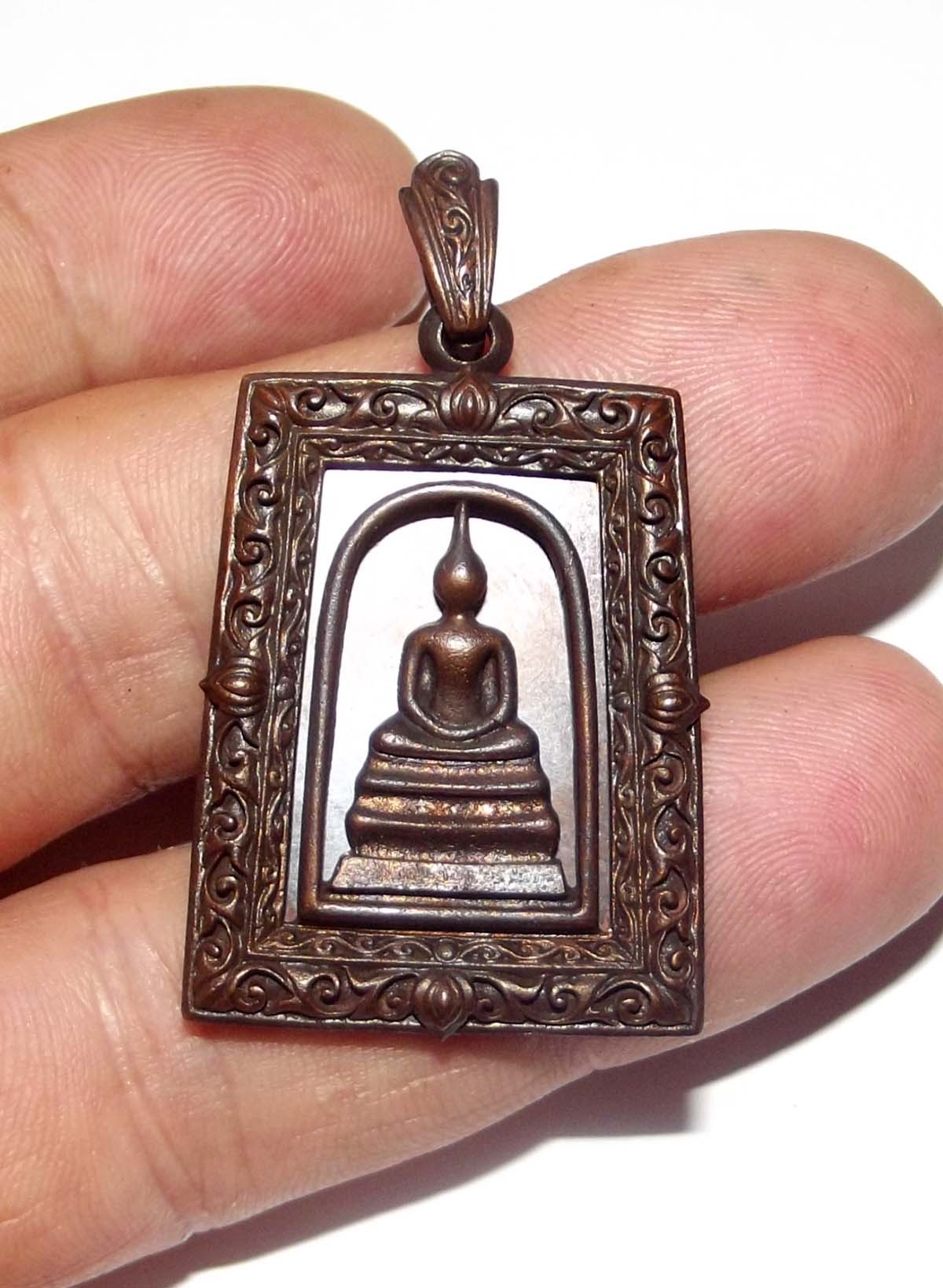 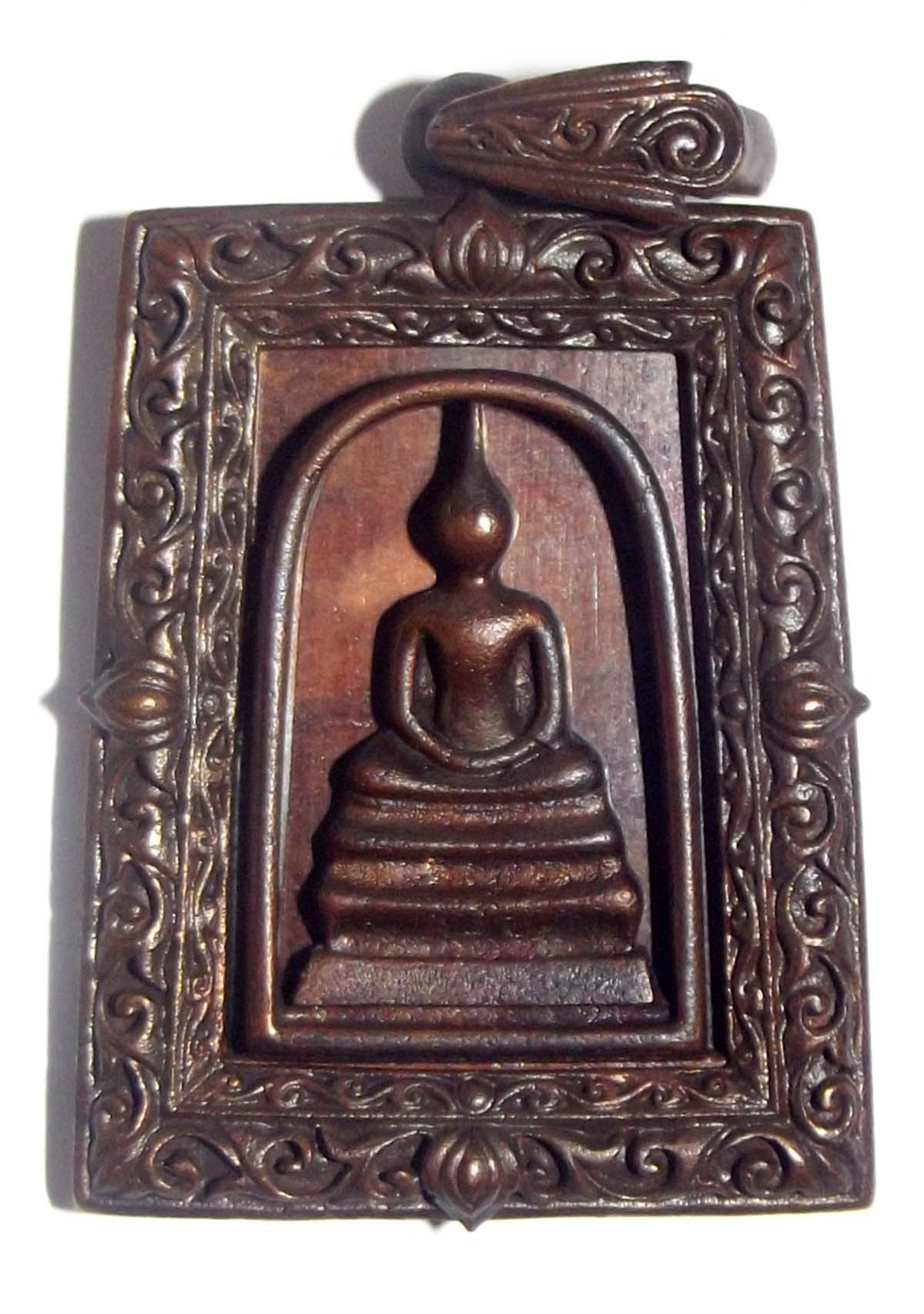 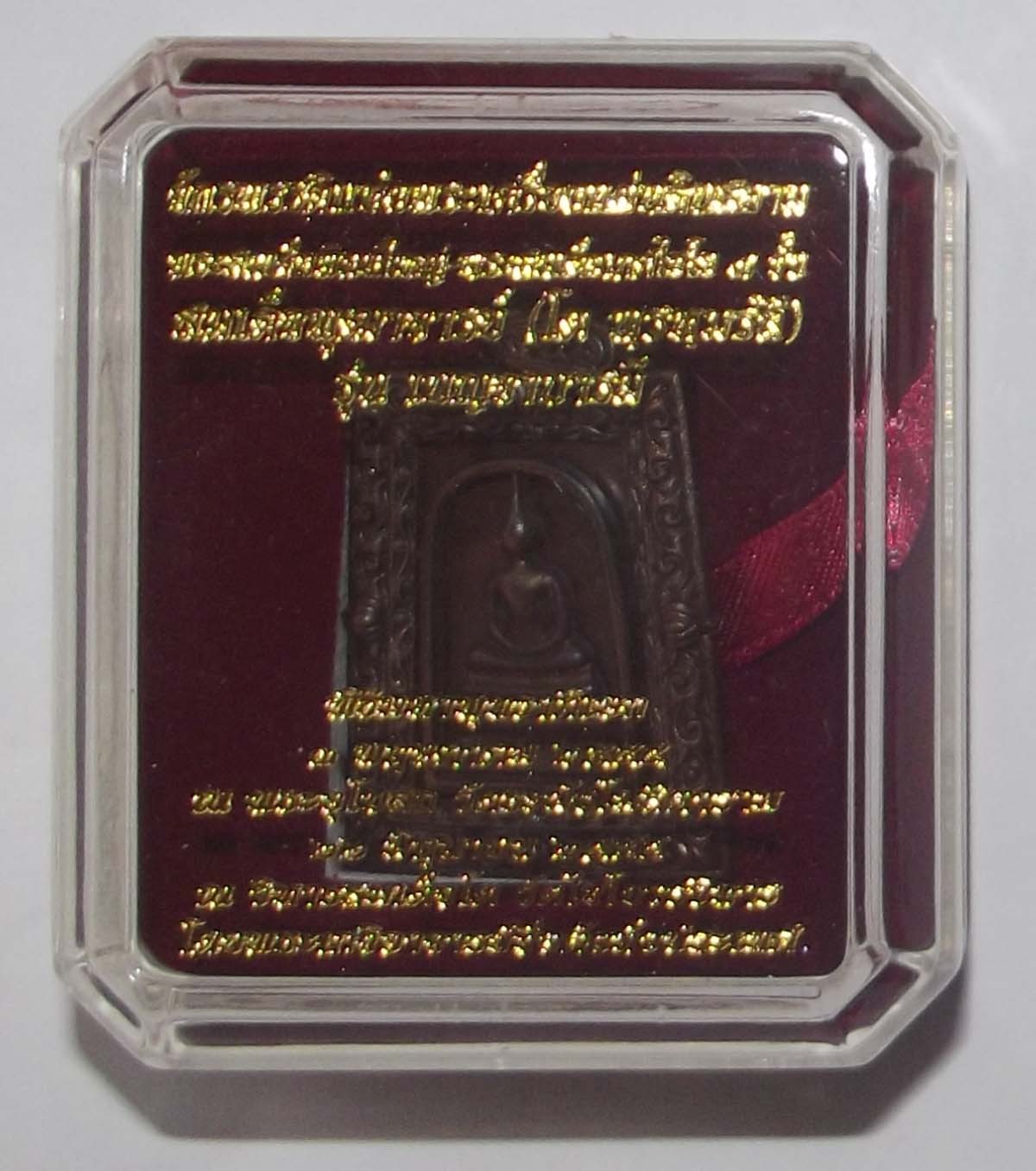