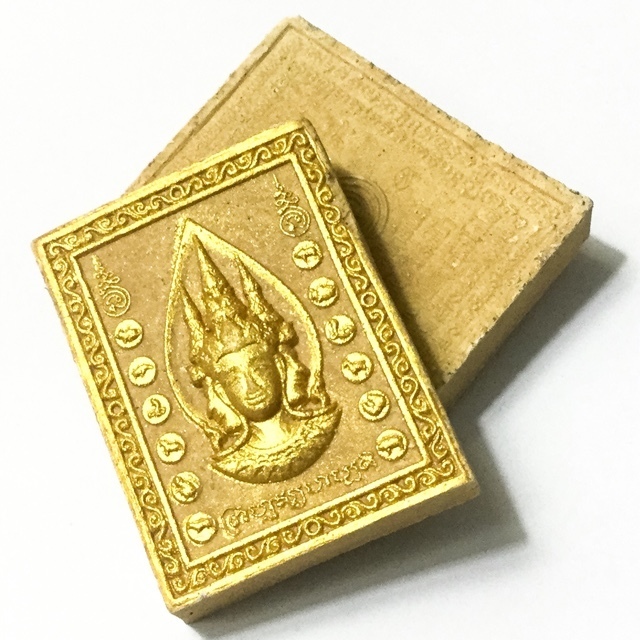 The amulet is made from rich admixture of Pong Wan 108 Muan Sarn Sacred Powders, and features the 4 faced head of Brahma, surrounded by two pillars of Sacred Agkhara spells. The name of the Ceremony in which the amulets were blessed is also embossed 'Piti Bao Yant Prohm See Hnaa', which was Luang Phu Nong's famous Blowing of the 4 Faced Brahma Yantra Spell Ritual. 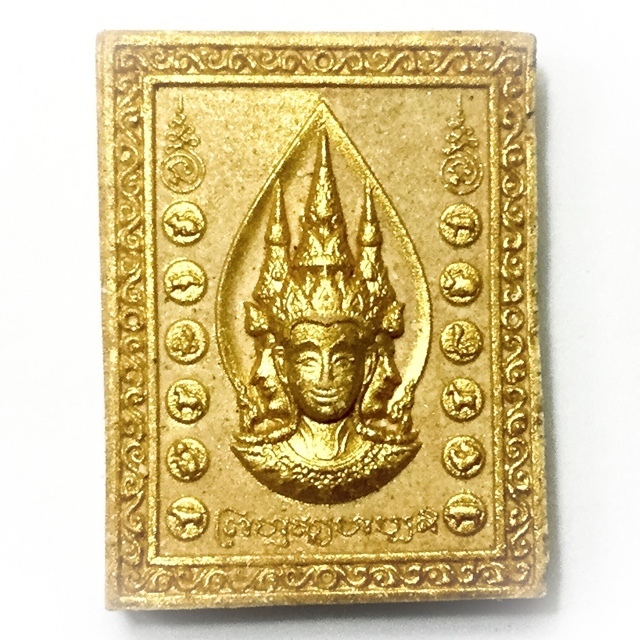 The Great Four faced Brahma Yant was invoked by Luang Phu Nong, and manifested on the Astral Plane and blown into the amulets, and the devotees who attended the ceremony.

Brahma is Patron deity of various Professions, But is also a great source of Metta and protection. Brahma worship can bring both Metta Mahniyom, Maha Sanaeh, as well as success and even protection. 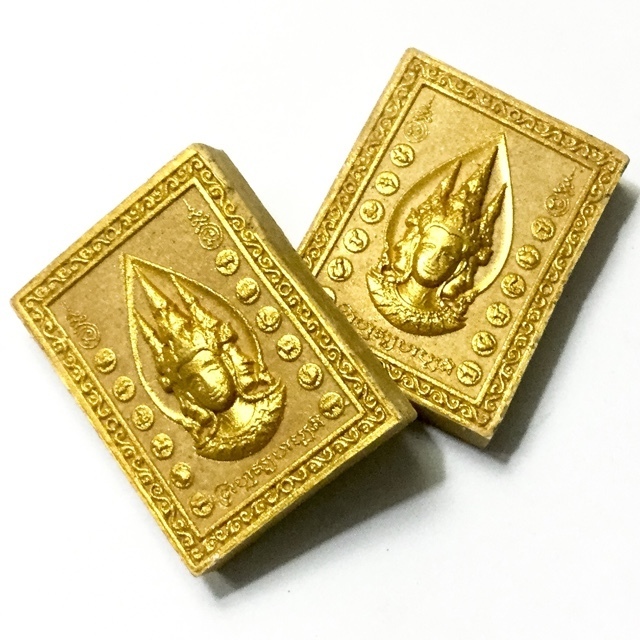 The Brahma Deity has four faces, and you will see this Deity house in all major public meeting places in Thailand, for it is believed that the Brahma Deity draws people from all four directions. This attracts customers to your shop, is therefore good for business.

Those wishing to increase their auspicious Fate (Horoscope improvement) and to recieve many blessings, protection and increase in Business, be more popular and recieve helpful treatment from others, are suited to the Brahma Deity amulet. 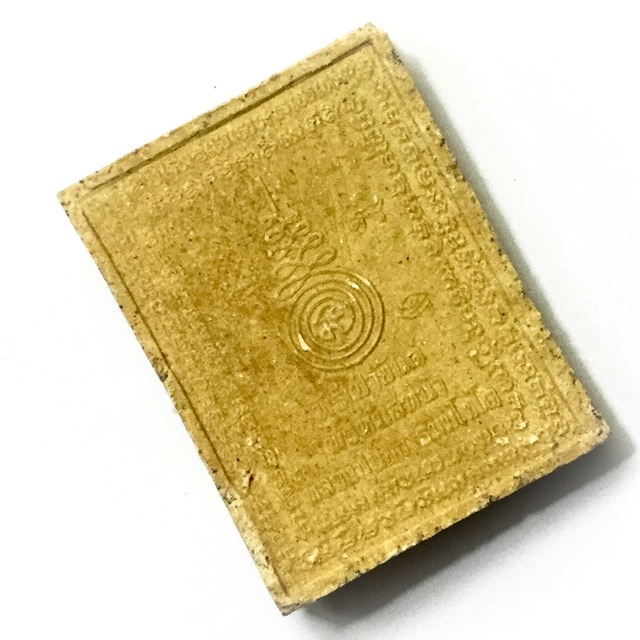 Rear Face of the amulet has the Sacred Na Metta embossed in the center, with a host of Khom Pali Kata Incantations around the edges of the amulet. Below this, the name of its maker 'Luang Phu Nong Tammachodto' is embossed. 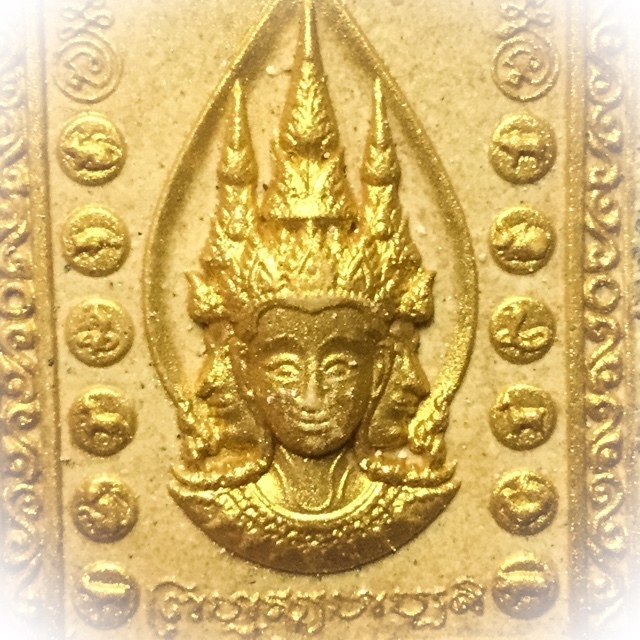 This amulet is one of our special offers available free for customers who purchase over 80$ of goods.

To get it for FREE, you must first proceed by purchasing 80$ or more in Goods, and then adding this amulet to the shopping cart at the end, before checkout. Simply add the code to the coupon code area in the checkout, and get a full reduction of the price of this amulet. This will then give the amulet free of charge (with Casing included Too!). You must add the following coupon code during the checkout process, in the provided coupon code area; 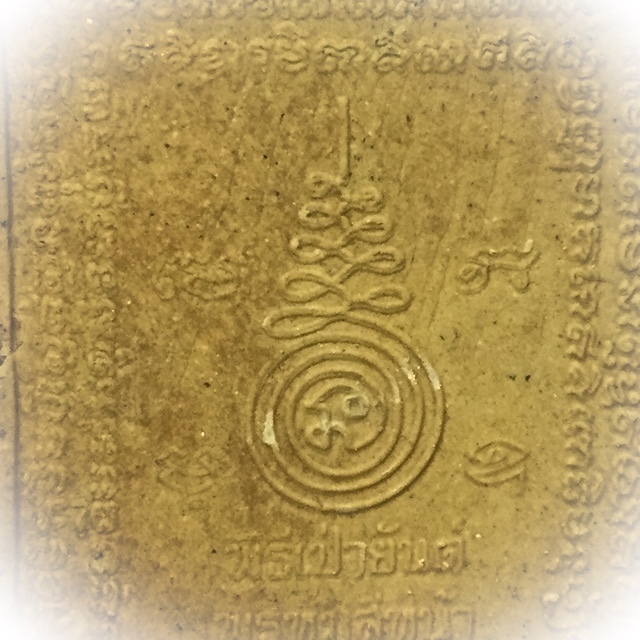 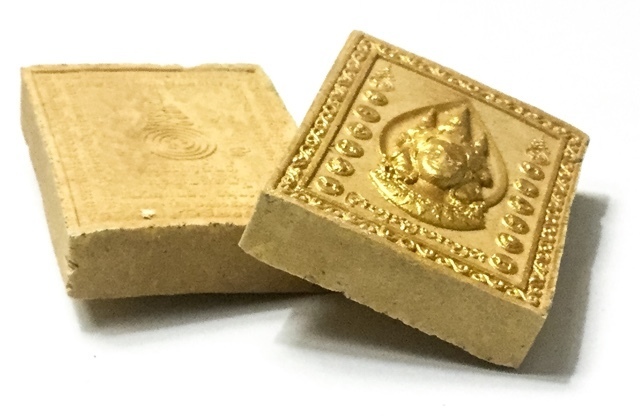 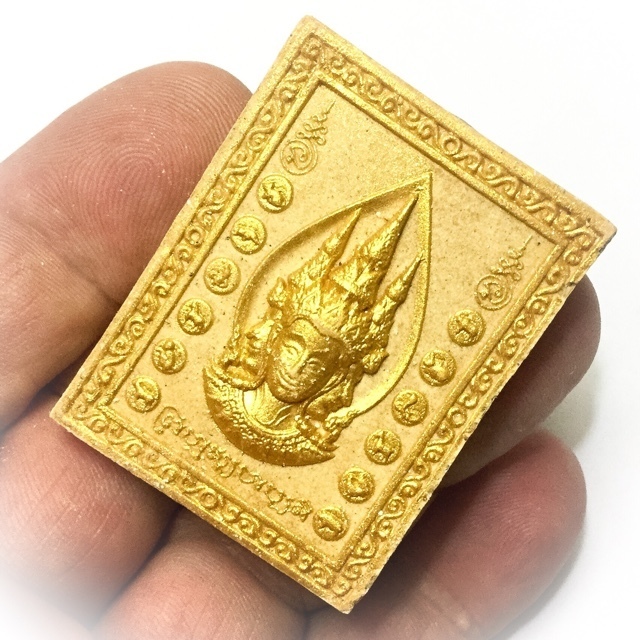 MORE MANTRAS AND PRAYERS TO BRAHMA 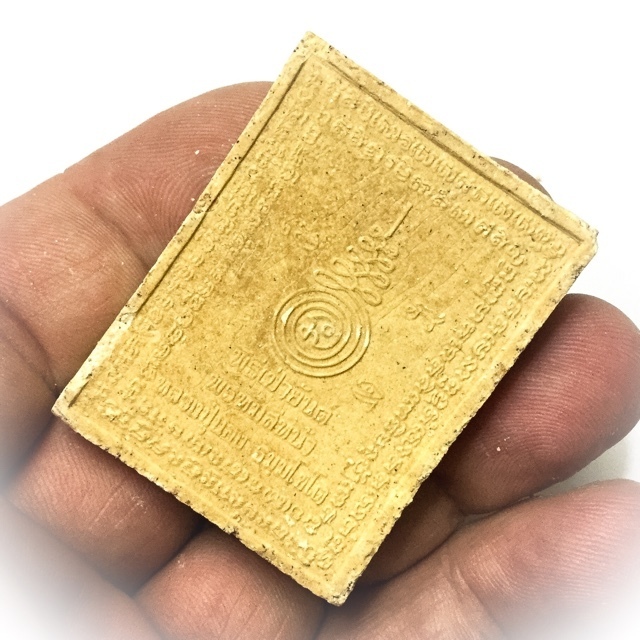 Within the Hindu trinity of Brahma, Vishnu and Shiva, Brahma is the creator, Vishnu the preserver and Shiva the destroyer. Nevertheless, Brahma grew in a lotus out of the navel of the sleeping Vishnu. 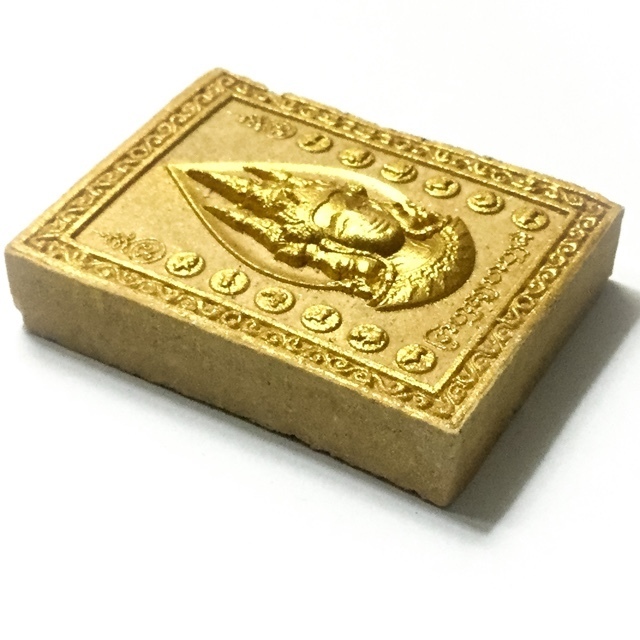 In order to create the world and produce the human race, Brahma made a goddess out of himself. One half was woman and the other half was man. Brahma called the woman Gayatri, but she also became known by many other names such as Saraswati. Brahma has four heads, but used to have five.

The four extra heads appeared when Gayatri was very ashamed with Brahma’s love for her and tried to escape from his gaze. The tremendous tapas that Brahma had practiced for the purpose of creation was entirely annihilated through his desire to unite with his daughter. One head was lost later when Brahma lied to Vishnu and thus caused Shiva to become very angry. 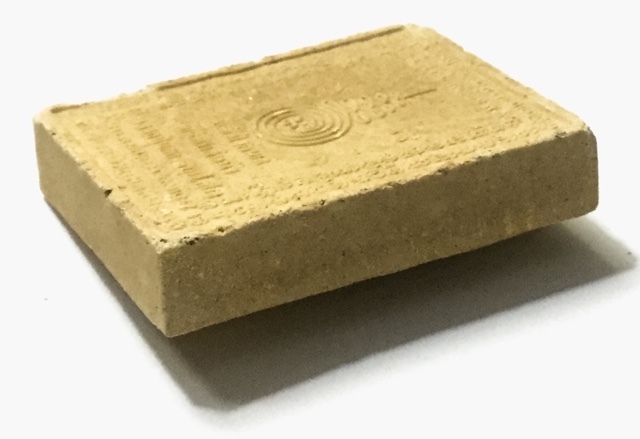 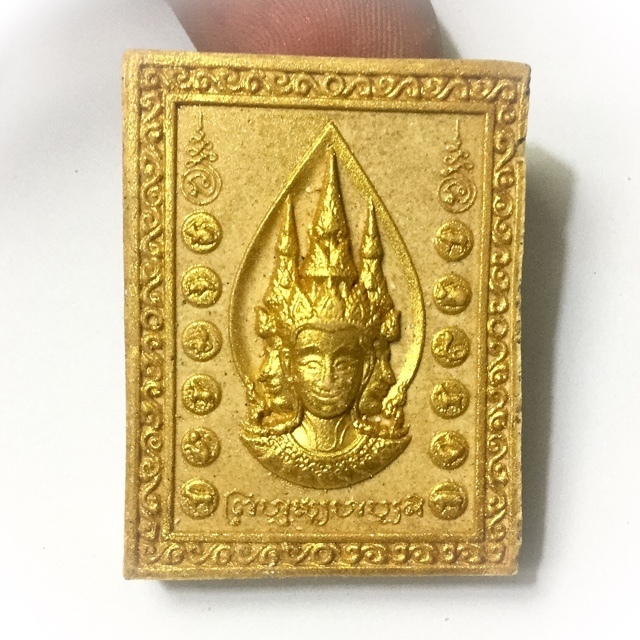 He holds the Wicha of Luang Por Derm, for which he has now taken the forefront in making Loi Ongk statuettes of the Great Guru Master (L.P. Derm), according to the correct Dtamra (formulas and shool of thought) for making Luang Por Derm statuettes.

His dominion of the fire element in his empowerment methods, is the access point to all elemental magickal evocations in Thai Buddha Magic. The Fire Kasina is a form of Sorcery for which Luang Phu Nong has become one of the all time present masters, for his immense confidence in invoking and indeed evoking the Fire Kasina elemental power within his amulets. 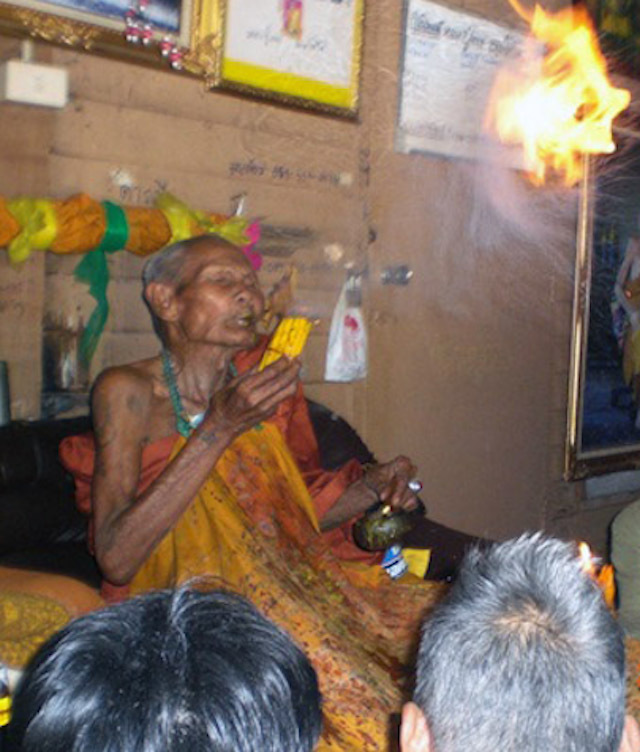 Luang Por Nong's amulets are both powerfully made according to the Wicha of Luang Por Derm, as well as having been designed and created by some of Thailands finest Buddhist and Brahman artistic craftsmen. A perfect combination of powerful sacred Buddha Magic and Beautiful aesthetic Religious Art. 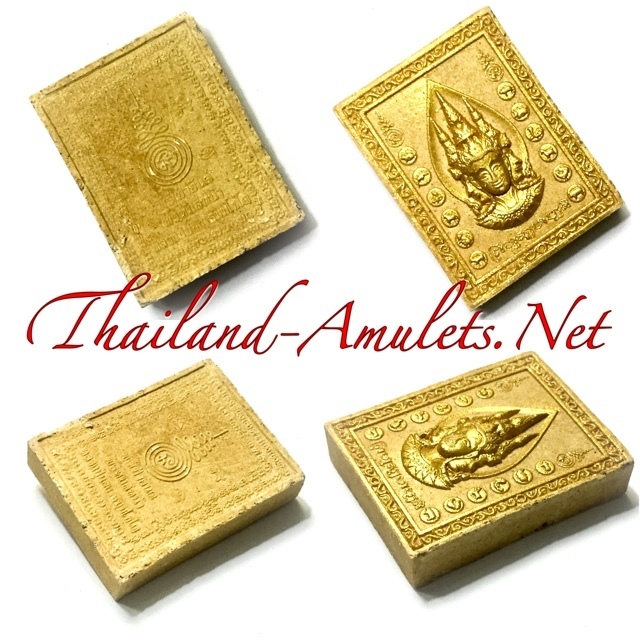