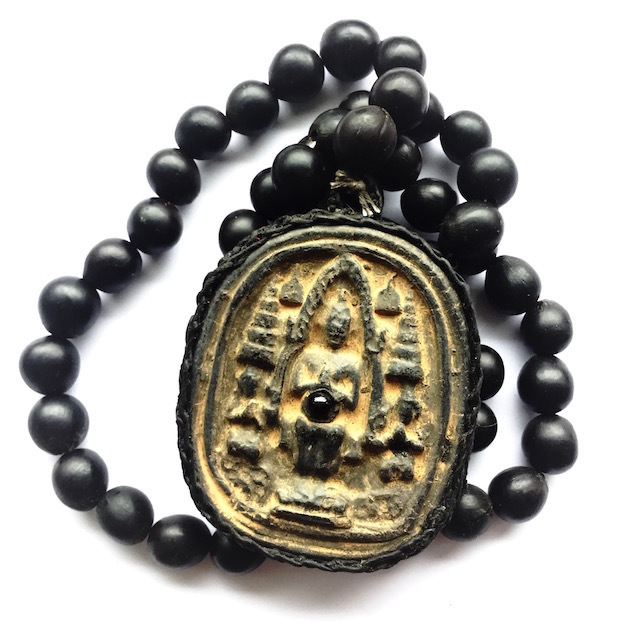 This Pim of Pra Yord Khun Pol is known as 'Pra Yord Khun Prohm' after its maker, Luang Por Prohm. It is the very same Pim, that the Dtamnak Dtak Sila Khao Or Southern Academy of Sorcery have been making since the days of the Great Originator of this particular Pra Yord Khun Pol began the Dtamra - In fact, anybody who is a devotee of the Khao Or Lineage, who sees this amulet will immediately think of the Great Ajarn Chum Chai Kiree. 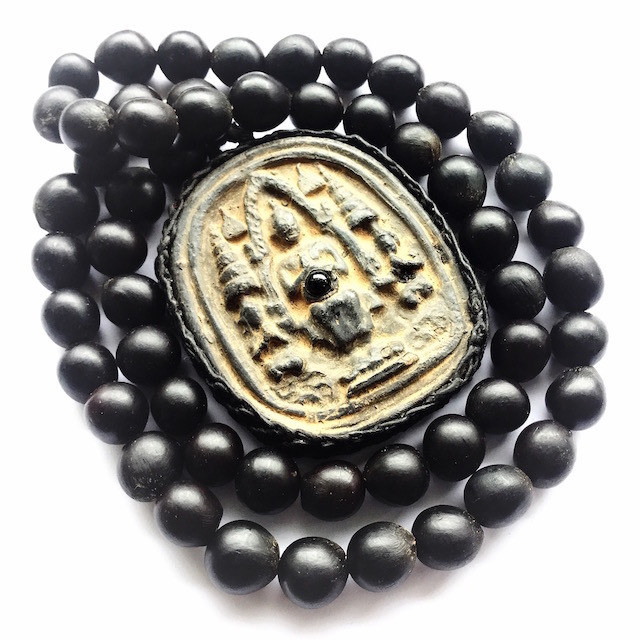 The Pra Yord Khun Prohm emulates the Yord Khun Pol, a traditional amulet that has been made since the era of the Lopburi Kingdom. Made with Din Kakyayaks earth, and a bead of Lek Lai Kayasiddhi Substance inserted into the center of the front face, which features the Pra Yord Khun Pol Buddha Image (in truth Maitreya), with entourage. 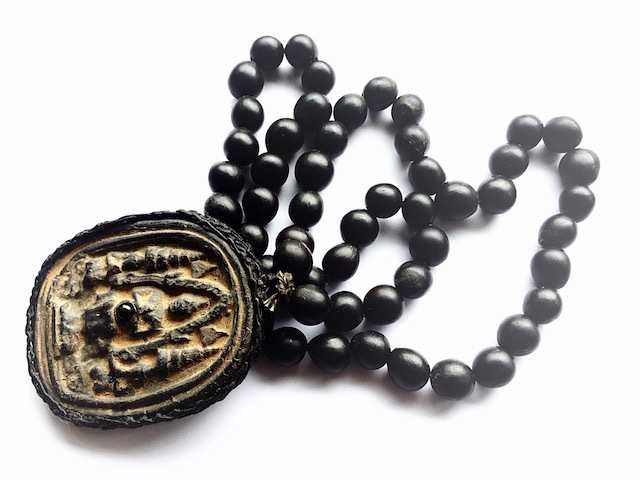 The rear face features a bodhi leaf pattern, made by a Bodhi Leaf. This model is made and released by Luang Por Prohm, the current Abbott of the temple of Wat Ban Suan, in Pattalung. This is of course one of the three major temples of the great Khao Or Sorcery Lineage, which was preceded by the previous abbot of great fame for his powerful magic and amulets, the inimitable Luang Por Kong. 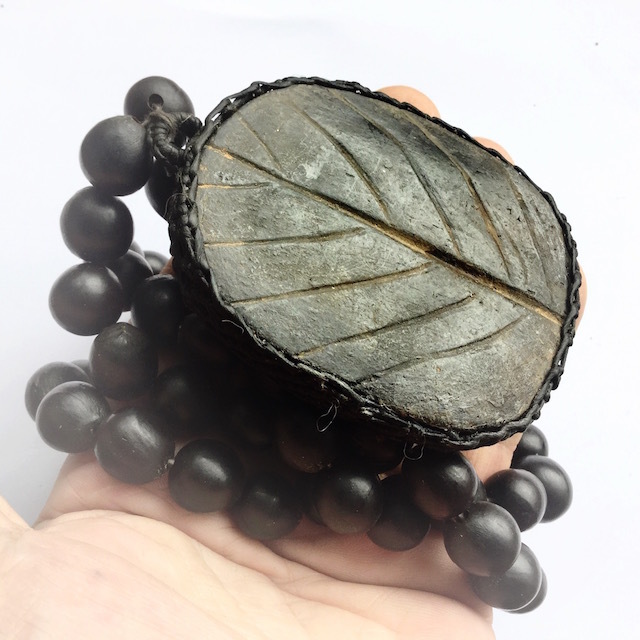 The rosary is composed of 54 Prakam Dee Kwai Berries, and a Pra Yord Khun Pol Pim Yai Amulet, with Lek Lai Kaya Siddhi Adamantine Substance Bead inserted. Highly recommended for Meditators, and for Devotees of the Yord Khun Pol Amulet, the Maitreya Buddha, and of the Khao Or Master Lineage.

This edition was released in the 2548 BE Sang Yord Prataat Chedi edition, which became a legendary edition in its own right, and has now been followed by a later edition of the Yord Khun Pol, called 'Pra Yord Khun Prohm, which was released in the 2556 BE Traimas edition. Each edition stores the remaining amulets after release, in the Chedi Stupa, to be dug up and released in later years. This edition will also join the previous ones, which still have numbers in the Kru Higing Chamber of the Chedi Stupa, preserving a certain reserve of each edition, for future distribution and for preservation purposes. 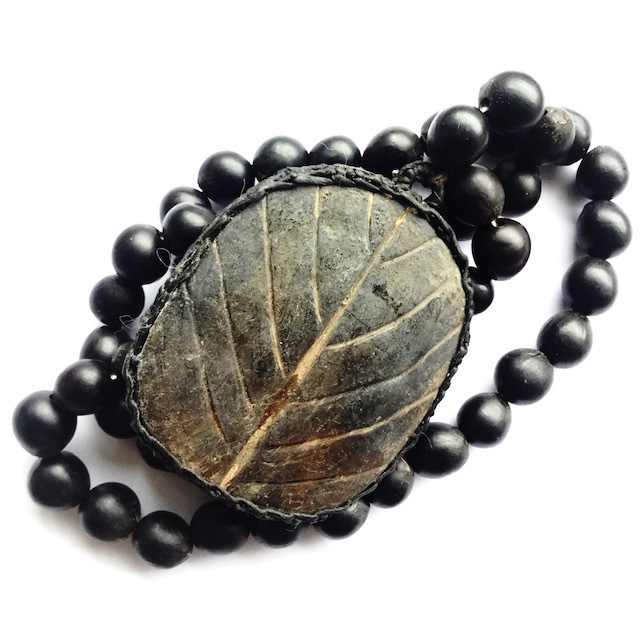 These Prakam Dee Kwai Berry Bead rosaries and Yord Khun Pol were blessed and released in 2548 BE at Wat Ban Suan after Putta Pisek Blessing and Empowerment from Luang Por Prohm and the Khao Or Masters. Released in the 'Srang Yord Prataat Chedi' Edition of 2548, which raised the funds and celebrated the building of the top spire of the Buddhist Relic Stupa Chedi at the temple. The design preserves the Khao Or Lineage Tradition of this amulet by maintaining the design used originally by Ajarn Chum Chai Kiree of the Dtamnak Dtak Sila Khao Or Southern Academy of Sorcery. This amulet is hence also, an important preservation of the Wicha and the Artistic Style of Olden Days Amulet making. Preserving the Lineage and the Magick of the Dtamnak Dtak Sila Khao Or. 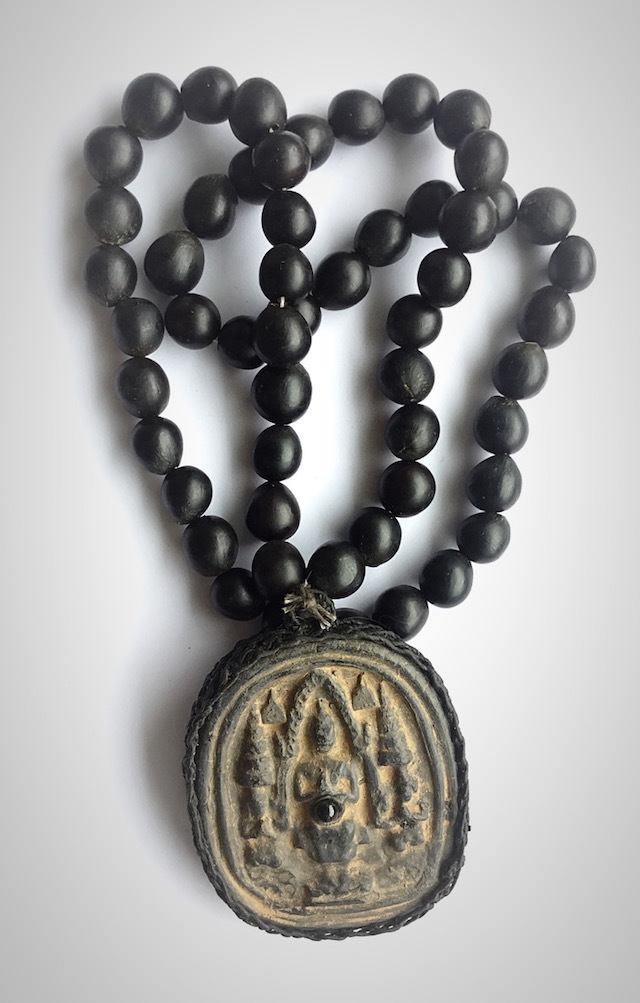 This rosary is also an Amulet in its own right, with the Pra Yord Khun Pol attached, which is an image of a Buddha in standing position with palms together flaring Civara robe behind, and two kneeling Devas on either side of the Buddha in attendance. The Devas are crowned with a Chatra Parasol over their heads. Pra Yord Khun Pol bestows primarily Serm Yos Status Increase, Klaew Klaad and Kong Grapan Chadtri Protective Influence, and Serm Duang Karma Improvement. 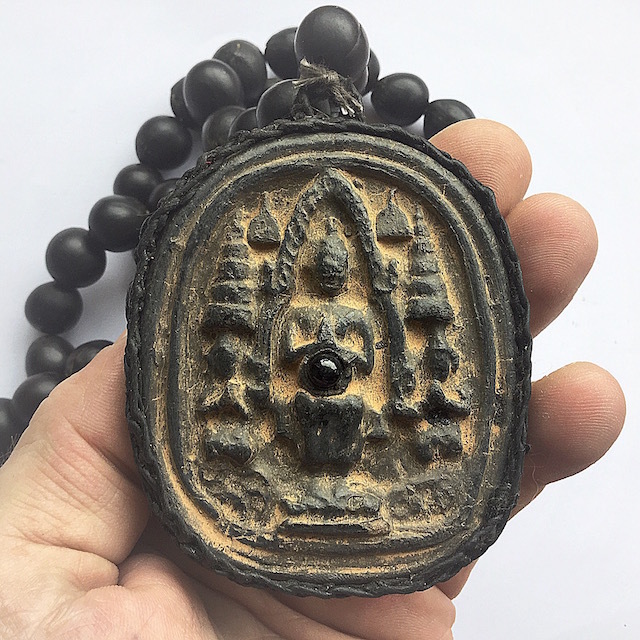 This rosary necklace and amulet are bound with sturdy black cord. The necklace measures around 20.5 inches circumference, and will fit over a medium size persons head. Larger persons may find it could not pass over the head, as it is meant to be worn as a short necklace, and hence has 54 beads instead of the usual 108 beads. One full round of prayers would then consist of two full rounds of the rosary. Some were also made attached to 108 bead rosaries too. Both the Prakam Dee Kwai berries used for the rosaries, and the rosaries themselves afterwards have been empowered and blessed with incantations along with the Pra Yord Khun Pol amulet. 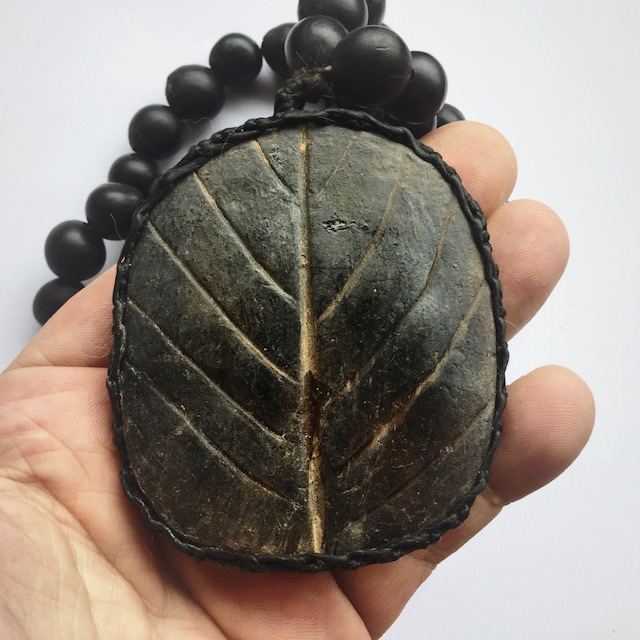 A Sacred Bodhi Leaf is embossed on the rear face of the amulet. The amulet is made from black bailan parchment, and din kakyayaks peat earth powders.

This is a most Classic amulet, and a large one indeed at that, which any true lover or collector of Thai Buddhist amulets would wish to have in their collection and of course to wear around their neck. In combination with the Prakam Dee Kwai as a sacred rosary, both objectives are attained in one, without the need for a neckchain. 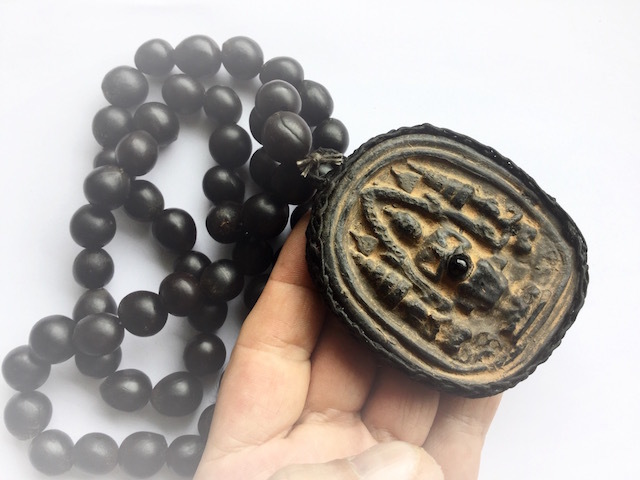 The Prakam Dee Kwai Rosary Bead + Yord Khun Pol combination is both a protective and prosperity improving amulet, worthy of Bucha, but is also a ritual or ceremonial instrument for use in Buddhist or Occult Chanting of Prayers and Incantations, as well as for meditative focus practices using repetition or counting methods. Some specific Occult Rituals require chanting an Incantation for a specific number of times, and forbids wrong counting, and so a rosary such as this is very useful in maintaining ones count and focus when performing the stricter formulas of ritual incantations.

Pra Yord Khun Pol is one of the Classic Historic Periodic Amulets which has its own 'Benjapakee' five regions set of 'Pra Niyom' preferred amulets, and is famed for its Serm Yos (Increase Status), Kong Grapan Chadtri, Klaew Klaad, and Maha Pokasap - Maha Lap powers. There are various forms seen in various regions who made the Yord Khun Pol amulet, with five of them becoming the most preferred, hence they also carry the name, 'Benja' (meaning 5) and 'Pakee' (Benjapakee). This amulet is almost identical to the original famous amulets which is now almost impossible to find, and when they can, extremely expensive and beyond most peoples reach; the Pra Yord Khun Pol amulets by the great Ajarn Chum Chai Kiree, even in the fact that they have a piece of Lek Lai Kaya Siddhi elemental substance inserted into the centre of the front face of the amulets. The rear face is identical to the original edition, with the markings, or, better said, the veins of the bodhi tree leaf. 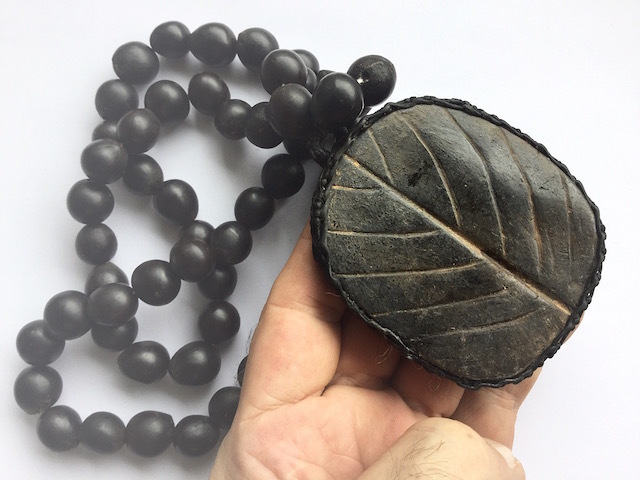 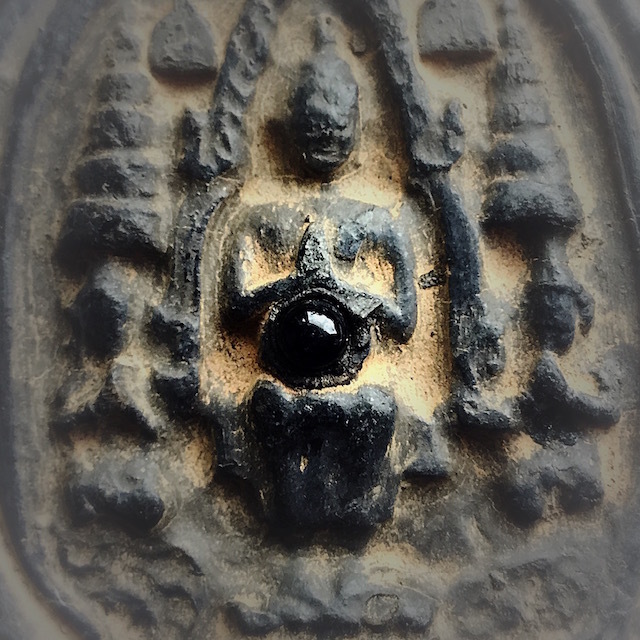 Above and Below: Close Up Macro of the Muan Sarn Sacred Powders of the Pra Yord Khun Pol Amulet. The amulets were taken from Kru Burial Chamber to be used for the Rosaries in this Edition.

The Prakam Dee Kwai bead (Met Prakam Dee Kwai), is a magical berry from a particular rare kind of soap berry tree found in the deep undisturbed forests, which is believed to have a resident tree spirit Deva dwelliing within it. It is said that it possesses magic that will listen to you, and work towards fulfilling your wishes, increase your admirers and helpers, Wealth and Material Possessions,and bestow auspicious Blessings from the Triple Gem upon you, protect and nurture you. It will help to prevent dangers, as well as increase your luck and fortune. 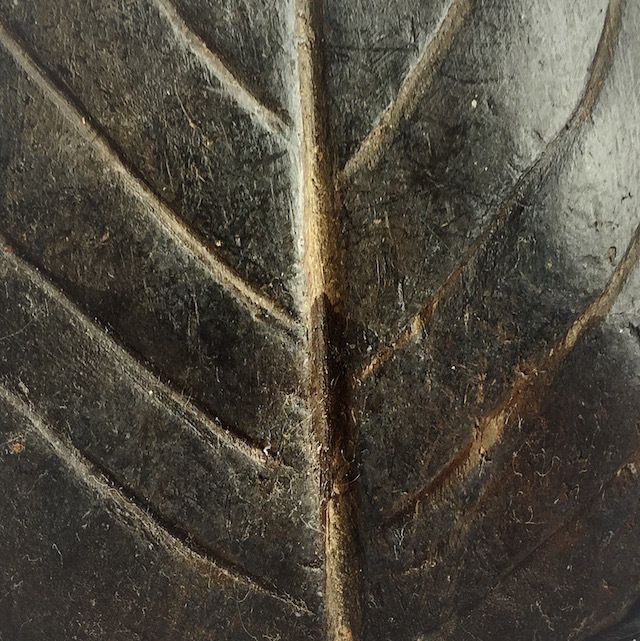 The Prakam Dee Kwai is also known for its anti black magick powers, and for Klaew Klaad evasion of dangers, and the ability to ward off the evil eye. It maintains health and wards off illnesses. A great blessing ceremony was performed by the current living master of the Khao Or tradition, Luang Por Prohm, at the temple of Wat Ban Suan

Luang Por Prohm's Wicha Are indeed many fold, For he has mustered many different forms of magic spells invocations and mastery of elemental magic and forces. Developing his psychic powers and practicing The path of Kammathana forest tradition Buddhism, Developing his meditative skill with the Practicel of Vipassana. 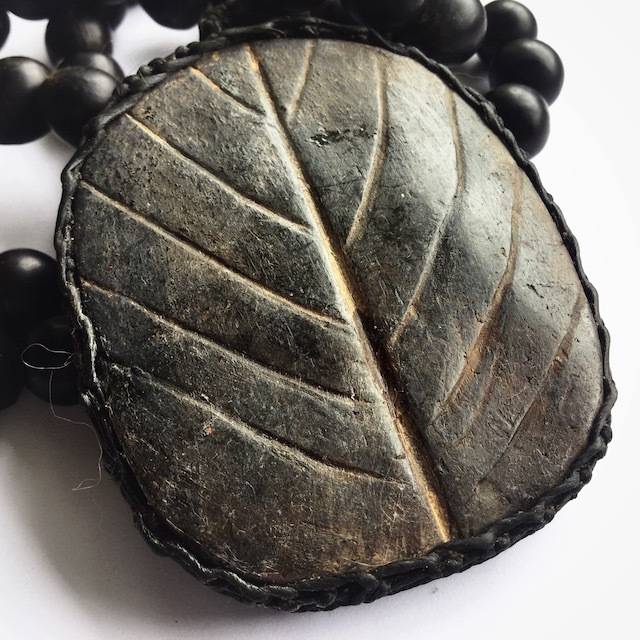 Above; Bodhi Leaf Yantra on rear face of amulet

Luang Por Prohm Has truly mastered a large array of different forms of sorcery and ways of invoking and inviting Devas, and spirits, to dwell within the various forms of animals and deities, and other effigies which Luang Por Prohm Has learned to master, and control. 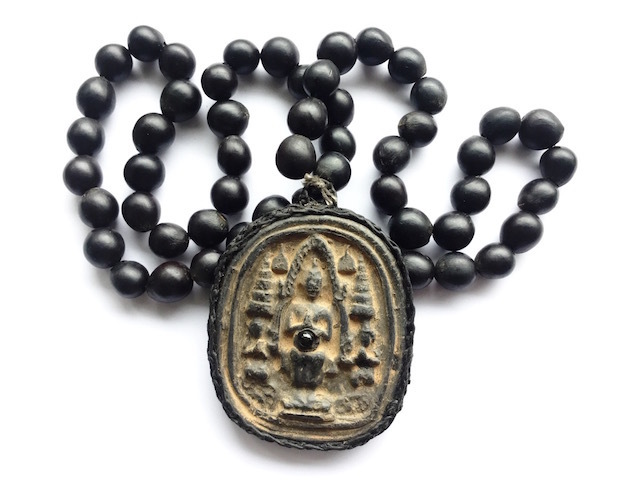 It is only in the last 30 years that Thai people have begun to adopt the various various practices, such as Prayer Water making, and healing using Midmor, which were in the olden days reserved for the use of High Ceremony, Performed by ordained Masters Be they Brahman lay masters or ordained Bikkhus. 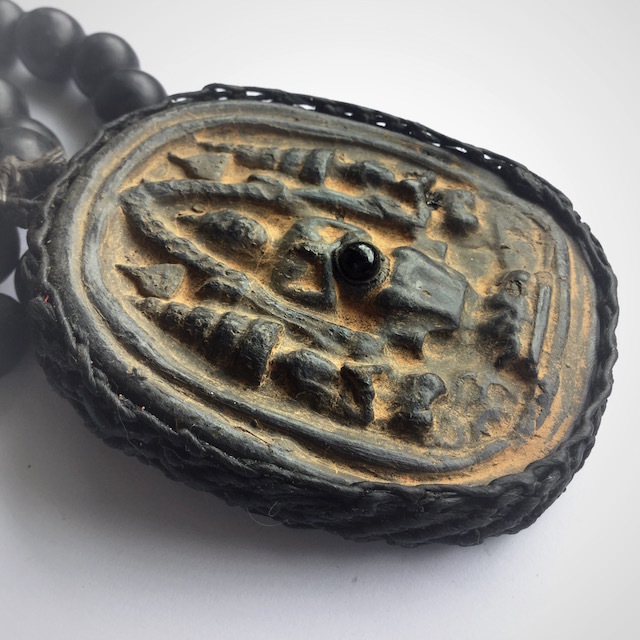 Ritual Magic is no Longer reserved for the Elite Masters, and the Ordained Monks, and is becoming ever more commonly studied and practiced by Layperson. This makes sense, for one does not need to be ordained, or a member of a particular religion, to be able to develop one's powers of mind, and to study Occult Incantations.

Use the Maha Namasakara (Namo Dtassa x 3), and Kata Aaaratana Pra Krueang to Bucha and beseech wish fulfilment from the Prakam Dee Kwai Yord Khun Pol - you can practice this using the tutorial in the below youtube video.

Met Prakam Dee Kwai translates as 'Rosary Beads of Buffalo Gall', but has nothing to do with buffaloes. In fact, the Prakam Dee Kwai is a kind of forest berry, known as the Soap Nut tree (Sapindus Emarginatus). In Malaysia it is known as the Rerak. It is a tree which grows in many areas of South-East Asia, and has various strains. 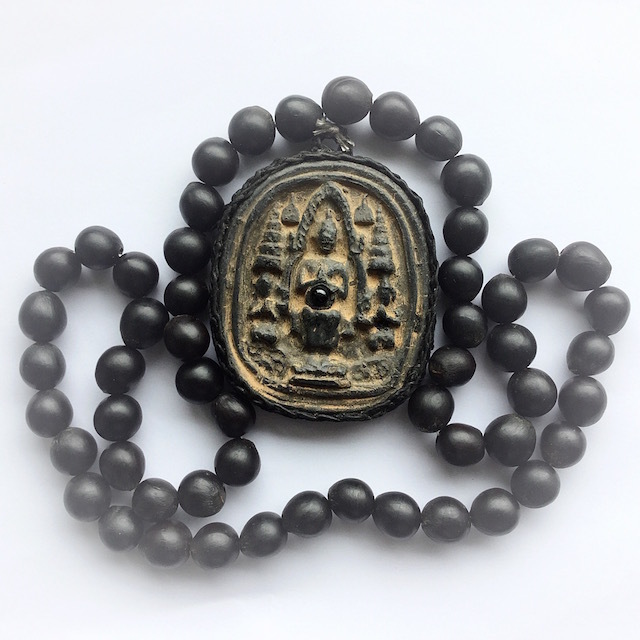 They are used indeed for making magically empowered rosaries, by drying the berries, and make holes through them to tie into rosary beads. Obviously the forest monk on Tudong wandering, or the Lersi Hermit of Olden Days would have had no access to the commercial rosary, so they would make a rosary from these berries.

Apart from being used in Buddha Magic, for making Amulets and Rosaries, and insertion into other amulets, or for grinding into sacred powders, the berries, leaves, flowers and the wood extracts are also used for herbal medicinal purposes. Amongst its medicinal uses is to clean the blood, and to counteract all kinds of poisons and blood poisoning, and reduce gastric acidity. 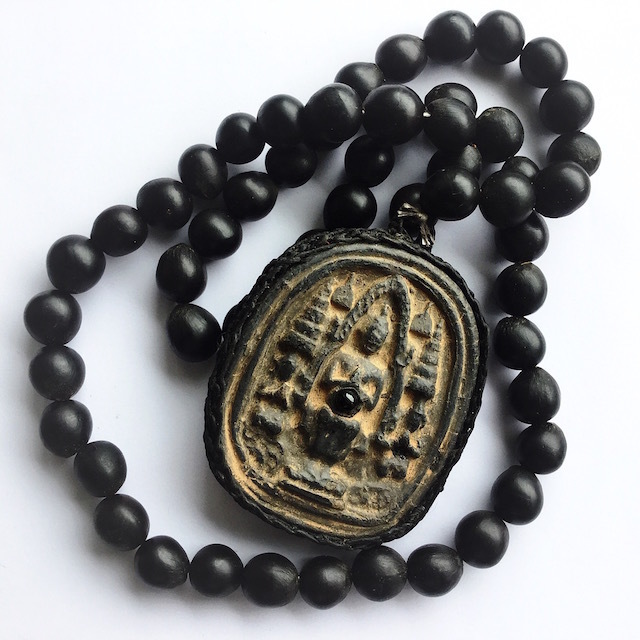 Due to the nature of the Prakam Dee Kwai, and its use by ancient forest wanderer guru masters as rosary beads, this amulet is extremely useful also as an object of meditative focus, and good for meditators to carry.

You can focus on a Nimitta of Pra Yord Khun Pol Buddha, or on the rosary beads, which are magical in their nature. Imagine the spherical prakam dee kwai bead in your mind as each bead passes through your fingers, and see it become a crystalline light - hold it until it shines with light with your eyes closed. Do not let it drift. 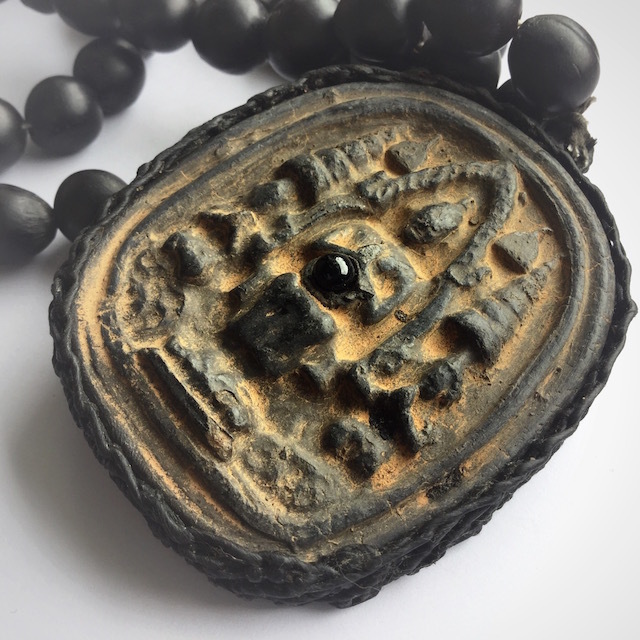 If you can master holding the spherical orb of light in your mind, then practice making it grow bigger and smaller, from a pinprick of light, to a large sphere filling your vision. If you attain Jhanic Absorption Access with this method, then always remember to dedicate merits of having gained access to dead and living relatives, and all beings everywhere. If you attain meditative access, you can empower the wishes you make from the Prakam Dee Kwai, with these meditative attainments. 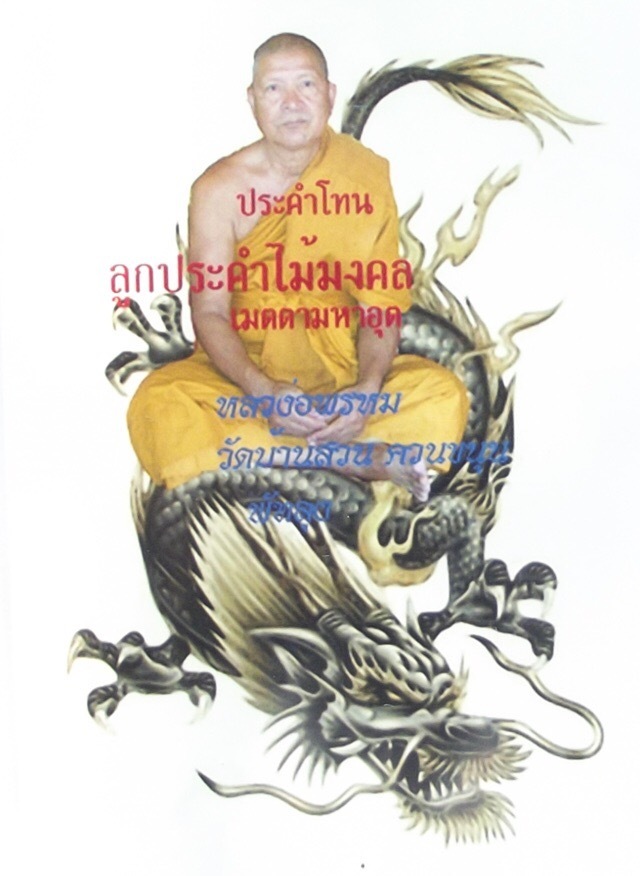 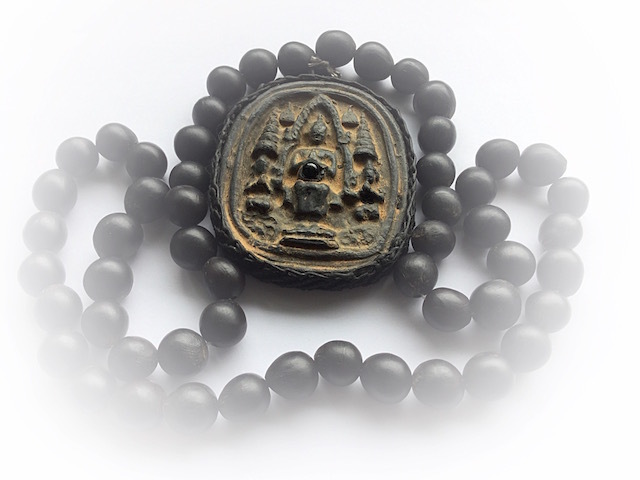