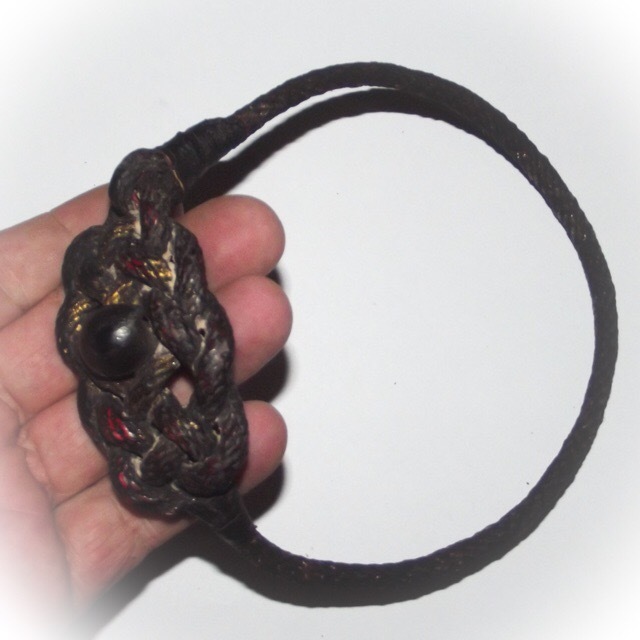 The Prajiad Armband was an essential part of the occult and ceremonial armory and regalia of the ancient Warrior of Siam. The Warriors of Olden Days used both scientific weaponry such as swords, knives, maces, lances, clubs and other weaponry and armour, but also armed themselves with a highly practiced and memorised repertoire of Magical Spells and Sorcery, to protect and aid in winning the battle.

The Wicha Kong Grapan and Klaew Klaad are both directly derived from the Warrior Clans, who recieved these Wicha from their Lersi Kroo Ba Ajarn, for their own protection. 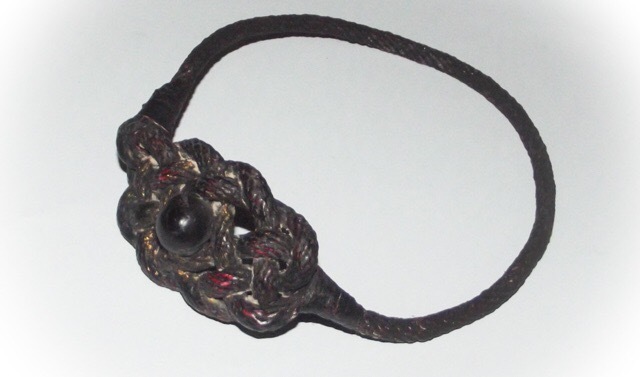 The Prajiad is often confused with the Mongkol, by those who do not know Muay Thai sports. The Mongkol is a head-dress bound with Sinjana Cords from ritual ceremonies, whereas the Prajiad is an arm band, both being made from bound Sorceror's cord or Yantra cloth respectively. There are many other pieces of Regalia and Ritual Armory, such as the Kard Chueak hand cords and Pha Khaw Ma cloth, and the Hwaen Pra Pirod Magic ring of Protection, which were used in Olden Days in Battle, and are stlll used in the Wai Kroo ceremonies of Muay Thai Warriors to this day.

The Prajiad is in Muay Thai sports now a ceremonial and Cultural piece of regalia but is in truth a Sorcerous Invention, whose Origin lies in the Occult, more than the Cultural aspect.

This Prajiad is made from 'Chueak Akom' Sorcerous Cord, which have been made into thread from cut up pieces of Pha Yant, made from 'Pha Salu' (a raw linen that is finely threaded, or 'Pha Dip' (untreated linen). The cloth can be made from white or red cloth, which is then cut into a triangular shape, and Sacred Geometry of Yantra along with Numerology Spells and Astrological Sigils are inscribed along with the chanting and blowing of Incantations. 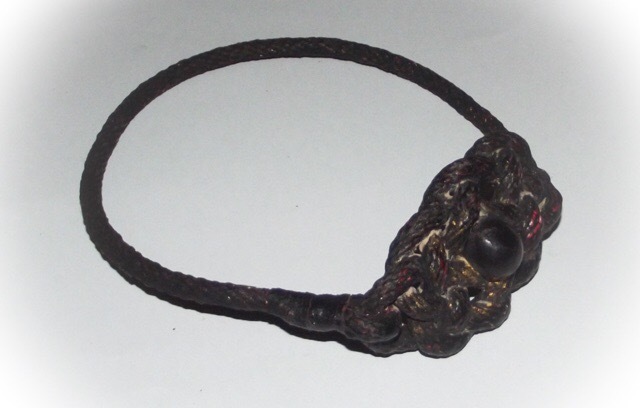 The Yantra within the Prajiad, are usually empowered with spells that are leaning towards Maha Amnaj (commanding power and influence), Kong Grapan Chadtri Invincibility, Maha Ud Gunstopper, and Klaew Klaad Evasive Magic, as is logical for Warrior Sorcery.

There may be Khom Agkhara Sanskrit and/or Devanaghiri (Angelic Script) inscribed around and within the Yantra, depending on the Wicha of the Sorceror. 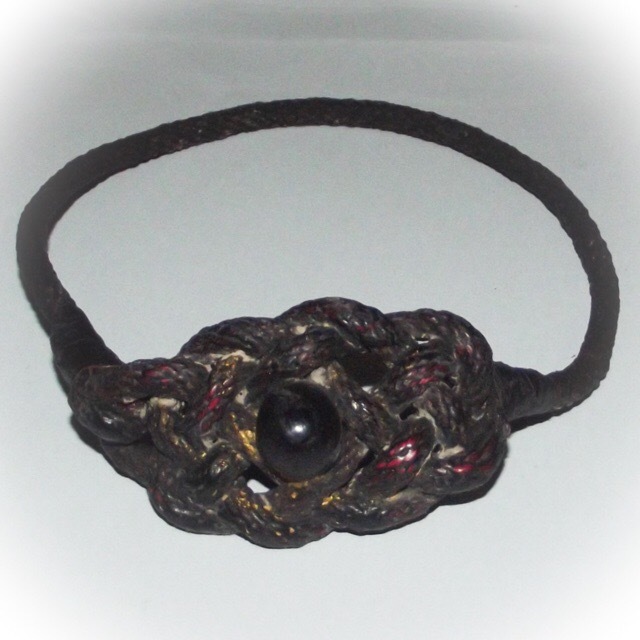 The cloth is then cut into strips and woven into a ring, with a complex knotwork crown, Sometimes red or black lacquer is soaked into the Prajiad, to harden and preserve the Prajiad for long time 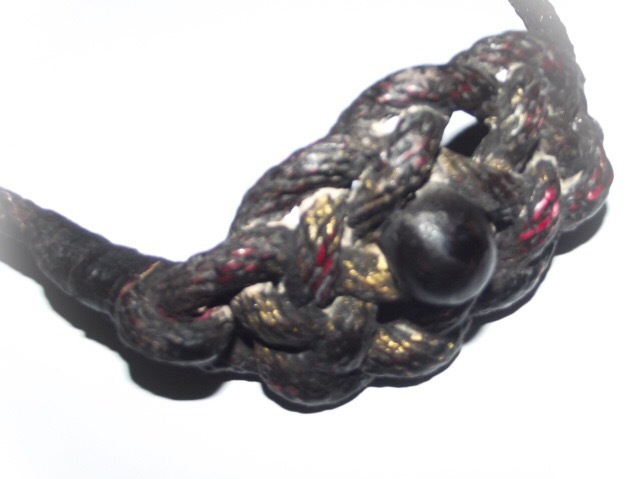 Above; 'Hua Hwaen Pirod' Fiery Ring of Protection and Evasion Spell bound into a knotwork crown.

The knot-work of the cord binding and the crown are in themselves spells which use sacred geometry to manifest their magic, and posses high Kong Grapan Chadtri and Maha Ud power, in their self-enclosing knots, which have been bound with Ancient Khmer Incantations. 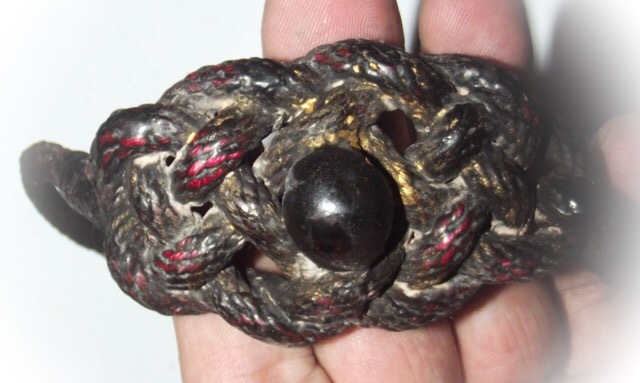 There are various variations to the Wicha Prajiad Akom, ranging from the use of insertion of herb, dipping in lacquer, insetrting Takrut spells within the cloth. Sometimes some Masters will insert Bia Gae shells, to ward of Black Magic, maintain strength and health, and Kong Grapan Chadtri Protection. Different Masters may decide to insert different amulets within the Prajiad, depending on their specific purposes. 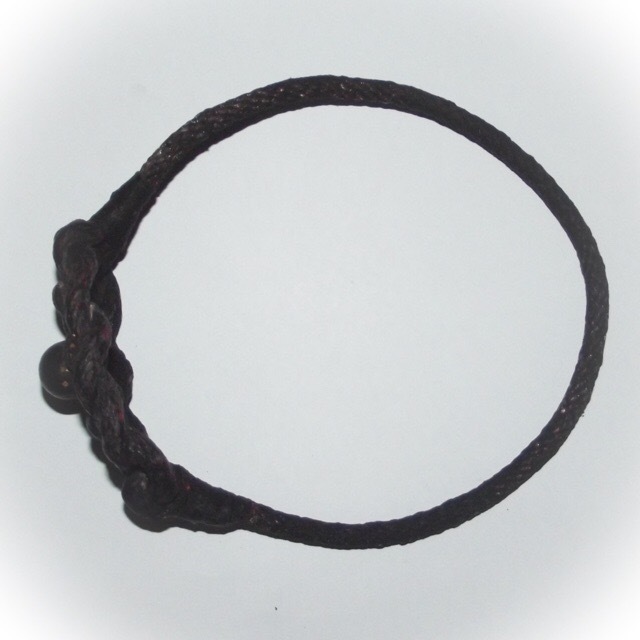 Above; Prajiad Armbands of Olden Days

Dipped in sacred herbal resin lacquer, with a 'Met Prakam Dee Kwai' berry bead inserted into the crown of the armband. The Wicha Bia Gae is hence additionally imbued within the amulet, invoking all of its magickal strength to empower the Prajiad with even more protective influence.

Met Prakam Dee Kwai translates as 'Rosary Beads of Buffalo Gall', but has nothing to do with buffaloes. In fact, the Prakam Dee Kwai is a kind of forest berry, known as the Soap Nut tree (Sapindus Emarginatus). In Malaysia it is known as the Rerak. It is a tree which grows in many areas of South-East Asia, and has various strains. They are used indeed for making magically empowered rosaries, by drying the berries, and make holes through them to tie into rosary beads. Obviously the forest monk on Tudong wandering, or the Lersi Hermit of Olden Days would have had no access to the commercial rosary, so they would make a rosary from these berries.

Apart from being used in Buddha Magic for making Rosaries, the berries, leaves, flowers and the wood extracts are all used for herbal medicinal purposes to clean the blood, and to counteract all kinds of poisons and blood poisoning, and reduce gastric acidity. 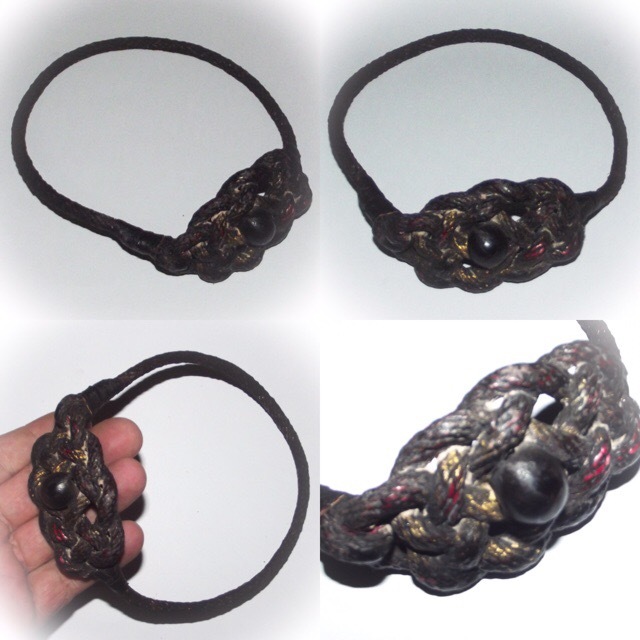