This edition of 'Mala' Rosary has been released by Luang Por Prohm with centralized 'Pra Pid Ta' Closed Eyes Buddha. Because Mala Rosaries are constructed primarily for meditation by way of mantra repitition, the Pra Pid Ta is an excellent choice of elaborate "Guru Bead". 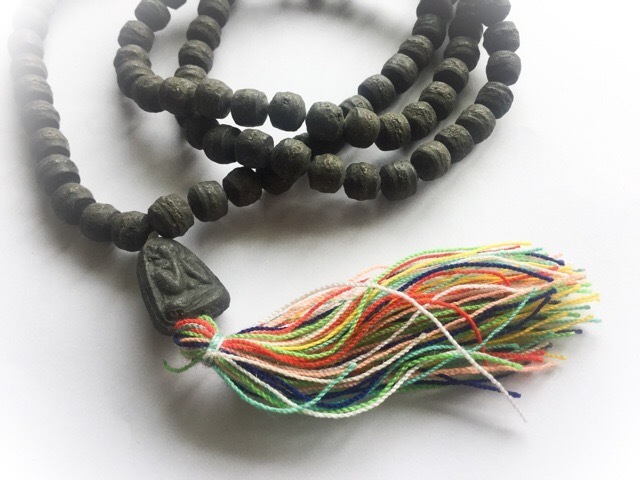 Some were made with grey and red cords, others with multi colored cords. There were also some rosaries made with solid wooden beads instead of 'Nuea Wan' Herbal Powders, also with Pra Pid Ta attached.

The Pra Pid Ta or (Pra Sangkachai, Hotei, Budai, Maitreya) Bodhisatta is used as the object of veneration for this rosary due to his selfless and extreme concentration which rises from and gives further rise to Metta Mahaniyom Loving Kindness and Maha Sanaeh attractablility. Pra Pid Ta covering his eyes (and suggestively all orifices by which physical stimulation can occur) wards of the disturbance and influence of physical phenomena. Thereby leaving only 'Citta' mind for concentration and progress toward arahantship and Bodhi mind. 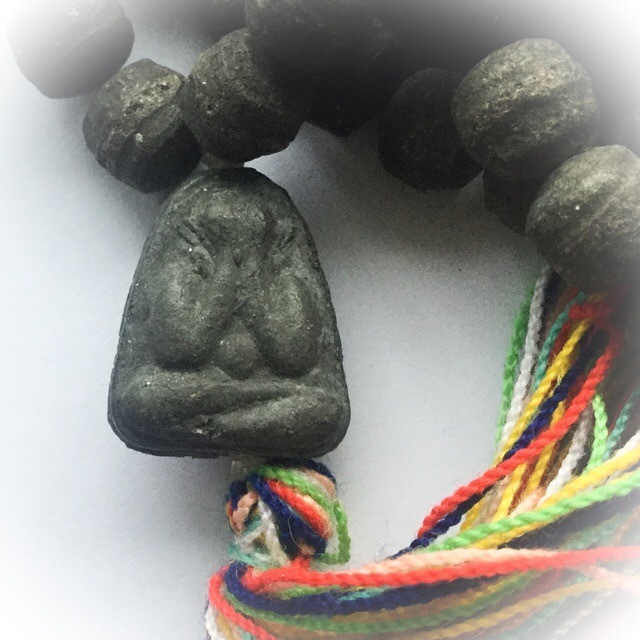 The mala string should be composed of three, five or nine threads, (or a combination of all 18) symbolizing the Three Jewels (Buddha, Dharma, Sangha), the five Dhyani Buddhas (Vairocana, Akshobhya, Ratnasambhava, Amitabha, Amoghasiddhi) and their wisdoms or the nine yanas or Buddha Vajradhara and eight Bodhisattvas. The large main bead, called the Guru bead, symbolizes the Guru, from whom one has received the mantra one is reciting, (in this case Luang Por Prom). 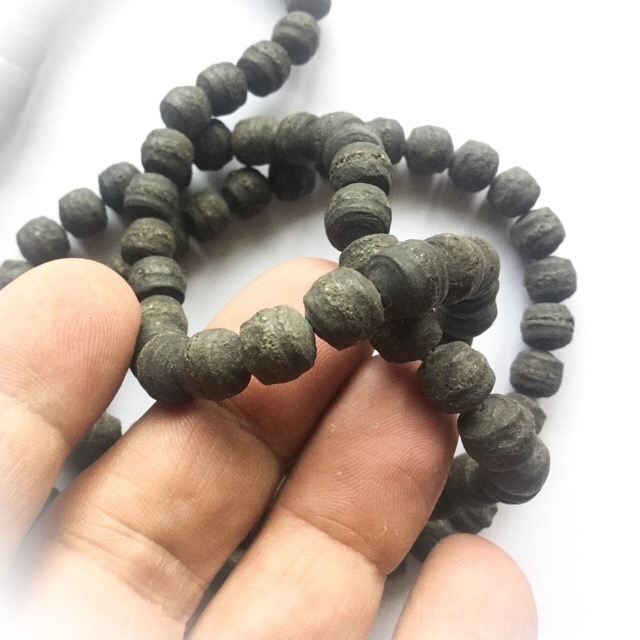 Mantras are typically repeated hundreds or even thousands of times. The mala is used so that one can focus on the meaning or sound of the mantra rather than counting its repetitions. One repetition is usually said for each bead while turning the thumb clockwise around each bead, though some traditions or practices may call for counterclockwise motion or specific hand and finger usage. When arriving at the Guru bead, both Hindus and Buddhists traditionally turn the mala around and then go back in the opposing direction. Within the Buddhist tradition, this repetition of the beads serves to remind practitioners of the teaching that it is possible to break the cycle of birth and death. 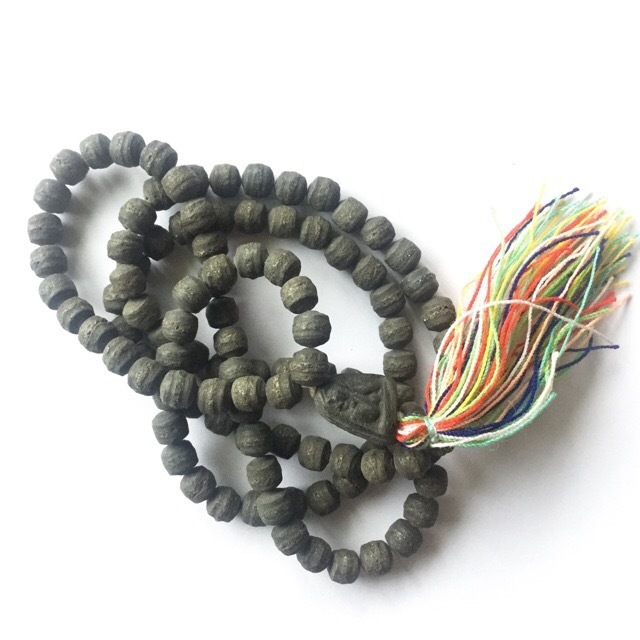 There are numerous explanations why there are 108 beads, with the number 108 bearing special religious significance in a number of Hindu and Buddhist traditions. In traditional Buddhist thought, people are said to have 108 afflictions or kleshas. There are six senses (sight, sound, smell, taste, touch, and consciousness) multiplied by three reactions (positive, negative, or indifference) making 18 "feelings." Each of these feelings can be either "attached to pleasure or detached from pleasure" making 36 "passions", each of which may be manifested in the past, present, or future. All the combinations of all these things makes a total of 108. In Mahayana and Vajrayana Buddhism, it is believed that the Guru Padma Sambhava took 108 Sacred Buddhist Texts, or Teachings, and Termas' (Mysterious Relics with Sacred Truths Hidden within) from India, and hid them around Tibet and the Himalayas.

108 Dhammas to discover. He did this because he saw a vision of the Future that Buddhism would be destroyed in India, and so he took the Termas to Tibet to keep safe, until a future date when they would slowly be incovered and discovered in the Future. 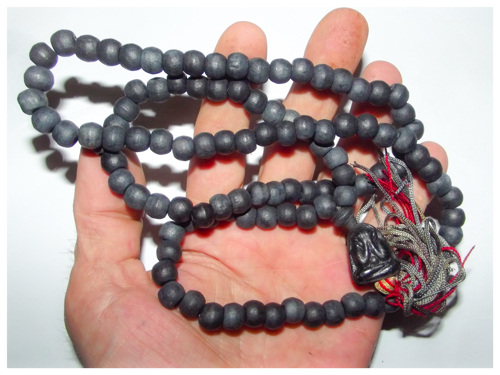 Please note, each rosary is hand made and can differ slightly from the picture, however all are equal in quality and beauty. colors of cords can also differ from rosary to rosary. You should therefore not set your sights on an exact likeness to the picture. 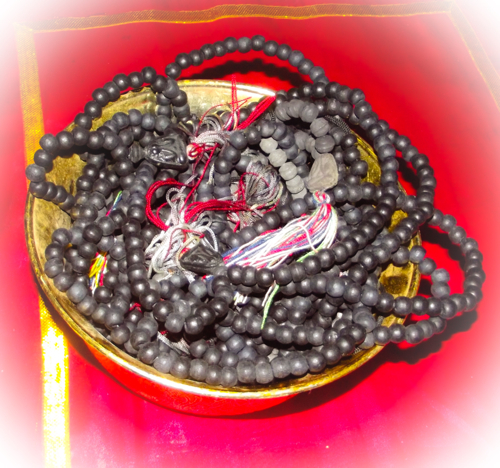 Wat Ban Suan is the Home of Khao Or Magic and the Root Lineage Center of the Great Master of Khao or Magic, Luang Por Kong. Luang Por Prohm is the Looksit, and Continuation of the Khao Or Tradition, the Greatest and most Famous Southern School of Sorcery in Thailand. He learned his Wicha from Luang Por Kong directly, who was in fact also the Kroo ba Ajarn in Wicha Saiyasart (Sorcery) to Ajarn Iad of Wat Don Sala.

Both temples of Wat Don Sala (Wat Por Tan Nam), and Wat Ban Suan, are Pure Khao or Sorcery schools of Magic, and derived from the same Kroo Ba Ajarn, Luang Por Kong. Luang Por Prohm was present and assisted in empowerments of many famous editions of earler Khao Or amulets too, including the Pra Pong Chum Chai Kiree of Ajarn Chum which had Ajarn Tong Tao and Ajarn Kong on each face, so famous Kong Grapan amulet from 2512 BE. 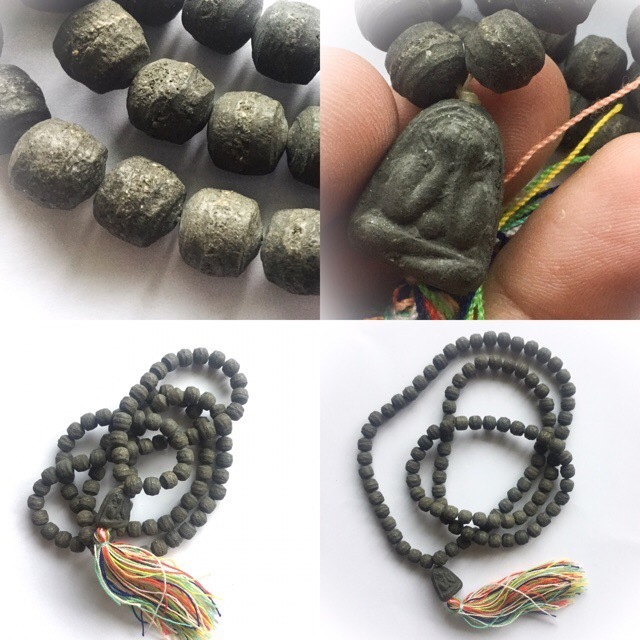