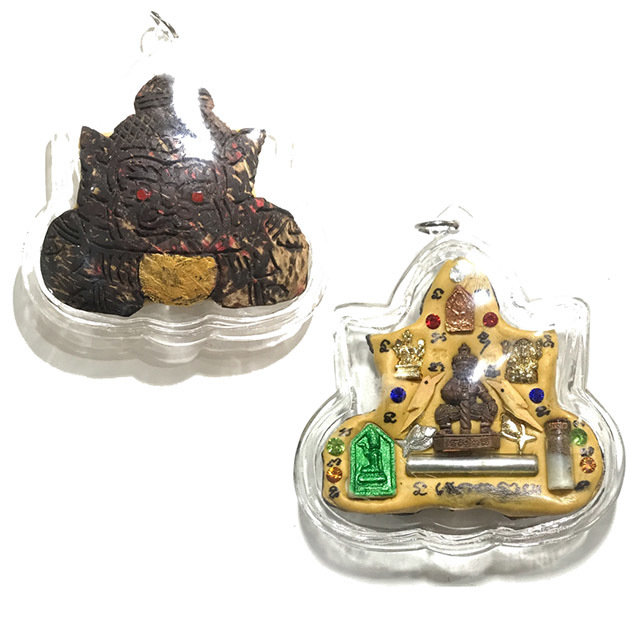 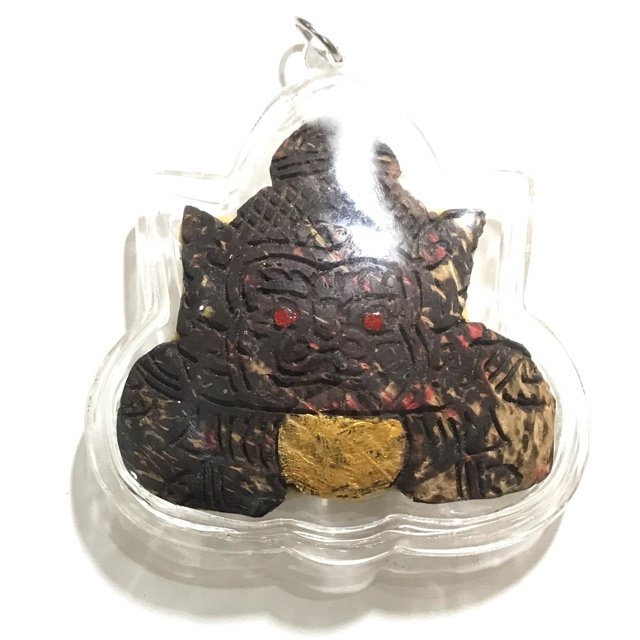 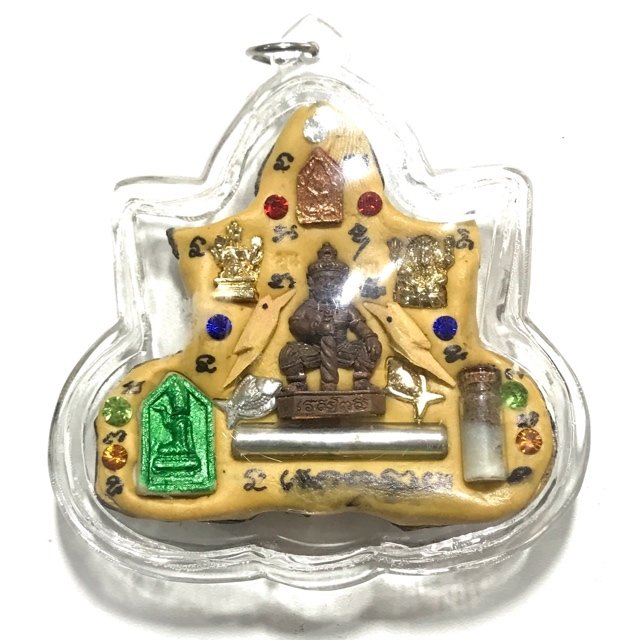 Ta Poon is a reclusive Lay Master who has retreated to the forest and uses this name as an assumed name to avoid attention. He was blessed with being the apprentice of Luang Phu Suang, learning Wicha from him and a number of associated Adept Sorcerors, of both Ordained and Laymaster lineages. He recieved Wicha from a total of 295 different Adept Mages, Sorcerors, and Necromancers. The majority of his training however, came through the lower Northern Region of Thailand through the Luang Por Derm (Wat Nong Po) Lineage, and the Magical Master Lineage of Luang Por Tob of Wat Chon Daen. 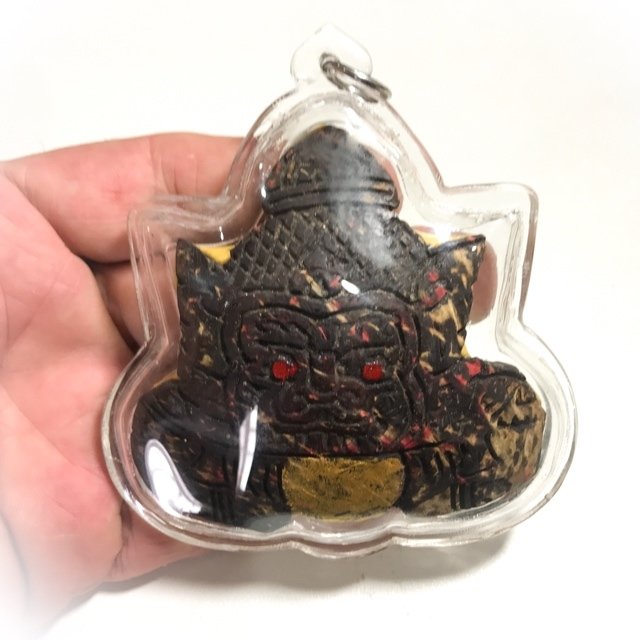 Below, the immense quantity of individually empowered amulets and magical items inserted into the Maha Lap Powders of the rear face of this hand carved one eye coconut Rahu Eclipse God amulet can be seen filling the entire rear face of this Jumbo sized Pra Rahu Kala Ta Diaw amulet. Apart from the blessings of Pra Rahu, we can see that this very special Ongk Kroo Masterpiece version affords the protection and blessings of other Vedic Gods such as Ganesha and Brahma, and the powerful Maha Amnaj Maha Pokasap and anti black magick powers of Taw Waes Suwan (Kubera) the Wealthy Asura King of the Northern Quarter. The Taw Waes Suwan statuette also has a Takrut within its base with Sacred Powder filling. 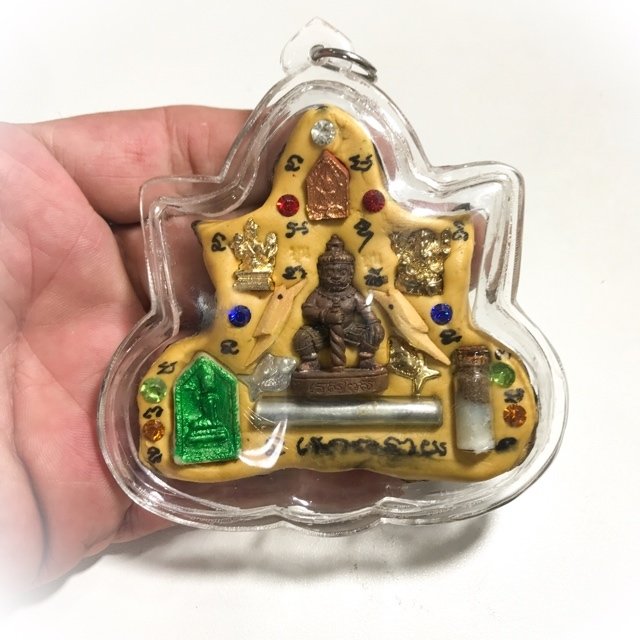 The Metta Maha Sanaeh of the Khun Phaen and Nang Kwak bring Prosperity and Popularity and Convincing Speech, improving Business and Social Affairs. Brahma Protects and Brings Prosperity, and Ganesha Paves the way for Prosperity and Success and removes all Obstacles, in conjunction with Pra Rahu removing Karmic Obstacles and Improving the Astrological Circumstances, and Shielding against bad luck, backstabbers and enemies. The Sariga Birds and Pla Tapian increase the Metta Maha Pokasap Maha Sanaeh Power Further, and a small Phial of Nam Man Prai Oil serum imbues immense Prai Psychic Power to the amulet through its consecration.

When asked about the origins of his Manyfold, and Powerful Wicha, Ta Poon recounts of the time he was ordained as a Samanera, ordained by the Great and Mysterious Luang Phu Suang Tewada Len Din himself, and that he remained practiciing under the tutelage of Luang Phu Suang for a period of 15 years. 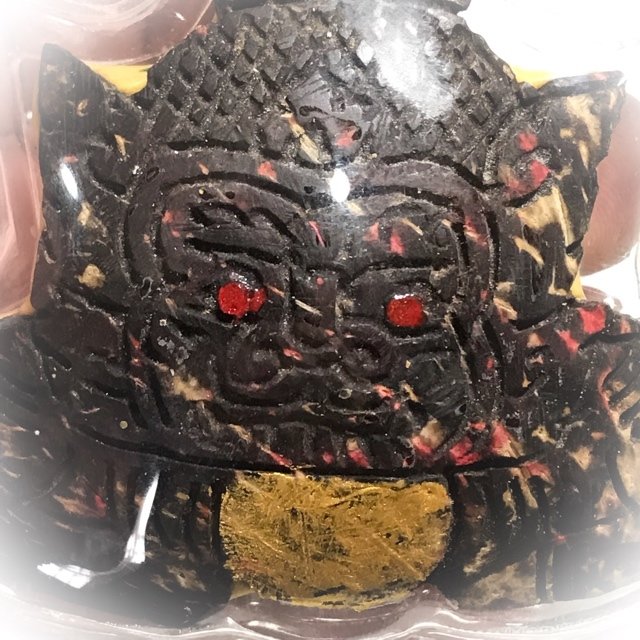 As far as Wicha Metta Mahaniyom and Maha Sanaeh are concerned, Ta Poon had wives in every province through which he had traveled, or ever settled, and it is said that despite his old age, that, his last wife which he took was only 27 years old. This was as he was already at the ripe old age of 84 years old. 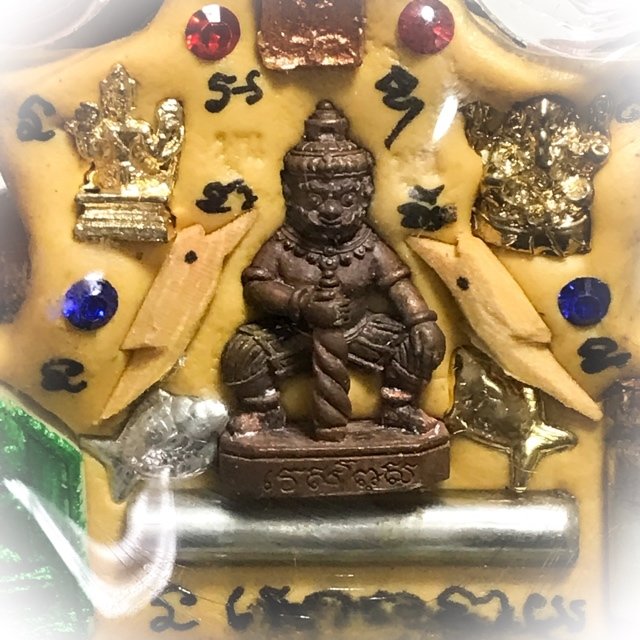 These days are however, over. He now lives secretly under an assumed nickname (Ta Poon) in the deep forest in the north eastern region near the border land areas of Thailand between Cambodia and Laos. Very few people know of his whereabouts, but those people still travel into the deep forest to find him and beseech him for his famously powerful magical Sorcery Spells and blessings. He still performs Holy Water Blessiings, Exorcisms, and creates special Takrut Spells and empowers an array of amulets for those who are able to find him, and are able to find his favor. 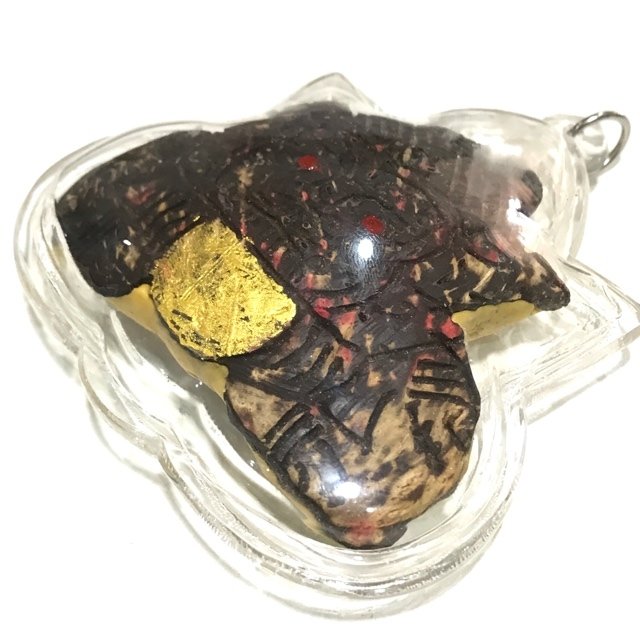 'Pra Rahu' is the Deity of Fate and Fortune, the Astrological Ruler of the Dark Phases of the Zodiac. Whoever tries to Kill Rahu is Thwarted, he just remains Alive, being an 'Immortal' God. 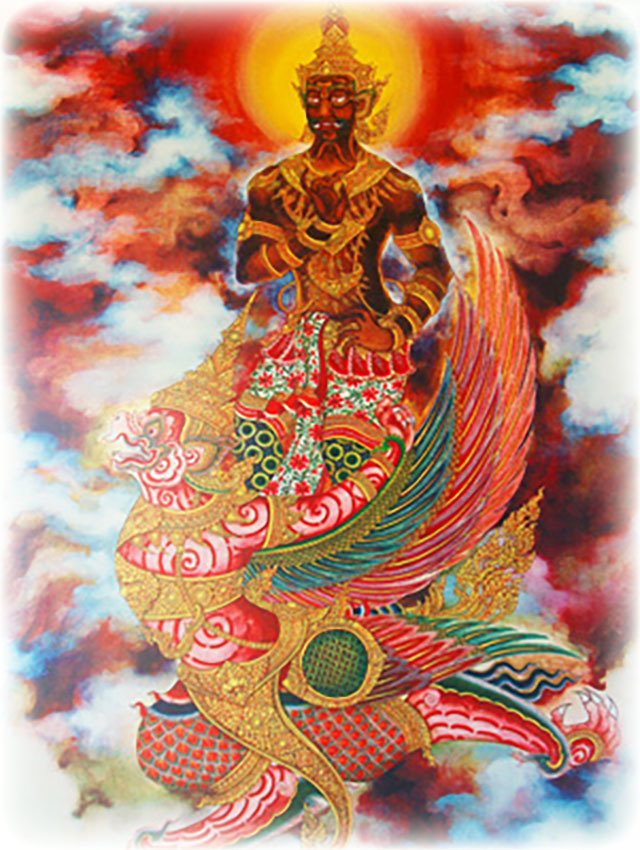 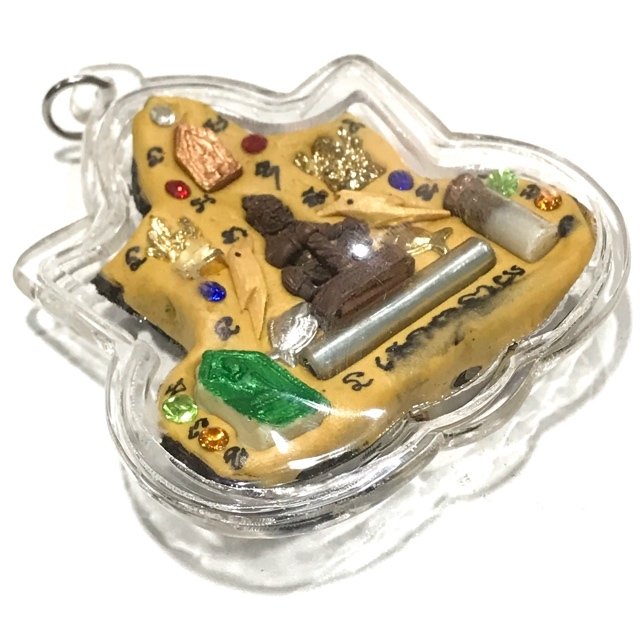 Pra Rahu is able to remove obstacles of bad luck, to protect against black magic, and to defeat one's enemies. Hence, the faithful devotees of this deity will receive Pra Rahu's auspicious blessings of protection, luck, and prosperity.

If you feel that your Fate and Horoscope is not Auspicious, then it could be that Pra Rahu is interfering. You can solve this problem by making Bucha offerings to Pra Rahu every Wednesday; 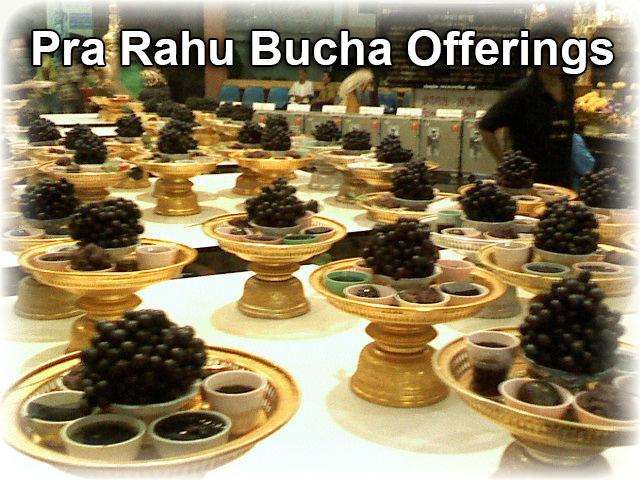 To worship Pra Rahu during daytime, one should use the kata Surya Buppaa:

When performing bucha to Pra Rahu during the night time, one has to chant the kata Jantrabupbhaa:

When you begin to Bucha Rahu Deity, you should make the first ever session in the evening of a Wednesday (any time from 7 pm onwards).After you have done this once, you can make Bucha in the daytime if you wish, but the first time you must include the food offerings of black foods as well as the black incense. The second time onwards only the incense is necessary in the daytime if it is a lot of trouble to get the food offerings. 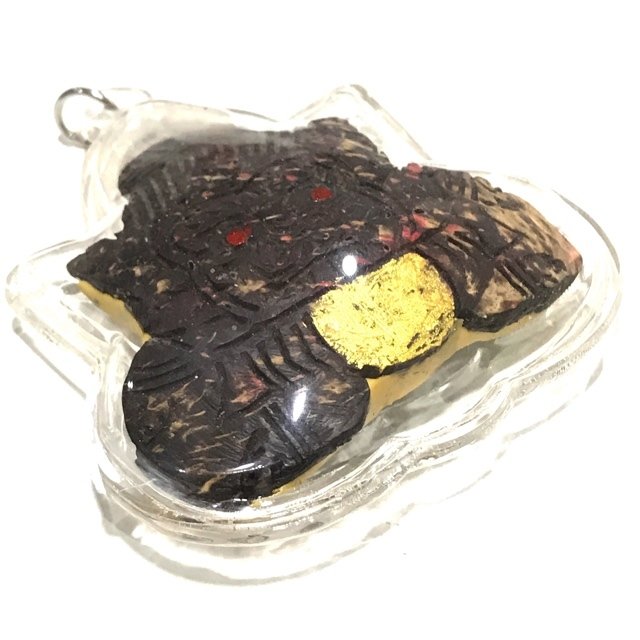 Kata for the supplementary Wicha/Amulets inserted into rear face

Story of and Kata for Taw Waes Suwan 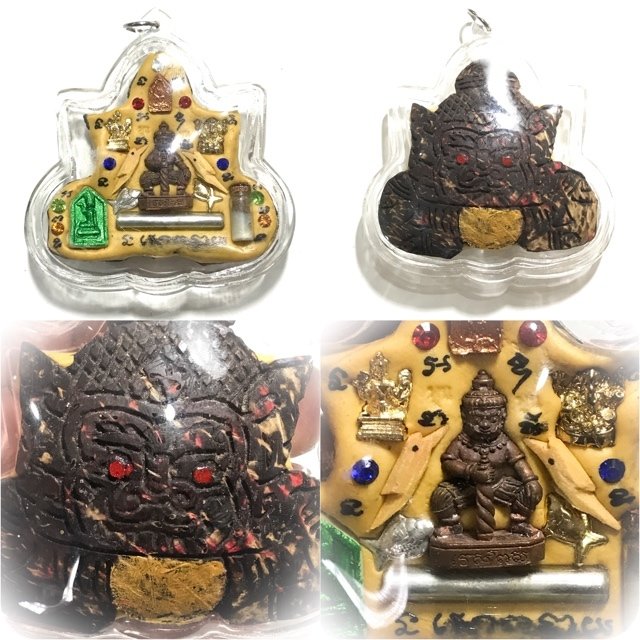