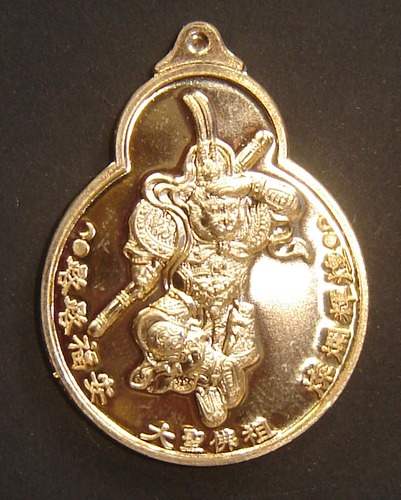 This Thai-Chinese 'Jao Por Heng Jia' Deity Image was made as a Bucha Statue and as Deity Coin amulets, in two different postures for different magical blessings;

This 'Chalong Sae Yid' edition of luxury collectors edition coin amulets are the first ever making of this Deity in amulet or Bucha form for the Public.This Model is the 'Pang Chana' (Winning) posture. For Gamblers this is an obvious choice of amulet. 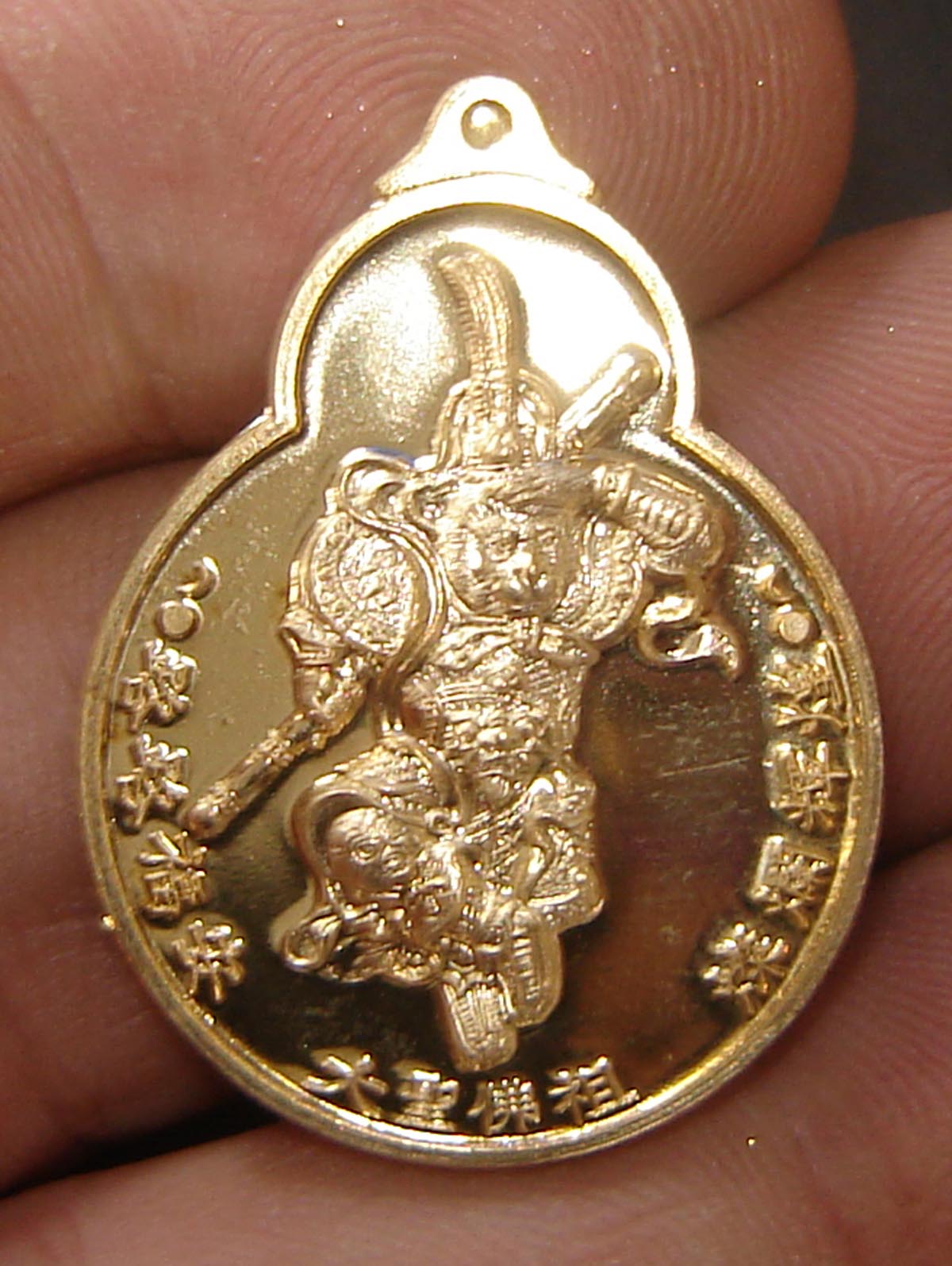 They were made in two different postures; Pang Samrej = Success and Prosperity, and, 'Pang Chana' = Winning. 2940 coins were made in this particular Pim/Model, which is the 'Pang Chana' Pim (model), and is made from 'Nuea Chanuan Loha Taat' (7 Sacred iron Alloys and relics, made from sacred Bucha statues and metallic relics). Nuea Chanuan is an attractive option for those who value highly charged magical metals more than aesthetic outer surface. 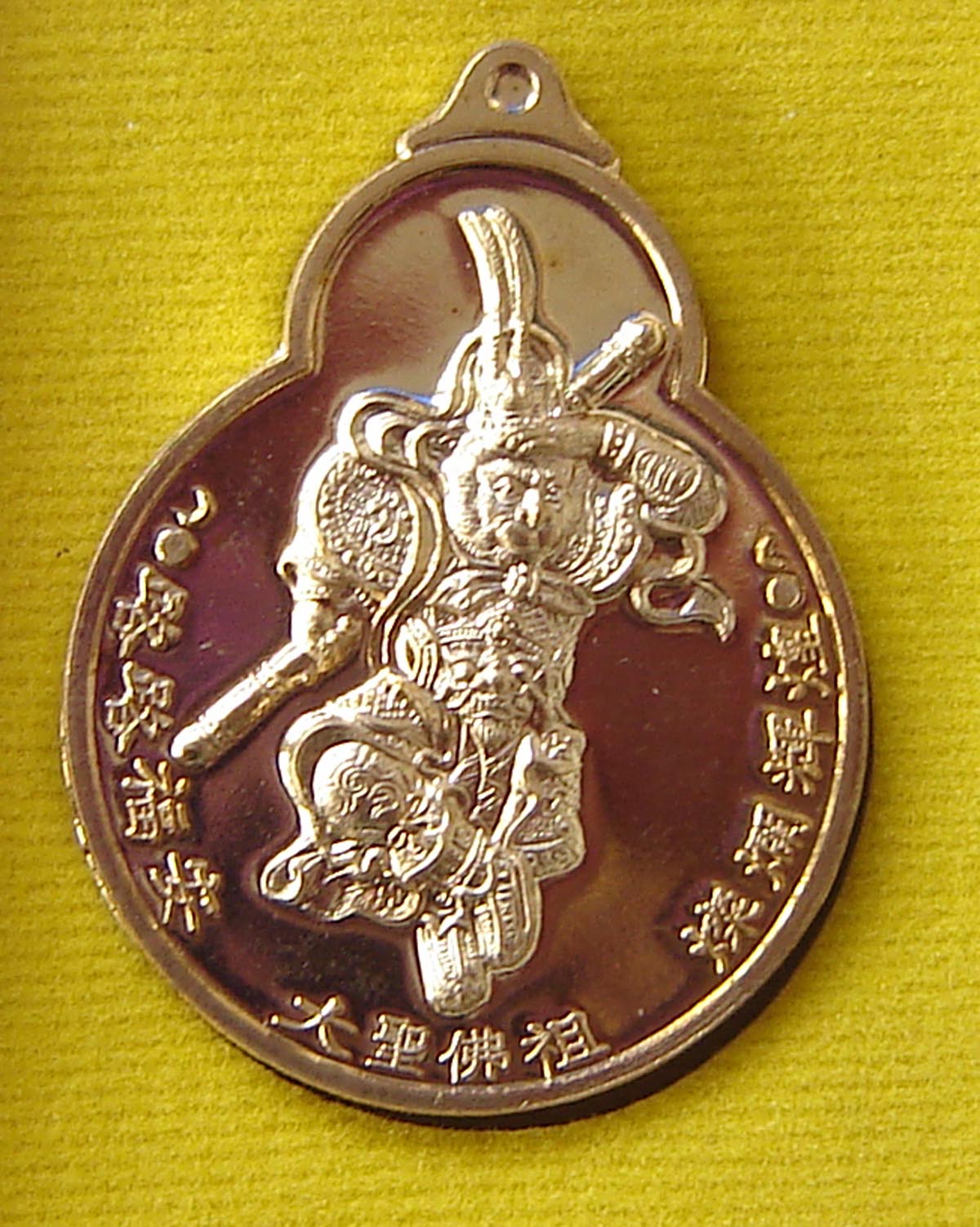 It is a fact that Nuea Chanuan Loha Taat contains the accumulated power and magical aura of all the previous statues and amulets which were smelted into the sacred metals. These metals are a perfect conductor for magical power and Prana energy, and thus, is one of the most powerful physical mediums for amulet empowerment. All sacred metals used for the making of this edition of amulets were smelted using ancient pieces of sacred metals and amulets, statues etc, to re-smelt into new amulets and Buchas.

This is the Traditional way of making 'Chanuan Muan Sarn' (sacred mixture for amulets). The strange golden bronze sheen reflects the colors of the surroundings so much, that it is difficult to capture the true color of Nuea Loha Taat metal, we must therefore state that the photos are representative of craftsmanship and quality design, but do not display the exact true color of this item. It is a more golden bronze color than copper in sunlight, but seems to change color as you move through different colored surroundings.

Its color has a similar tone to 'Nuea Samrit' which is a preferred quality metal finish for upper range amulets, and one of the higher class quality metals used in the smelting of fine Buddha Images. 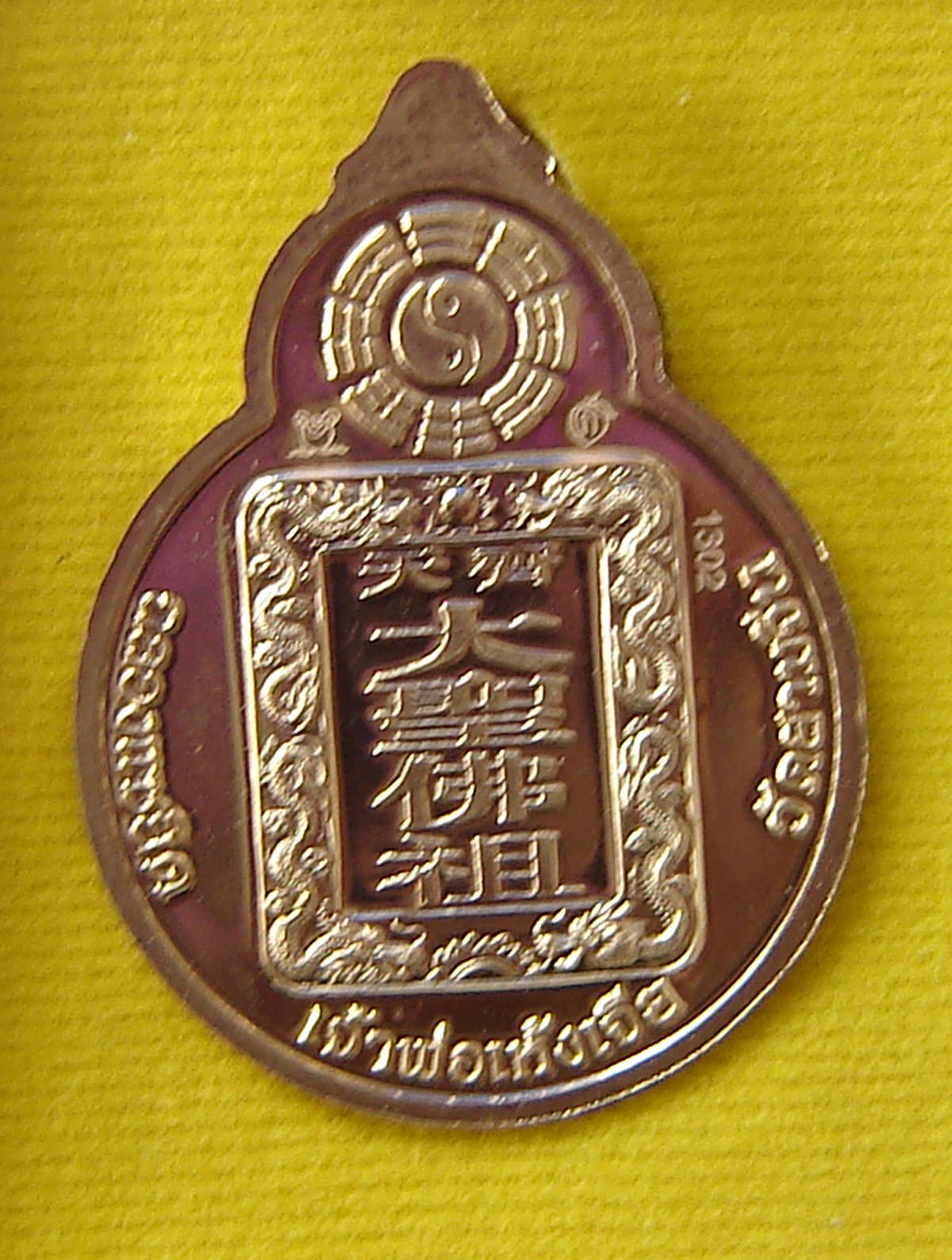 Each coin bears a limited edition code number stamp, above image is only an example (number can differ from the number in the image), and the 'Gor Gai' code letter. The words 'The Enlightened Sage' are embossed in Chinese Lettering on the rear face. The crafstmanship of these amulets is first class, high quality finish, which stands out from the crowd and speaks for itself. A Yin Yang, and Chinese Dragons are also featured on the rear face. A true Masterpiece of Fine Buddhist Miniature Arts, and also a very Sacred Magical amulet, which is of great interest for those who believe in and revere Thai Amulets, and are also of Chinese descent. The Miracle strength and power of these two deities are incredible aids to success. 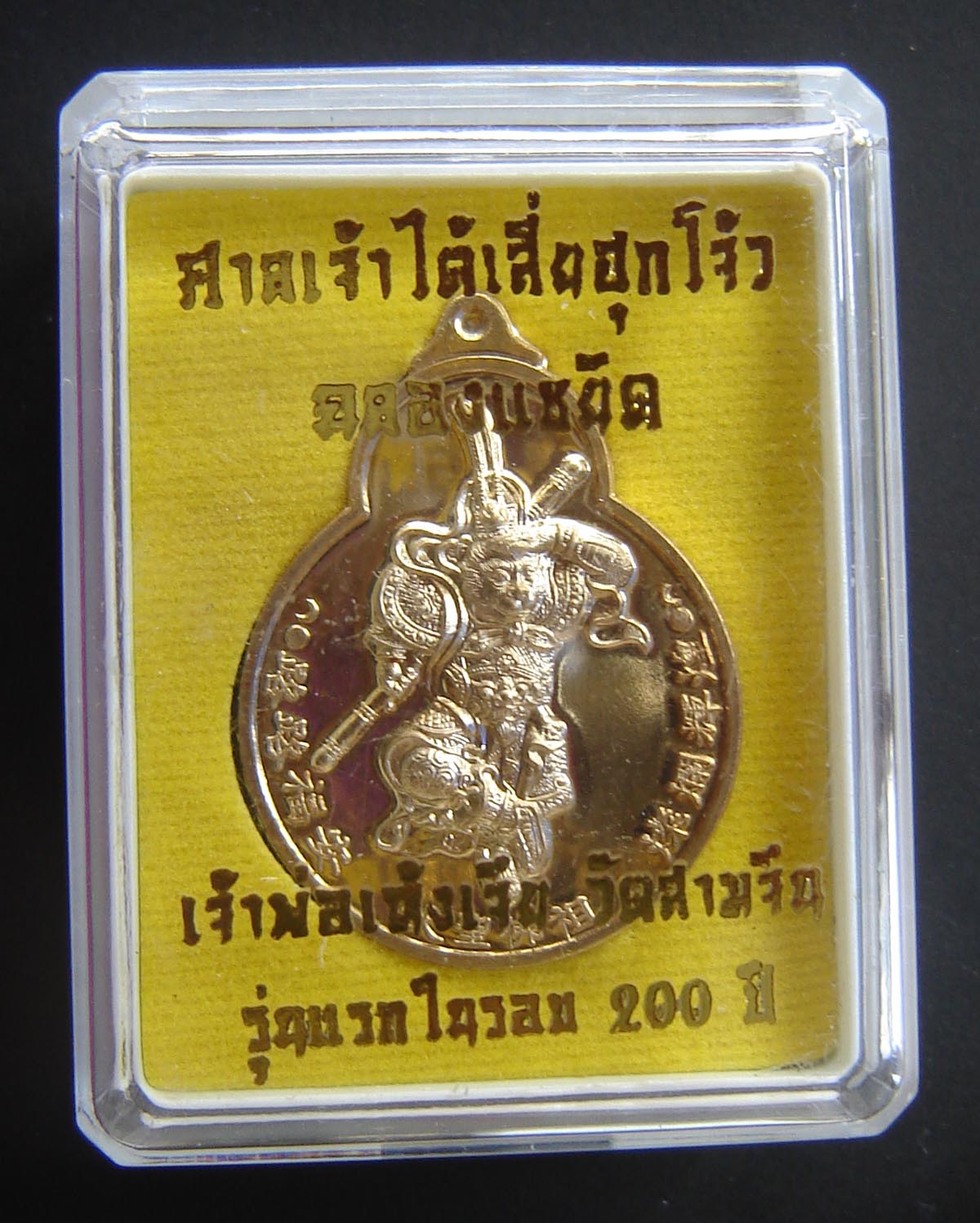 The coin is from Gammagarn collection, and has numbered code on the rear face, which differentiates it to the normal edition release, which has no numbered code, as you can see in the below image of a general edition coin, for your comparison. 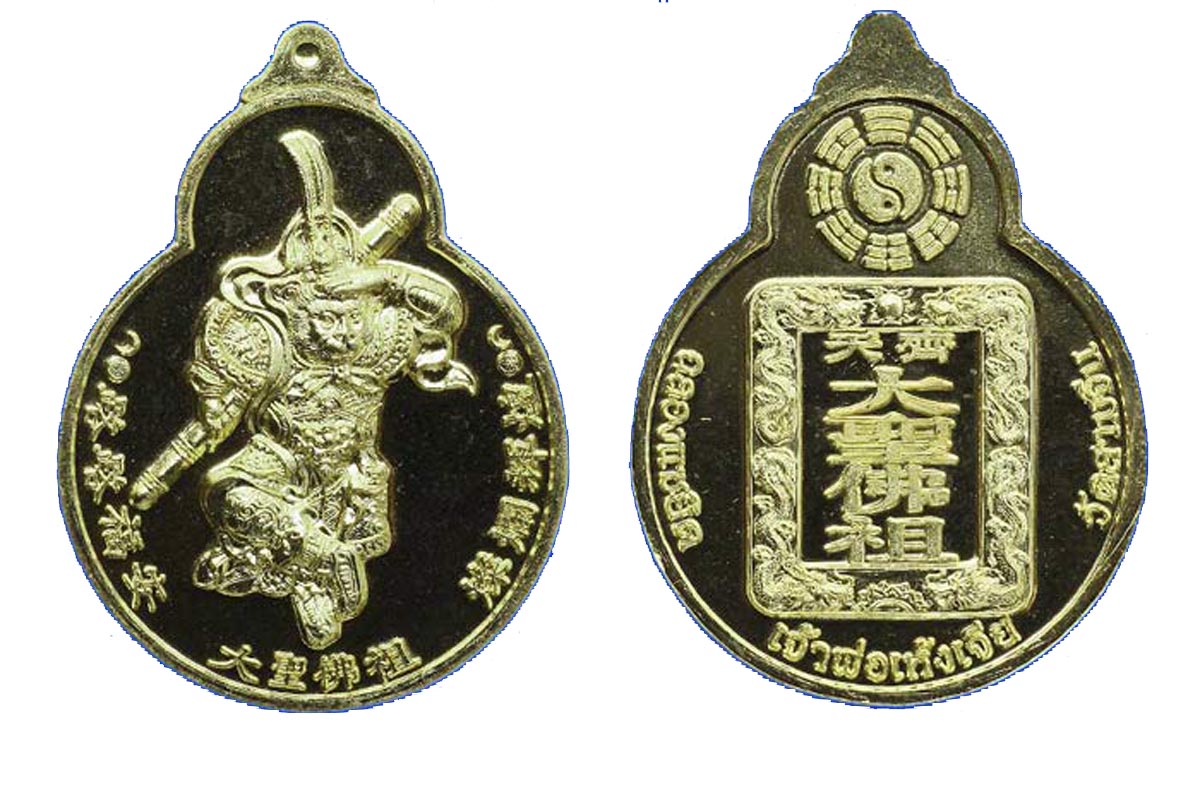