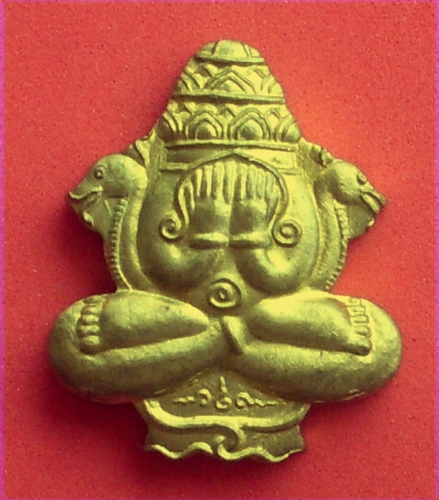 Miniature metal Pid Ta medallion made by Samnak Khao or with Khun Pantaraks himself presiding over the ceremony in what was perhaps the last ever real creation of amulets that were really invoked with the emanation of the jatukam Ramathep Bodhisattva Deity.

Rian Pra Pid Ta Pang Pragan Run Mongkol Jakrawan Puttakom Khao or is 1.8 cm x 2 cm in dimensions. It is a classic and beautiful piece of Southern Thai Buddhist Sacred magical Art. Pra Rahu Deity is included in the design, and the signature of Khun Pantaraks Rachadej is embossed on the lower part as proof of authenticity. Many cases of Miracles have been recorded of those who owned and wore this amulet, making it a very sought after and almost impossible to get hold of sacred item, due to its tried and tested history of miracle events and occurrences. It is constantly raising in value and thus is destined to become one of the 'unaffordable' amulets of Thai amulet collection.

In the year 2545 BE, there was the occasion where Por Tan Glan and Police Seargant Khun Pantaraks Rachadej joined forces to create the famous 'Pra Pid Ta Mongkol Jakrawal Puttaakom Khao Or' edition of amulets, with the same purpose and intention of the previous occasion, as well as to celebrate the 88th anniversary of Por Tan Glan.

The Puttapisek Blessing and empowerment ceremony as well as the making method was completely faithful to the correct alignments and methods necessary for the making of true authentic empowered Jatukam Ramathep amulets.

In addition, as far as sacred Buddhist Art is concerend, the amulets were all of incredibly refined beauty.
The Muan Sarn ingredients used were of immense sacredness and powerful magical potency.


Puttapisek/TaewapisekEmpowerment Ceremony;
First Ceremony - the Piti Te Tong (gold pouring ceremony), was made according to the ancient traditional methods of world famous samnak Khao Or lineage. Por Tan Glan and Seargant Khun Pantaraks Rachadej, Ajarn Chanttip Pantaraks Rachadej, Ajarn Prajuab Kong Hluea and many other extremely famous and able Gaeji Ajarns of the Khao Or tradition (8 masters to be precise) were present for the ceremony.

During the ceremony, there was a miraculous occurrence which those present witnessed; Just before the ceremony, a massive rainstorm fell from the early morning onwards, right up until the moment of the commencement of the Te Tong ceremony, and in the moment of commencement the rain storm thunder and lightning suddenly stopped as if someone had switched off a light. During all of the various empowerments of the different kinds of amulet, ranging from the Pim Pra Pong Mongkol Jakrawal Suriyan-Jantra, Khun Phaen Normo and the See Pheun Mongkol Jakrawal, the sky was silent and not a drop of rain fell. As soon as the final empowerment closed, the rain fell like a wall of water again and the thunder and lightning roared loudly as before.

In this ceremony, Khun Pantaraks rachadej was the presiding master of ceremonies and used the Wicha reuks Maha Mongkol Aek -a - U

Second Empowerrment ceremony;
The second Empowerment was held in the Vihara shreine room of Wat Pratat in nakorn Sri Tammarat, with Khun Pantaraks rachadej as the presiding master of ceremonies on thursday (exact date unresearchable) May 2545 at 19:09.
Khun Pantaraks and Ajarn Prajuab were the creators of the amulets.