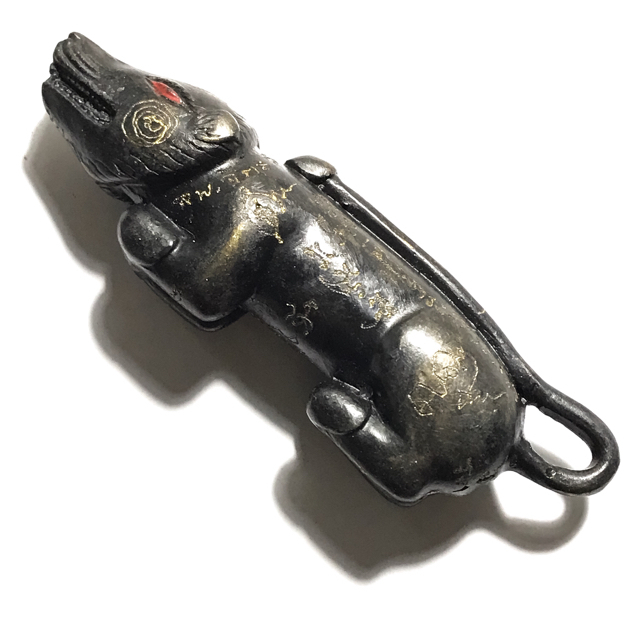 This Chamot Loi Ongk Bucha Statue in sorcerous metals with Khom Yantra spell Inscriptions copvering the surface, was created and empowered by Luang Por Jidtr Gittibpalo, of Wat Pha Huay Rahat temple, in Nakorn Rachasima. Luang Por Jidt is famous for miraculously having been delcared dead, and then coming back to life.

The Chamot is an ancient animist charm with powerful Maha Pokasap, Maha Lap, and Maha Sanaeh Magic effects. Luang Por Jidt's Chamot Charm is a perfect alternative for those seeking the famously powerful Palad Khik Hua Chamot of Luang Por Pina (Wat sanoim Lao), but who can either not find an authentic one, or simply can not afford one.

The Palad Khik and other Wicha Chamot amulets of Luang Por Jidtr are considered to be the most powerful of living masters in the present day, along with a few of the still living older Lanna Masters, such as Kroo Ba Buddha. 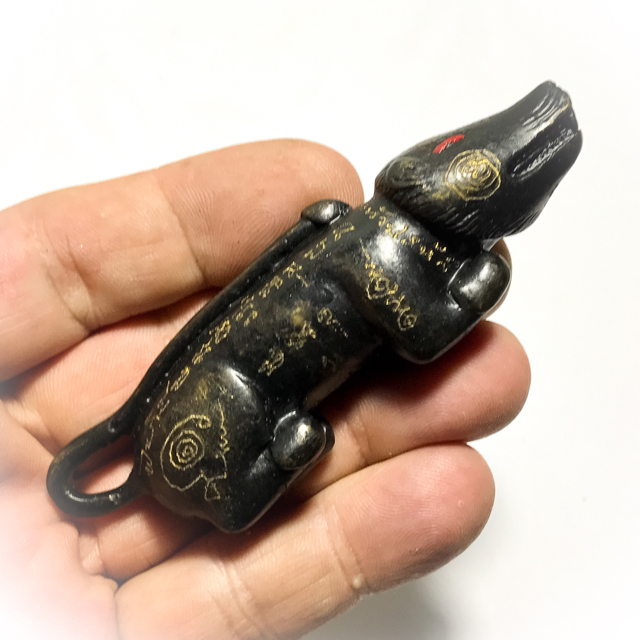 The Civet is cast in Bucha size for Altar Placement, or in a small shrine receptacle in the place of business, and has gemstones as its eyes. Luang Por Jidt also did a hand made spell inscription on the surface of the amulet with engraving tool. Luang Por Jidt performed the necessary rites to empower the amulets with the magic powers to multiply wealth and possessions, and to attract the opposite sex with its civet aphrodisiac magic. 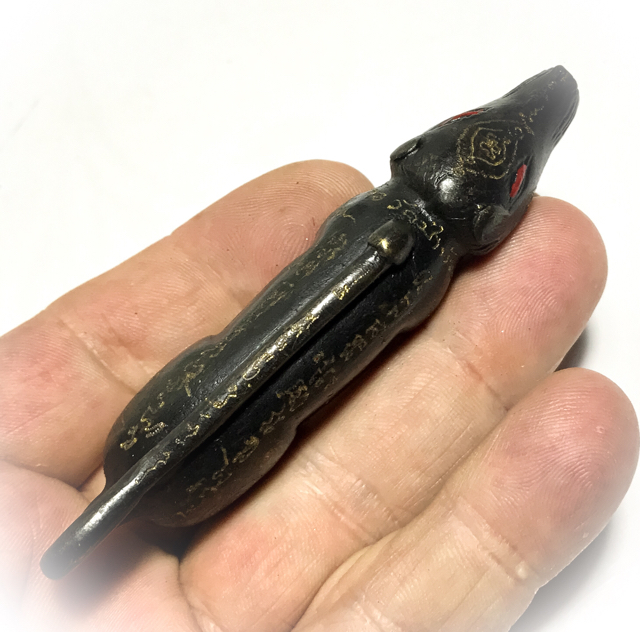 The Invocation Summoning, Awakening and Turning of the Four Elements was performed to Reanimate Living Magic within the Static Form, according to the Ancient Lanna Grimoires and Magical Formulas of the Wicha Look Krok Chamot. The full formula of Invocations for the Kata Akarn Sam Sip Sorng were performed as is ubiquitous. for reanimation of the spirit within the image This is an essential part of all Necromantic Empowerment with Animal form amulets, which are imbued with a resident spirit.

Sacred Khom Sanskrit Inscriptions and Yantra have been inscribed all over the surface of the statue, which has been given red eyes for seeing treasures 'in the dark' that escape all but the most observant hunters. Sacred Na Inscriptions Invoke Spells for Metta Maha Niyom and Kaa Khaay, Choke Lap to increase Business Sales, Gambling and Lottery Luck, and Mercy Charm. The Chamot Aathan measured 4 Inches in length, and weights around 105 grams. 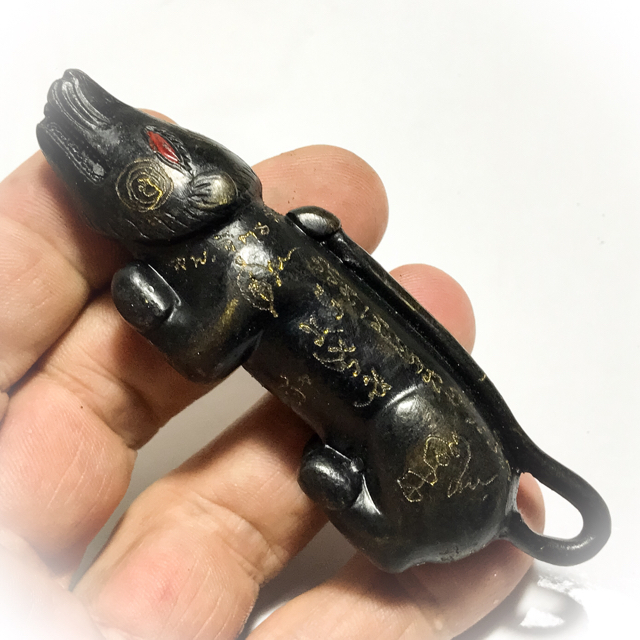 Luang Por Jidtr Gidtibpalo is a Gaeji Ajarn Master Monk who possesses a large compendium of Wicha and Magic Spells, who has been been a monk since he first ordained as a young child as a Samanera Novice, and did not disrobe throughout his life.

Luang Por Jidtr spent very many years wandering in solitary through the forests on Tudong, and learning Wicha with a great many powerful Master Monks throughout his years of wandering. Wherever there was Wicha to be learned, Luang Por Jidtr would travel there and beg to learn the Wicha. As Luang Por Jidtr reached his ninth year of ordination, he vowed to practice the extreme Tudong method of only bathing once a year. 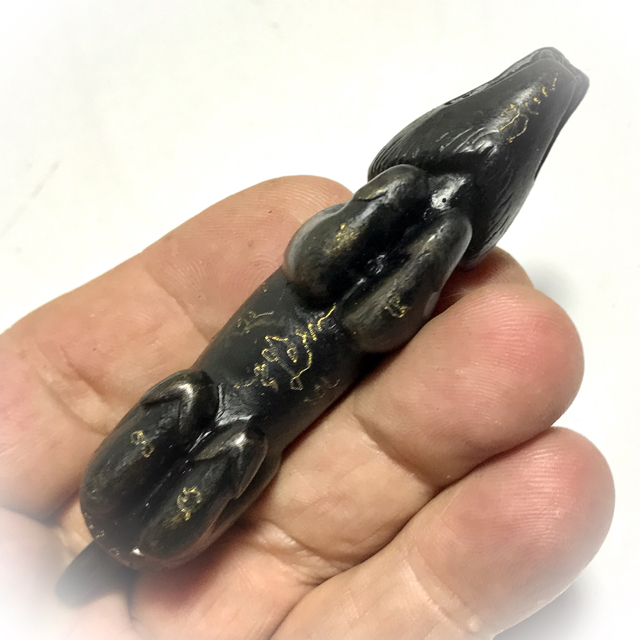 What was strage about Luang Por Jidtr as he practiced without bathing more than once a year, was that his body did not have any smell at all. During the whole time of this extreme practice, he slept inside an old coffin which was installed within his Kuti Hut every night until dawn. He continued to maintain this practice until the year 2545, when Luang Por Jidtr became seriously ill, and died. His heart stopped beating and his blood stopped circulating, and the doctor found no signs of life at all, and declared Luang Por Jidtr to have passed away. 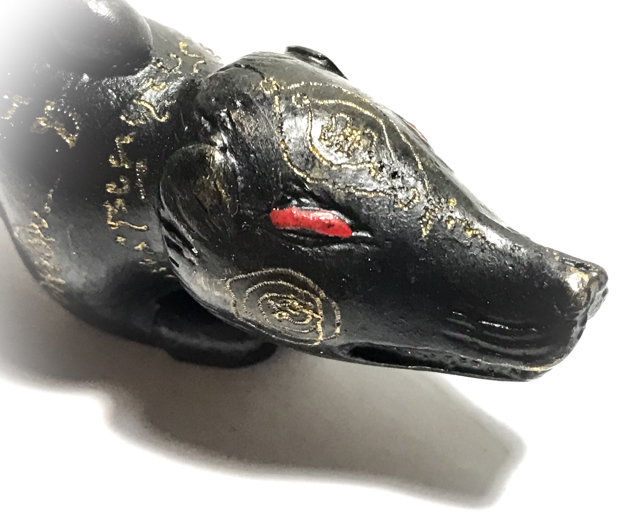 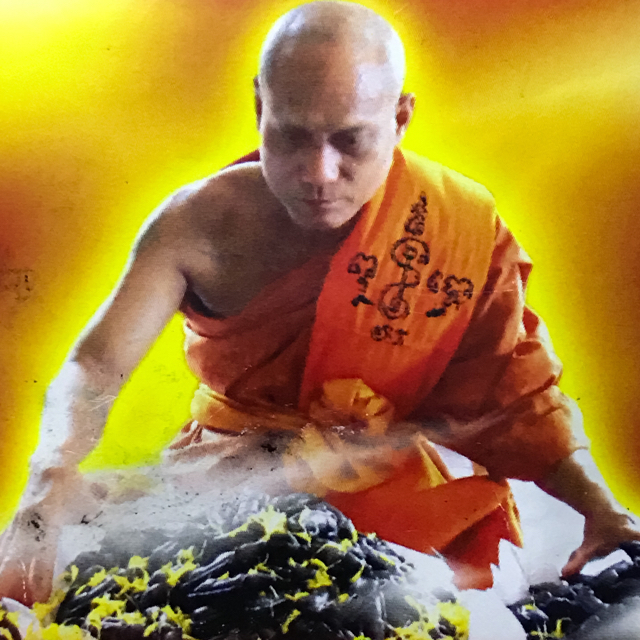 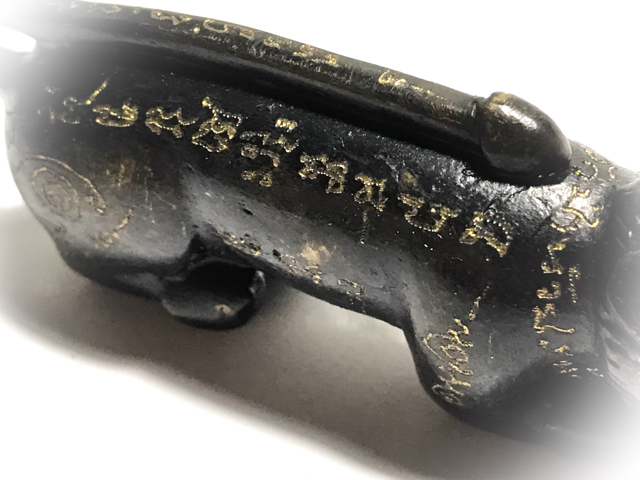 But Luang Por Jidtr came back to life and rose up again, after which he began to teach people about "Baap-Bun' (Sin and Merit) and about the Hell worlds and the Heavenly worlds, and the importance of living one's life properly with moral virtues to avoid the hell worlds. Luang Por Jidtr used to stay in those days at Wat Nong Nok Grarian temple, but later moved to Wat Taep Nuan Tip in Sra Gaew, laterl taking on the charge of Wat Huay Rahat. His amulets are rare to see in circulation, and were never made in large numbers, and are very highly revered by his devotees, for the belief in Luang Por Jidtr and his miraculous powers of resurrection.

Notice the four Phallic paws,and tail, which along with the phallic shaped Chamot (Civet Cat) head, makes a 5 Point Palad Khik, which with the Phallic Hooves make it also a Paetch Payatorn - a truly ancient animist Wicha with Vedic Influences.

The Paetch Payatorn Deity is also known as ‘Taep Pragaes’, ‘Khun Phaen Taewada’ and ‘Taep Suryan’. This Deity is one of the most Powerful Magical agents of wealth and prosperity, and is gaining ever incresing numbers of Devotees due to the immensely successful results brought from practicing Worshiping this Powerful Deity of Love, Compassion and Generosity, which induces friendliness, love and admiration in those who approach. Considered a great tool for good business, lottery success, social and amorous adventures. 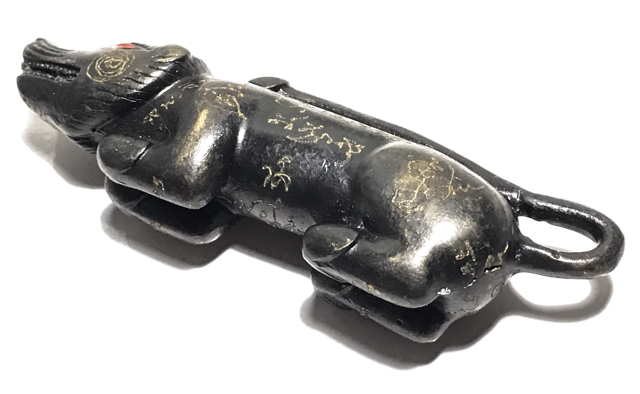 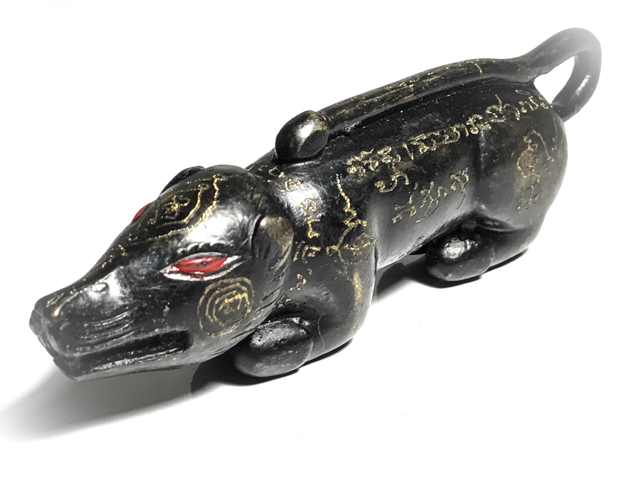 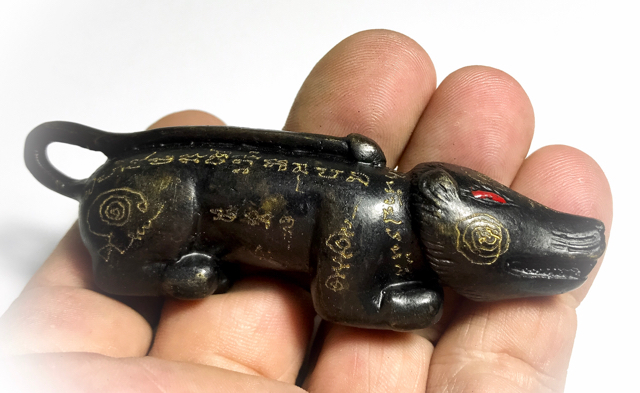 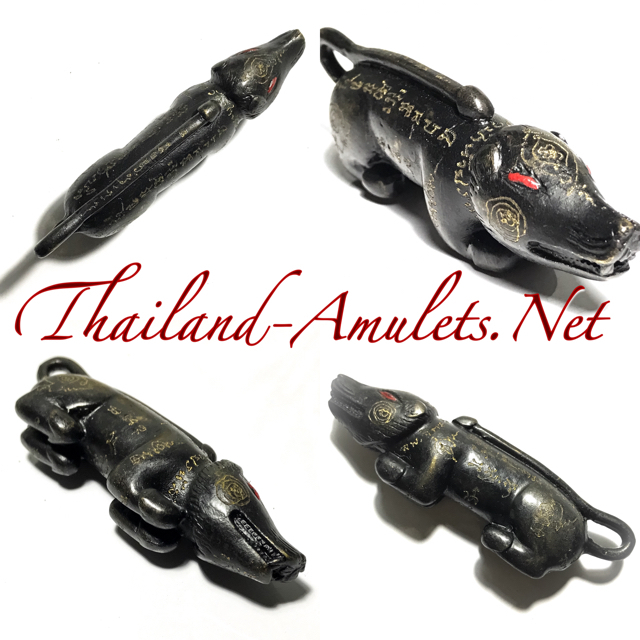 In Thailand we like to keep Animist Charms and sacred Elements on a Pan Kroo Bucha Receptacle, which we have made available as an extra option for you to choose if you wish. 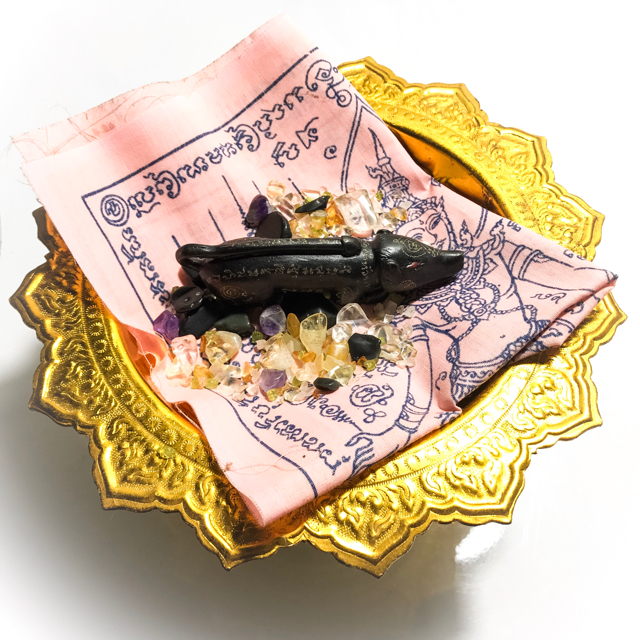