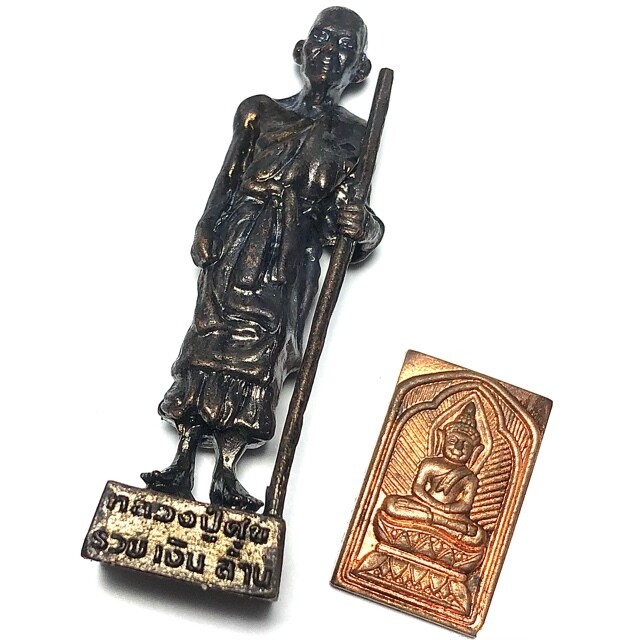 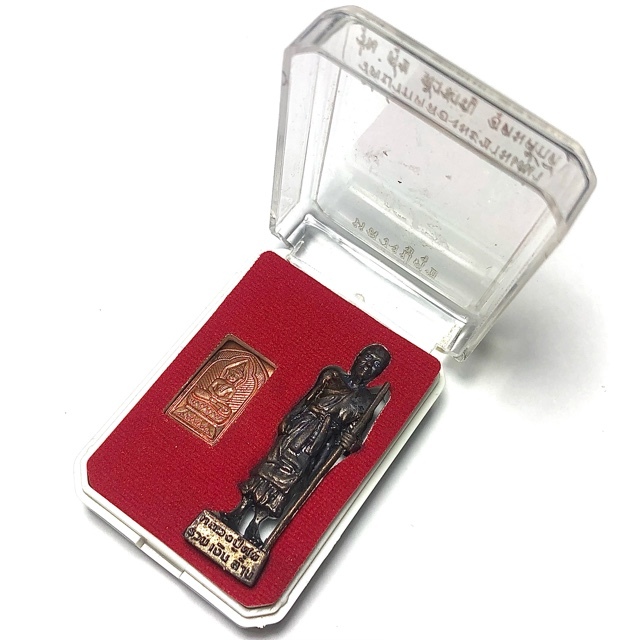 This is a two amulet set, composed of Pra Pim Prapa Monton Rasamee - the famous Pim from Luang Phu Sukh (Samran), with the image of a Buddha, with Radiant Aura emissions. The rear face of the coin, displays the Yant Na Maha Sethee millionaires luck Sacred Na spell embosed upon it. Many Masters of the Luang Phu Sukh lineage were present to empower this edition along with the abbot of Wat Pak Klong Makham Tao Luang Por Samran, who was accompanied by Luang Por Suea Dam, Luang Phu Na, of Wat Nong Bua, Luang Por Pra of Wat Koke Dork Mai, LP Pratuan, and Luant Por Dhamma, also of Wat Oak Klong Makham Tao, Luang Por Som, of Wat Po Tong in Ang Tong, and Pra Ajarn Wasant of Wat Sai Ma Dtai in Nontaburi, who is highly famed assisting in empowerment ceremonnies for many editions to help temples all around the country.

A most auspicious double gammagarn set, especially recommended for devotees of the master monk Luang Phu Sukh of Wat Pak Klong Makham Tao, and the masters who performed the blessings, as well as a highly recommended auspicious Buddhist amulet for ladies or children to wear (coin). The statuette can be placed on a small altar or tray (pan kroo) for worship, or can be encased for wearing as an amulet. 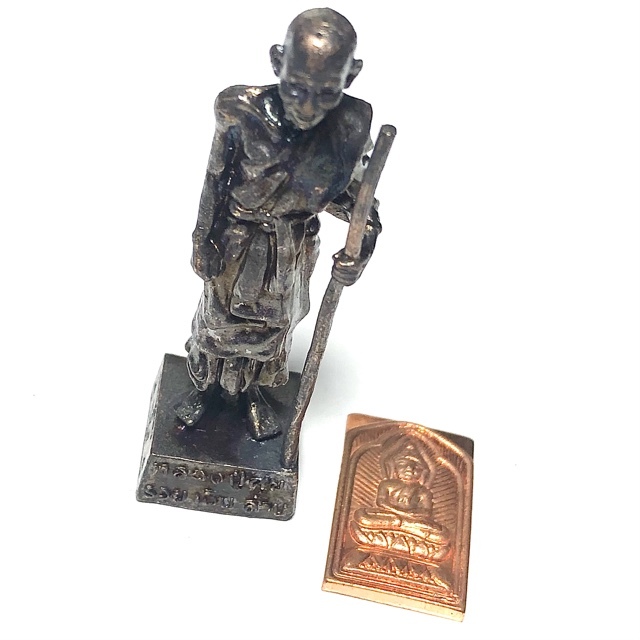 The Loi Ongk Statuette stands four Cm high. The base has This is a special set of Amulets, all of which the statuette and Buddha Coins were cast, from sacred metals taken from residues of the casting ceremony of the making of the world's largest statue of the great monk Luang Phu Sukh of Wat Pak Klong Makham Tao. 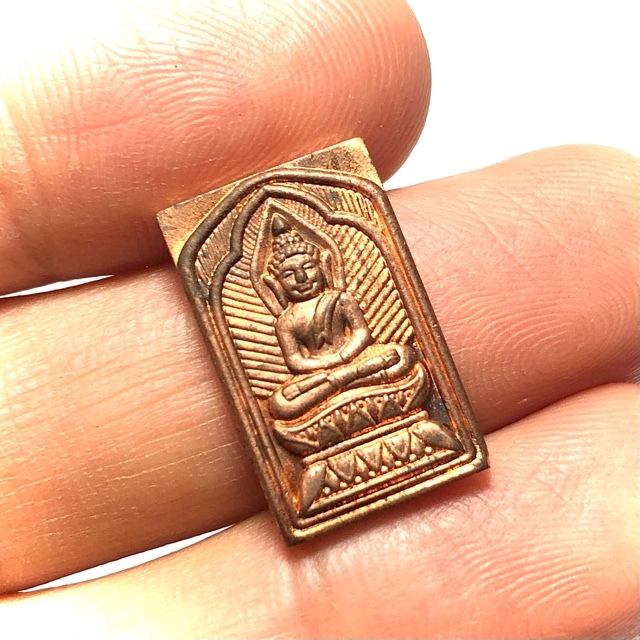 The sacred Yant Na Maha Sethee is emblazoned on the rear of the coin. 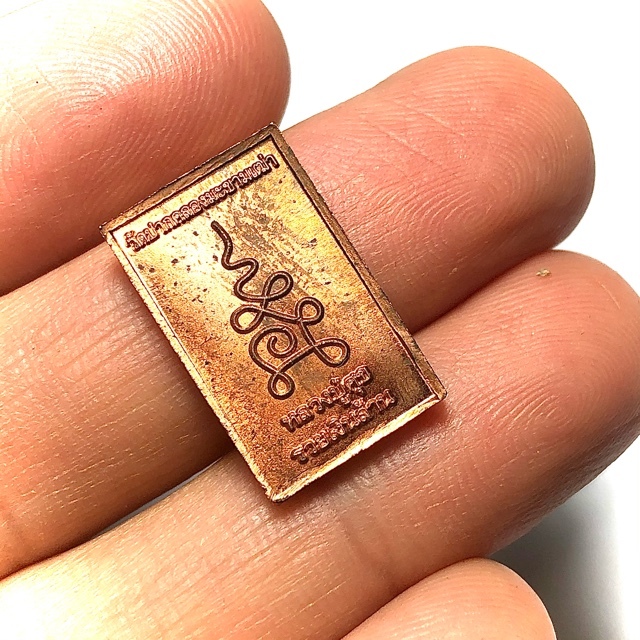 The image is made from extremely high quality sacred ingots made from yantra foils and artifact brazen metals, and is blessed By a number of Great Buddhist monk who are apprentices of the lineage of this great monk of historical legend. Amongst the great masters performing the Buddha Abhiseka, were; 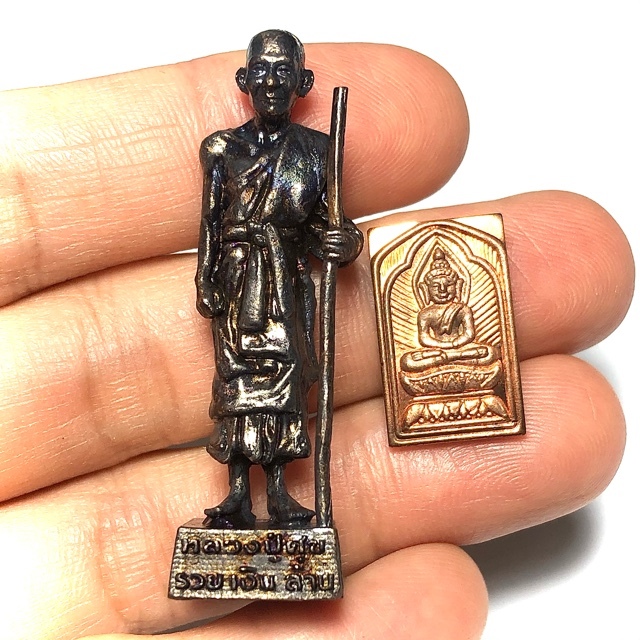 Luang Phu Sukh, is considered one of the Greatest Master Monks in the History of Thai Buddhism, and is believed to have possessed the most powerful sychic abilities, and magical mastery, able to perform amazing miracles. Luang Phu Sukh was born in the year 2390 BE, towards the end of the Reign of His Majesty Rama 5.

Luang Phu Sukh, was ordained as a Bhikkhu at the age of 22, at Wat Po Tong Lang Nontaburi. His Upachaya Ordaining Officer, was Luang Por Pra Atigarn Cheuy Jantasiri, Abott of Wat Po Tong Lang. He then stayed on at first at the temple, to acquire his initial training from Pra Atigarn Cheuy, developing the methods of Vipassana Kammathana, and Kasina Elemental Meditation. 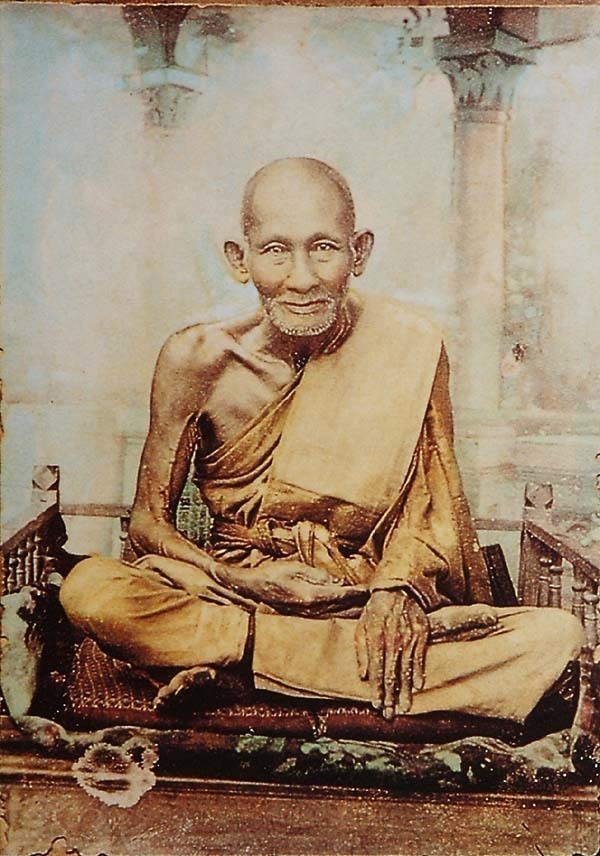 After a while, Luang Phu Sukh was able to separate and control each of the ten elemental and formless objects of Kasina Meditation, and Mastered the control of Elemental Magick. After Mastering these techniques, he traveled on to stay at Wat Sam Ngam Patumwan, to study Pariyatti Dhamma (academics), in order to increase his level of understanding of the more subtle aspects to observe using the Dhamma Eye, when looking within the 5 aggregates in Vipassana Mindfulness Meditation, which of course gives rise to psychic powers as a side-effect of the Enlightenment Process. 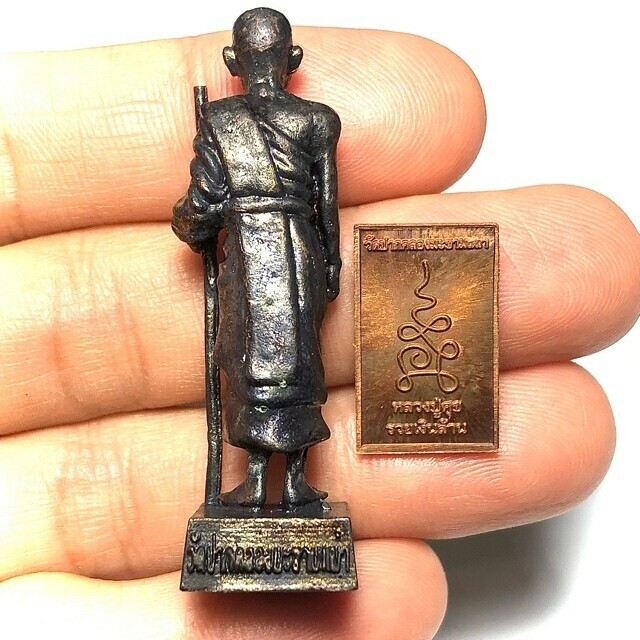 It was here that he met up with the great Luang Por Ngern of Wat Bang Klan (Wat Kongkaram), in Pijit, and learn some Wicha with him too. Moving onwards to stay at Wat Chana Songkram in Bangkok, Luang Phu Sukh then practised mastering these more subtle techniques. Luang Phu Sukh thereafter went to develop Wicha at Wat Plab, the temple where all great Masters of History have passed through to pass the test of Mastery of the five raptures meditation, and gain the power to bless amulets with truly powerful Magick. It is said that it was here at Wat Plab, under tutelage of Pra Sangkarach Maekh, that Luang Phu Sukh performed a Miracle by performing a triple incantatiion upon 3 Banana Tree Flowers, and pointing his wooden staff at them, the flower then turned into a pile of rabbits. 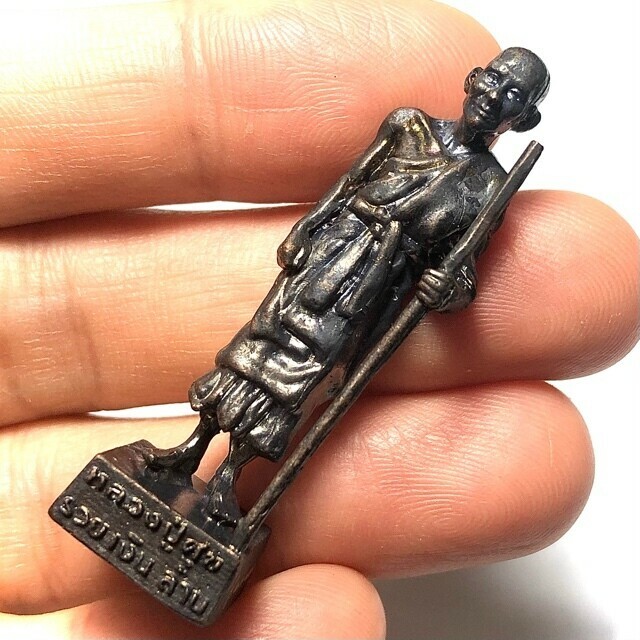 Apart from this, Luang Phu Sukh also learned and mastered Wicha Len Prae Taat Elemental and Alchemical Magic, and Magickal metallurgy, with the Great Luang Phu Tap of Wat Anongkaram (Master of Alchemy and maker of one of the top ten Pra Pid Ta, and Cast Metallurgical Amulets of all time). Luang Phu Sukh at this time also stayed with Somdej Puttajarn Nuam, who was simultaneously developing his Wicha, and was also a born local of Chainat, the Province where LP Sukh was born. 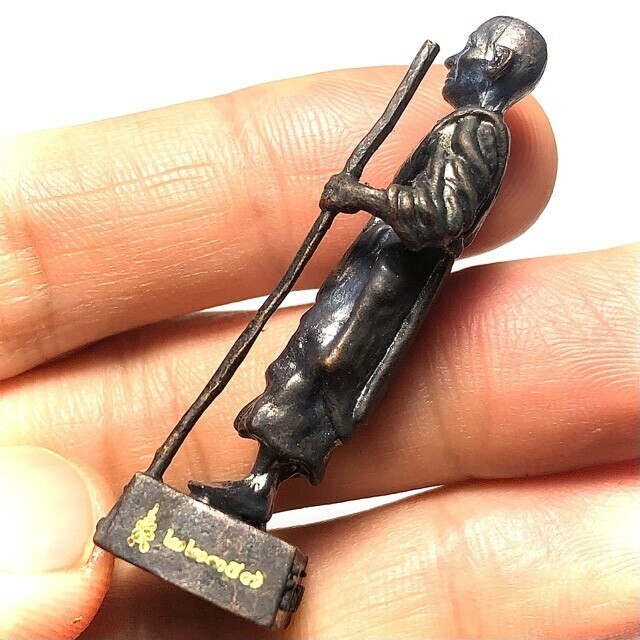 Luang Phu Sukh Mastered the Wicha Maekasit Alchemical Mercurial Alloy making methods for Sacred Amulets, which is known to have the power to turn bad things into good things, and change one's luck and fate, improving one's fortunes. The Wicha Len prae Taat of Luang Phu Sukh is hence derived from the Wicha of Luang Por Tap of Wat Anongkaram and the Grimoires of that Temple Lineage. Luang Phu Sukh Liked to travel in solitary or in unison on Tudong in the forests and jungles of Siam in those days, and hence got to cross paths with many great Tudong Masters, along the secret paths within the forest which Monks take. He gathered a massive ciompendium of Wicha and mastered them in his solitary forest and cave meditations. But the temple was in a terrible state of disrepair on his arrival, that it was impossible to repair anymore. 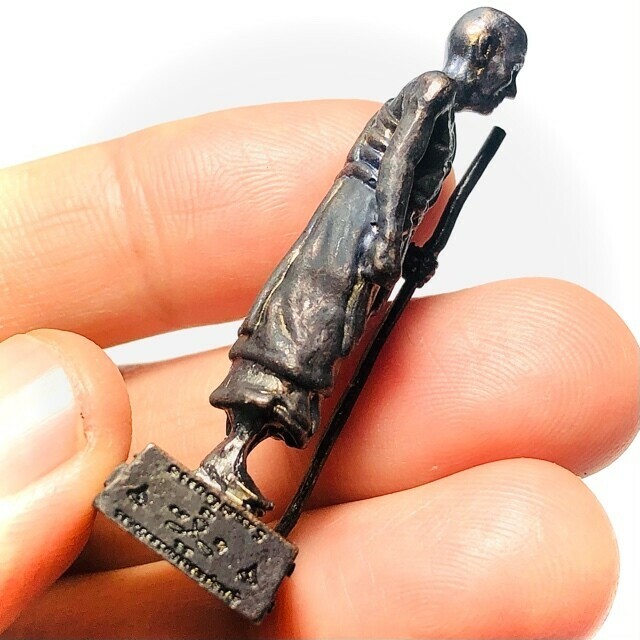 So Luang Phu Sukh decided to begin anew the construction of a completely new temple, with new buildings, to replace the unrepairable edifices. The temple was given official recognition and registered as Wat Pak Klong Makham Tao in the year 2447 BE, as Luang Phu Sukh was still liviing, fulfilling his great achievement within his own lifetime. Luang Phu Sukh managed to build various extra edifices for the temple before he passed, such as the Uposatha Shrine-Room, Sala Bprian Dhammma Study Hall, Kuti Huts for Monks, and other important shrines and statues. It was during this time, that it is said that Luang Phu Sukh developed the natural ability and power, to change the elemental constitution of material objects, and to be able to bring things to life from inanimate objects, as well as breathe underwater.

Luang Phu Sukh's Powerful Magic, and Psychic Abilities, and Powerful Spellcasting, was renowned around the Nation, to the point where the Great Royal Naval Officer and Courtier, Grom Luang Chumporn Khaet Udomsak (Father of the Thai navy), came to beg to become his apprentice (Looksit) in Buddha Magic. 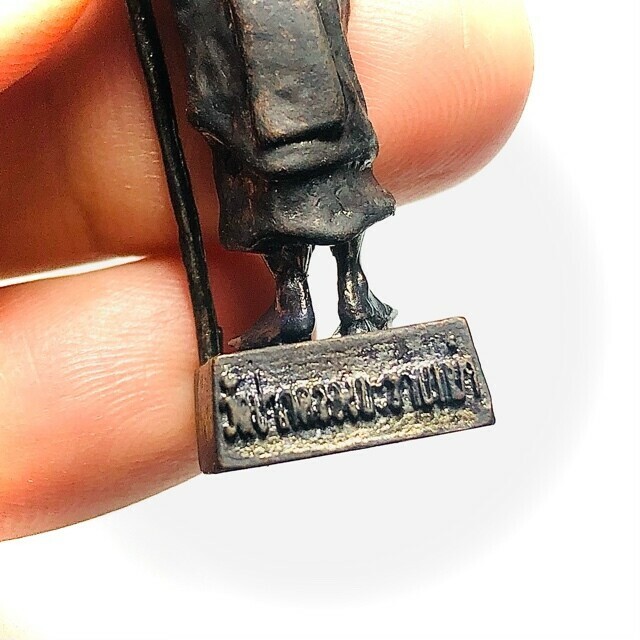 Luang Phu Sukh was seen by Grom Luang Chumporn, and other witnesses over the years, to enchant a Tamarind leaf to become a cricket, or turn a person into a crocodile, enchant banana flowers to become rabbits, duck under the water and remain there without breathing for long periods of time, and make a Takrut under thhe water without his robes getting wet.

Luang Phu Sukh, is also said to have possessed Wicha to make a Hun Payont, to use for becoming invisible, and teleporting to another place safely. After years of ordination and hard practice on Tudong, Luang Phu Sukh Learned that his Mother was ill, and so he left the forests and went to stay at Wat U-Tong Klong Makham Tao, which was a very ancient Buddhist temple, which lay deep within the mangroves of Klong Makham Tao river.

But the temple was in a terrible state of disrepair on his arrival, that it was impossible to repair anymore. So Luang Phu Sukh decided to begin anew the construction of a completely new temple with new buildings, to replace the unrepairable edifices. The temple was given official recognition and registered as Wat Pak Klong Makham Tao in the year 2447 BE, as Luang Phu Sukh was still liviing, fulfilling his great achievement within his own lifetime. Luang Phu Sukh man aged to build various extra edifices for the temple before he passed, such as the Uposatha Shrine-Room, Sala Bprian Dhammma Study Hall, Kuti Huts for Monks, and other important shrines and statues. 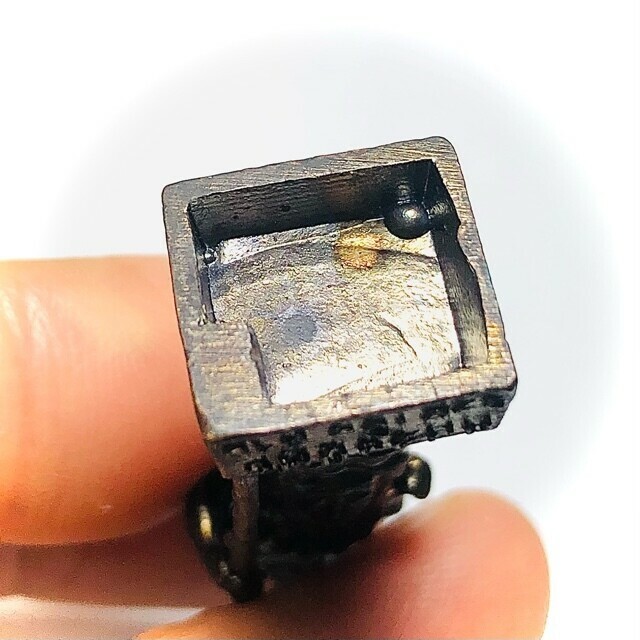 Luang Phu Sukh's Powerful Magic and Psychic Abilities, and Powerful Spellcasting was renowned around the Nation, to the point where the Great Royal Naval Officer and Courtier Grom Luang Chumporn Khaet Udomsak (Father of the Thai navy), came to beg to become his apprentice (Looksit) in Buddha Magic. Luang Phu Sukh bestowed his Wicha upon Grom Luang Chumporn, and Grom Luang also took a piece of LP Sukh's Civara Robe to use and make Pha Yant with for soldiers to carry on them, to test the powers of gunstopper magic of Luang Phu Sukh.

The results were indeed miraculous in the number of lifesaving miracles that Luang Phu Sukh's amulets have become amongst the most highly sought after of all time for their power of Kong Grapan Klaew Klaad Maha Ud, maha Amnaj and Serm Yos Serm Duang, for Professional Advancement, and Commanding Power, with Invincibility Magick. Luang Phu Sukh had many Wicha such as the Wicha Suea Saming, able to transform into a Tiger, and the Wicha Look Pern Sakot, which was to perform incantations into a bullet of a single shot firing gun, and the bullet would always find its mark on target, without fail. One could say that Luang Phu Suk is one of the greatest masters of the History of Thai Guru Monks, and is one of the top Ten Legendary Monks of all time. 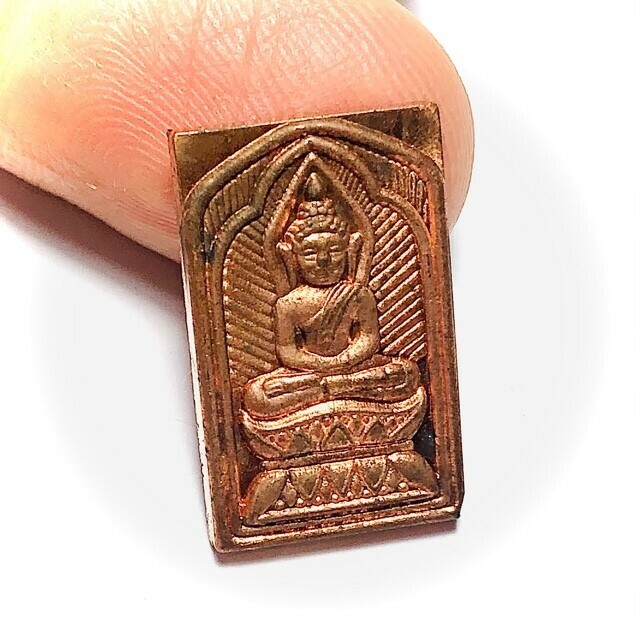 There are so many legends told about his miraculous powers and feats. His Mastery of Traditional healing and herbal Medicine has led his written works on the subject to become the greatest Thai Occult herbalism Recipe Grimoire in all existence. He was the Kroo Ba Ajarn of a great number of the most powerful Master Monks of the last Century, and his powerful Magic remains second to no other Guru Monk in Thai History.

Luang Phu Sukh Passed Away on 23rd December 2466 BE at age 75 after 50 years of ordained life, leaving behind the legends of his Miraculous abilities, and perhaps more devotees in the present day, than even when he was alive. Luang Phu Sukh is most certainly one of the top ten Masters of all time in Thai Buddhist History, and especially famous for his Rian Prapha Mondon Khang Rasamee, Pid Ta Pum Bpong, and his Powerful Takrut scroll spells. 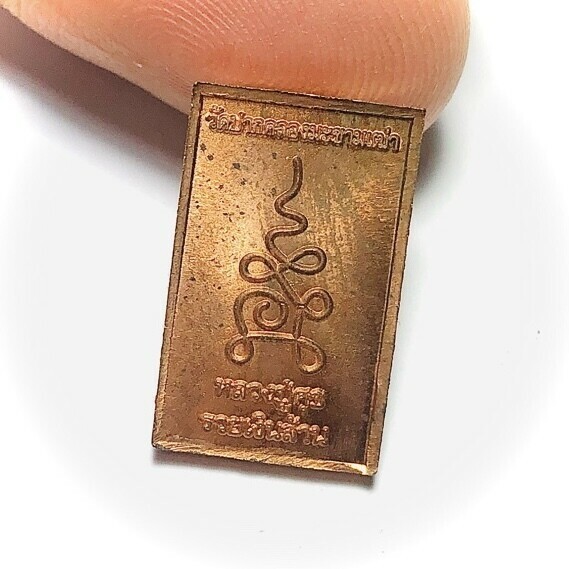 The amulets, and images of this, perhaps the greatest of all Master Monks with Wicha Akom, are amongst the most sought after and valued in the world of Thai Buddhist Amulets. Be it his Rian Roop Muean, Somdej Rasamee Kru Klong Khom, and Somdej Prapa Mondon Khang Rasamee, or his Pra Pid Ta, Prok Bai Makham, Takrut, Prakam Rosaries, and other Talismanic Charms, the spiritual value and magical power is equally regarded as being of the most powerful and truly magical amulets one could possess. It is said that Luang Phu Sukh became the Kroo Ba Ajarn of Grom Luang Chumporn, a Royal Courtier, an Admiral, and a Great Sorceror of his time. 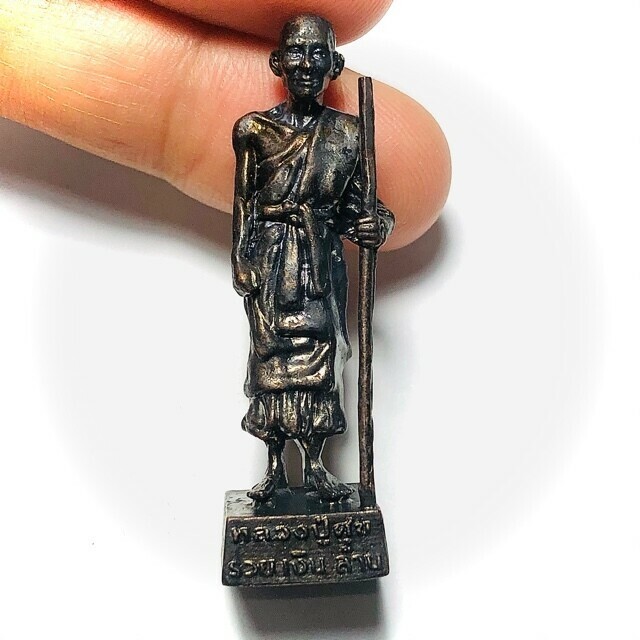 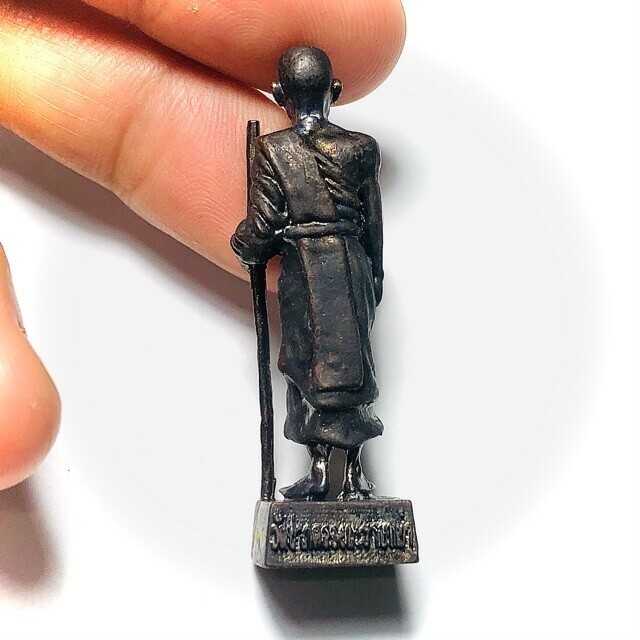 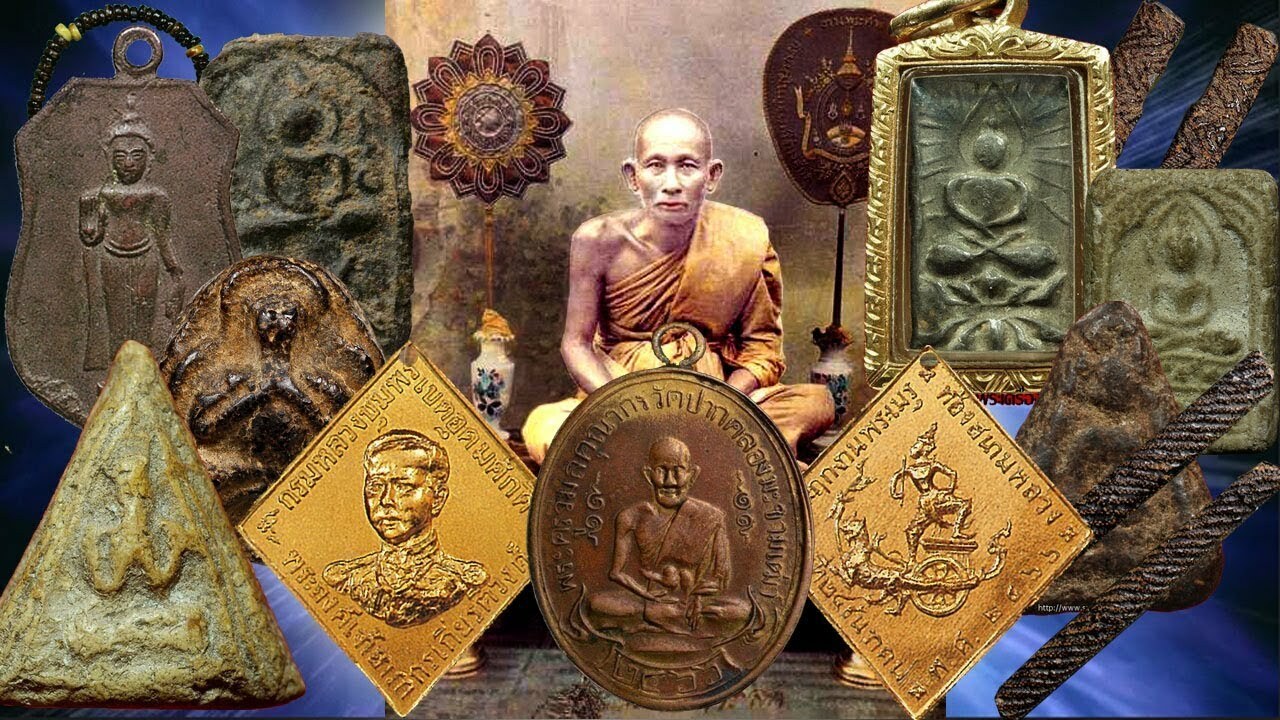