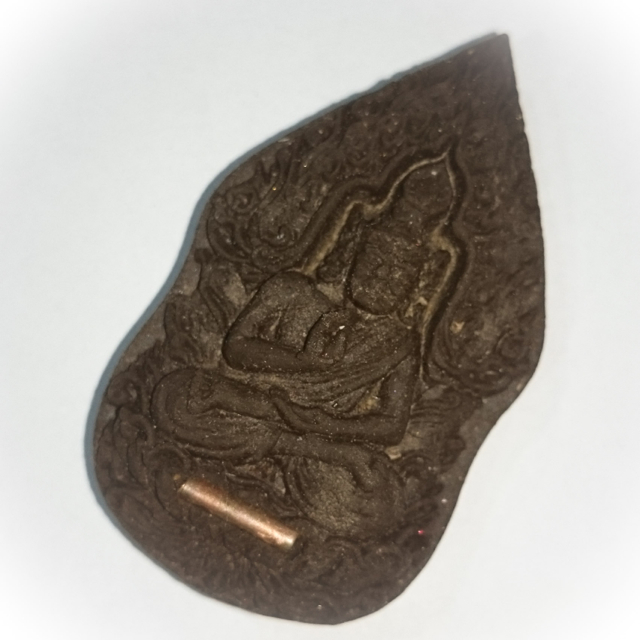 Ruesi 108 Boroma Kroo Haeng Saiyawaet - Lersi Por Gae Great Hermit God of Occult Sciences, with Pra Pirab Asura Yaksa Hermit God on the rear face - Made from Sacred Black Powders, with 3 Takrut (2 in rear face 1 in front base) - This model is the Special Ongk Kroo version, of two versions released in this edition, the standard version (Ongk tammada) was in light colored herbal powders without Takrut.

The amulet is made from a very highly concentrated mixture of Black Prai and Maha Sanaeh Powders, with Wan 108. Despite the extremely rich, coarse Muan sarn Powder mixture, the amulet still reveals incredible detail in the design factors of the front and rear faces of the amulet. 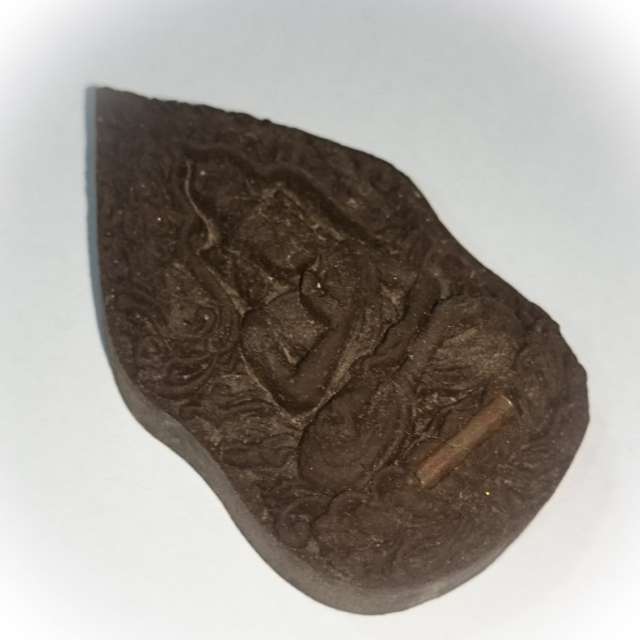 The front face features the Lersi Por Gae in the lotus posture holding his right palm upwards in the Mudra of Discussion (Discussing Dhamma) - This is the mystic gesture of Taras and Bodhisattvas, and this Mudra (gesture) is used when giving the Buddha's Teachings. One Takrut Scroll Spell in Nuea Tong Daeng is embedded into the lotus dais below the Hermit God. 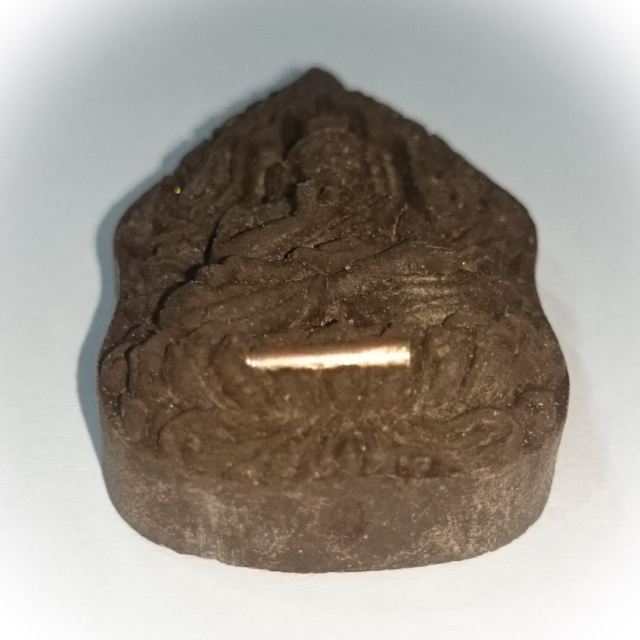 The rear face of the amulet has 2 takrut Scroll Spell inserts, and an embossed Yantra of the Asura Yaksa Deva 'Pra Pirab' (Bhairaba), who was a Lersi, and is featured in Valmiki the Hermit's Vedic Tale 'Ramayana' which is in Thailand known in its adapted form of 'Ramakien'. Pra Pirab possesses Maha Amnaj Power to produce 'Serm Yos' (Improve Status), and Impose Commanding Influence over others. Pra Pirab also Destroys Enemies and Backstabbers, much like the Eclipse God 'Pra Rahu Asura Deva'. 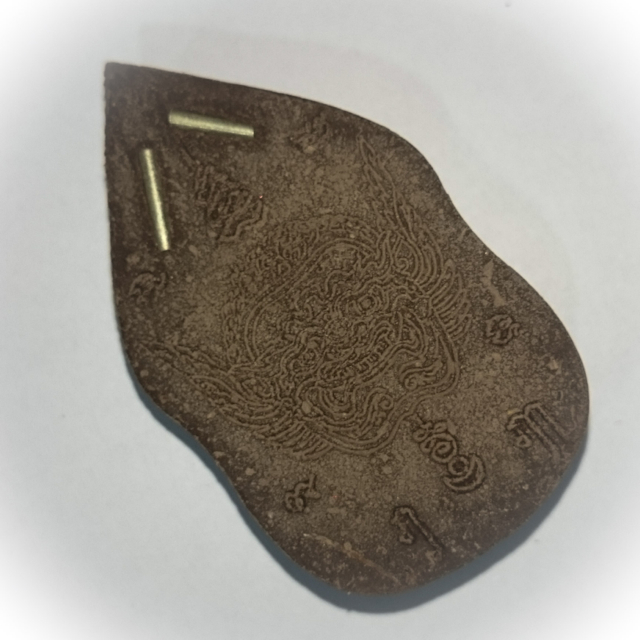 Above; The Mask of Lersi Pra Pirab Asura Deva, and 2 Takrut spells can be seen on rear face of Ruesi 108 amulet, along with the Kata 'Na Ma Pa Ta', the Kata Hua Jai Pra Lersi 'Leu-Leur', the Yant Dto spell, and a Sun/Moon Yantra with Sacred Unalome.

The rear face has the Khom Kata 'Na Ma Pa Ta' (Invocation of the 4 Elements), and 'Leu-Ler' (Heart Mantra of the 108 Lersi Hermit Gods), along with a Yant Dto Spell embossed.

The Kroo Lersi Por Gae and the Kroo Lersi Pra Pirab combine to protect and improve all facets of life, as to Bucha the Pra Lersi Hermit God sages, is to Invoke Great Prosperity and Success into one's life. 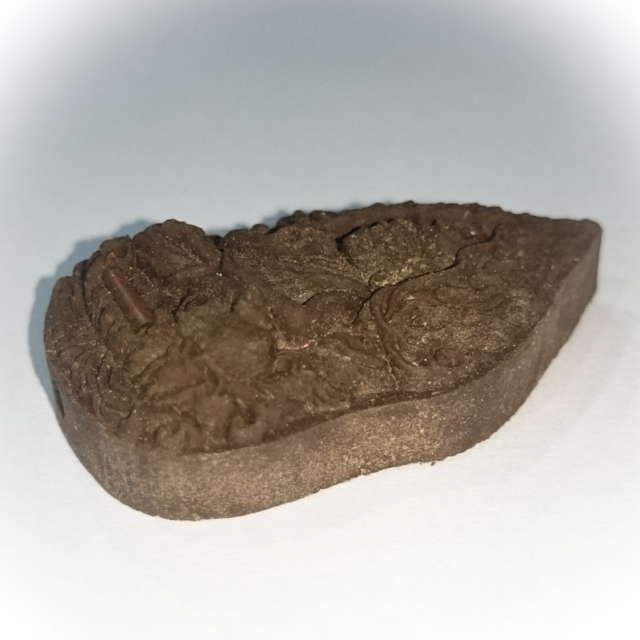 The Lersi Deva sits on a Lotus dais with a Crystalline Walled Lotus Arched Aura around him, which are intricately and extremely well detailed, with the most subtle filigraine forms within the detail of the decorative dais and arch.

The amulet is exceptional in its high grade Muan Sarn Powders, as well as its Extremely High Level of Artistic Design, and has recieved the full Ritual Blessing required according to the rules of Wai Kroo Lersi 108, with a Brahman Laymaster to invite the Devas and perform the Wai Kroo to the 108 Lersi Hermit Gods. 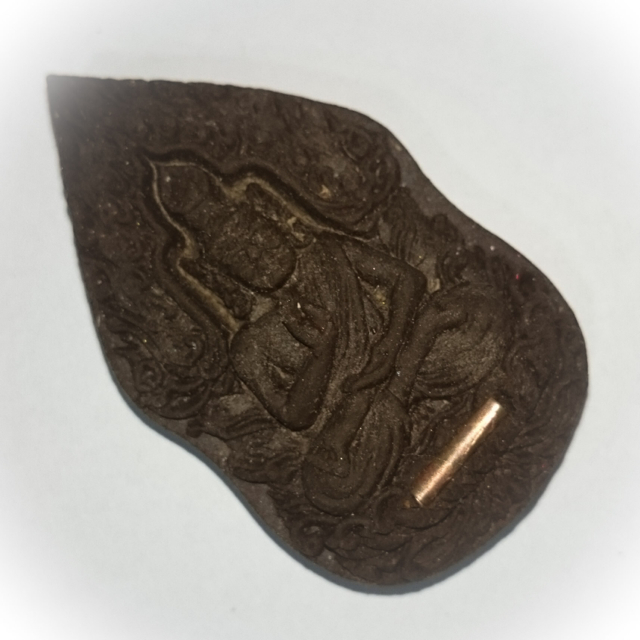 After the initiatory rites, subsequently the Buddha Abhiseka Blessing Ceremony of the Awakening, and Opening of the Eyes of the Buddha was performed by Luang Phu Tammachote. Many other Master Monks at Wat Po Gao Dton in Singhburi were present to assist in the blessings and empowerment.

Por Gae Lersi, is a highly revered Thai Lersi Deity of Ancient Renown. There are many Legends about many different Lersi. One of the Lersi to be found so often mentioned in Thai Mythology, is Por Gae Lersi Thai Fai. (Sometimes spelled “Pho Kae Ta Fai”). 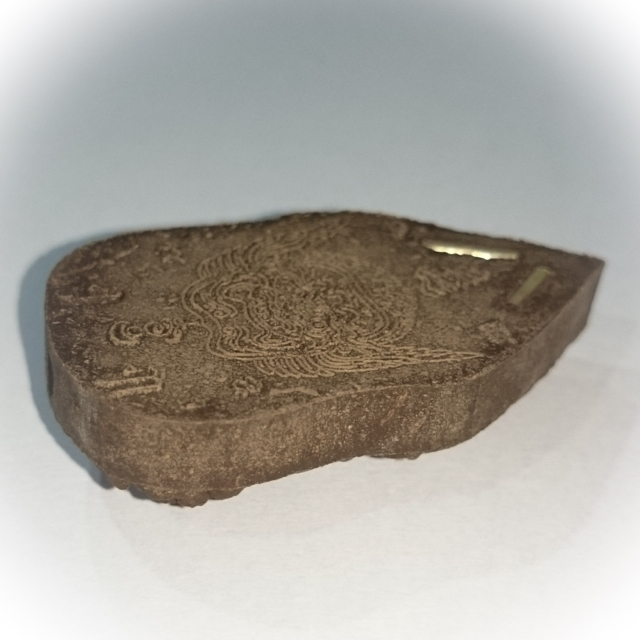 The legend of Highly Developed Beings has been told in different Mythologies and Cultures around the world. In Thailand there are also various legends of “Pu Wised”, or Lersi , Arahants or Yogis. These Lersi are said to have possessed various powers, such as Knowledge of herbal medicines, minerals, magical invocations, and supernatural abilities, such as Levitation, Teleportation, Alchemy, and Mind Reading.

These beings with special powers are reputed to have lived recluse lives in the forest, on mountains, or in caves; practicing meditative skills and mental development using secret methods passed on from mouth to ear by their fore-goers/masters.

The Lersi, or also known as 'Ruesi', are the holders of the Great Kampira Grimoires, and Magical Wicha of the Dtamra Saiywaet, and are the Root Guru Masters of the Magical Tradition in Buddhist Thailand. Lersi Deva Hermit Gods are Revered in Thailand under the Name 'Por Gae'. Por Gae defends these 'Wicha' etheral knowledges from both the ignorant who wish to destroy them, as well as the ignorant not ready to learn them. This Lersi commands respect and gives knowledge to those ready to accept the power that comes with the Lersi Path 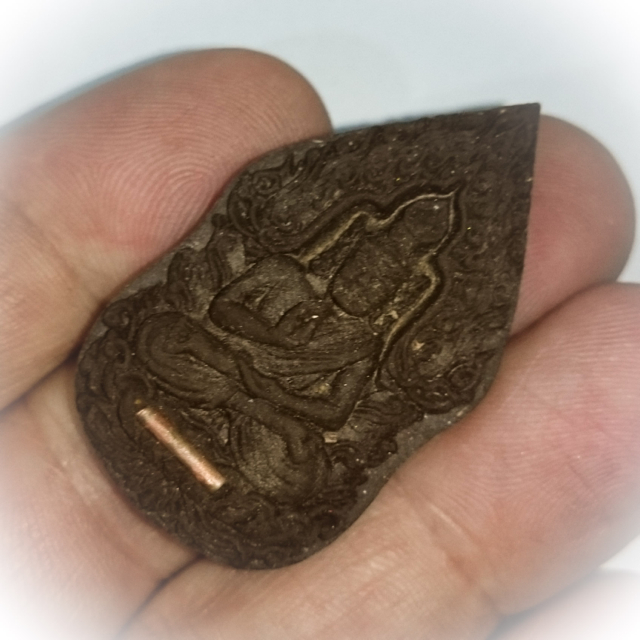 All of these blessings are given with the practice of revering and following the Ruesi Devas. It requires somewhat more effort to practice revering the Ruesi, than to wear an amulet, because the practice of Revering Ruesi is a regular applied practice and you must think that the Ruesi are always with you, and that one lives and behaves as a Looksit of the Ruesi Boroma Kroo Por Gae. 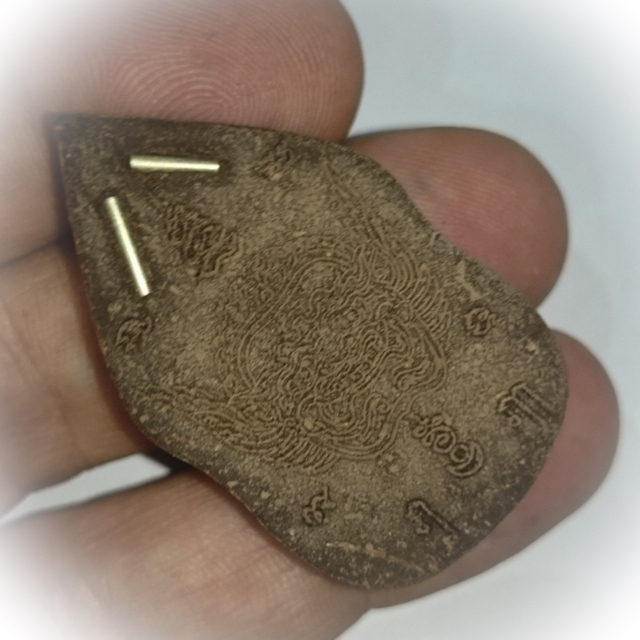 Apo Kasin means to stare/project water (āpa means water element) – one technique used for example to master the evocation of water element would be to obtain clear water, such as rain water for example, and fill a clean container with it (not to the brim). After this meditate and stare ate the water until the inner experience of absorption with water occurs. once mastered the use of this mind evocation in conjunction with the Kata “Aapo Kasinang” will enable the master to evoke water element into another element , such as earth. Staring water into earth would allow a Lersi to dive under the earth and swim in it as if it was water.

This is in fact the technique used for Kong Grapan and Maha Ud, which is the effect of making a bullet harmless or a gun refuse to go off when the trigger is pulled.The solid (earth element object is turned into a soft watery element, and thus becomes harmless. In another fashion, also the hardness, impenetrability and density of stone/earth can be used to project into softer objects to increase Kong Grapan resistance.

Dtecho Kasin is the Fire Elemental. Fire Elemental serves to Master the element of fire and heat, and be able to set things on fire, or to heat them up, or even to douse out flames. This also refers to the Inner Yogic mastery of Inner Fire, which serves to alchemise magical incantations and other forms of magical creations on the inner planes, and to control the body on an elemental level with access to Jhanic Meditative Abilities.

Vayo Kasin is the Air Elemental. The emptiness, lightness and invisibility and swiftness of air and the wind, is incomparable as an elemental force, for it is impossible to catch or contain, and cannot be truly measured except by density, but never by size or location. The Mastery of the air element, brings control of the laws of Nature pertaining to wind and sky, allowing to levitate objects including oneself, and to change the density of objects and oneself in order to pass through walls etc. 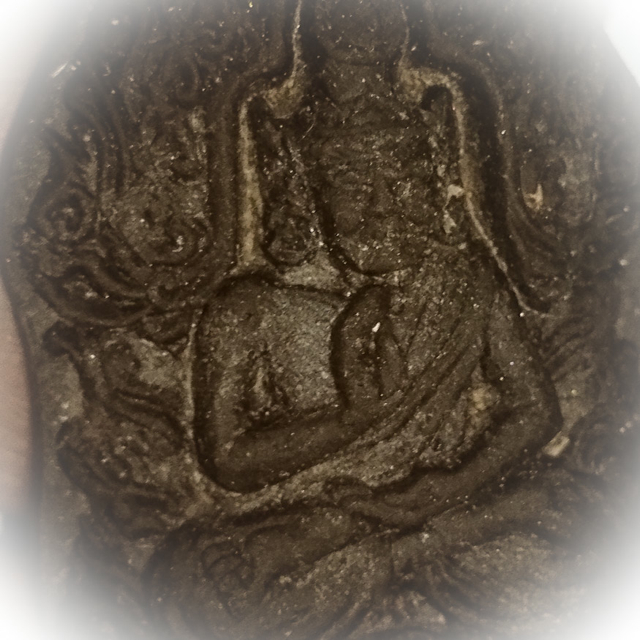 Above and Below; Macro Close up of Muan Sarn, and View of the Detail of the Amulet. 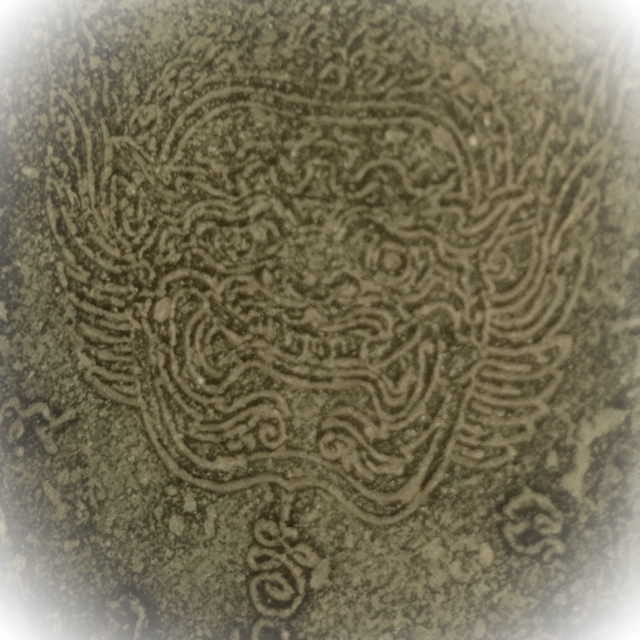 Above; Pra Pirab embossed upon rear face of amulet

On an Inner level, the Yogic ability and consciousness of the Mastery of the Inner Breath is achieved, and the portals to the four powers become open. Some Lersi may enter then on a secondary and higher path which goes beyond the 4 powers (Itiphada), and becomes the Magga (Path to Arahantship). The breath is air element within and without, and passes through us, empowering us with Life. Prana/Chi is the name of this power, and it is a central part of Yogic Practice, and the Key to Jhana Absorption Portal Access.

It is possible to evoke not only elements such as earth water fire and air, but also colors. Through Yogic mind development and the use of Kasin and Maha Amnaj (power), the Lersi have developed abilities such as being able to walk on the surface of the water (by evoking earth element into the water and transforming it to make it a hard surface over the spot where the Lersi is currently standing).

In the same way, one could also dive under the earth too, or float in the air, transport oneself instantly from one place to the other for example. This is probably what the ancient Alchemists (such as saint Germain) of the medieval Era were attempting to do. Other abilities achieved include divine ears and eyes (ability to see and hear things in other spheres/dimensions), read minds, and tell the future.

Of the Kasina Powers and Practices, there are ten different Kasina Objects of Meditative Focus;

Amulet comes with original box from the temple 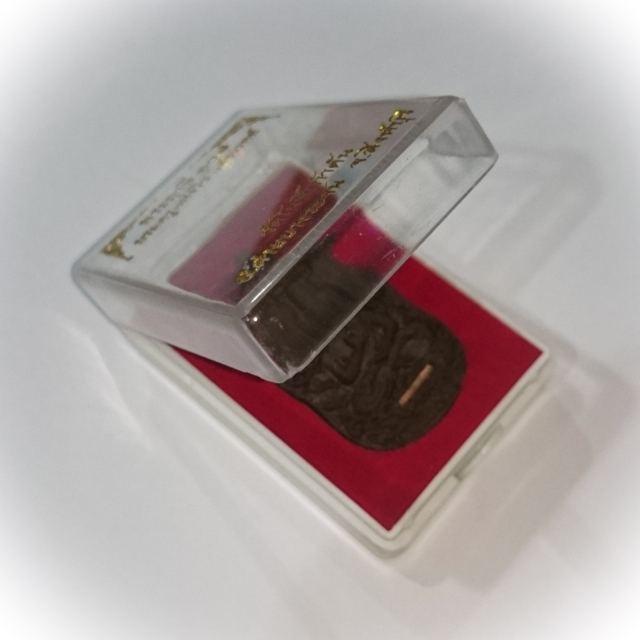 Chant 3 times on your knees with palms placed together, and bowing each time, with each palm to the floor and your outstretched thumbs touching at the tips, this leaves just enough space for the forehead to bow down and touch the floor between your two hands.

Then chant the refuge in the triple gem until entering Nirvana – chant with with hands raised in prayer, and bow after each line is finished;

Then you can chant all or any of the following Kata when and as you feel the wish or need, as additional Bucha

General Kata (Good for all Ruesi) 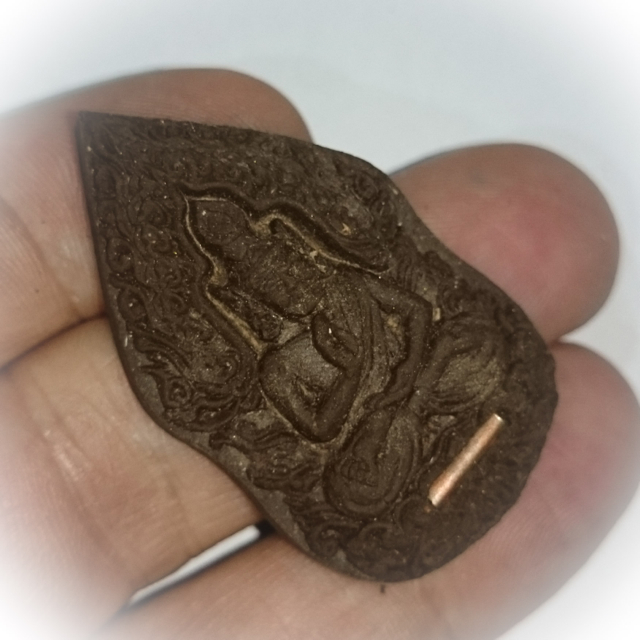