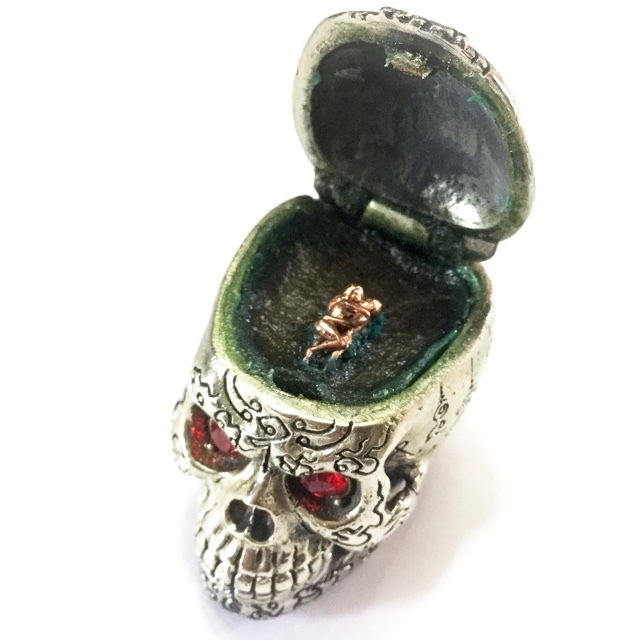 This special edition See Pheung Green Prai Oil Necromantic Potion, with In Koo Deva of Love statuette inserted, is packed within a Sacred Metal container with Pewter Plating, in the shape of a Hoeng Prai Grasip skull. The skull is covered with sacred yantra spells and Khom Agkhara lettering, with two red gemstone eyes glaring out. Released in the Sanaeh Saen Montr Edition.

This is a very special Nam Man Prai based potion Using Wicha Prai Grasip, and Wicha In Koo Maha Sanaeh - the Potion/Amulet is especially for gamblers and promiscuous lovers, and those who seek the forewarnings which come from the magical of Prai Grasip (Ghost Whisperer). 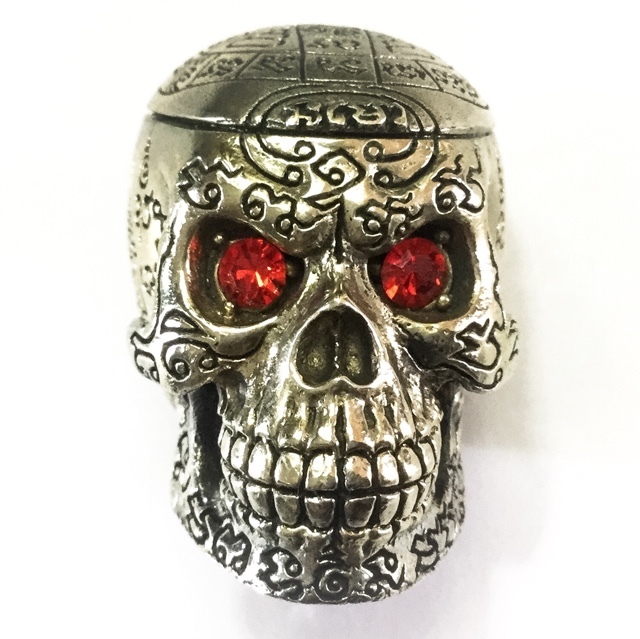 The Hoeng Prai Grasip skull is in itself an amulet, made from sacred chanuan alchemical brazen alloy, pewter plated, and embossed with Sacred Yant inscriptions covering the outer surface of the skull, which serves as the container for the See Pheung.

Some people do not use the potion, rather, leave it within the Prai Grasip skull. and wear it encased, as an amulet, without using the potion to smear. We have provided encasement options in case you prefer this method of use. 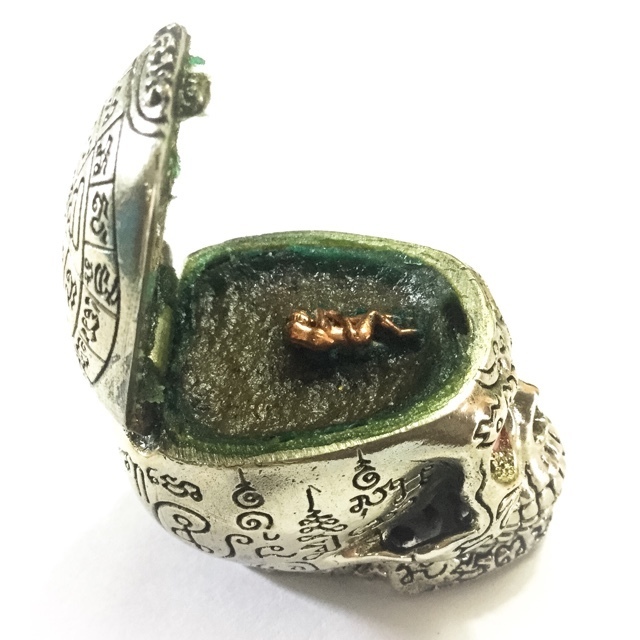 Within the See Pheung Balm Potion inside the Prai grasip skull, is an In Koo statuette inserted, invoked and empowered with the spirit of In Koo Deva of Love. The In Koo not only attracts admirers and serves as a seductive Mercy Charm useful for Social Climbing and Good Business. 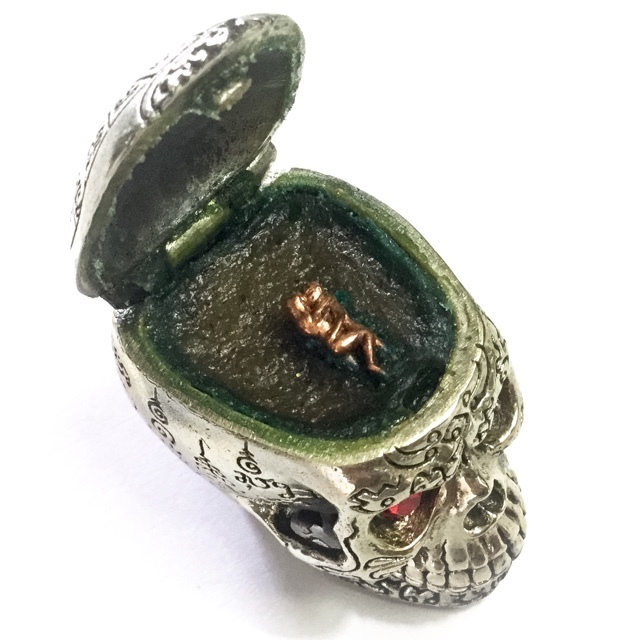 The In Koo is of course Primarily and Powerfully focused on the Power of Love and Passionate Mercy, which attracts, enforces and binds a couple to love each other and for the love to grow and strengthen constantly, binding the relationship into an unbreakable communion. The In Koo is pure Maha Sanaeh and Metta Mahaniyom Magick, to bring Lovers closer together, and to induce an intense Loving Relationship that is unbreakable. 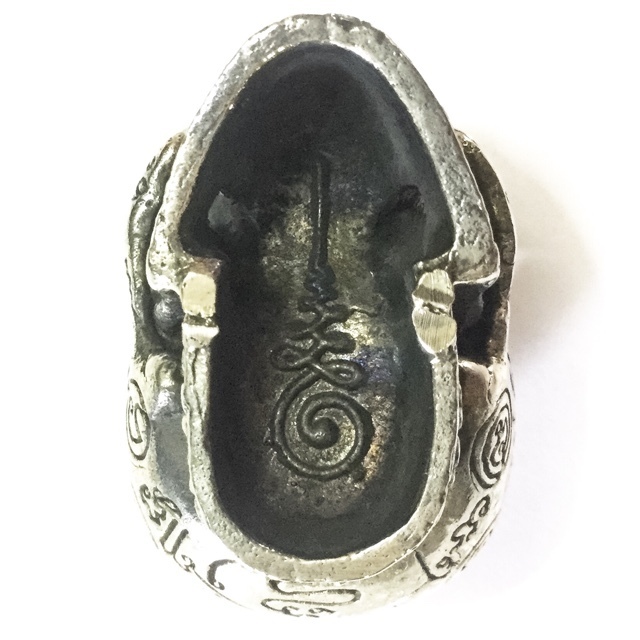 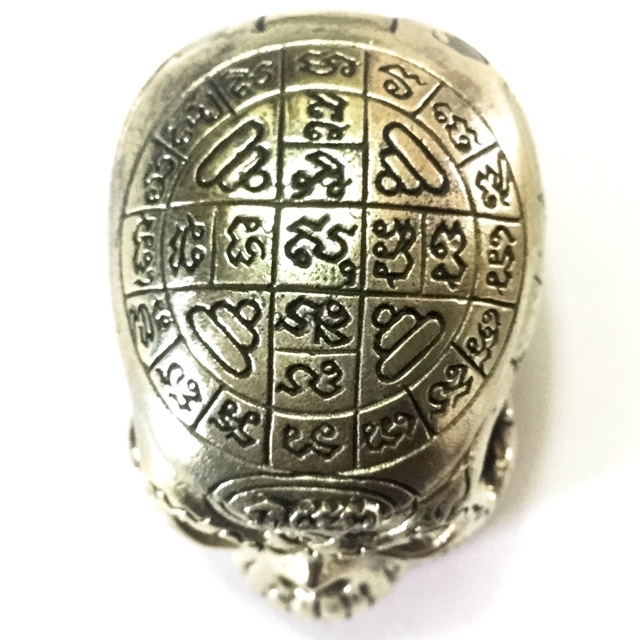 The Yant Maha Mongkol Long Yant See Pheung Yantra is embossed on the crown of the skull, for Auspicious Blessings, and is a traditional spell for empowerment of See Pheung Potions, usually inscribed within the cauldron too when boiling the potion. 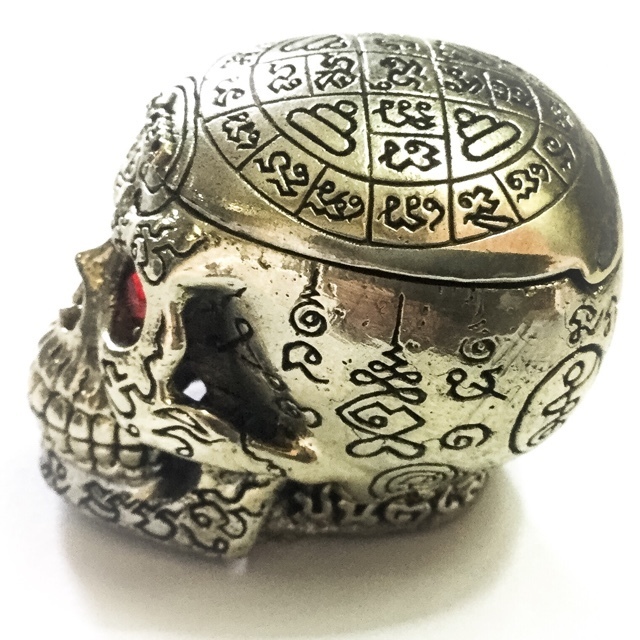 The Sacred Yant Dto and various Sacred Na, and Lanna Agkhara spells are embossed on the side of the Prai Grasip skull. The top of the skull fucntions as a hinged lid to open and access the See Pheung. 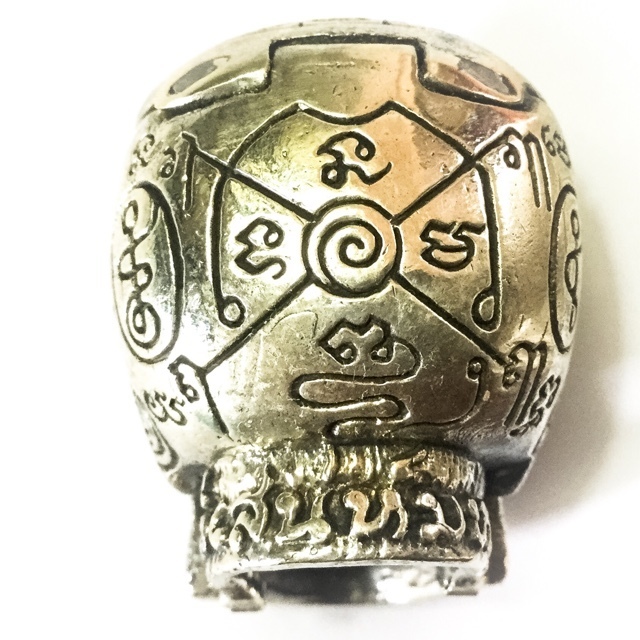 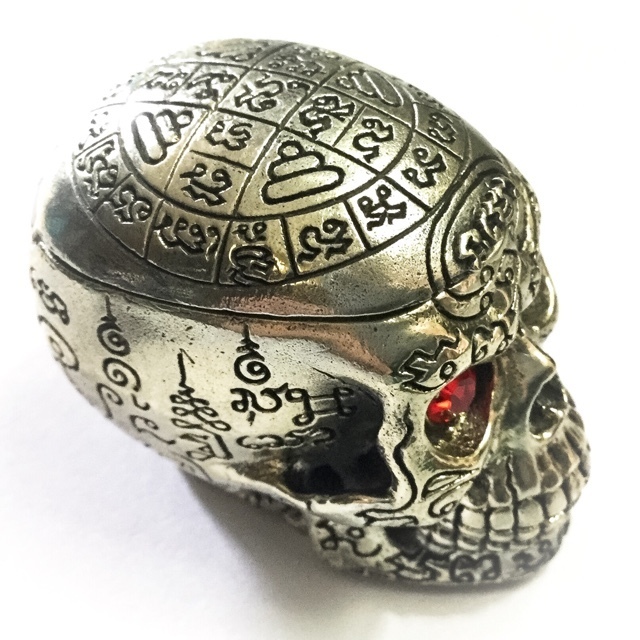 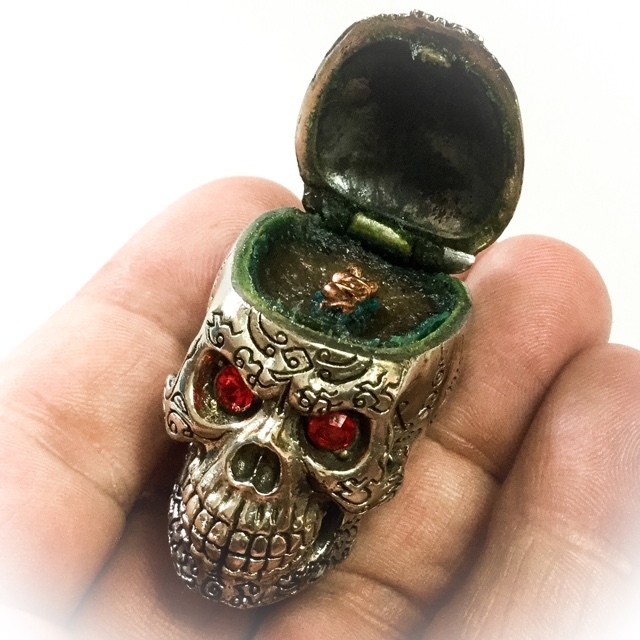 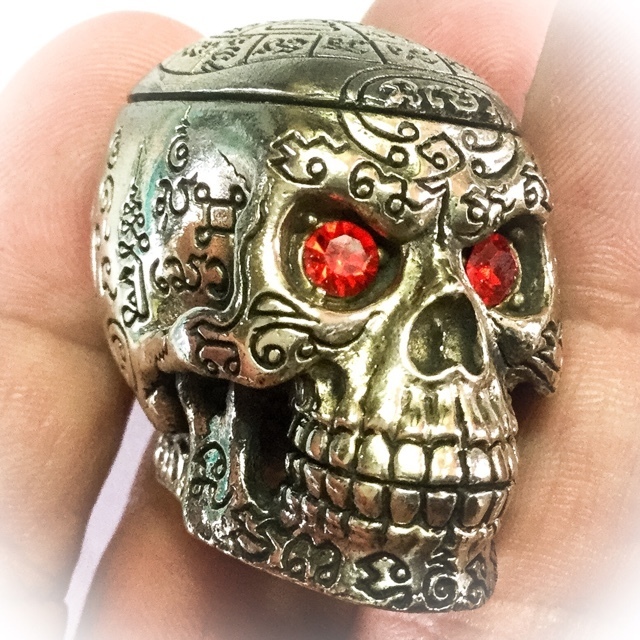 In Koo is also Kong Grapan – protective magic prevents ballistic weapons and sharp objects from piercing or penetrating the skin (this can be only expected to work in extreme circumstances, and with those who have meritorious Karma, or who the angels wish to protect.

But this can not be expected to work with those who do not keep the 5 precepts and assist the will of the heavens - Miracles such as Kong Grapan are not a common event, and are not to be expected to come easily). 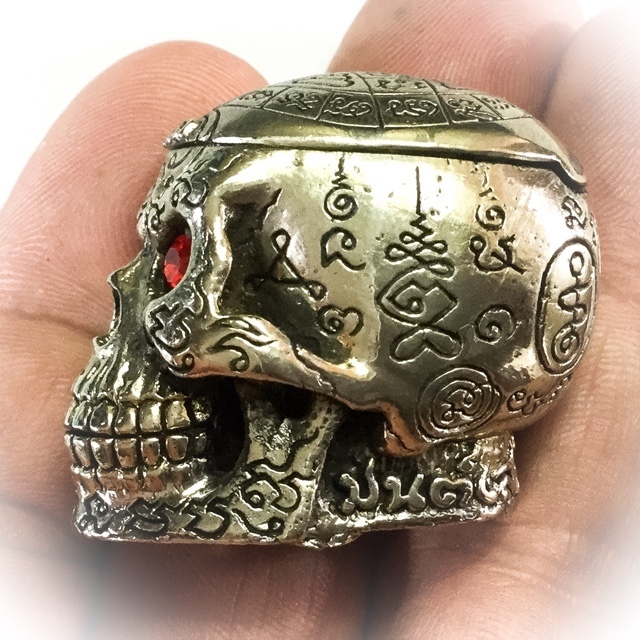 Gan Kun Sai – protects against black magic and evil spirits, defends against Hun Payont, magic spells and the like. The Prai Magic within the sorcerous earths and the spirits invoked from the Cētabhūmi Astral Realms will detect any evil curses or demonic entities, and fend them off with their own inherent Magical Power.

Metta Mahaniyom – Discussions, Debates and Business talks or Diplomacy matters will be discussed easily, and you will be able to get your point across and be convincing. 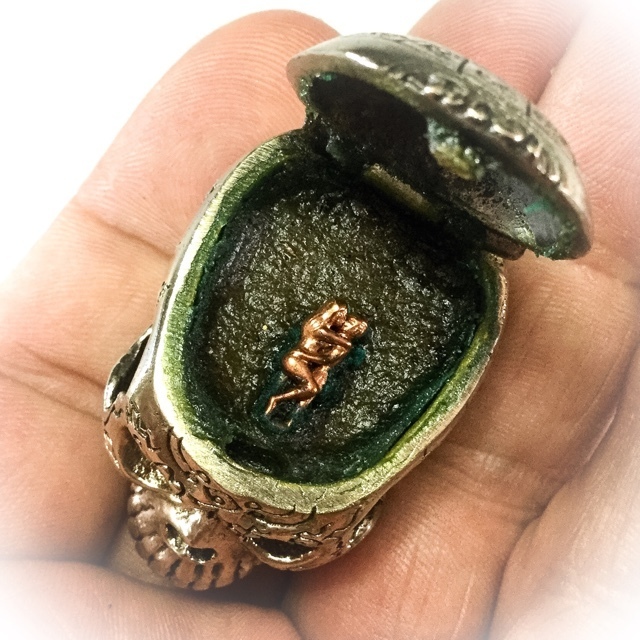 This is a Triple purpose, or at least, double usage method type Wicha, which can be used for Bucha placed on an altar, and/or for use as a See Pheung Balm for smearing as a Magick Potion, and can also be carried on your person or worn as an amulet, as a Prai Grasip Skull. 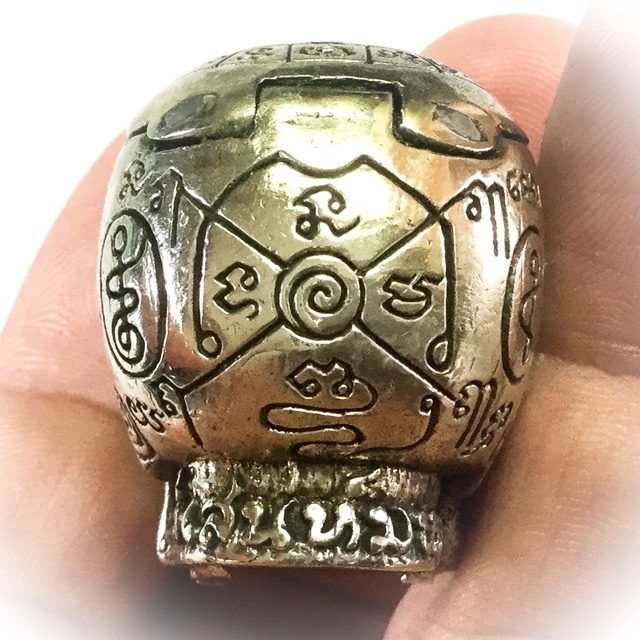 The Prai Grasip See Pheung are empowered using a host of magical ingredients for the potion, which were collected over many years by Luang Phu Kroo Ba Tamma Muni, and include some very powerful substances indeed; 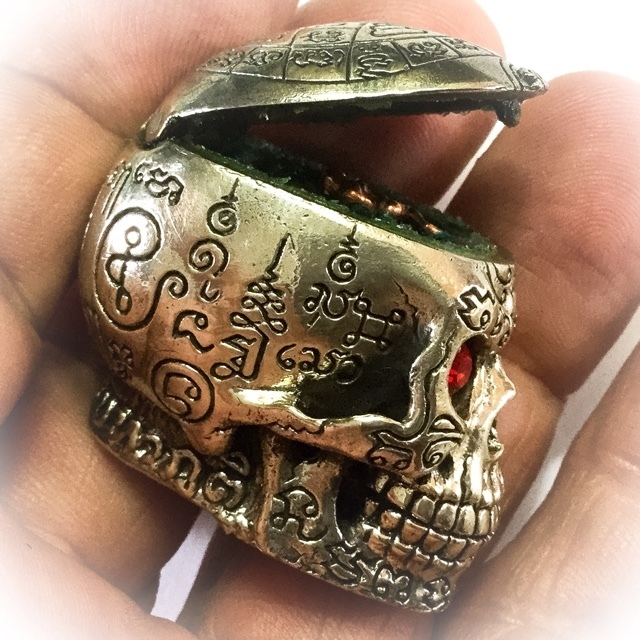 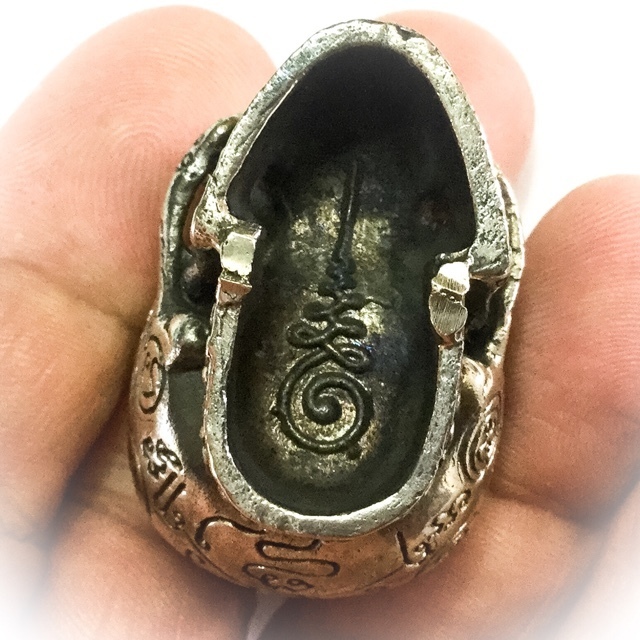 Luang Phu Kroo Ba Tamma Muni performed a very long formula of Incantations, chanting throughout the boiling session, stirring the potion with a magical wooden paddle, which was inscribed with sacred Khom Agkhara spells. The Invocation Summoning, Awakening and Turning of the Four Elements was performed to Reanimate Living Magic within the Potion, according to the Ancient Grimoires and Magical Formulas of the Wicha. 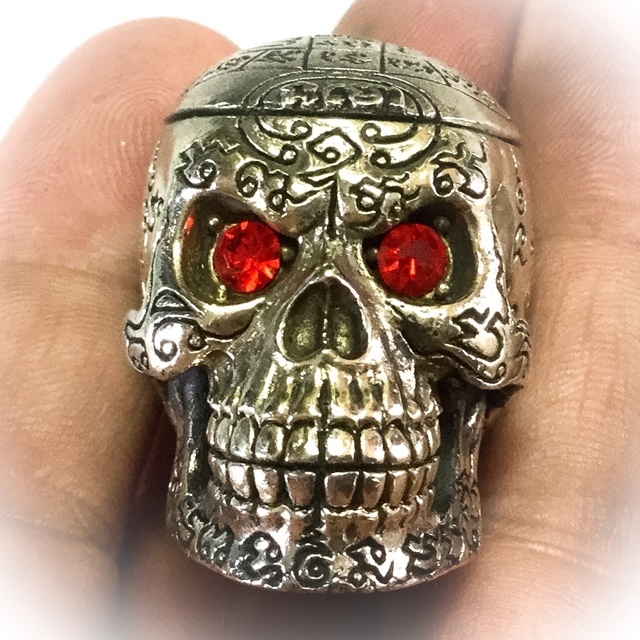 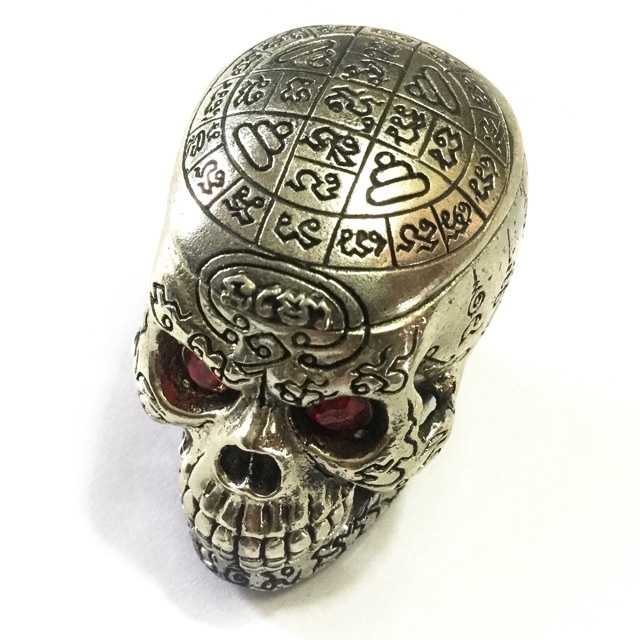 Many people feel the attraction and see the ease of use that Metta Maha Sanaeh Prai Oils, Balms and Powders bring, but do not really know how they can put the oils and balms to applied use for the right purposes. The below section explains a little about the general techniques normally applied when using Metta Oils and Prai Oils.

Smear a little between the eyebrows for Metta before starting work or going gambling, socializing etc.

Men should circle their left finger clockwise, and Women should use the right hand and circle the finger anti-clockwise

Use the forefinger to smear with almost all Metta and Maha Sanaeh Oils and Balm Potions, for General Metta Blessing, use the ring finger for Selling and Gambling

Use the middle finger to smear the oil if you wish to be attracting the opposite sex. 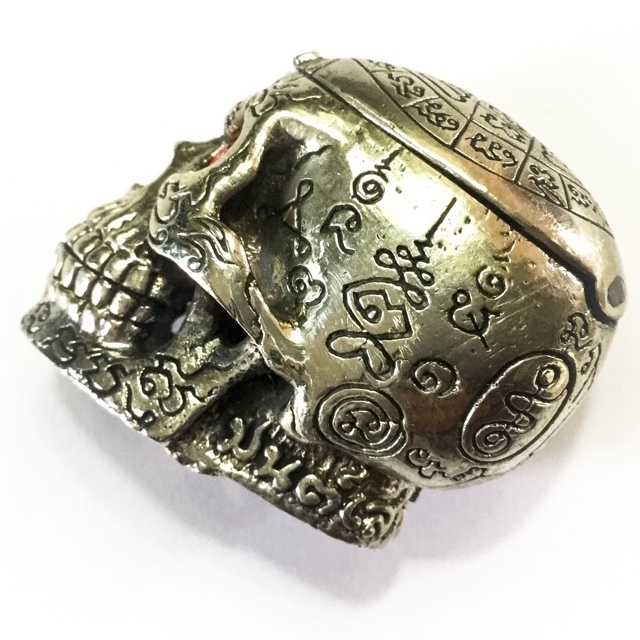 For Gambling; If an Oil is given for For Gambling Purposes, simply tap the See Pheung, Metta Oil or Prai Oil with your finger and make a wish before leaving the house. You can rub the balm into your skin of your gambling hand then, if your finger has some balm on it after tapping. Use only a tiny amount of balm is enough.

For ‘Jerajaa’ (business discussions, job interview etc), smear the balm onto your forehead and make your wish.

For Maha Sanaeh attraction, smear the balm under your chin, and ear lobes, and make your wish.

For Kaa Khaay (Selling Wares) – smear a little on your wares or the table where you sell them before each day begins and chant the Kata given.

For Mad Jidt Mad Jai (Enchant the heart and mind of another); smear or dab a tiny bit on the person and then perform the chanting of the Incantations given for the Oil, and focus on the person coming to you as your wish. 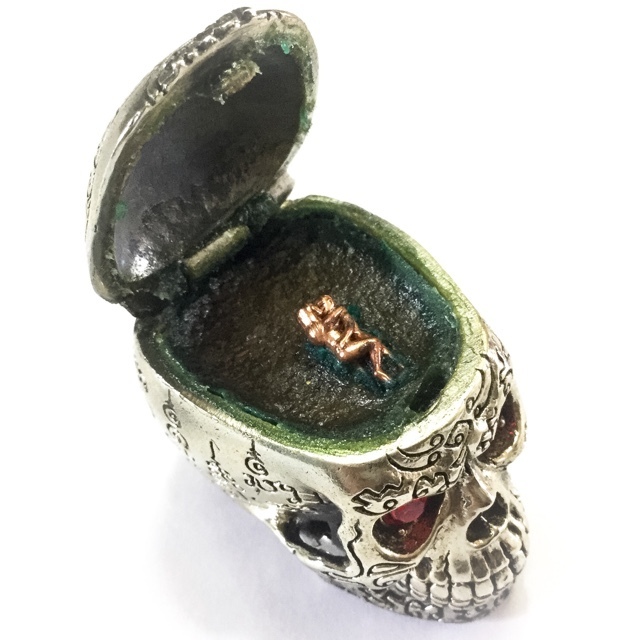 Use the thumb to smear around the outside of lips, if you wish to seduce someone of higher status or with high ranking, or profession.

Use the forefinger to smear around the outside of lips, when seducing your own age group or equals in social status, as well as your own employees.

use the middle finger to smear around the outside of lips, if you wish to seduce somebody older than you, or a widow or divorcee.

Use the ring finger to smear around the outside of lips, when seducing very attractive handsome people.

Use the little finger, to smear around the outside of lips, to seduce younger people 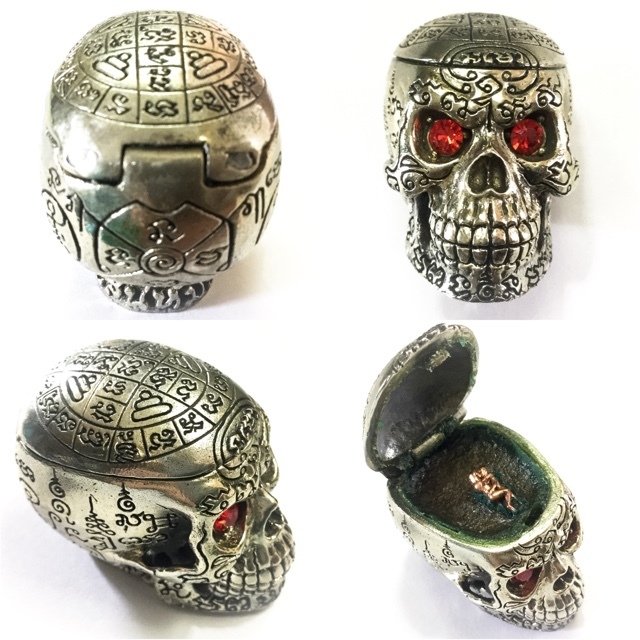 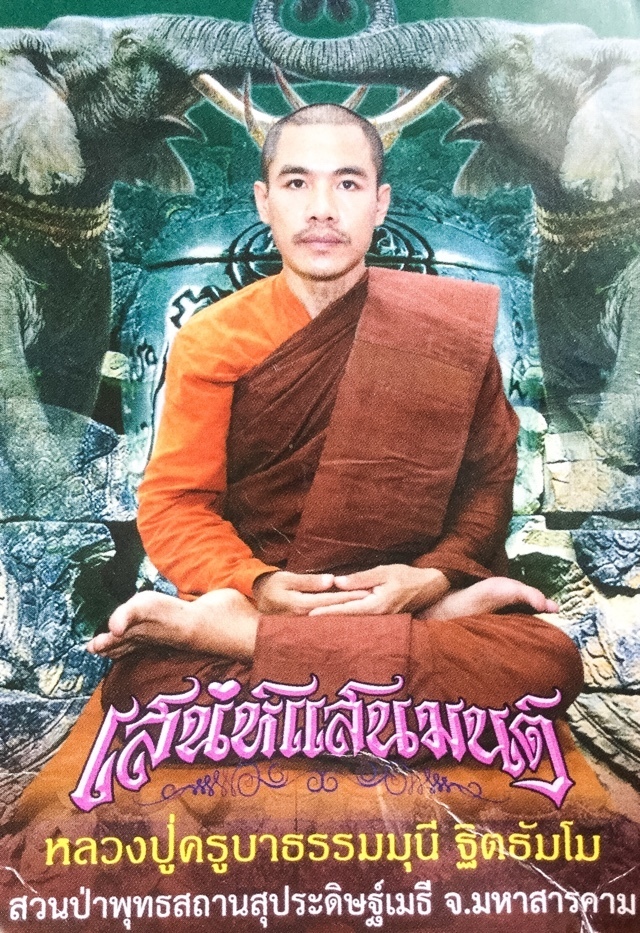