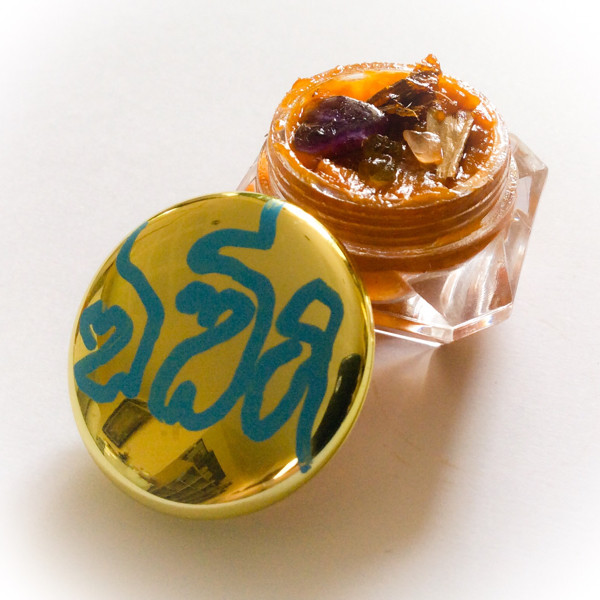 This 'Huea Chuea' See Pheung Nam Man Prai Maha Pokasap, contains an immensely rich and colorful quantity of Sacred Muan Sarn ingredients, which are of various natures Herbal and Magical, Necromantic and Buddhakun based ingredients. The see pheung is being released to raise funds for the building and consecration of a lifesize statue of Luang Por Phern, for the temple of Wat Ko Poon. 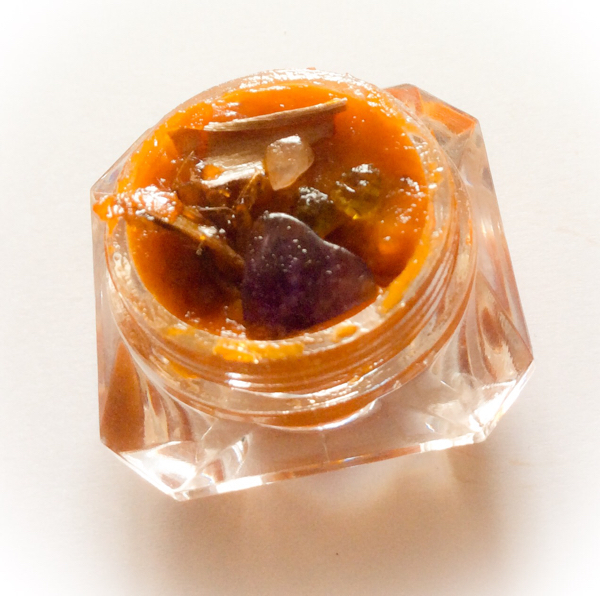 A large number of ancient amulets such as Pra Kong Chai Chum, Pra Nakprok Taep Nimit, Pra khun Phaen Awk Seuk, and a host of other famous Miracle amulets were also boiled within the sacred cauldron, which was inscribed with the Yant See Pheung spell beforehand.

The oils were then given a large addition of powerful herbal ingredients whuch were collected by and even grown personally by Ruesi Sam (Ajarn Spencer Littlewood). 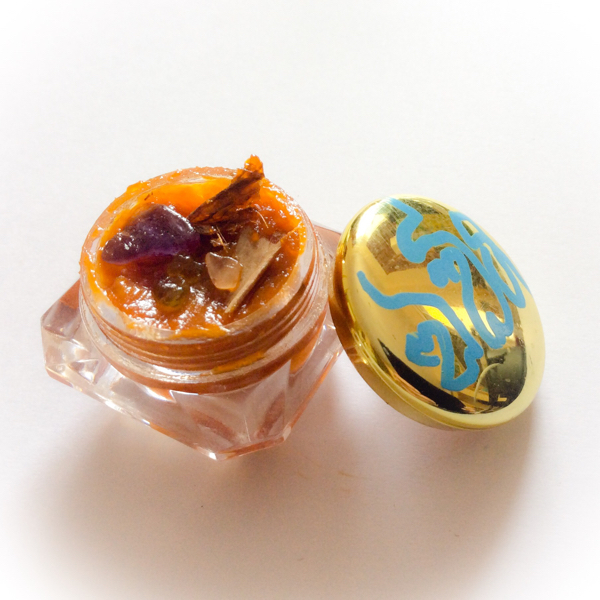 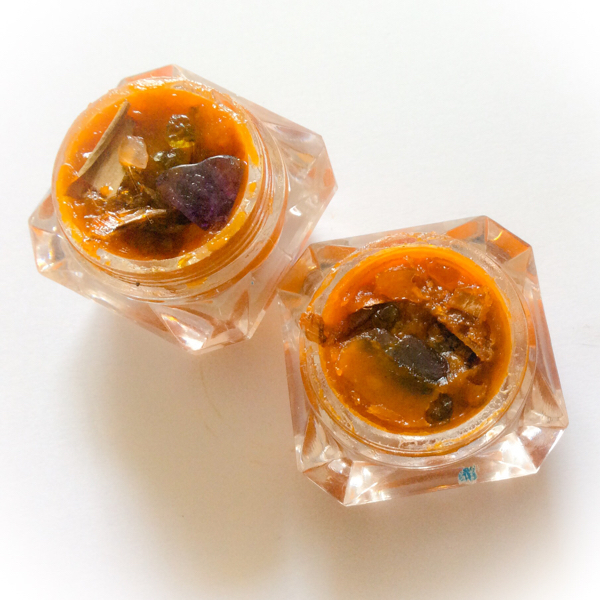 The See Pheung was boiled for hours thorughout the pertformance of Wai Kroo to the Buddha, the Devas and the 108 Ruesi Hermit Gods, at Asrom Por Taw Guwen.

Horoscope Improvement Magic Yantra Candles from Pra Ajarn Supasit of Wat Bang Nam Chon were added and burned thorughout the ceremony standing in the cauldron, and were slowly melted down as they burned, meltiing into the See Pheung Nam Man Prai Oil Maha Pokasap. The candles had a Yantra Cloth and Takrut within them which were then also boiled further in the oil and See Pheung paste.These items are part of the Luang Por Phern Statue Fundraising Project to Build a Lifesize Replica statue of the original Luang Por Phern at Wat Ko Poon for Luang Pi Pant.

All money received from sales of amulets in this Fundraiser Category, will be used to finance the creation of a life-size statue of the great Sak Yant Master, Luang Por Phern Tidtakuno of Wat Bang Pra. The is to be installed at Wat Ko Poon, in honor of Luang Por Phern.' 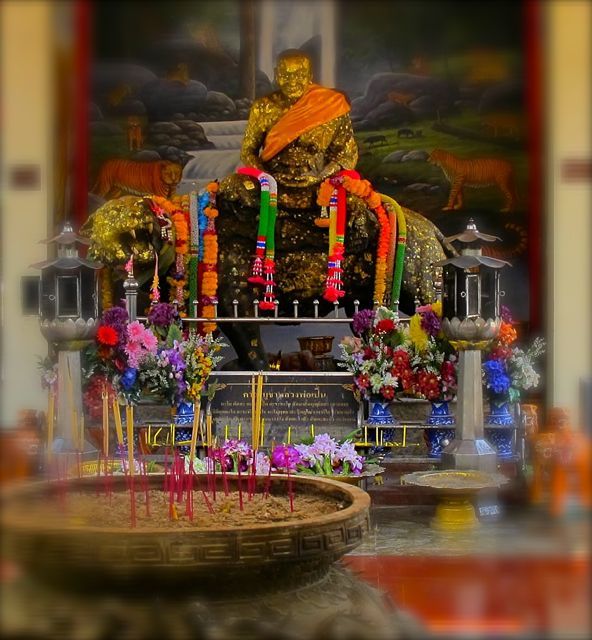 The statue is a Merit Making Gift for Luang Pi Pant, who is the True Living Direct Lineage Transmission Adept of Luang Por Phern, and who continues the Wicha Sak yant of Luang Por Phern (Wat Bang Pra) adhering to the conservation of his Formula of Sak yant composition and empowerment.

The project is financed by Ajarn Spencer Littlewood, and the Sak Yant Foundation Project. Supported and Sponsored by Buddha magic TV in exchange for DVD footage for the coming DVD productions 'Sak Yant the Movie' and 'Buddha Magic the Movie' 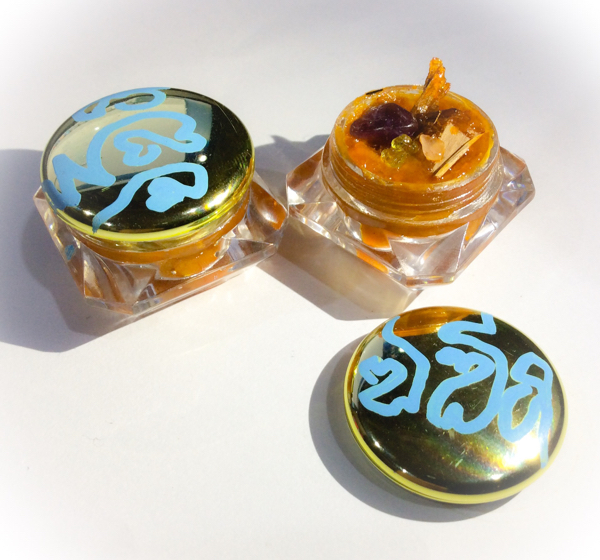 People who donate through purchasing items within this category, will have their names inscribed upon a sacred Yantra Foil, to be smelted into the Sacred Chanuan Muan Sarn Sarn used to cast the statue. The statue will be installed at the temple of Wat Ko Poon and its eyes opened with Consecration ceremony at the temple. The smelting and empowerment will be filmed and published on the Buddha Magic TV Channel after its installment at the Temple, and presentation to Luang Pi Pant. 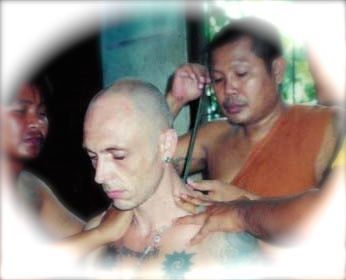 This See Pheung is extremely concentrated Balm and should not be rubbed on the skin unless it is diluted first (aromatic oil or lip gloss is a good medium for dilution). In its usual state of dilution this lid of See Pheung potion would be at least three times as much. It is the pure concentrated formula (Hua Chuea) straight from the cauldron.