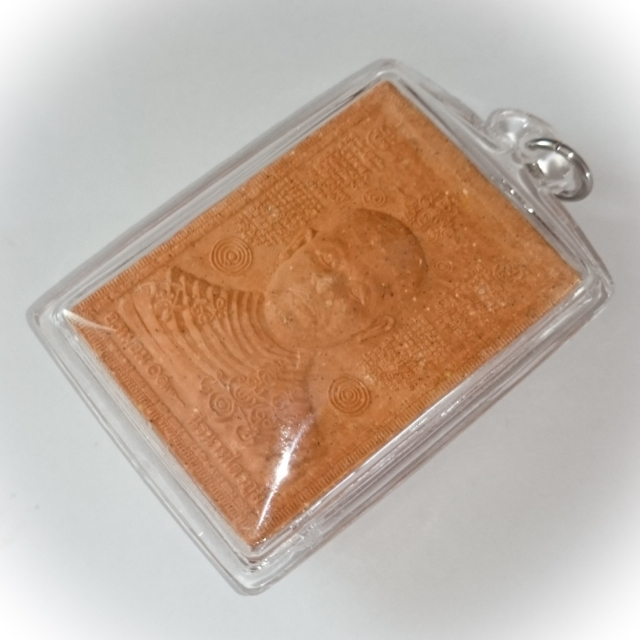 Sacred Prai Maha Sanaeh and Maha Lap Powders, with Powdered Lek Lai are the maiin Muan Sarn ingredients of the formula for this Sacred Powder Pim Yai large size amulet, which is two sided in its design, with a Camaeo of Ajarn Hmom Niranam Traipum on the front face, depicted in Monk's Civara Robe, which is a Cameo taken from during the time that Ajarn Hmom was Ordained as a Buddhist Monk (Bikkhu).

The amulet is a 'Pim Yai' (Large Size Model), and is made froom orange coloured 'Nuea Pong Prai Som Luan' - the word 'Luan' means 'pure' or 'undiluted', and refers to the fact that the powders used are pure and undiluted Prai Powders. This can be seen in the extremely fine grains of the powders used which are so finely ground and have no rough elements in them. 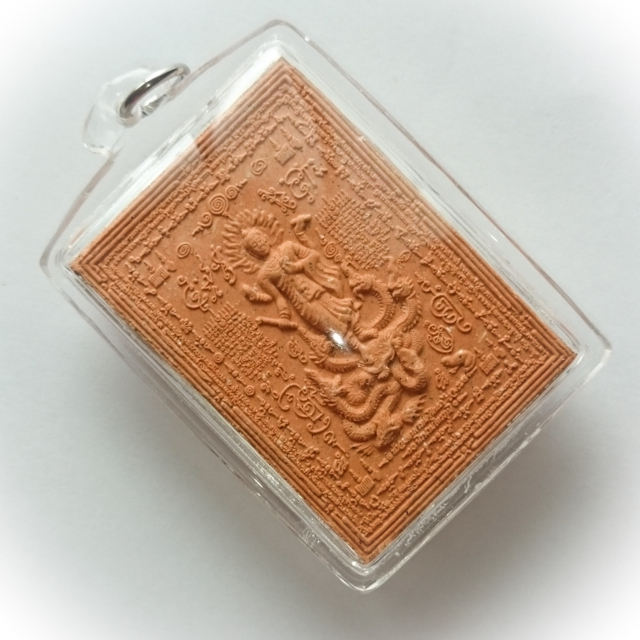 The rear face has an image of the Lord Brahma Chinabanchara (Taw Maha Prohm Chinabanchorn), who is standing on a bed of Nagas as he rides along. Both sides of this special limited edition (and now truly rare) amulet, are completely covered with detailed embossed inscriptions in Khom Agkhara and Sacred Yantra Spells. 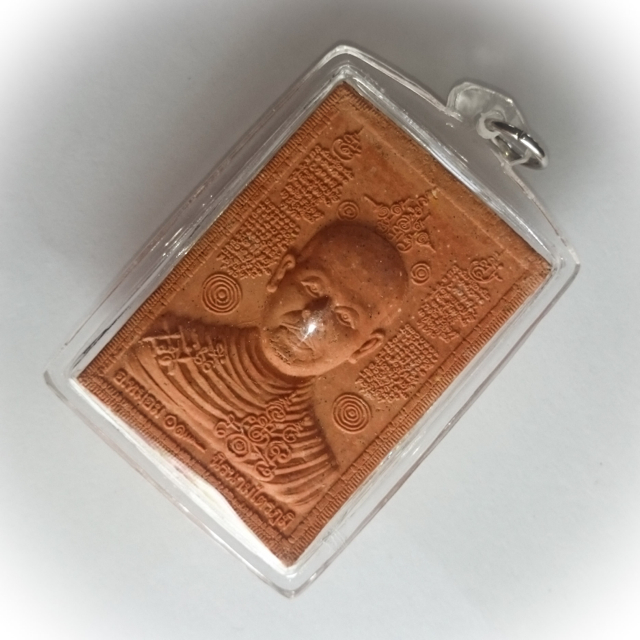 Lord Brahma Chinabanchara is not just any Brahma dseva. The Brahma Worlds have as many Brahma Beings as there are grains of sand in the ocean, but only a few of them have high status above other Brahmas. Of the four highest status Brahmas, Taw Maha Prohm Chinabanchorn is one of the four. 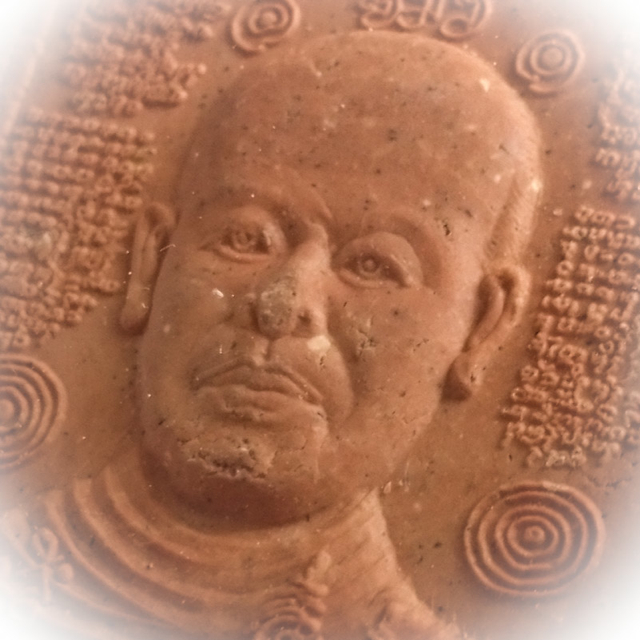 Above and below; Macro Close Up of the Muan Sarn Powders on the surface of the amulet. 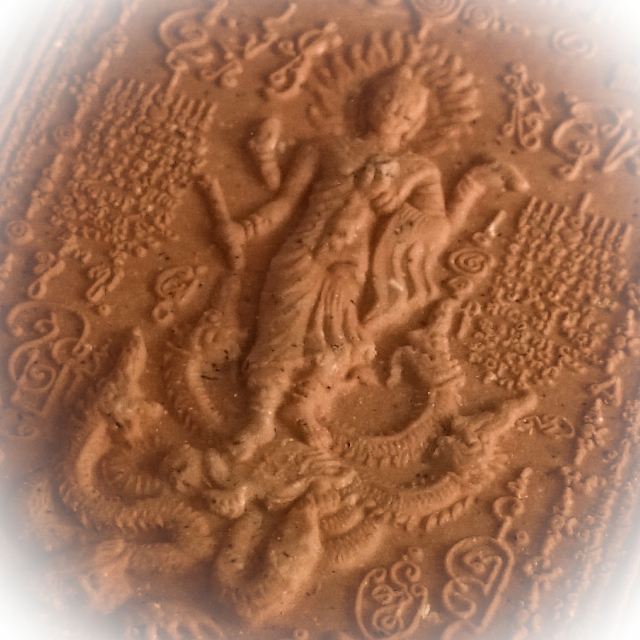 This edition of amulets saw over one hundred Great Master Monks come to the Ceremony to perform Buddha Abhiseka, after Ajarn Hmom opened the Ceremonial Rites with the Invitation of the Devas and perfomance of Wai Kroo. The Buddha Abhiseka was a very large ceremony indeed with the presence of over 100 meditating monks to perform their blessings along with the psychic empowerments of Ajarn Hmom. 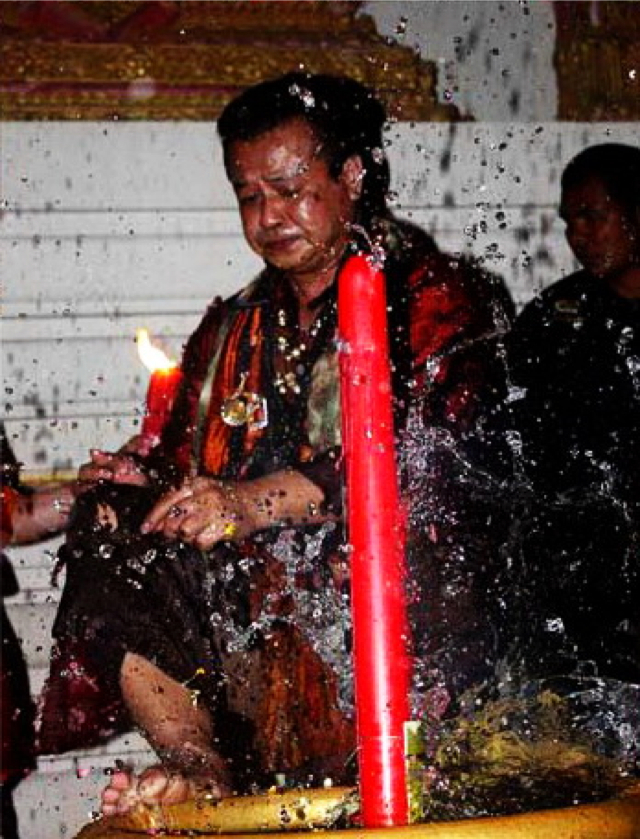 The amulets of Ajarn Hmom, are extremely heard about, popular and rare to acquire, due to a large amount of extremely noticeable effects coming from devotees who have rented and made Bucha to these amulets. His amulets are made in very small numbers, and are extremely difficult to find and acquire. Mostly, all of his editions end up completely sold out soon after release, and only once in a while does one get the chance to find one available.

Ajarn Hmom is not a name that is heard of on the common popular amulet circuits, but in fact he is a Cult Status Famous Master with those in the know. He is a kind of trade secret, that this Master with incredible psychic powers and Magical Wicha, knows how to make truly powerful and really effective love charms and riches amulets. 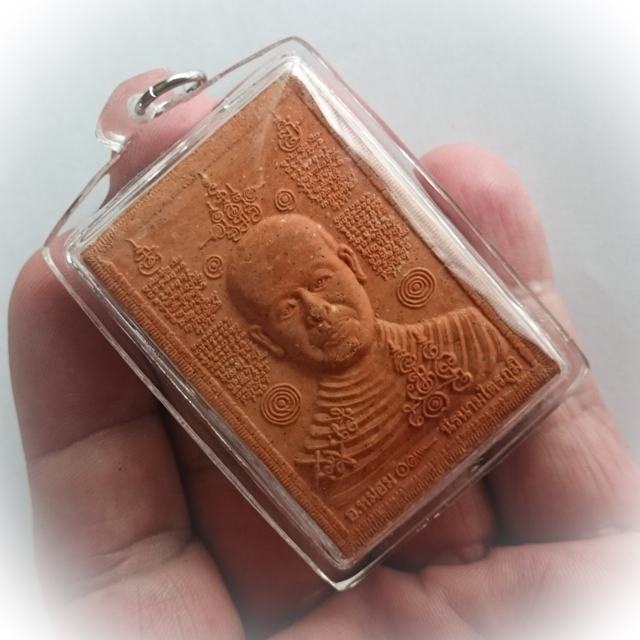 This master has become an impossible to find reclusive master, who is only ever really heard of after he releases amulets, most of which are nearly always to raise funds for a temple, or some other great cause for the preservation and perpetuation of Buddhism. He remains reclusive and does not make a show of things when he is not actively making and empowering amulets. Despite his obvious intention to avoid fame seeking, and his reclusive manner, he has ascended to the status of the Top Ten Adept Masters of Wicha Saiyasart in Thailand. 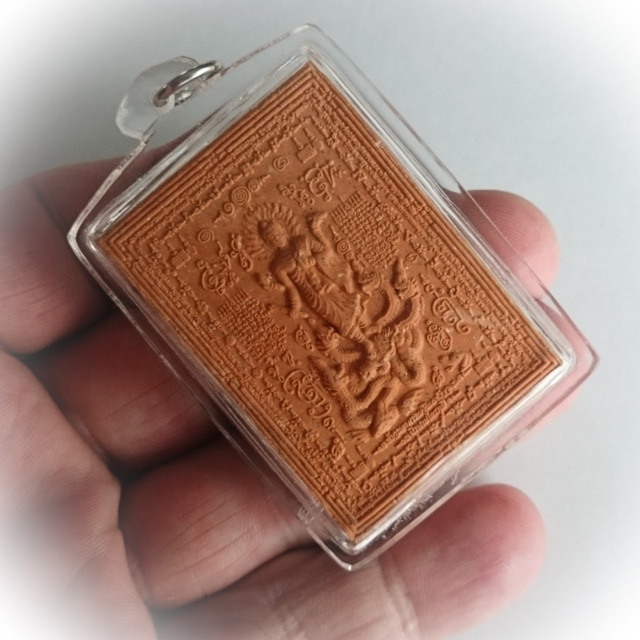 His Wicha is reminiscent of the great Ajarn Chum Chay Kiree, whose powers were undoubtable (due to public demonstrations with guns and knives to test the power, which left everyone believing in what their own eyes had seen).

This Cameo/Deity amulet is made from Sacred Prai Powders, which uses Saiyasart (Thai and Khmer Sorcery) of the Metta Mahaniyom, Donjidt Donjai variety, which is extremely effective for both social and professional success and popularity, as well as a potent Mercy charm or attraction talisman for improving ones love life and increasing lovers and admirers. 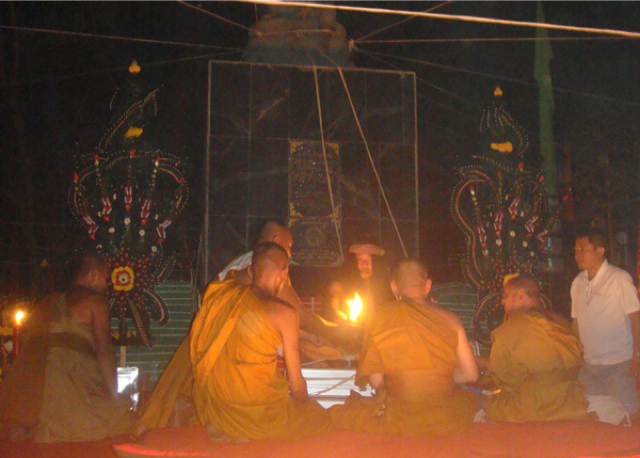 It is also good for oratory skills so people such as politicians, advisors, consultants, salespersons, market stall holders, teachers and the like will benefit greatly from this kind of magic. It protects against Black Magic and Curses, and the meritorious Brahma Being who patrons the amulet clears the way (future) of unneeded obstacles. 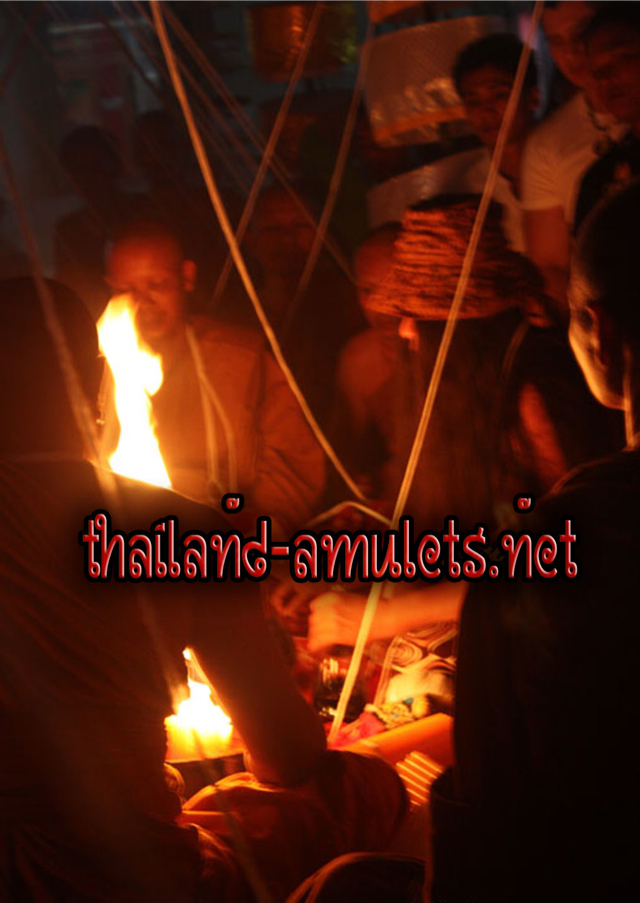 Taw Maha Prohm Chinabanchara is full of Puttakun and Metta; Whoever may be angry with you will return to being friendly, people who planned ill against you will want to help you instead. Enemies become Friends, The power extends so far that it is extremely effective for salesmanship, and will make customers be very friendly and polite and generous. 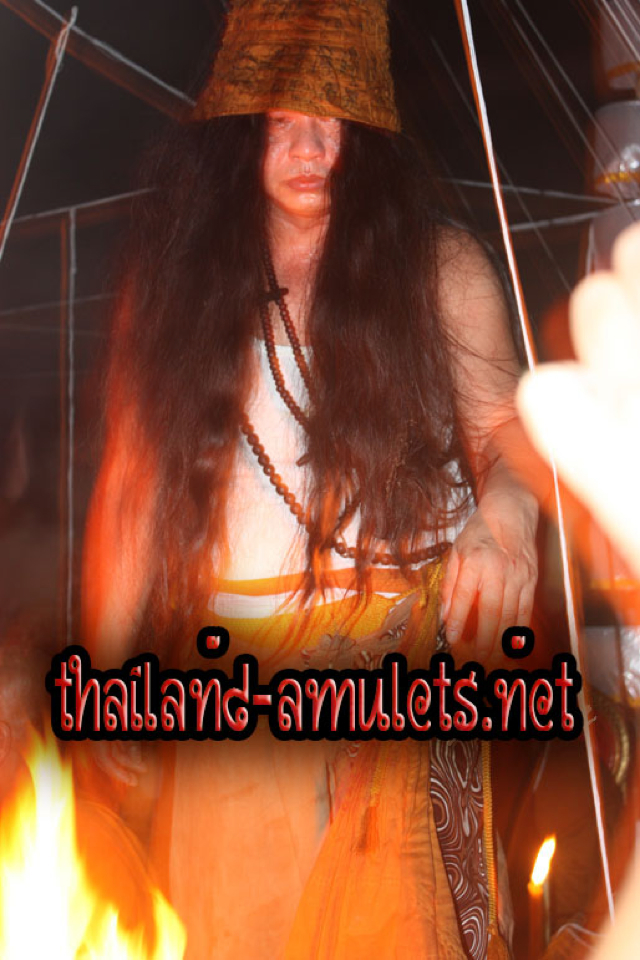 Prevention of magical attacks is also a powerful ability which this amulet possesses, evil eye, love spells, and other harmful magic will be pushed away, and eveil entities will not be able to approach because of the aura of Metta radiating from the amulet. 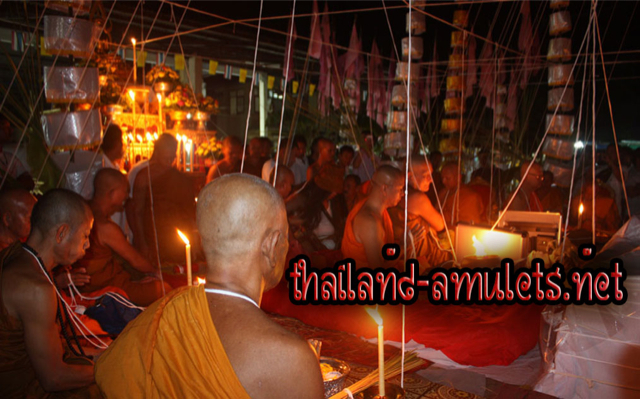 A Classic Essential Rarity, and a Powerful Amulet of the Mercy Charm Category of Amulets, from Ajarn Hmom, and a rare chance to obtain one of his Rare Sacred Amulets for Yourself. Just to Own an amulet from Ajarn Hmom, is a Status Increase in Itself, for not everybody gets the chance to own or wear one. 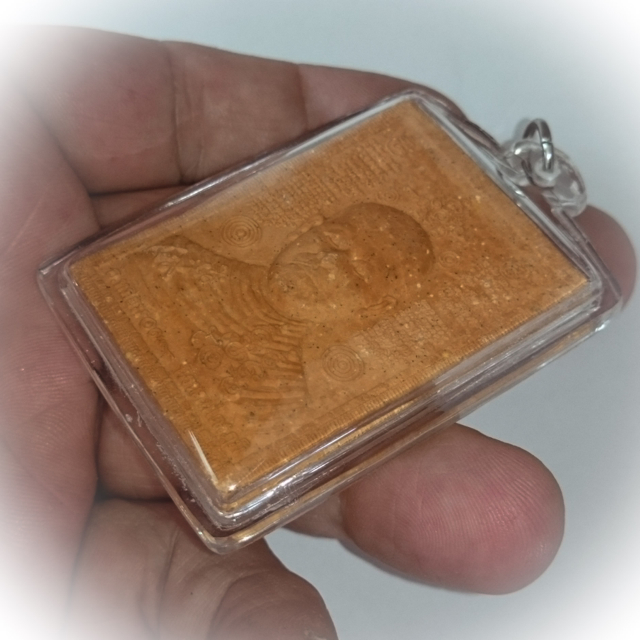 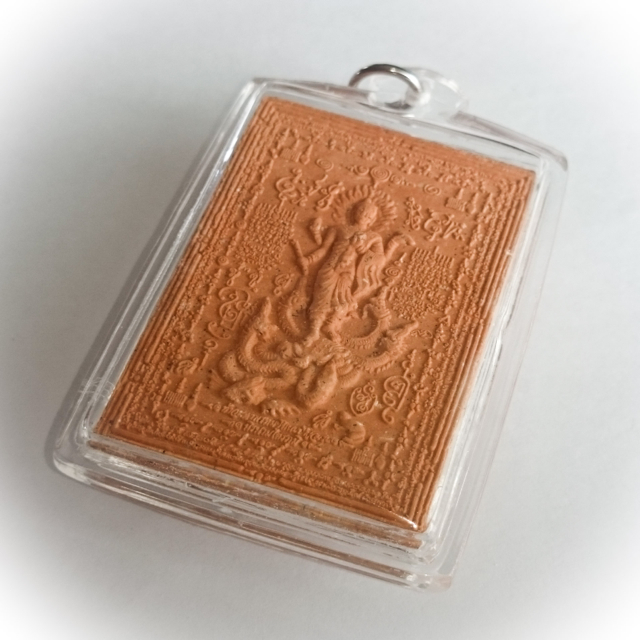